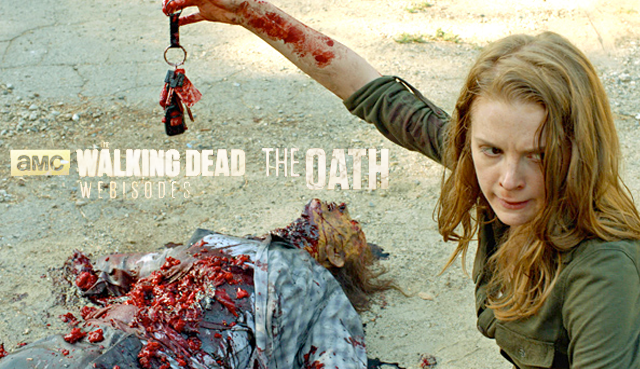 If you need your walker fix before the Season 4 premiere on October 13th, head over to AMC.com and AMC’s YouTube Channel for the three-part web series “The Oath.” Given that the last two seasons of AMC’s “The Walking Dead” webisodes have won WGA, Streamy and Webby awards, we’re pretty excited to see what’s in store for “The Oath” on October 1st.

In the three webisodes, which range from 7 to 10 minutes each, two lone survivors race across the countryside in search for aid as one of them slowly bleeds out. It’s both a blessing and a curse when they finally find an untouched hospital, whose seemingly benevolent doctor may hide a dark agenda.

Greg Nicotero, who returns to executive producer and direct, promises this set of webisodes will be even more ambitious and gripping than the last, with production values and makeup that match the show. The cast includes Wyatt Russell (Coyboys & Aliens) as Paul, Ashley Bell (The Last Exorcism) as Karina, and Ellen Greene (Little Shop of Horrors) as the mysterious doctor.

“The webisodes give us a unique opportunity to see other parts of the ravaged world of ‘The Walking Dead’ while weaving in and out of our show,” Nicotero said. “The crossover between ‘The Oath’ and ‘The Walking Dead’ ties in one of the most iconic images from the series, and gives us insights and history to yet another timeline. I had worked with Ashley on ‘The Last Exorcism’ and brought in Wyatt and Ellen, who rounded out the brilliant cast perfectly.”

If you’re not up to speed on the previous webisodes, you can check out the full list here.

So what do you think? What’s the iconic image that Nicotero is hinting at? Do you think the doctor might be a character we’ll recognize? Let us know in the comments!

EDIT: The Oath is now online! Check out the links below to watch it on AMC.com