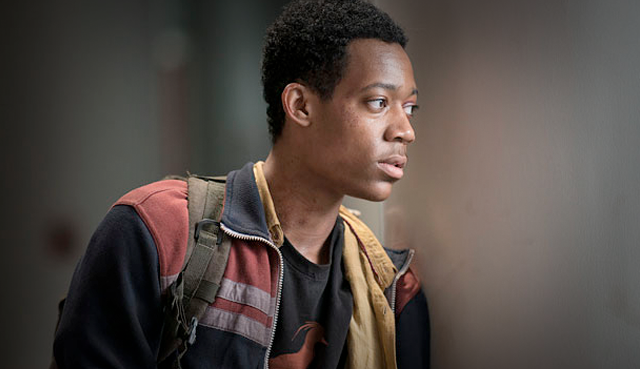 Only proceed if you’ve watched past The Walking Dead episode 514!

Phew! Anyway. EW interviewed Tyler James Williams about Noah’s (SPOILERS) demise, the glimmer of hope at the beginning of the episode, what what is was like filming in the revolving door. Now take a deep breath, and read on:

EW: So, how did you get the grim news about Noah’s demise?

TYLER JAMES WILLIAMS: You know what’s interesting? I called it ahead of time before anyone told me. So I had read the script for [a few episodes back] and I noticed there was something that Rick did that I don’t think actually made it into the episode that was a tip-off, and I was like, “Oh, I’m going. I’m done” in that episode. I think it was where we first all get into the house in Alexandria and we’re sleeping. And in that script, Rick was supposed to lay a blanket over Carl and kind of tuck him in. But in that moment he also lays one over Noah. And I went, “Oh, that’s it! I’m done! I’m gone. That’s it.” So I had kind of spread the rumor around set, and I was talking to Norman about it quite a bit and he was like, “There’s no way. You haven’t been here long enough yet.” I said, “Watch, that’s it.” And then when [showrunner Scott] Gimple called me, I was like, “Yep, I had a feeling.” And then he calls everyone else up to let them know, and they were like “Yeah, he knew. He was already saying it.” [Scott] said that had nothing to do with the death but for some reason that was the tingling in my spine—it tipped me off.

Your Spidey sense was tingling.

No one has had a great time in the zombie apocalypse, but Noah’s story seems especially tragic. He goes back to help Beth get out of the hospital, she dies. He returns to his home and is distraught to see his family gone, but Tyreese gives him a pep talk, and then Tyreese dies. And now he gets eaten in a revolving door due to no fault of his own, but a cowardly move by Nicholas. That’s a pretty raw deal, man.

It is. You know, what I loved about Noah is there was nothing that he actually did wrong. He was just getting terrible breaks in the world. And I think that’s something that we don’t see often in this world. There can be great people with great intentions who don’t really do anything wrong on their own, and stuff just isn’t working out. And that’s what I thought was kind of beautiful about him is that he got brought into this terrible situation like everybody else did. And as he met these people and they kind of became a family, the way they became family is when other family members of theirs died. In [episode] 513, there’s a whole bit where Maggie and Glenn come up to Noah and say, “You’re family.” But the only way that he became family to them was because Beth died—her actual family. So there’s this whole interesting dynamic with Noah being in the midst of terrible things happening, but still having that glimmer of sunshine that ultimately just doesn’t work out. But I thought that was a beautiful way to tell that story.

Oh, yeah, there’s a lot of smiling at the top of the episode and that’s when you know something bad is about to happen. Whenever people appear happy and hopeful, somebody’s about to eat it.

On one hand I’m sure as an actor it’s great to get a big, heroic death scene that you can hang your hat on. But on the other hand, even though this death is not that, it must be nice knowing that this is a death that’s going to move the story in a big way.

Yeah, we’ve spoken about this before. I was a fan of the show, so it was weird reading these scripts. Being the person who’s in Noah’s cheering corner the most having been him—I love him. I really want the best for him. But being a fan of the show, I was like, “You’ve got to go.” He’s an omen, essentially. He’s got to die. But one of the things that’s really interesting—having gone through the death and all that—is that it allows me to be a fan of the show again. And I know it’s gonna propel huge storylines. Which is so exciting being a fan again, like with Steven and Glenn—this is going to propel something huge for him. Because Glenn has never lost anybody that closely before. He and Noah were similar in that way. They were the two who kind of showed up into this group without a family. So for [Glenn] to lose him that closely, it’s just going to send him on this incredible journey I can’t wait to see.

And check out Steven Yeun’s interview about Episode 514 right here!