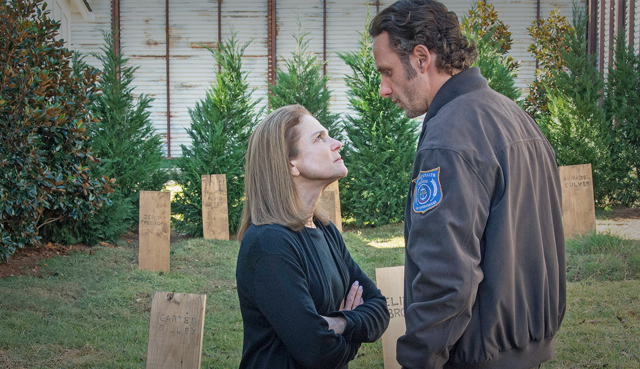 Tovah Feldshuh on the Deanna-Rick Relationship

Anyone up against Rick is usually the enemy–but Deanna Monroe’s relationship with Rick is a bit more complicated. Tovah Feldshuh (Deanna Monroe) talks to Dalton Ross (EW) and Jessica Shaw about everything leading up to the Season 5 finale:

(Spoilers for Episode 515, because this interview was conducted shortly BEFORE the finale Ep. 516)

DALTON: Last time we spoke you were in Tanzania about to climb up Mt. Kilimanjaro.

TOVAH FELDSHUH: That decision was made after the conclusion of filming season 5. I think The Walking Dead is so successful because it gets down to the bone of really being alive—what it means to exist with guns at your head. What does that existential threat feel like when it really feels like that? Rick and the great Melissa McBride who plays Carol, Norman Reedus…They get inside the walls and they say, “Are we being weakened by this? Are we being trivialized?” Little Chandler Riggs, who plays Carl, doesn’t wanna play video games. Why does he need to play video games about violence? He has lived it: He had to kill his mother! They’re already in posttraumatic stress syndrome. That’s why Rick loses it last Sunday night. He lost it.

DALTON: What’s so interesting, too, is that usually anyone who has been against Rick is the enemy. But Deanna is someone that viewers are learning to love and she seems like such a competent, strong—in a different way—leader. Now people are wondering who is right in this situation.

The thing that unites Rick and myself—not to mention, I love Andy Lincoln. He’s one of the great human creatures of the planet. He is kind, he is good. He’s the head of a series. The way he and Scott Gimple behave sifts down through the entire community. It is the kindest set I’ve ever been on. It is the most generous set, loving. You join that club and they say, “You’re doing great.” But Rick and I share one incredibly important pillar: that community is fundamental to existence, to survival. Therefore, I want his brawn. I want his muscle, his military savvy, and he needs my civilization. I’m offering him sleep, I’m offering him a nap, I’m offering him a babysitter and structure. I’m offering him an exhalation from the fear of death. And he’s offering me the potential to survive for a very long time because they understand how the workings go outside the walls. And when I violate that, either with my son or with Nicholas, we get in big, big trouble.

JESSICA: That scene at the end when Rick’s losing it and waving the gun at people. That scene is so intense. What was it like shooting that scene?

Every scene shooting with those actors is—the word isn’t easy but in essence it is attainable because the actors are so committed. Andy Lincoln never lets up—I’m talking between takes. I actually was with him in London last week, it was the first time I heard him speak with his own speech pattern. When he’s on set, he never breaks his speech pattern. He’s always speaking in a slightly southern drawl. So it’s just a privilege to be with him. He also takes his time in front of the camera so the camera can see process. You know, you have to have a clear mind. You can have a still face but you have to have a clear mind because the camera moves into the eyes of the actor and the thought of the actor. It’s been a wonderful journey.

The scene was difficult. They were all over the asphalt and they never gave up. Whatever the director wanted, it was 100 percent committed. The question is whether Rick and his pirate troop will thrive inside the safety of Alexandria or inside the trivialization of their lives inside Alexandria. Does it weaken them? Does it strengthen them? No question, as long as I can keep them civilized and have their guns outside, they’re a great asset.

Home | The Walking Dead | Tovah Feldshuh on the Deanna-Rick Relationship

AIR Gets a Release Date!!!