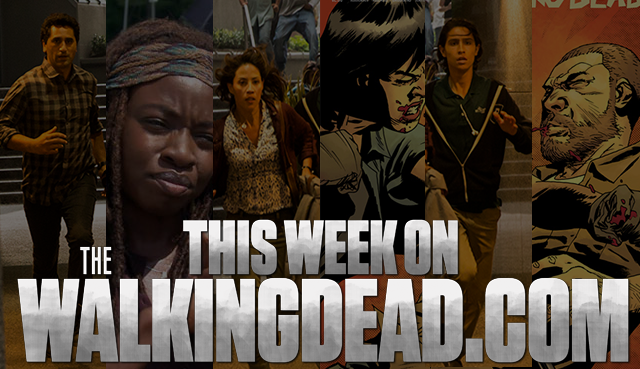 Kanye’s running for president, the NFL lost a lawsuit to a quarterback, and based on that Dodgers National Anthem performance it appears T-Pain can sing without auto-tune. Despite all of that, you have NOT seen it all. Thankfully, we have crazy great Walking Dead news all in one place!

EARLY in the week We got to watch a brand spanking new episode of Fear the Walking Dead (titled “So Close, Yet So Far”)! This episode focused on Los Angeles beginning to sense something wrong going on around the city. Riots break out and separate our characters.

The official Walking Dead beer from Terrapin is finally coming out soon. WHEN you ask? Find out in the article here!

Speaking of The Walking Dead, we’ve got your Issue 146 preview. Looks like Maggie and Rick aren’t…hitting it off.

Speaking of Maggie! Actress Lauren Cohan told Entertainment Weekly that Season 6 is “suffocating.” Speaking of suffocating, you guys should really check out the AIR movie with Norman Reedus. Ok, done with the speaking of’s.

Teens reacted to our Telltale Walking Dead game in this awesome video from the Fine Brothers. The game allows the user to choose their own path, so each experience is different from another’s. This react video was great in showcasing the various paths each person could take and how it affects their story.

Fear the Walking Dead may be a week (ish) away, but we still have a SNEAK PEEK at Episode 3. See what Travis and his family are up to and why hospitals are ironically a terrible place to go during the apocalypse.

Ever wonder how your favorite Walking Dead actors got the roles they did? Wait, you do realize they’re actors and this isn’t a documentary, right? No? Well for the rest of you, find out how their auditions went in this great piece from The Hollywood Reporter!

Believe us, Season 6 of The Walking Dead will be completely unpredictable and crazy. Watch this interview with Danai Gurira (Michonne) to see just how out of left field this season will be.

Finally, it’s not easy being the (basically) step-father of a heroin-addicted teen at the onset of the zombie apocalypse. What IS easy is watching this interview with Cliff Curtis who plays Travis Manawa in Fear the Walking Dead. How would he survive the apocalypse? Watch this interview from AMC to find out!