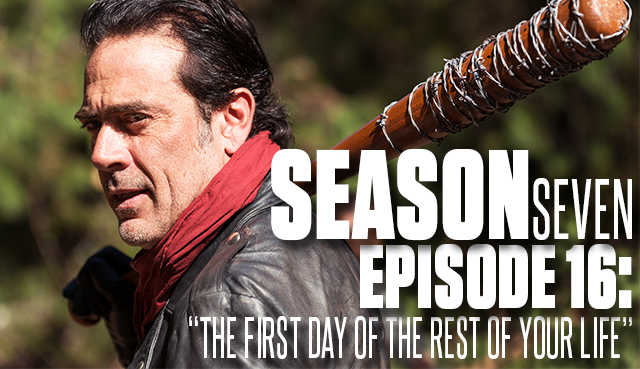 The First Day of The Rest of Your Life

Following her failed assassination attempt on Negan, we flash forward to Sasha listening to music in a claustrophobic space…she doesn’t look so good. She hallucinates an alternate reality where she’s back in Alexandria with Abraham. She snaps out of it as Negan visits to remind her of her mission to “solve some shit.” Back at Alexandria Rick interrogates Dwight on his intentions. It quickly goes south and Daryl holds a knife to his face. He explains he was just following orders and reasons that without Denise Daryl would be dead. Dwight warns them about Negan’s impending attack and promises to help slow them down.

At The Sanctuary Negan reveals to Sasha his plan to Lucille three of Rick’s people to establish a new(er) world order. “Punishment is how we built everything we have,” Negan explains. Sasha argues no one has to die and Negan agrees to kill fewer of them. Meanwhile, Maggie plots to bring The Hilltop into Rick’s fight against The Saviors. 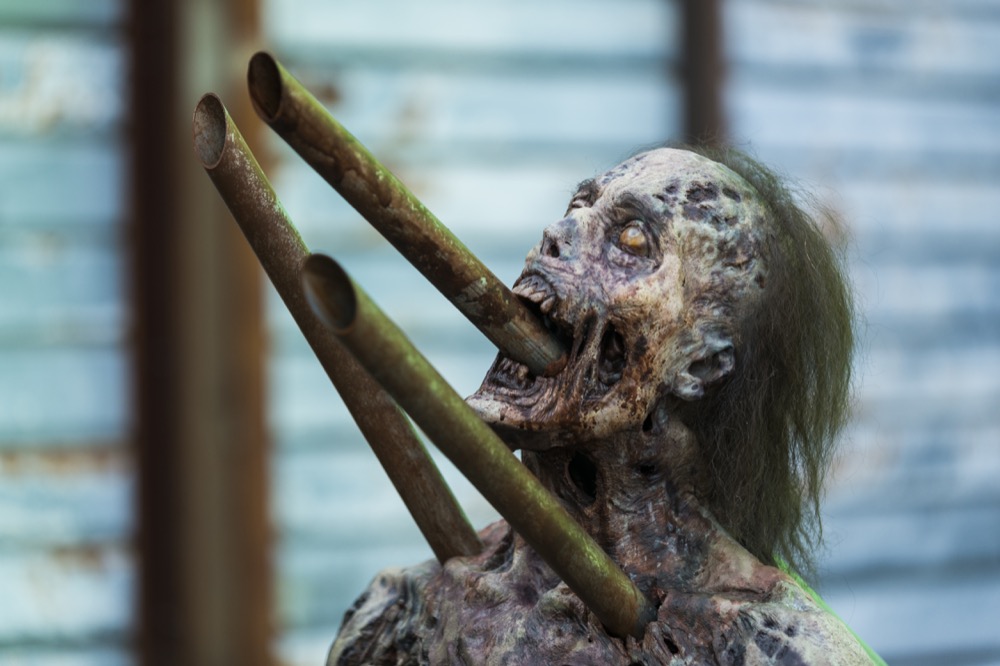 Carol prepares for battle as Ezekiel convinces Morgan to join the cause. He eventually concesed and they ride off as Jadis and her junkyard crew arrive at Alexandria to make good on their deal. Rosita helps plant explosives for the Saviors as Jadis positions her people around the town and offers to sleep with Rick after the battle is won. Rick and Michonne awkwardly decline as Negan and the Saviors run into Dwight’s road block. 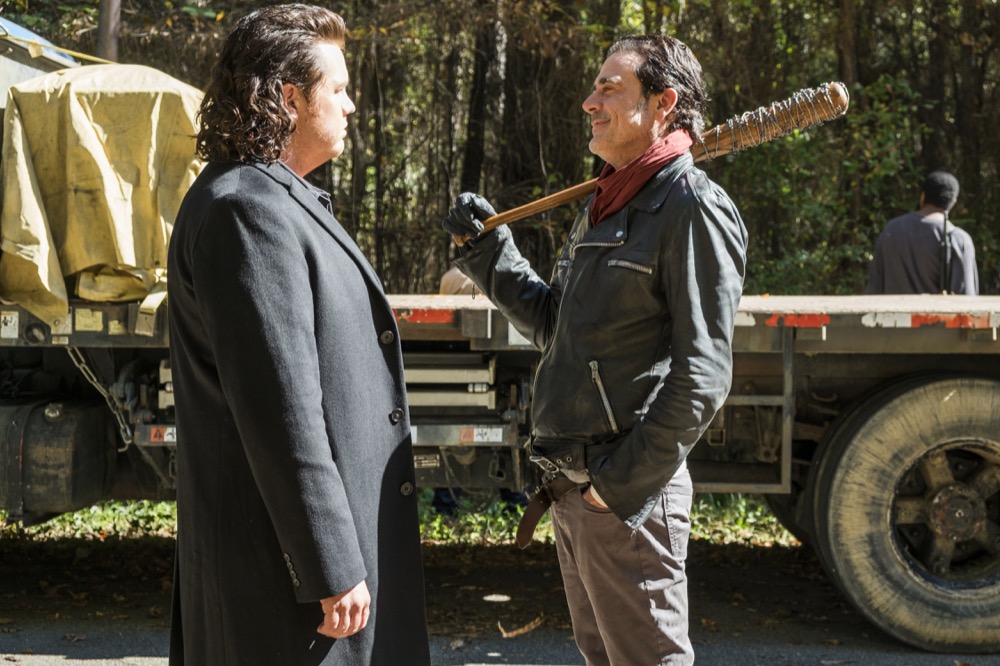 Eugene and The Saviors finally arrive at Alexandria to offer Rick an ultimatum, “Comply or die.” Rick, who’s clearly upset over Eugene’s about-face, asks where Negan is and Eugene asserts HE is Negan. Fed up, Rick signals Rosita to detonate the explosives, but it fails. Suddenly, Jadis’ people hold Rick’s group at gunpoint. They’ve been betrayed. Negan steps out behind Eugene and calls Rick out for trying to blow them up. Dwight and Simon wheel a casket out and tell Rick Sasha’s in there. Negan demands he turn over all the guns, surrender Daryl back, and decide who gets Lucilled next…or Sasha dies. Rick asks to see her and Negan complies, opening the coffin and…

FLASHBACK: ~Dream/Afterlife~ Abraham tells Sasha Maggie’s baby is the future and she must protect that at all costs. CUT BACK to The Sanctuary

The undead Sasha falls on Negan and Rick’s group turns on The Saviors and Junkyard people. (Like Andrea in the comics) Michonne fights with someone in the tower as the rest of the group handles the chaos. Negan’s rescued by one of his men, who gets his face eaten by Sasha. Rick pleads with Jadice, who shoots Rick in his side and kicks him off the tower. 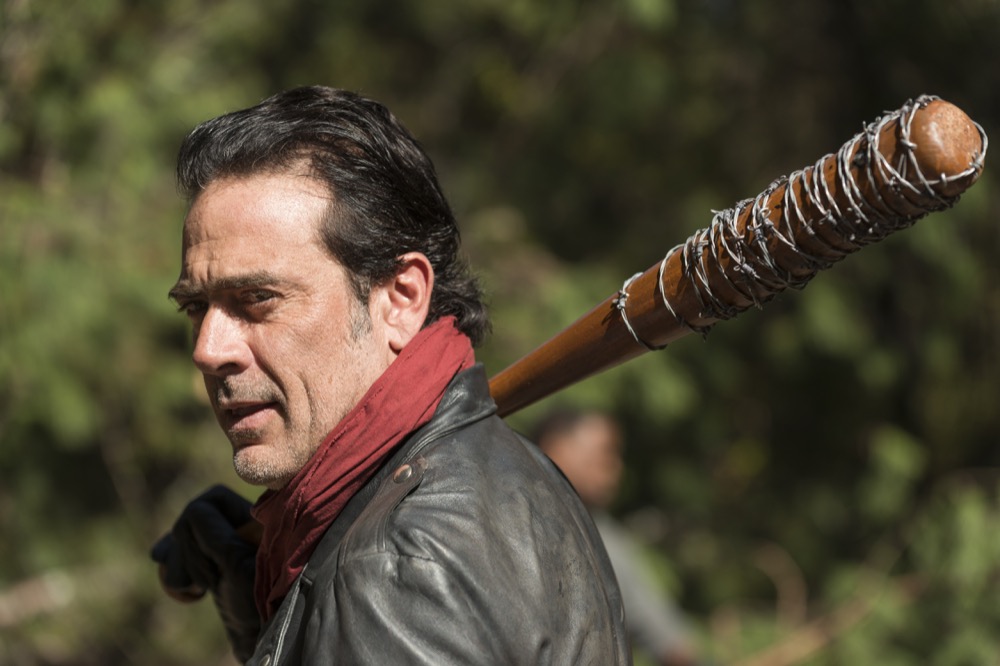 Jadice escorts Rick to The Saviors, who have now taken the advantage in Alexandria while Michonne continues her bloody battle with the woman. Rick and Carl are put on their knees as Jadice negotiates a deal with Negan. Carl tells Negan he’s not going to win as Rick sees a woman fall from the balcony Michonne was in. Negan tells Rick he’s going to kill Carl in one swing because he likes him. Rick promises to kill him. Negan prepares to kill Carl when Shiva jumps out of nowhere and mauls a Savior. Negan retreats as Ezekiel and The Kingdom soldiers arrive in full force with Maggie and The Hilltop by their side. Negan and The Saviors depart Alexandria in trucks as the rest breathe a sigh of relief. Rick finds Michonne beaten and bloodied, but not dead. 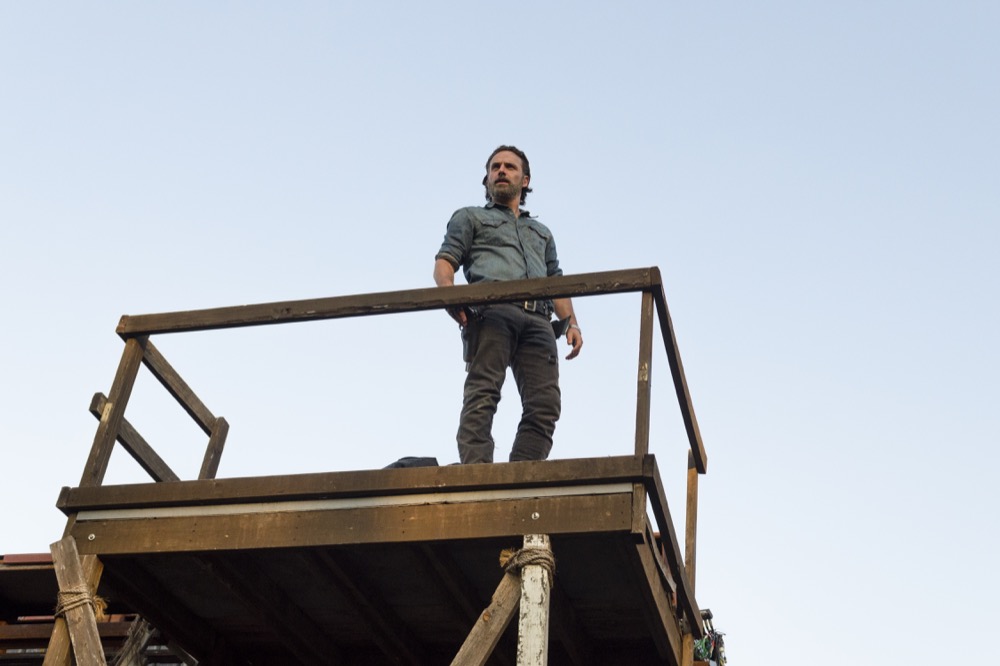 Back at The Sanctuary, Negan questions Eugene on Sasha’s death and he surmises she ran out of air in the coffin. He lets it go for now and then informs his people, “We are going to war!” Back at Alexandria, Rick and his allied groups lick their wounds and deal with the leftovers. Maggie finishes off Sasha, Daryl discovers one of Dwight’s figurines that says, “I didn’t know,” and Michonne and Rosita recover in the medical ward. We see Sasha and Abraham together again, staring off into a distant sunset. Maggie, Ezekiel, and Rick presumably give the same march to war orders to THEIR people. All Out War is coming.

What did YOU think of The Walking Dead Season 7 Finale? Did Sasha make the right decision? Will Eugene ever turn back? WILL JADIS EVER SLEEP WITH RICK?! Give us all your reactions and predictions in the comments below!

CHAMPIONSHIP: Who Would You Rather Survive A Zombie Apocalypse With?