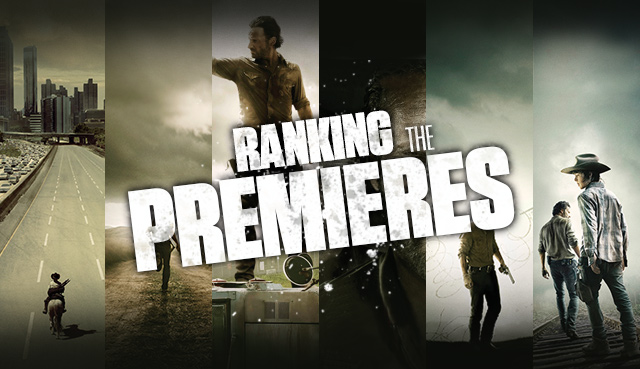 Just 3 days (give or take) between us and a new Walking Dead! Premieres generally take a back-seat to large, hyped-up finales, but premieres are where cliffhangers are resolved from previous seasons, tone is set for the upcoming season, and new ideas are put in place. In short, premieres have to do a lot of heavy lifting when it comes to plot.

To date, there have been six Walking Dead “premieres” due to how The Walking Dead is aired. Each season (with the exception of the first, which aired in one solid chunk) has had a season premiere in the fall and a mid-season premiere in February. Sunday is the premiere of the second half of season 4 and we thought it might be time to take a look back (get it?) at all the premieres and see how they stack up against one another.

Episode 208, “Nebraska”
Hershel demands that Rick and his group leave after they kill the walkers in the barn, Dale catches on to the fact that Shane might be dangerous and tries to warn Andrea and Lori, and Hershel takes off for the local bar. When Rick and Glenn track him down they also run into two strangers. When Rick refuses to take them back to the farm, he’s forced to kill them. Lori speeds into town and manages to flip her car after hitting a walker.
I LOVED the stuff in town, especially guest star Michael Raymond-James (from Terriers and True Blood). The other stuff was little more, ehhh. Lori is kind of unlikable and rash, and that car accident is questionable.

Episode 201, “What Lies Ahead”
After fleeing the CDC, the group comes across a complete gridlock of abandoned cars. During the delay Sophia is chased off by walkers, Shane and Andrea decide to leave the group when they can, and Carl is shot by a hunter.
201 has some great character moments and some really pivotal interactions, but it’s the ending that makes this episode. If you weren’t a reader of the comic, that’s a BIG “oh sh** moment.”

Episode 309, “The Suicide King”
This is a pretty big episode. Merle and Daryl attempt to escape Woodbury, and succeed when Rick shows up with Maggie. When Rick refuses to let Merle come back with them, Daryl leaves the group with his brother and the two head off into the woods. Rick, Maggie, Glenn, and Michonne head back to the prison to find Tyreese and his group there. Rick is about to allow them to stay when he again hallucinates (he sees Lori on a catwalk). His resulting freak out is enough to make Tyreese and his group bolt from the room.
This is the episode where the Governor really starts to crack and lose his cool. Andrea only kind of sees it though, which is frustrating. It sucks that Daryl leaves the group. Viewers were despondent over that. As not a huge fan of Crazy Rick, I was a little upset by the ending (“Damn it, Rick, Tyreese is awesome!”), but what made up for it was Glenn’s unhinged reaction when he stomps a walker’s head in. Not only is it super gory, which I love, but it’s also a big emotional moment for Glenn.

Episode 301, “Seed”
The Prison! One of the biggest set pieces in the comic and the setting for some of the biggest moments finally arrives after being teased at the end of Season 2. The group fights their way into the prison and clears a cell block for living. When Hershel is bitten by a walker, Rick is forced to amputate his leg. We also see how Michonne helped Andrea survive the winter.
There are 3 things that really make this episode: 1) After a Season 2 finale glimpse, we get to learn a bit more about Michonne, a favorite from the comics. 2) We finally are in the prison and I am giddy to see where things go. 3) Rick brutally amputating Hershel’s leg. Talk about gnarly, gritty moments.

Episode 401, “30 Days Without an Accident”
I’d say this is the episode when we start to see how dangerous this world really is. Rick has given up his gun and is trying out life as a farmer. He comes across a woman in the woods who has almost totally lost it. She lures Rick back to her camp to try and feed him to her walker husband and Rick is forced to kill her. Also, Daryl and a crew run into trouble on a supply run, as zombies literally rain down from the ceiling. And to top it off, a prison resident drops dead from a mysterious ailment and reanimates.
My favorite part of this episode (aside from the walker who’s scalp peels off when it sits up) is the ending. Here we have an entirely new threat and it has nothing to do with psychotic humans. But speaking of, there’s the super gentle crazy woman in the woods. Even the people that aren’t violent can still be so dangerous. Fear the unknown and remember that ANYTHING can be dangerous in the zombie apocalypse.

Episode 101, “Days Gone Bye”
Ah, the very beginning. Rick Grimes awakens from a coma to find the world around him completely fallen apart—the dead no longer stay dead and the living are scarce. Rick heads off in search of his wife, comes across Duane and his son Morgan, learns what there is to learn about what’s going on, and heads on to Atlanta, where he gets trapped in a tank by his first horde. Aaaaaa memories.
How excited was I about this episode? I wrote a recap of it and I didn’t even work for Skybound yet. I was a massive fan of the comic AND zombies, so the thought of a really high quality zombie show had me chomping at the bit, and Episode 101 did NOT disappoint. Because it is the beginning of such a great thing, “Days Gone Bye” is my pick for best premiere.

Where will Episode 409 (“After”) rank? We’ll be curious to hear what you guys think this Sunday!