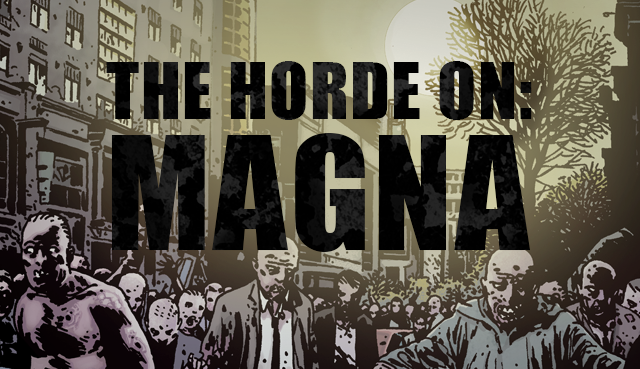 The Horde On: Magna

Hey all! We had The Intern gather up some of our favorite conspiracy theories and predictions from across the site in anticipating of The Walking Dead #128. Here are our ten favorite gems:

Cody – “Well I am thinking Magna and Co. are spies of another community. They send spies because they want to know whether Rick’s community is a good one, or if they will pose a threat on themselves. Since Magna may become another main protagonist, she might start to become affectionate with the rest of the community and forget to get back to her own and report to her own community. Her own community might think that Alexandria and Hilltop are a threat owing to the lack of information by Magna and starts to suspect Rick that he and the community might have kidnapped her. They may become the rivals of Alexandria and Hilltop and may become the next main antagonist (well, because of various misunderstandings).”

Ihatepeacocks.com – “I think Magna and her group are a Norwegian Black Metal Band and that they’ve rolled into Georgia hoping to play a few gigs while they secretly search for The Devil because everybody knows: The Devil Went Down to Georgia. But Bernie was their drummer. Now that he’s dead thanks to Jesus, Magna’s pissed. They need someone to fill in on drums fast…….Enter Negan. They’ve got to bust him out. But he won’t leave without his Emo Roadie, Carl.”

Jordan M. Billings – “Magna somehow gets into the prison in Alexandria. Sees Negan, Negan tricks her into thinking Rick and Alexandria are bad people and locked him up, killed his group and stole the supplies or something like that. She lets him out, and Negan kills either Rick or Andrea before escaping Alexandria.”

Jason Thomas – “Oh hecky nah you can’t trust her she is too beautiful.”

JW Coombs – “One the one hand; Magna and her people seemed humble and honest. For example; when she had her first meeting with Rick she was visibly and vocally intimidated by Rick and the safe zone. She was also very modest and humble when asked if she was her groups leader; stating that they’re a “team, and have no leader”–while the other members of her group outwardly proclaim her their leader. But on the other hand, the thing that makes me feel uneasy is the things that were said in the beginning of 127 while Magna and her crew were still on the road. Luke tells Magna that they could make it a few more miles today to which Magna responds “We’re not even sure where we’re going; so there’s no hurry to get there”; seemed sort of fishy to me. Maybe they were banished from their last settlement?”

Seanem44 – “I think they can trust her. She seems like a logical choice for a heroine, especially if Michonne is taking a backseat and no longer fighting.”

Raymond Eddie – “In the end itl be either Negan to kill rick or save him from this new group. Hell what if Magna is secretly on of Negans wives.”

Hobbs – “they coulda been hidin out in one of those underground bunkers that was stocked up with like 3 years worth of food.”

Thanks everyone for your comments! We’re thinking of making this a regular piece where we highlight what people are discussing. Let us know below if you like the idea, and maybe even comment on what your favorite comment was. Very meta.

Home | The Walking Dead | The Horde On: Magna

Registration for The Escape at SDCC Now Open!