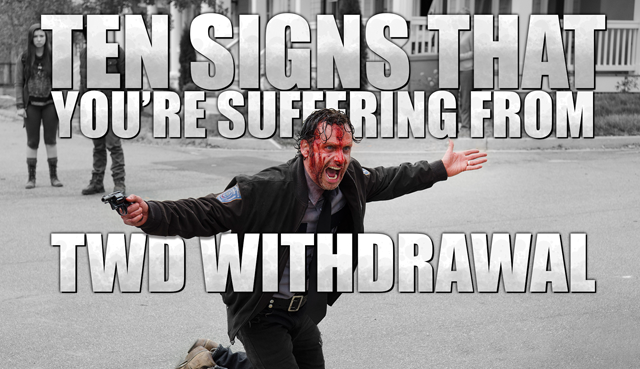 The Walking Dead is off the air until the FEAR THE WALKING DEAD premieres late this summer. Hopefully you’re all reading the comic books to tide you over but even so, you might be suffering from TWD Withdrawal! It’s a real thing! We did a list last year but we’ve come up with an entirely new list of symptoms!

Can’t Decide Which Wall Your Katana Looks Best On

Well, next to the front door makes the most sense, but it would look pretty cool over the fireplace, but then it’s kind of hard to get to, and maybe in the bedroom would be a good idea, certainly you want it somewhere it can remind you of the pressing need for security in an insecure world, so maybe in the bathroom, or in the—you know what? F it, I’m gonna wear that motherf*^%er.

When People Ask You What You’re Doing You Say, “Stuff… Things…”

You Carry a Dead Opossum Around

Why are they screaming? You brought dinner…

Your Local Library Has Reported You to the Police

“Roadkill: Meal or Menace?,” “The Big Book of Inescapable Knots,” and “Welcome to Death House: The Legal Argument for Booby Traps” are just a few of your recent check-outs.

If the hungry gaze in your eyes isn’t enough to keep people away, certainly the twigs and leaves trapped in the tangled brambles of your ridiculously unkempt facial hair is.

You’ve Seriously Considered Constructing a Steel Wall Around Your Home

Remember, supports on the INSIDE. Don’t build your wall like a damn rookie.

Also curious about why you constantly feel the need to remind them that they don’t know shit about shit and why you’re so intent on going to Washington, DC.

You Bring a Hammer to Your Karate Class

“Sensei, please teach me the lost art of hammer fighting,” you say as you kneel.

“Take off that ridiculous beanie,” replies the cashier at 7/11, wondering why you’re kneeling in the middle of his store and wanting the $1.39 you owe for the Big Gulp.

You shout, “You still don’t get it. None of you do! We know what needs to be done and we do it. We’re the ones who live. You! You just… sit… and plan and hesitate. You pretend like you know when you don’t! You wish things weren’t what they are. Well, you wanna live? You want this place to stay standing? Your way of doing things is gone! Things don’t get better because you… you want them to. Starting right now, we have to live in the real… world. We have to control who lives here.”

“Uh huh. Take out the trash after you’ve ripped those stupid band-aids off your face,” Bill says.

Your hours are spent wandering around empty Walking Dead sets crying and wondering when the TWD cast will return (very, very soon is the answer).