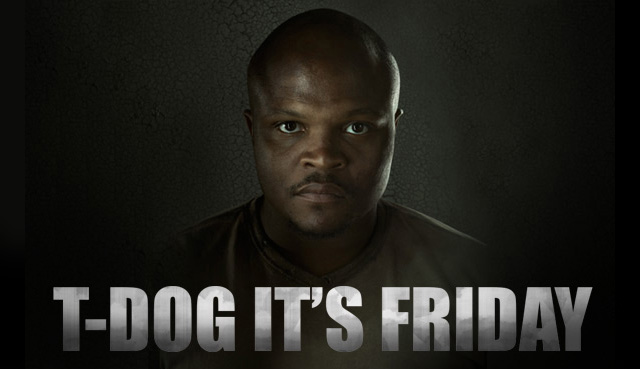 Another Friday, another day to be thankful! T-Dog It’s Friday! This week I decided to ask our man IronE some questions about life on The Walking Dead. Enjoy!

Everything I’ve heard makes me think that it’s a pretty tight set, like a big family. Can you talk a bit about life on set?
I think all the love and positive energy on the set contributed greatly to the success of the show. I went into 3 seasons and never had one bad day on the set. They became my second family.

It’s been really cool seeing Greg Nicotero grow into a larger presence creatively over his career. The FX on this show are, I think, easily the best on TV and better than most movies. How was it working with his FX team?
I’m so happy for Greg and his EMMY award winning fx team. The success they’re enjoying now has been long overdue because they have been incredible for a long time. It took a smash hit like The Walking Dead to allow the world to see it.

T-Dog’s last stand resulted in an IronE half-torso mold that could have it’s throat ripped out. Is that as awesome to see as I imagine?
Greg had T-Dog’s half-torso mold at the Walker Stalker convention a couple of weeks ago and people were thoroughly amused by it. It serves as a tremendous conversation piece when I whip it out for guests at my home. They are blown away by the stunning attention to detail.

Speaking of poor T-Dog, how did you learn about his demise and what was that like? Were you happy with his last stand?
I received a phone call from Glen Mazzara a month in advance of T-Dog’s death. It seems the fashion in which T-Dog died has made him a legend and will allow him to live into posterity. I couldn’t be more pleased. I’m so grateful to Robert Kirkman and the entire TWD team for allowing T-Dog to go out heroically.

Post-TWD, you’ve got a book out (Blindsided by The Walking Dead) which evolved into your one-man show. What can people expect from the show and are you going to be bringing that to more cities?
TWD has presented me opportunities I wouldn’t have, otherwise. I have both a book which has become a one man stage show both entitled, “Blindsided by the Walking Dead.” They’re guaranteed to make you laugh, cry, smile, angry, sad, motivated and inspired beyond belief. I’ve been able to create a work(s) early on that could serve as the crowning achievement of my career. All thanks to The Walking Dead for making it possible.

What does the next year hold for IronE Singleton?
The plan next year is to take the show to more cities and anywhere else in the world that understands English and possibly beyond with a translator. My book and show deserve to be experienced because they offer a heavy dose of truth and love that the world needs to help advance humanity beyond our present state of passion and greed and achieve the pinnacle of our experience on earth. If not through my book and show, I plan to turn it into a movie.