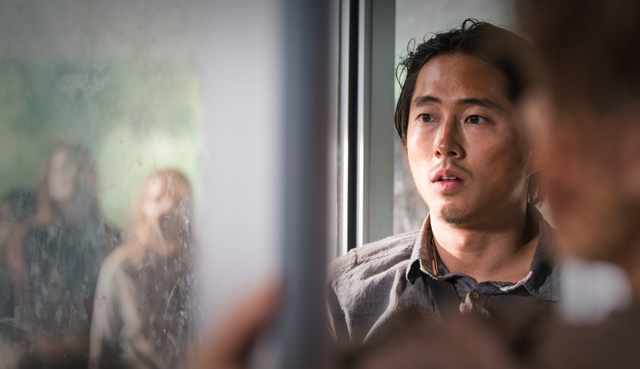 Episode 514 was a big episode for Glenn! Steven Yeun talked to EW about the shocking scene (SPOILERS from hereon out, you’ve been warned!), Glenn’s tension with Aiden, and what it was like filming in a glass revolving door! Read on:

EW: I’m curious how this episode was presented to you. Did you just read the script like normal, or did you get a warning from your showrunner Scott Gimple about some heavy stuff coming up?

STEVEN YEUN: I don’t know if it was necessarily just for the heavy stuff, I think it was also he called us all to tell us about Tyler’s departure from the show. That’s obviously a lot to take in—he’s so great and to know that he was going was kind of a bummer. As are all. But he called and said, “Hey, these are the things that are happening, but it’s going to affect everybody”. It’s pretty interesting when something happens on the show means something and elicits some response. So I was excited.

When we first pick thing up, what’s happened between Glenn and Aiden’s relationship since the episode two weeks ago, because they’re fighting then, but when the episode begins they seem to have found a little common ground?

I think at that point they’re heading towards amends. They’re heading towards a mutual respect, in a way. With Glenn, how he always saw Aiden and Nicholas and kind of Alexandrians in general was that he sees a bit of himself—he sees an early version of what Glenn was like when he was in the apocalypse. To see the change that has happened in Glenn from the beginning up until now—even before you catch him saving Rick in the tank—you think about what he probably went through. He sees these people and he’s like, yeah this is what I used to be like. And he looks at Aiden and Nicholas specifically and says, “These are the people that I could have been if I went the other way. If I had been sheltered like them I could have been someone ill prepared, someone that’s just scared.” And I think he realizes that with Aiden. So after the punch, it was kind of Glenn coming to an understanding that they need help, and then Aiden also coming to an understanding that they need help. So for them to come together on this mission was not even like a good graces thing, but more like, let’s actively work together to pursue what we all want, which is a life and safety within that life.

You guys get to the warehouse. It’s dark, lots of zombies, an explosion—just gnarly all around. What was filming that scene like?

It was a lot of fun, it was really dark. A lot of smoke machines going on in there. [Laughs] It’s just so gnarly, some of the things we do. I remember laying on the ground, doing the post-explosion scene of getting up. One of our focus pullers would keep throwing styrofoam peanuts at me just to cover me in peanuts before the take, and people would hack cough and just kind of prepare themselves on the ground, groaning and moaning until we called action. It’s so fun to have a space that’s realistic to work in and also have people that are so committed. It just feels like everything that you’re doing is real, so it’s a lot of fun.

You’ve got this scene with Daniel Bonjour who plays Aiden, and it’s his death scene as you’re trying to save him, but the zombies are closing in and Nicholas is taking off. Is filming a death scene like this—even for a guy who has only been on the show for two episodes—different, and if so how?

I wouldn’t say it’s necessarily different. You have someone that’s been there a long time, and I guess the impact is just greater to the audience. But for us, it’s not that there’s no weight to it, it’s more that you’re appreciating the good work that that actor did up to that point in such a short amount of time. And I thought Daniel did a pretty great job selling himself as a douchebag. I felt like he helped make that punch the other week so satisfying, and he built that to that place. So when you see his death, it is nice to see and get a moment of confession, a moment of redemption to tell his story.

Tell me about the staging for the revolving door scene. What a cool concept for Glenn, Noah and Nicholas to get stuck in opposite sides of that door—just a really neat new way to show being trapped in a confined, transparent space.

They actually built a revolving door, so you can’t really put anything past them to not be able to do. They physically built one and then they installed it into the side of an actual building. Our set guys are incredible. We set that up and we were practicing in it a couple of days before—just running through rehearsal and seeing the logistics by which this could actually happen and what we would actually do to get out of it. It worked out to be a really great set piece to obviously show what’s happening, but also to show the differences in two people. It speaks on multiple platforms and levels.

And make sure you watch the Sneak Peek of Episode 515: Try