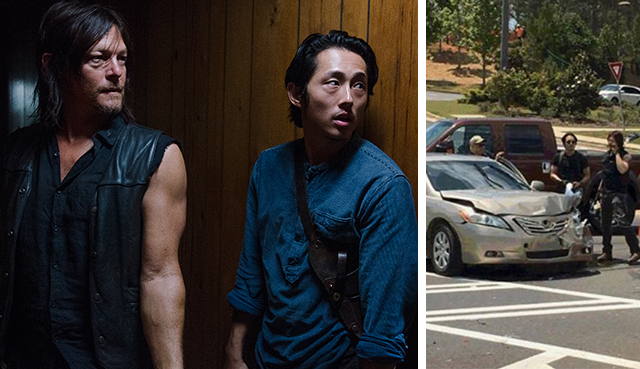 Add this to the list of reasons to love Steven Yeun and Norman Reedus. This week the pair of Walking Dead actors apparently helped out the victims of a car crash in Peachtree City, Georgia (close to where they’re filming Season 7). Here’s a pedestrian’s picture from the scene:

Local CBS news station WTOC interviewed the photographer, Mikail Turan. “It looked like he was trying to help everybody, kind of calm everybody,” Turan said of Reedus. “It took me about 5-10 seconds to take these pictures and then the cops came and I’m sure after that, probably, they took off.”

Another witness, Ben Wilkie, described how he came on the scene. “I looked out, (saw) a bad accident and (saw) two motorcycles stop. I said that (kind of) looks like Norman Reedus. Someone else came out and said, ‘Yeah that’s him!'”

That’s right, two of the biggest Walking Dead fan favorites rode in on MOTORCYCLES to help people who were in a car accident. Can it get any better? Here’s the full WTOC news report on it:

Tell us what you think about this story in the comments!