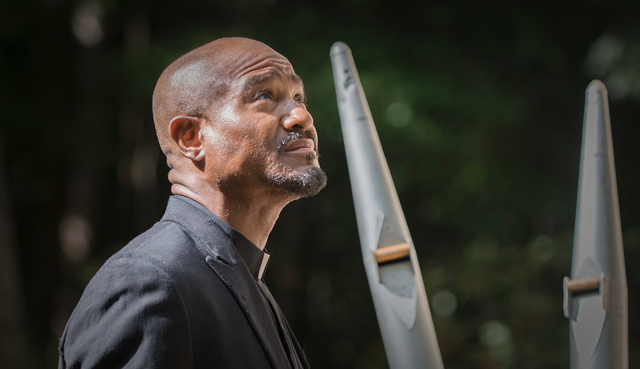 Seth Gilliam (Father Gabriel) chatted with EW post-Episode 507 to discuss Crossed and where he thinks his character is going in the upcoming arc! Read on!

ENTERTAINMENT WEEKLY: We open with Sasha taking an axe to the pew and Daryl taking out the church organ pipes to use as defenses and Gabriel asks, “Are you going to take the cross too?” How’s he feeling watching his sanctuary just be decimated and turned into a fortress?
SETH GILLIAM: I think it’s very difficult for him. After the horror of what went down with his churchgoing flock, that church has become a special haven and safety for him. Seeing it being torn apart is very difficult for him. It’s a sign that you can’t stay where you are.

It launches Gabriel into that whole scrubbing scene were we see you trying to scratch the blood off with your nails and rub it off with your hand. You’re looking a little crazy there, my man.
Yeah, it was a little bit of my Lady Macbeth moment.

And then later there’s the scene where Carl is telling Gabriel to pick a weapon so he can learn how to fight, and he can’t even handle that. Why can’t Gabriel fight back to protect himself?
He’s extremely conflicted by what he’s done, and he’s still a man of God, so foremost that means doing no harm to people. So you pick up a weapon and eventually you’re going to be using it. You can say it’s for self-defense, but eventually at some point weapons get used. They’re not just there for show. There is more telling than showing, and I think for Father Gabriel, the moment that he takes up a weapon is a very difficult one for him because it is kind of admitting that perhaps the ways that he has living his life and going on and believing in the world has really come to an end.

And that comes into play at the end as we see Gabriel being attacked by a walker. He throws it down, sees the cross around her neck as he has the rock raised above his head, but he cannot finish the job. Is this because he’s a man of God, because this person used to maybe be one of his parishoners and it reminds him of what he’s done in locking them out, or a little bit of both?
I think it’s a reminder that he is a man of God, and more so than that, that this was a person. That this was a God-believing — and, presumably, God-loving person — and I think that’s the thing that jars him more than anything. It’s like, yeah, okay, this dangerous creature is here and trying to destroy me, but my God, this is a person! This is a person like me, and this is a person who believed in God like me, and this is a person who believes in the after-life and everything else, and here they are.

How does Father Gabriel view this whole zombie apocalypse — or, to put it in more biblical terms, plague? What’s his viewpoint on why this has happened to humanity?
I’m not sure at this point his viewpoint on why this happened, and why God would have chosen to do this kind of thing. And not knowing is part of his dilemma as well. You would assume that you would have the answers, and all the answers can be found in the Bible and in the scriptures about why things are happening and how they are going to turn out for either the better or worse or what have you. But there’s nothing in it to comfort him with that, and I think it’s very conflicting for him.

And make sure you check out Norman Reedus’s mid-season finale thoughts!