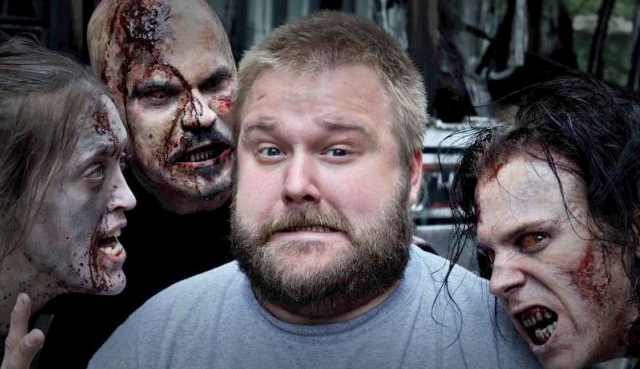 AMCTV’s blog sat down with Robert Kirkman and talked to him about Season 5, including Michonne’s backstory and which characters from the comic he’d love to see on the show.

Q: Tell us about the first few weeks on set. What’s excited you the most?

A: Well, the things that excited me the most I cannot talk about! There are a couple of big set pieces that were built from scratch and it’s amazing to see Grace Walker work his magic. I will say that the worst thing about going back to set is that our prison has been dismantled. I kind of wish I had spent a little more time in it. It sucks to see that gone, but moving on, we’ve got cool stuff going on in this season. The secrecy has been fun. There are some really great things coming.

Q: You wrote Season 4, Episode 9, “After” where we get a peek at Michonne’s past life and her family. Can you tell us more about what went into writing those scenes?

A: That had always been a story that was present in the comic book series, but had never really been established in the show — this idea that those pets she was walking around with were actually people she knew. One of the cool things about the show is how we adapt things and improve on them. I think coming up with this emotional story about her lover and her lover’s best friend who had actually caused, in a roundabout way, the death of her child was a pretty big add-on that has enriched Michonne’s character immensely. It’s really cool to be able to play with these characters in two different worlds. That was a big episode for Michonne and it was a lot of fun to write.

Q: Episode 9 was probably the single most faithful adaptation of one issue of your comic than any other episode so far. Will we see anything like that level of faithfulness in Season 5?

A: Scott Gimple, more than any other showrunner, is more familiar with the comic than I am. So, there’s often times when he’ll say, “Hey, I want to adapt that one scene,” and I’m just like, “Where is that again?” That happens quite a bit. There will always be these very closely-adapted moments that will always have tweaks. The beauty of The Walking Dead is that anyone who is 100% familiar with the comic can watch the show without spoilers and vice-versa. There will always be something new for both audiences. There are a couple of characters in particular coming up in Season 5 that will get very big chunks of their backstory revealed in a very cool way. Some of that is from the comic and, like always, some of it is not.