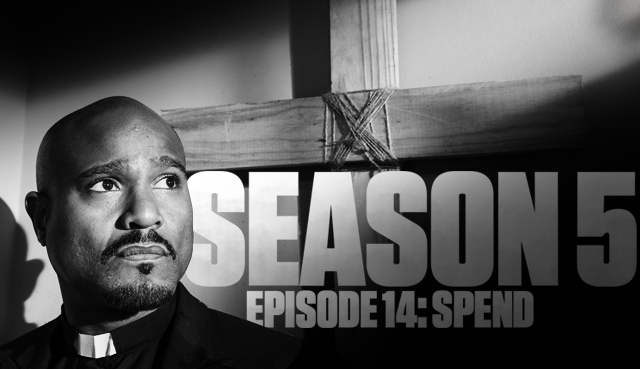 Last week we had a little bit of a strange episode. An odd musical choice at the end (the always-awesome Bee Gees), Rick ambiguously pawing his hidden gun as he looked at Pete and Jessie, and then Rick kind of zoning out with his hand on the wall. WHAT DOES IT ALL MEAN?! Personally, I like the kind of off-kilter tone of the show right now. Don’t you think it mirrors what Rick and Co. are going through? Living in this very civilized community in the middle of the insanity they’ve been through? Let’s see what happens tonight!

If you look up “tortured” in the dictionary you’d get a picture of Father Gabriel. The guy starts off the episode chewing the scenery around his makeshift church and then proceeds to rip all of the pages out of his bible. So, still not coping well, I guess.

After the credits we see Daryl on his new motorcycle, heading out of town with Aaron trailing in a car. While he does that, Noah meets with Reg Monroe about the future. His future, specifically. He thinks it might be good if Alexandria had a second engineer/architect. That’s awesome. I like the idea of apprentice Noah. Reg hands him his notebook and tells him to start writing everything down.

Aiden, Noah, Eugene, Tara, Glenn, and Nicholas (the other d-bag scout) are heading out to get parts for the power grid. Eugene is reticent to go but they aren’t about to chance getting the wrong part. Tara tries to get info from Noah about Holly. Oooooooo! For the record, Deanna seems really appreciative that Glenn’s around to help. They put on some bad dubstep and hit the road.

The scouting crew gets to the warehouse and Glenn wants to play it safe and scout the building, checking for emergency exits and all that good stuff, but Nicholas is the usual idiot (“we’ll just go out the front”). Luckily, Aiden agrees with Glenn and they scout the perimeter. Tara and Eugene are paired up (is that the best idea?) and Eugene argues that A) he shouldn’t be there and B) he’s already done his part by getting them all to Alexandria. They both agree that he’s a huge coward.

Glenn and Noah get a look at the front of the warehouse and it’s swarmed by walkers. “I guess we’re not getting out the front,” Glenn says. The group heads inside. A bunch of walkers are caged in a locked-off inventory area. Tara and Eugene head off to look for the parts they need while the others keep watch.

Aiden is unfortunate enough to come across a walker clad in body armor. Glenn tells him to let it come in close but of course he doesn’t listen. He shoots its knee out and then takes pot shots at it until he manages to hit a grenade. The cage has been blown open and Aiden’s body is skewered on some rods sticking out the wall. Tara is also down, bleeding from her head.

Glenn scoops up Tara and they regroup in an office. They hear Aiden calling for help—turns out he’s alive. Eugene offers to stay with Tara while they go for Aiden. Eugene scoops up Tara and carries her out, finally shooting some walkers. He’s not great at it but he gets the job done. Nicholas and Glenn try to pull Aiden off of the metal spikes he’s stuck on. Nicholas bails, though. He can’t do it. Aiden admits that they panicked on their scouting mission and that’s why some of his crew died. They run out of time and Glenn and Noah have to run while Aiden is eaten alive.

Glenn and Noah run after Nicholas, who’s heading for the rotating doors at the front of the building (where all the walkers are). He gets out front but has to retreat back into the building when he gets swarmed. Thus it happens that Nicholas, Glenn, and Noah are all trapped in the rotating door, Nicholas on one side, Glenn and Noah opposite him, with walkers both outside and inside the building, trying to get at them. Pushing on either side of the door will expose the person(s) on the other side. Glenna and Noah have the guns, but Nicholas has the ammo. They’re pretty much screwed…

Until Eugene shows up blasting that awful dubstep! The zombies at the front of the building head after the van, so now the guys stuck in the door just have to break out the front. As Glenn hits the glass, Nicholas’ side is starting to open up to a bunch of hungry walkers. He flips out. When Glenn tries to hit the glass, he tries to bolt. This opens up Glenn and Noah’s side to the walkers. As Nicholas squeezes out, the walkers get Noah. They rip into him, literally tearing his face apart as Glenn watches.

Nicholas gets to the van but Eugene refuses to leave Glenn and Noah behind. Glenn catches up and rips Nicholas out of the van and knocks his ass out. “Where’s Noah?” Eugene asks. Glenn can’t answer.

As they drive back to town, Eugene sees Noah’s notebook (that Reg gave him) open to the first page. It reads, “This is the beginning.”

While Glenn and crew are dealing with all of that, Abraham is on wall-building duty. In a scene straight from the comics, they end up in trouble. When one of the work detail (Francine) gets separated and hurt, the wall crew (led by Tobin) wants to abandon her but Abraham goes to the rescue. Abe uses a tractor to his advantage and manages to bottleneck and kill a ton of walkers and make it out alive. Francine decks Tobin when he says he was just sticking to protocol by closing ranks and leaving her to die. Abraham basically takes over at this point, orders look outs and organizes the wall crew. Looks like Abe’s back in charge.

Following this incident, Tobin meets with Deanna, Reg, and Maggie. He tells them what Abraham did and how he’s leading the wall crew and thinks that Abraham should be in charge. Deanna consents. Reg walks Tobin out and Deanna looks a little concerned. She’s worried that everyone from Rick’s group is ending up in positions of power. Maggie goes downstairs to work on their (field?) plans.

While Maggie is downstairs, Gabriel shows up. He tells Deanna that Satan disguises himself as false light, and that Rick and his group are not good people, that they’ve done unspeakable things. Deanna says that they had to to survive. Gabriel insists that they can’t be trusted and they’re dangerous and they don’t deserve paradise. Deanna looks… worried. Maggie hears this all from the stairs.

Earlier that day, Rick stops by Jessie’s garage. Someone has busted up one of Jessie’s sculptures and Rick takes the case. A little bit later, Pete makes a stop off at Rick’s house. He offers him a beer and is clearly a little drunk. He’s kind of defensive about how lucky they’ve been in Alexandria. He tells Rick to bring the kids in and says that they should be friends. “We kind of have to be.” Hearty slap on the back and he’s gone. Rick looks down at his wedding ring.

While Rick is getting less friendly with Pete, Carol is at home and hears something in her pantry. It ends up being Sam, looking for cookies. Carol’s pretty short with him but she does agree to make him cookies if he’ll steal chocolate for her. Then she shoves him out the front door.

He makes it back with the chocolate and Carol is still salty. She tells him that they’re not talking and tries to get him to stop any time he makes conversation. Sam is a Chatty Cathy though and asks Carol for a gun. When pressed, he won’t say why he wants it, only that it’s not for him. Then he bolts.

Carol follows suit to Jessie and Pete’s house. A drunk Pete opens the front door and is real defensive when Carol asks where Sam is. He refuses to let Carol talk to Jessie and then shuts the door in her face. Carol knows the signs of an abusive relationship all too well. She goes to Rick to tell him that Pete is beating Jessie and maybe Sam too. There’s only one thing Rick can do: kill Pete.

WOOOW! So, first, let me say that the revolving door scene is one of my favorites in the series so far. VERY very smart. Also, some ish is going down! Gabriel turning on the group! Carol telling Rick to kill Pete! Noah is dead, and so is Aiden, Deanna’s SON! After what Deanna heard from Gabriel, what the hell is she going to do after this? Also, how badass is Abe? There are some tough times ahead with just two episodes left this season. What’s going to happen next?!

Give us your thoughts and predictions down below! How do you guys feel about Gabriel now?