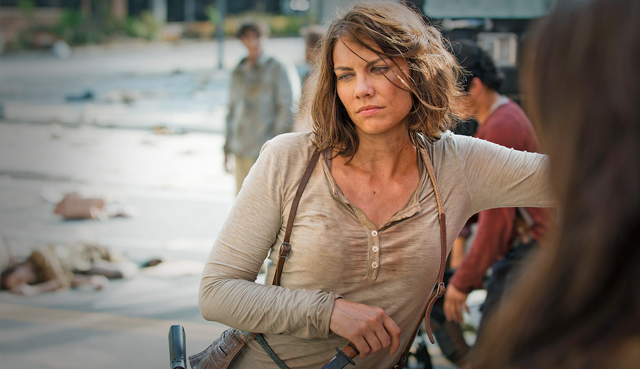 Entertainment Weekly recently chatted with The Walking Dead creator Robert Kirkman about the aftershocks of the Season 5 midseason premiere. Kirkman talks about Maggie and Daryl, Eugene’s new place in the group, and what’s up with Morgan… read on:

EW: Let’s talk about the death of Beth—what that’s going to do to the group as a whole, and to Maggie specifically now that she has really lost the last link to her family.

ROBERT KIRKMAN: Maggie to a certain extent is adrift. I mean, she’s got Glenn—that’s somebody who’s certainly a big part of what provides stability to her life. But one by one she has slowly lost her family, the Greene family—the family that the writers of The Walking Dead hate because we systematically kill everyone in that family. So look out!

But anyway, she’s definitely got a lot to deal with when we come back, and for her it’s kind of a two step grieving process because she thought that she had lost Beth when she lost her father. And it was kind of like a one-two punch of, “Oh my gosh, I’ve lost this person.” And it was an uplifting moment and a moment of hope when she was told that Beth was out there and Beth was actually alive, but then she immediately found out the opposite. And so it was really kind of a gut wrenching series of events that she’s had to experience, and that’ll weigh on her tremendously.

But for the characters as a whole, Beth is going to serve to remind these characters that no matter how good you get at living in this world—and over the course of these five seasons because they’ve clearly gotten extremely good at living in this world—danger still lurks around every corner and no amount of preparedness can prepare you for everything. There are random acts, there are things that are out of your control that will happen. This brings fear back into their lives because I feel like coming out of the hunters and Terminus—even though they lost Bob, you know—they’ve kind of gotten to a point where when the zombies roll up, or when they encounter people they feel like they are manageable threats they’re like, “We’ve managed zombies, we’ve managed people, we know what we’re doing.” We’ve kind of brought them more fear at this point because we’ve reminded them that anything can happen at any time.

What can you say about Daryl moving forward in terms of his reaction to the Beth thing, because obviously he got close with her at the end of last season?

To a certain extent this might send Daryl on a spiral that leads him back into his old behavior. We’ve seen Daryl integrate into the group in ways that he hasn’t done in the past and grow much closer to Rick and much closer to Carol than he ever was. And seeing him interact with these characters and be included in ways that he’s never really been in his entire life has been something that we’ve been exploring. But coming out of Beth’s death and how he opened up to that character and really cared for her and then ended up losing her—that might lead to him being a little bit more distant, which is going to lead to some other things that I can’t talk about. So I think we’ll definitely see a big shift in the way he interacts with everybody moving forward.

We saw Abraham’s reaction to Eugene’s revelation that he was not really a scientist, but we really haven’t seen Eugene yet react to that. So what does this mean for that group with Abraham, Eugene, Rosita, and Eugene’s place now that his lie has been exposed?

I would say that this has been a very tight knit group, the three of them, that they’ve been traveling together way before we even met them. And this situation with Abraham and Eugene where Abraham found out that Eugene had been lying this whole time obviously put a tremendous amount of distance between them and shook up that dynamic in a big way. I would just say that there’s some external influences that will probably arise that will either bring them closer together or push them apart forever.

Read the rest of the article on Entertainment Weekly!

And if you haven’t already, watch the Sneak Peek of Episode 510: Them