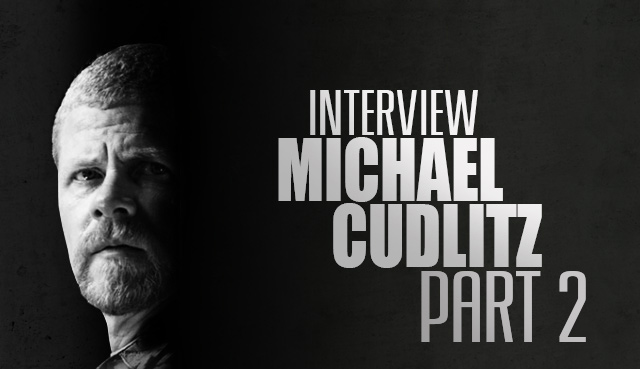 Now that we’ve all seen Episode 411, we thought we’d check in with Michael Cudlitz for more about Abraham! If you missed part one, check it out HERE.

The Walking Dead: You mentioned before [see previous interview] that Abraham has this troubled past in the comic book, and this is not the first time you’ve played a soldier, in Band of Brothers for instance. And in Dark Tourist, you play a deeply troubled man with secrets. Do you feel like this role kind of marries a lot of what you’ve done in the past?

Michael Cudlitz: Everything takes a little bit of you, a little bit of what you’ve done. You get a second chance at certain things, ones you might hope you get to do a little bit differently. But with Abraham, I hadn’t thought of it that way, but it is sort of a marriage between Jim Tahana and Denver Randleman. There’s a lot of that rage that’s underneath that will be tapped, I can guarantee that, and I love that. I want the way he handled the people who handled his family… I want to see that. But I want to see it when it’s earned. With Episode 411, I’m not in a rage, I mean, I love this guy [Glenn]! I’m not gonna kill him because he doesn’t wanna join our group. But in a life or death situation, when someone pisses him off… too f**king bad, dude, you’re done. There’s no in-between with him. And if it’s dead, you just f**king kill it. It’s never been clearer.

I do love that he’s mission-oriented, it is all about the NCOs [non-comissioned officers]. They don’t come up with the plan, they execute an element of the plan, and that’s what he’s doing. He’s got his mission. He doesn’t know how to fix the whole thing, but he knows how to get this element from point A to point B and that’s what he’s gonna do. And that is really a wonderful sort of way to operate as far as what’s your goal and as an actor to perform with having that one end-game in sight. It’s awesome, and everything that pulls you away from it just f**ks you up more. We have to stick to the mission, and what happens when you can’t stick to the mission? That’s what we’re gonna explore. It’s exciting.

TWD: You mentioned the fight with Glenn. How was it fighting with Steven Yuen? Did you land any real punches?

Cudlitz: No, not at all, but he was fantastic. They were actually keeping it a little too precious, and we kinda wanted to go for it knowing the rough blocking and the grappling on the floor, and we said let’s just roll and let’s just do it. We know what we’re doing, no one is really landing any punches. But you know, like he says later, he loves to fight. When [CENSORED FOR YOUR SPOILER SAFETY]. When there’s this opportunity, Abraham’s like alright motherf**ker, let’s go.

TWD: Your fight is broken up when you get attacked by a nice little herd. How is it hanging out with zombies on the set?

Cudlitz: That was awesome. That was the first kill, felt good about it. I know I’m gonna get a bunch of shit from people who are firearms guys because I shoot that one walker in the head with a Dessert Eagle with one hand—too f**king bad because I just envisioned how you guys would do it in the comics and if it were the comics he would definitely be holding it with one hand.

TWD: In these first episodes you hung out a lot with Stephen and Alanna. Was it a while before you hung out with other cast members?

Cudlitz: The cast is really close as you guys know. Everybody reached out to me when I first got hired. Emails, phone calls, just to say hi and welcome, and then they all popped up on set to say hello early on when we were working. Days sometimes overlap too, where the first half of the day is the A story and the second half is the B story, so everyone’s coming in for makeup or haircuts or coloring so everyone’s around for quite a bit so I had a lot of interaction with quite a bit of the cast on set. I didn’t really interact with anyone off set, though, because I was kind of laying low because we didn’t announce until New York Comic Con. So the idea was to keep myself laying low. I mean, you’re walking around with bright red hair and a handlebar mustache in Atlanta, someone’s gonna figure it out. [Laughs]

Again, a huge thanks to Michael for taking time out of his busy schedule to talk with us. Such a cool guy, I can’t wait to see what he brings to the character of Abraham and what the writers have in store for us.