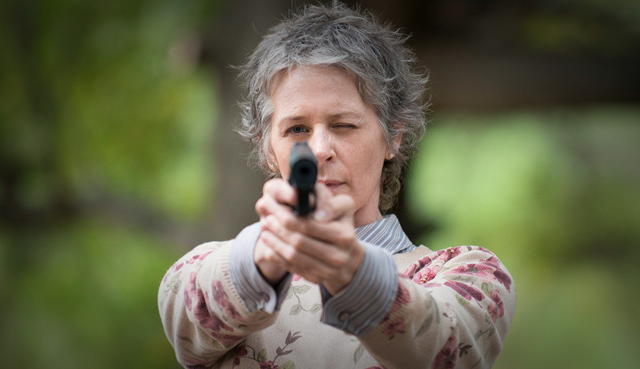 In a recent interview with EW, Melissa McBride talks the mindset behind infiltrating Alexandria, who Carol feels she can trust, and what it was like filming the cookie scene with Major (!!!) Dodson, who plays Sam. Also, OBVIOUS SPOILERS if you aren’t up to date with Episode 513. Oh wait, you watched it? Sweet. Read on:

EW: First off, I love undercover Carol. And it started right with that first taped interview with Deanna where she’s lying about her past and talking about how she’d like to join the Junior League. Talk about why she formulates that plan, seemingly on the fly without telling anyone.

MELISSA McBRIDE: I think when she feels uncertain with a threat, she’s going to throw that out there just to be safe. And also, is she really lying? [Laughs] Let’s go waaaaay back. Maybe she was a people person. Hey, she’s a people person. She loves people!

Depends on the people.

Yeah, who knows? There was all that potential with Ed in the beginning, the one she married! [Laughs] But yeah, she’s just being very careful and strategizing again. To go into this unknown situation like that, this is a tactic that she is used to, having to put on this face.

Is Carol even capable of trusting any more?

She is totally capable of trusting, but she’s gonna be safe. She’s aware of the threats. She and her group have been out there long enough. And they’re also very different people and this episode now is where all of this meets in the middle with this place. And bringing up who you even were before all of this even started and who you’ve become now that they’ve been in it for so long—their world and the world of our group and trying to create this new world mingling them together—it’s just bizarre watching that episode and thinking how utterly bizarre it is for our group to walk into this town and then after all that they’ve been through suddenly we’re at a welcome party? The idea is just absurd. It’s got to be surreal. So yeah, that feeling is too good to be true for someone like Carol. Who knows what she went through and how she caught that in her mind—like was Ed like this before all along and he just put up this front? And then he became abusive? Or was he an asshole this whole time? And that’s back then. And pulling us up now to where we are in this world, they all have a lot from their past that they’re pulling forward. And for Carol it’s also a very tactical move and something she’s not used to.

It’s interesting the way the audience has reacted similarly to Carol and how if you read the comments online, people were not trusting this community at all when you guys walked in.

Well, they’ve taken this journey with us and understand where their minds are. Then again, in the center of this place, all of these things are starting to collide—the desire for normalcy, remembering those parts of ourselves and how life was before all of this, wanting that so badly, but then truly knowing because we’ve experienced it, how the world really is. What’s the reality here? And it’s just behind these walls. And these walls are not safe. Like Rick said, we can just climb up the supports.

Okay, let’s talk about that big scene where this kid Sam catches you stealing the guns and you basically get all up in his face and threaten him that he will be eaten alive by zombies if he tells on you. Pretty intense stuff. What were your thoughts when you first read that scene?

I loved the scene. I was like, this is going to be such a fun scene to do. And Major Dodson [who plays Sam] is such an awesome kid. I feel like we hit it off right away. We share a similar humor and he’s curious and precocious and funny. I was really looking forward to doing that scene. I thought, she’s telling us a story. Story time! [Laughs] In a way. But also, wow! What an interesting way for her to again protect the group at all costs because she’s trying very hard to keep her place so that she can go undercover and watch to see what’s going on and know who these people are. And that’s so important—the survival of her group, and also the people within the walls. And the children—him, too. She’s got work to do, and if you tell anyone what’s going on, this is what could happen. And, really, that’s what could happen, you know? This is not unlike her teaching the children how to protect themselves. This child is unaware of this threat that is out there. They’re sheltered. They don’t know what’s going on. But if my cover is blown, some bad things could happen.

But the implication to him is that you’re the one who is going to do these bad things to him if he tells on you.

And that’s okay with her. That’s okay. She’s cornering him and really driving that threat home.

And don’t forget to Bake a Batch of Carol’s Cookies!

Poll: What Does The Carved “W” Stand For?