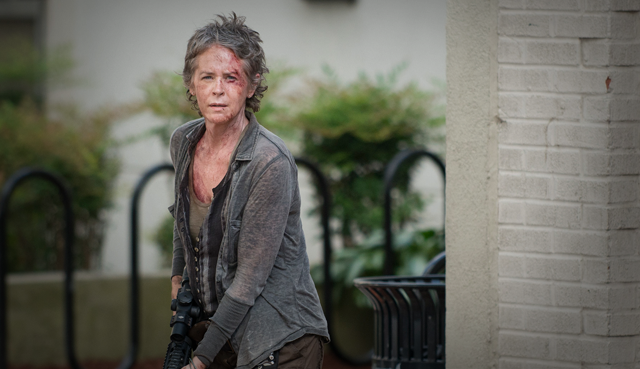 Entertainment Weekly chatted with actress Melissa McBride about Carol’s flashbacks, her surprising change of heart in the episode, and more!

ENTERTAINMENT WEEKLY: So let’s start with the most pressing question: What do you think of that piece of art on the wall?

MELISSA McBRIDE: [Laughs] It looked like a dog took a crap and wiped its ass! I concur! Nothing wrong with that though — the dog expressing himself.

Yes, the dog was the artist, I guess. Okay, we see all these flashback bits and pieces of what happened to Carol in this episode after she was kicked out of the prison by Rick. Was it nice to fill in the blanks on some of what happened there?

Yeah, it was nice to go back to illustrate what is going on in her mind with her memory of all that she has had to do, and how that has affected her and who she is now and the way she is looking at herself in the world. It was wonderful to see how she had struggled with what she has had to do.

My favorite flashback, and I was lucky enough to be there on set that day when you filmed it, was the scene right after you’ve left Rick. You’re just sitting there in the car and a zombie starts banging his arm on the window and you yell “GO AWAY!” just like you can’t be bothered with this nuisance right now. What’s Carol feeling there?

I think that’s symbolic of this overall nuisance of the world as it is, and everything she’s trying to do is coming up against her in a way. This episode explores so much of that and what are these fine lines? And what can I do in the strength that I have and the weaknesses that still exist? And what am I able to do to help? She has very significant points of view from where’s she’s been to where she’s ended up. She’s trying all that she can and is still kind of being shot down. So there’s this conflict of knowing and feeling what she needs to do, but with the fear of being shot down. And it is to help the people that she’s with, and there is so much in her mind as far as I’m concerned — so much.

We get to see that when she’s at the window talking about how she was very passive in her former life and was just kind of waiting for something to happen. And then she learned to be more proactive. This world forced her to be more proactive. So you can take a passive role or you can take a proactive role, but damned if you do, damned if you don’t. What are you waiting for and what are you fighting for? These real world challenges and mental challenges still exist. They always will in that world. I especially like the teetering of the van. I took that as very symbolic of the teetering of the mental states of these characters sort of teetering.

So much of this episode was what you’re talking about and Carol coming to terms with how she’s evolved and what she’s become. And we see her changing a lot even in the current events in this one episode. At one point she wants to shoot Noah for stealing their weapons, but then later she insists on saving him. Why the change of heart?

There is this undercurrent of a theme of judgment with what I said about taking a passive or very proactive stance. Either way, you’re gonna judge yourself or someone’s going to judge you for it. But what are the consequences? Does that matter at this point? And this is what she is struggling with. And she says at one point, “I don’t know if I’m going to hell, but I’m going to put it off for as long as I can.” And I am putting it off for as long as I can. She wants to help these people survive and she has ideas of how this is done. She can’t stand around. And if she’s projecting judgment on herself, she can struggle with that personally, but how am I going to fit in this group? I can’t just stand around. I know what I’ve done. I know what I’m capable of. I know that I would do anything to save these people. But Daryl’s looking at her sideways kind of, or she thinks he is. Tyreese doesn’t want some of the things that happened mentioned. So she’s feeling kind of like there’s a straphold…is that a word?

So she’s exploring all of this, and I love that this episode allows her to explore it with Daryl, who has his own points of view. When we see the book that was taken from the shelter — I love that because we’re still who we are, but these things in this world and what we’ve had to do just illustrates once again who we were before, and we still maintain these elements no matter how much of us is consumed by what we had to do. We’re still at our core who we were, and are, and always will be. I love the theme of the show and the title of the episode — “Consumed.” I love what it symbolizes, and even the dreamy music of Bear McCreary was just beautiful. And I don’t think I’ve seen an episode where so much of it is underscored.

I noticed that as well.

And also things like the heat coming up off the flames and warping our perspective, and those sort of things. It’s like the confinement of the people on the bridge when we walk in and we see them confined in their sleeping bags and their tents — in a narrow space. And these were people that were just trying to survive. Whatever happened, I don’t know. And there was so much restriction, and I think that’s another element of what’s going on — we’re restricted and confined to our own selves in a way, just trying to figure this out. It’s a theme that will run probably until the day this series is over. You have to hold onto that one piece of you that’s surviving being consumed and yet out of the ashes of that comes something different.

I’ve definitely felt that this season. Obviously, it’s always been there, but previously so much of it was about pure physical survival, but now it is survival of the soul and how am I going to survive who I used to be in this new world? I’ve definitely noticed that ramped up across the board this season. 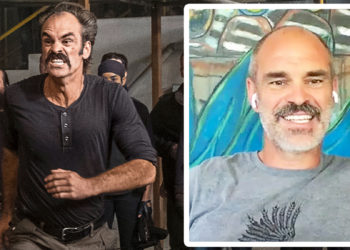 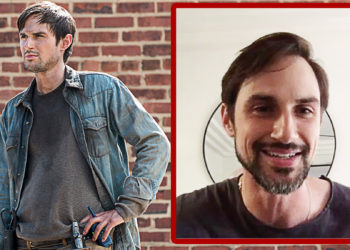 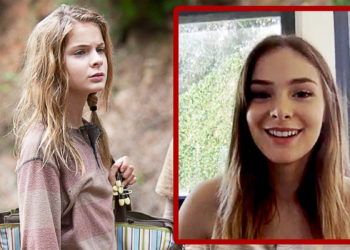 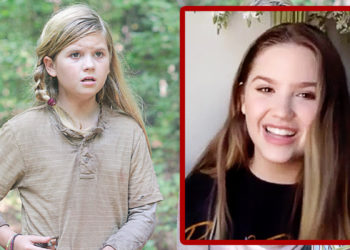