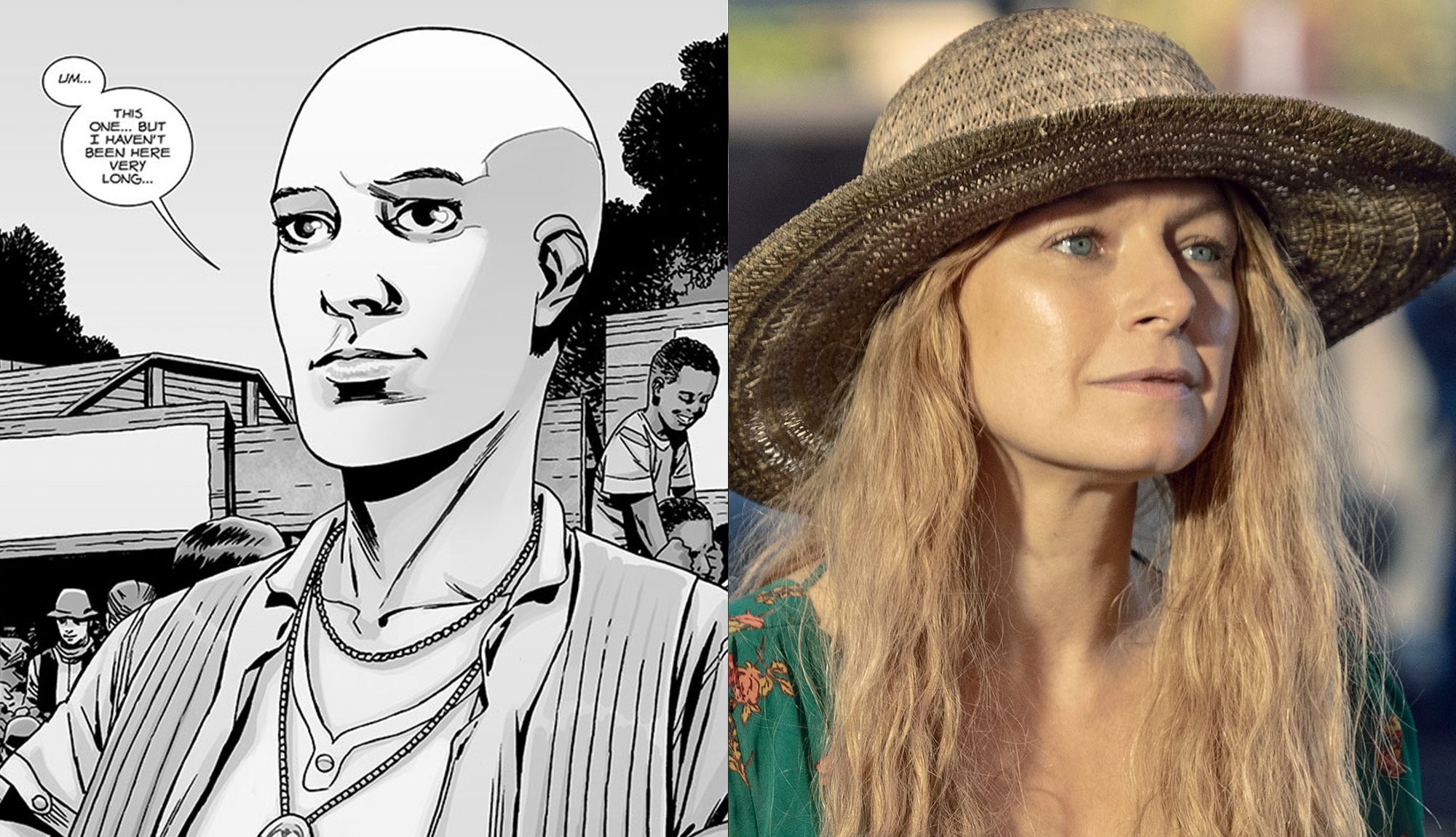 “The Calm Before” contained more comic comparisons than almost any other episode this season. Whether you’re an avid comic reader or purely a show stan we’re here to bring you the best comic comparisons from Season 9 Episode 15.

The crux of this week’s episode centered around The Fair. We’ll discuss in detail some of the differences below, but it was mostly the same as Issue 144 of the comics. Some quick differences: in the comics, the Fair is held in Alexandria, not the Kingdom. Also, the communities hadn’t been feuding like they were in the show, so the charter was unique to the episode. 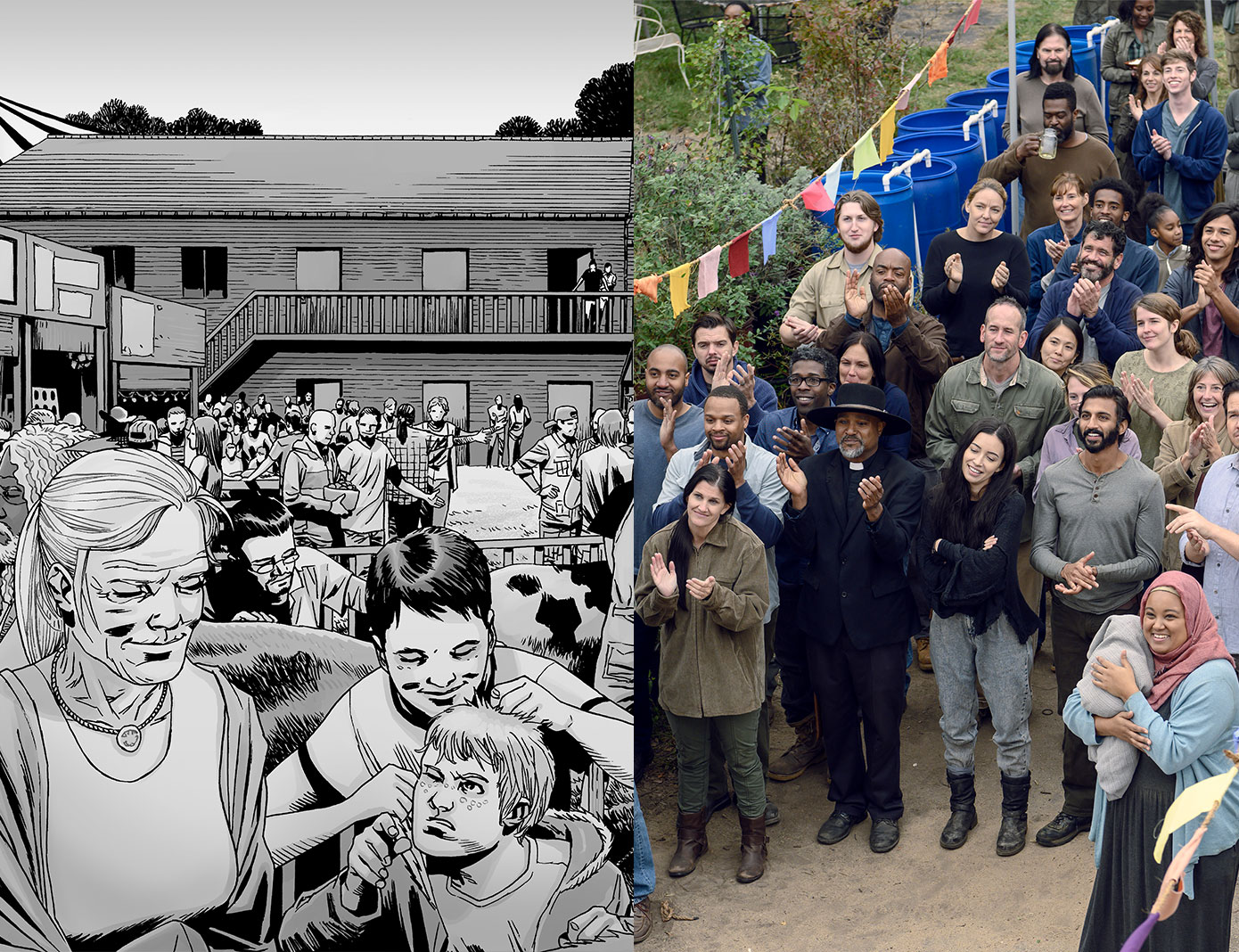 In the show, Alpha murders a cute Hilltop couple so she can scalp the woman and cosplay as her at the Fair. Once she makes it to Kingdom, Alpha checks out the booths, chats up Ezekiel, and eventually finds Lydia at the movie. She tries convincing her to come back with her but Lydia refuses. Feeling betrayed, Alpha disowns her and leaves.

In Issue 143 of the comics, Alpha also plays dress-up at the fair, but she goes straight bald because most people hadn’t seen her yet. She doesn’t talk to Ezekiel, but people were acting suspicious of this seemingly new person. 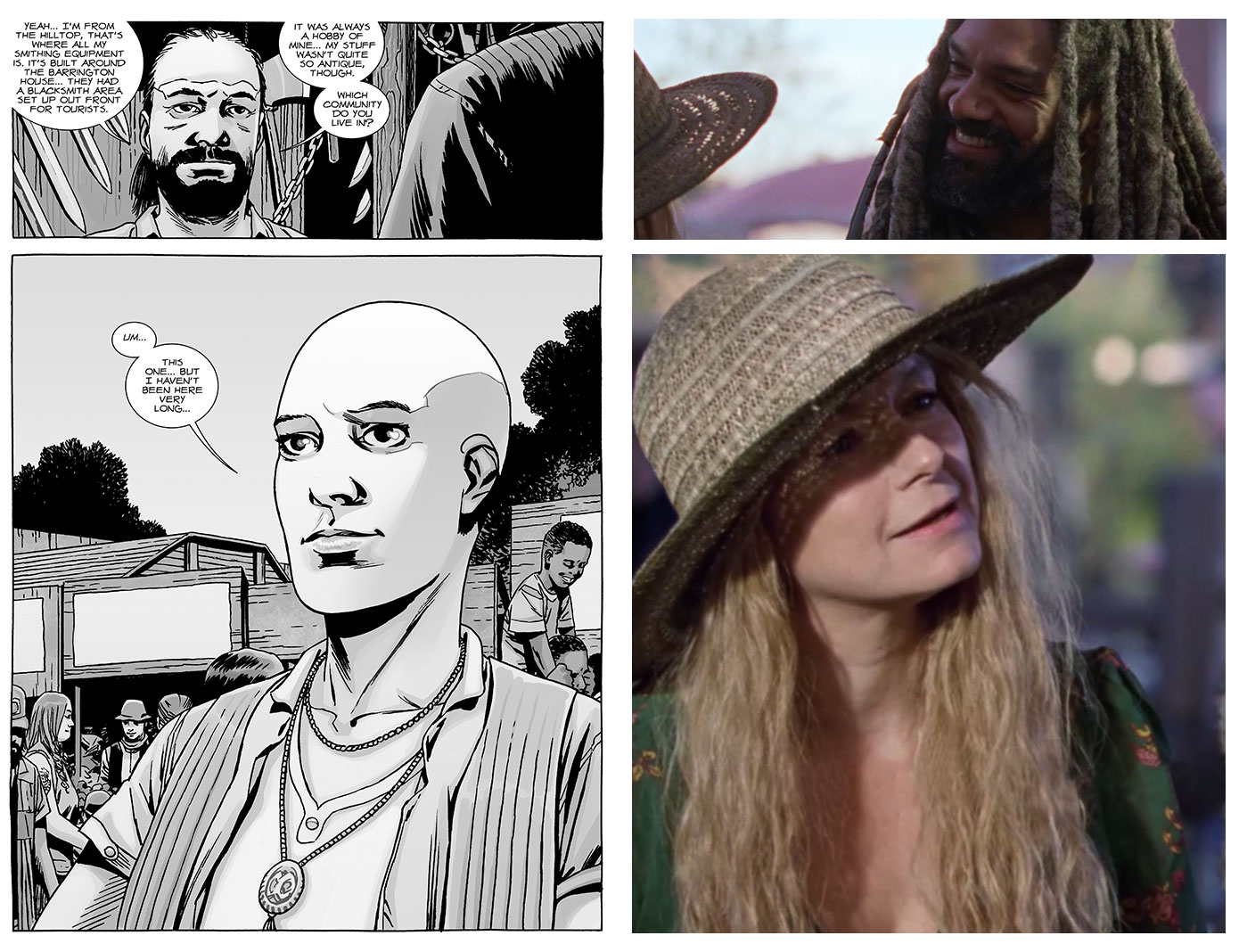 Alpha and her people ambush Daryl, Michonne, and Carol and warn them not to threaten her. As Alpha speaks she wipes blood off her knife, saying she ran into trouble on the road. She then points her shotgun at Daryl and escorts him to a cliff overlooking tens of thousands of walkers and Whisperers. She mocks his community for being a shrine to an old world and proclaims her group is right because they returned to nature.

This scene is almost identical to went down in Issues 143 and 144 of the comics. Alpha approaches our heroes with a bloody knife and says she ran into trouble. But since Daryl’s exclusive to the show, Alpha points a shotgun at Rick and takes him to see her horde of walkers and Whisperers at the top of a building, not a cliff. Weird flex, but ok. But other than the character and location swap, that whole my community is better than yours and don’t cross into our land stuff was spot on. 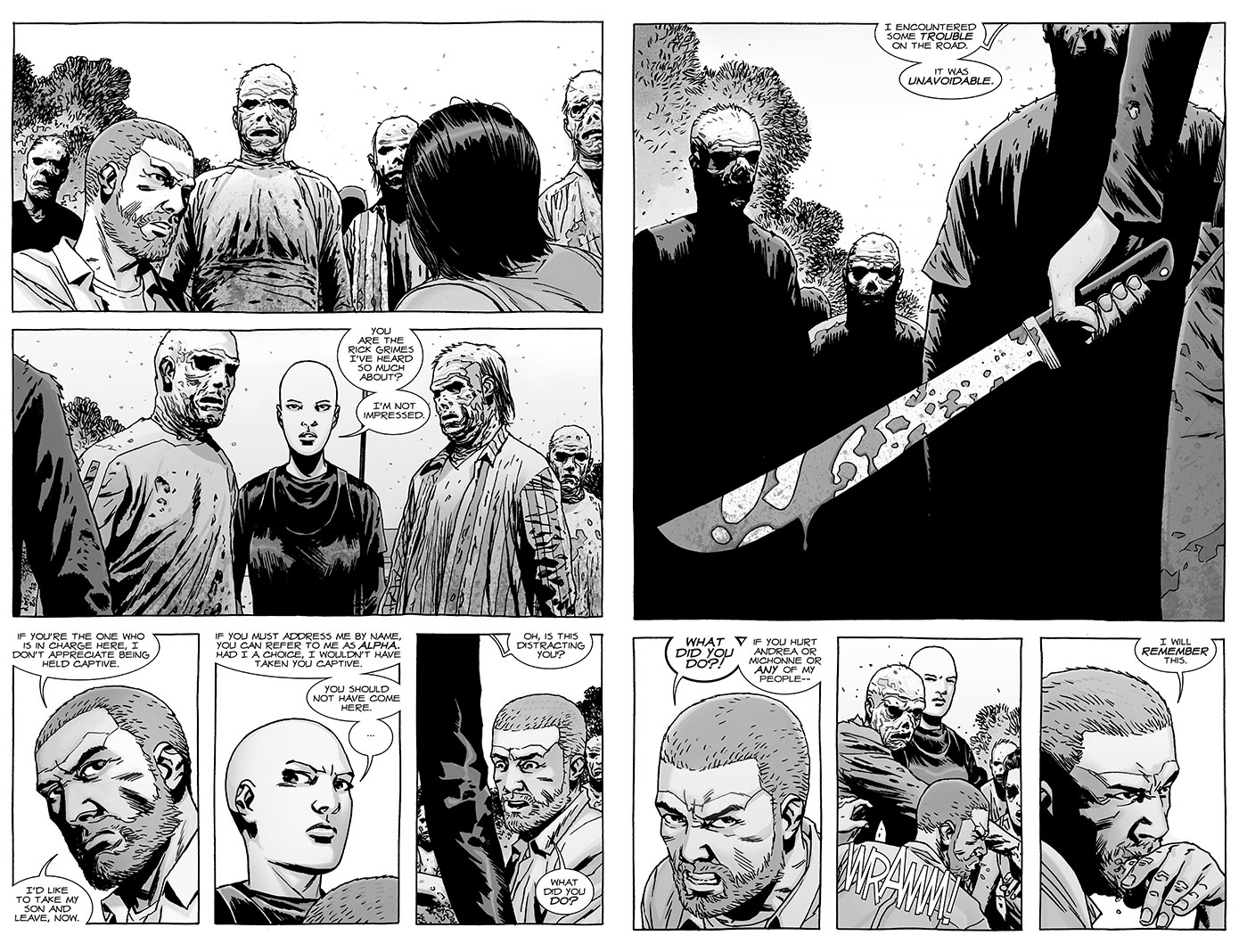 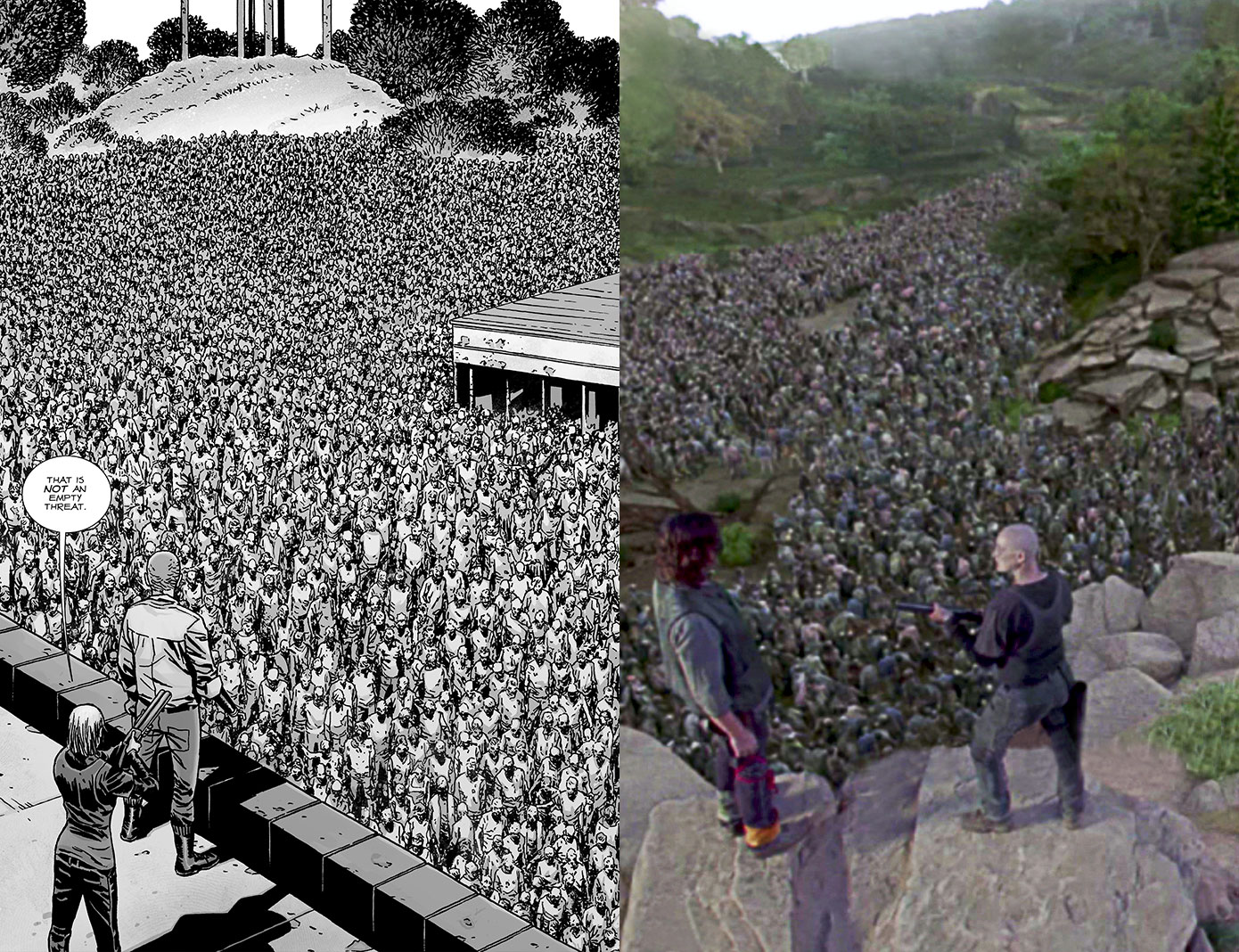 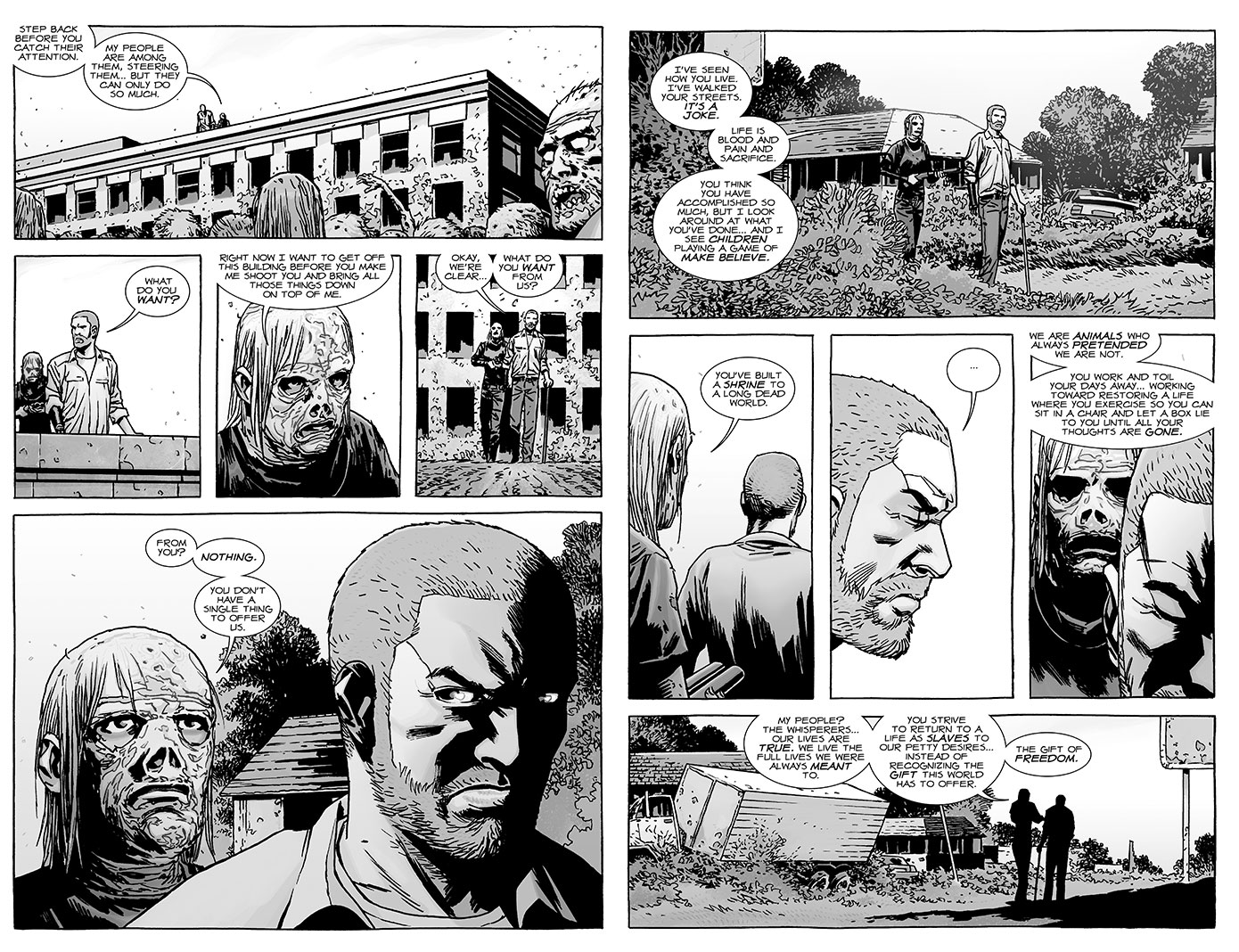 Since the movie is exclusive to the show, Alpha’s confrontation with Lydia happens in the woods. At this time in the story, Carl (not Henry) was still living with Lydia and the Whisperers in the woods. Rick comes to save him like Daryl did in the show and they decide to take Lydia along for the ride. Alpha isn’t happy but Lydia has made her choice. She gone. 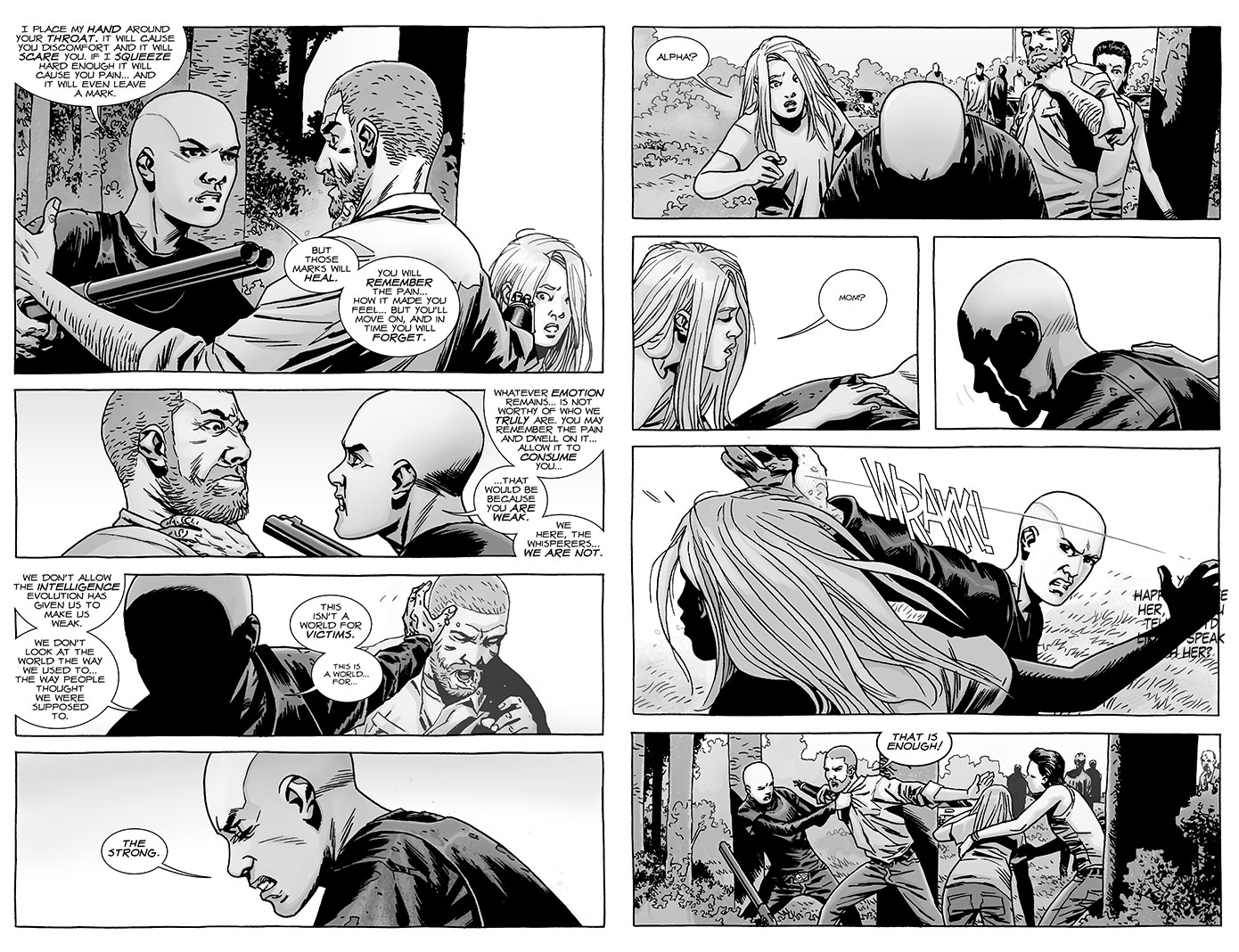 Next up is Alpha’s spontaneous murder of one of her own. In the show, Alpha breaks down in tears after disowning Lydia. When this poor Whisperer accidentally finds her showing emotion, Alpha has no choice but to stab him in the neck. In Issue 148 of the comics, a Whisperer also finds Alpha crying about Lydia, so she kills him. She then tells one of her own that she did it because they challenged her. 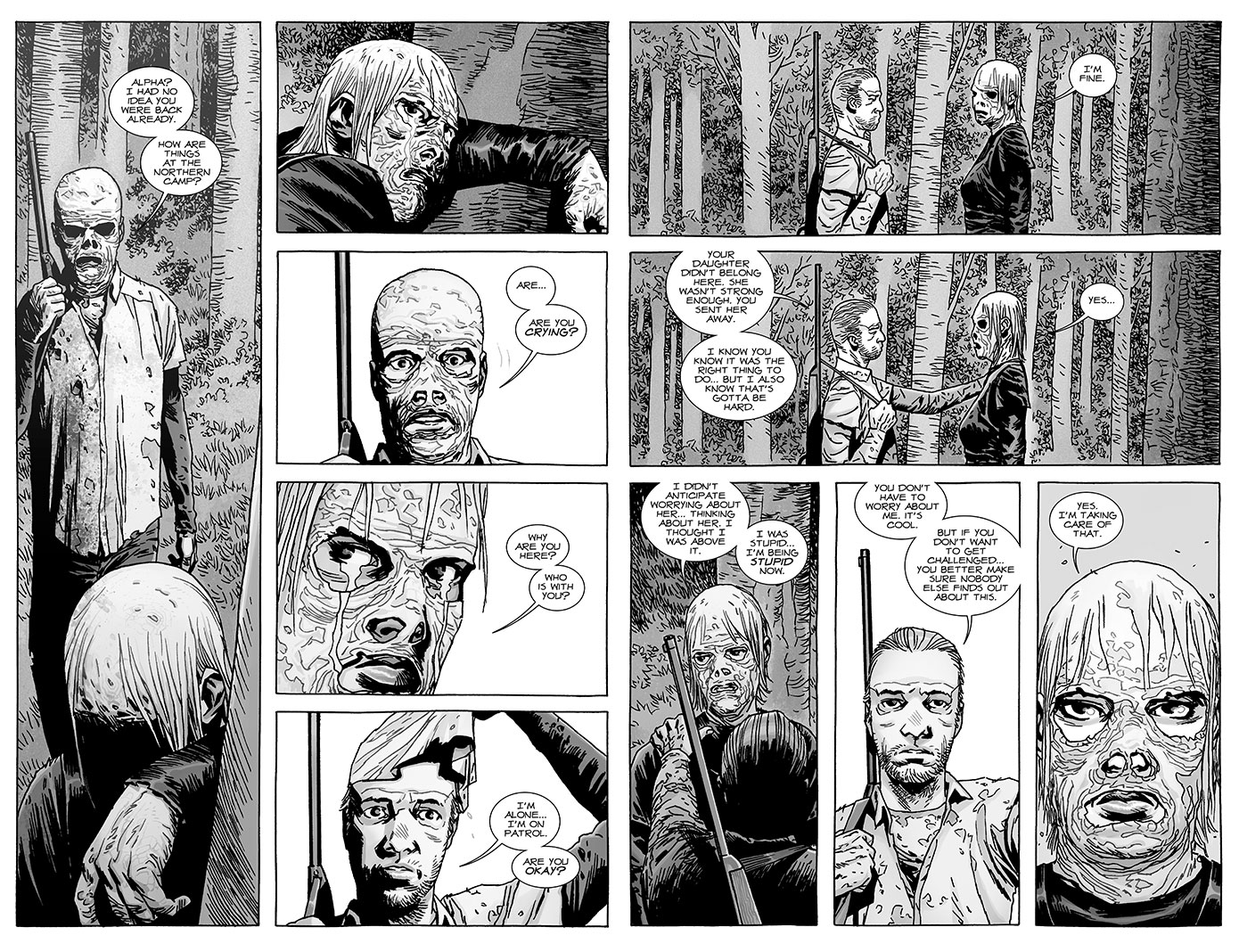 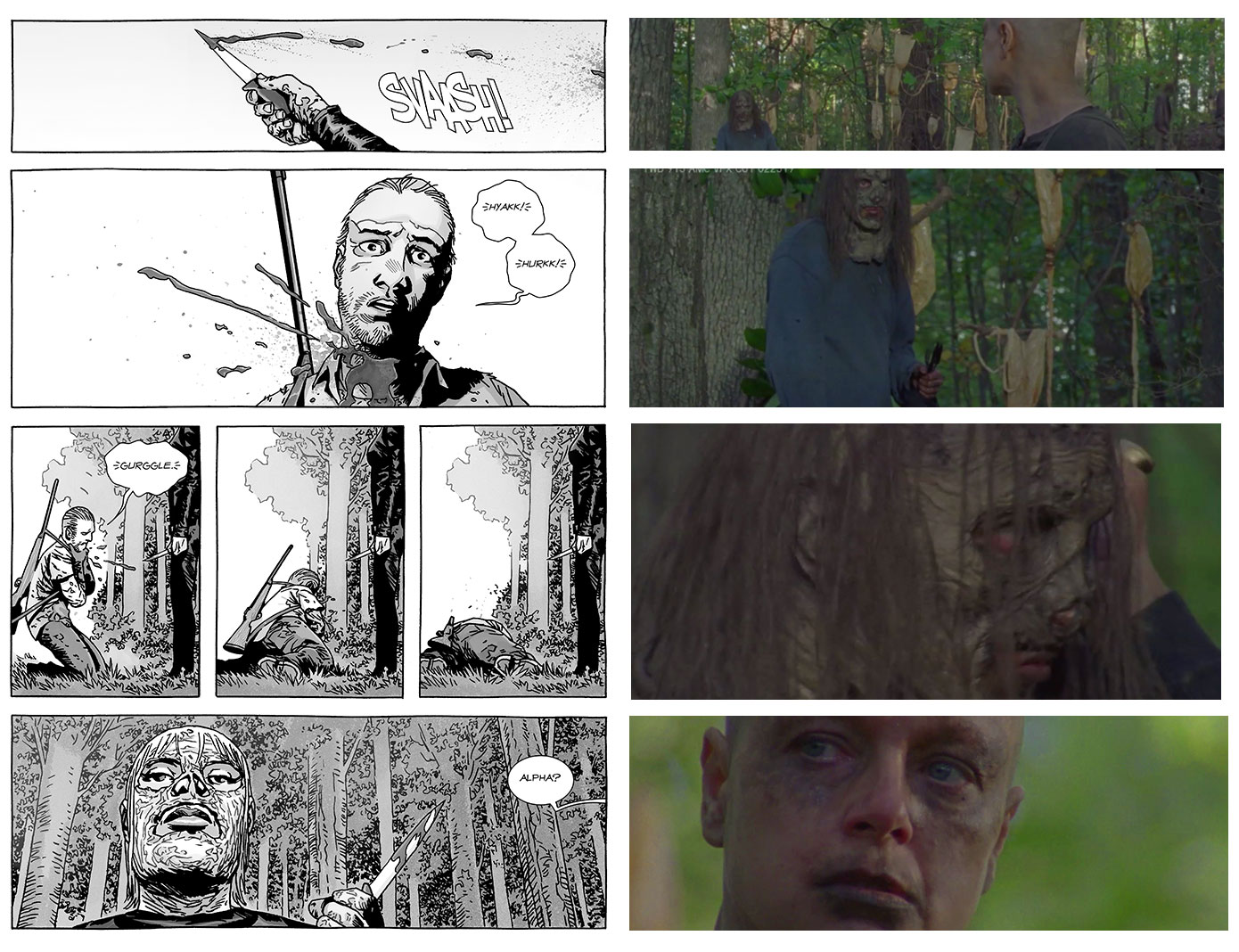 On to the most brutal moment of the episode – the heads on pikes. In the show, Alpha kills TEN of our survivors by beheading them and putting their heads on spikes. Siddiq, who was kept alive to tell their story, shows Daryl, Carol, and Yumiko the Whisperer border – WHICH IS MARKED WITH THE HEADS OF THEIR FRIENDS. We learn their identities through a juxtaposition of people asking where they are at the Fair (Spoiler alert – they dead). The victims include *deep breath* Ozzy, Alek, DJ, Tammy, Frankie, Addy, Rodney, Enid , Tara, and Henry.

This Red Wedding-esque scene is based on one of the most notorious scenes from the comics. In Issue 144, Alpha beheads not 10, but TWELVE of our heroes. And they are Olivia, Josh, Carson, Tammy, Luke, Erin, Ken, Amber, Larry, Oscar, Rosita, and EZEKIEL! The only common victim is Tammy, the rest are exclusive to the show. And in the comics, it’s Rick, Carl, Lydia, Michonne, and Andrea who find them, but in both instances, the groups break down in tears. 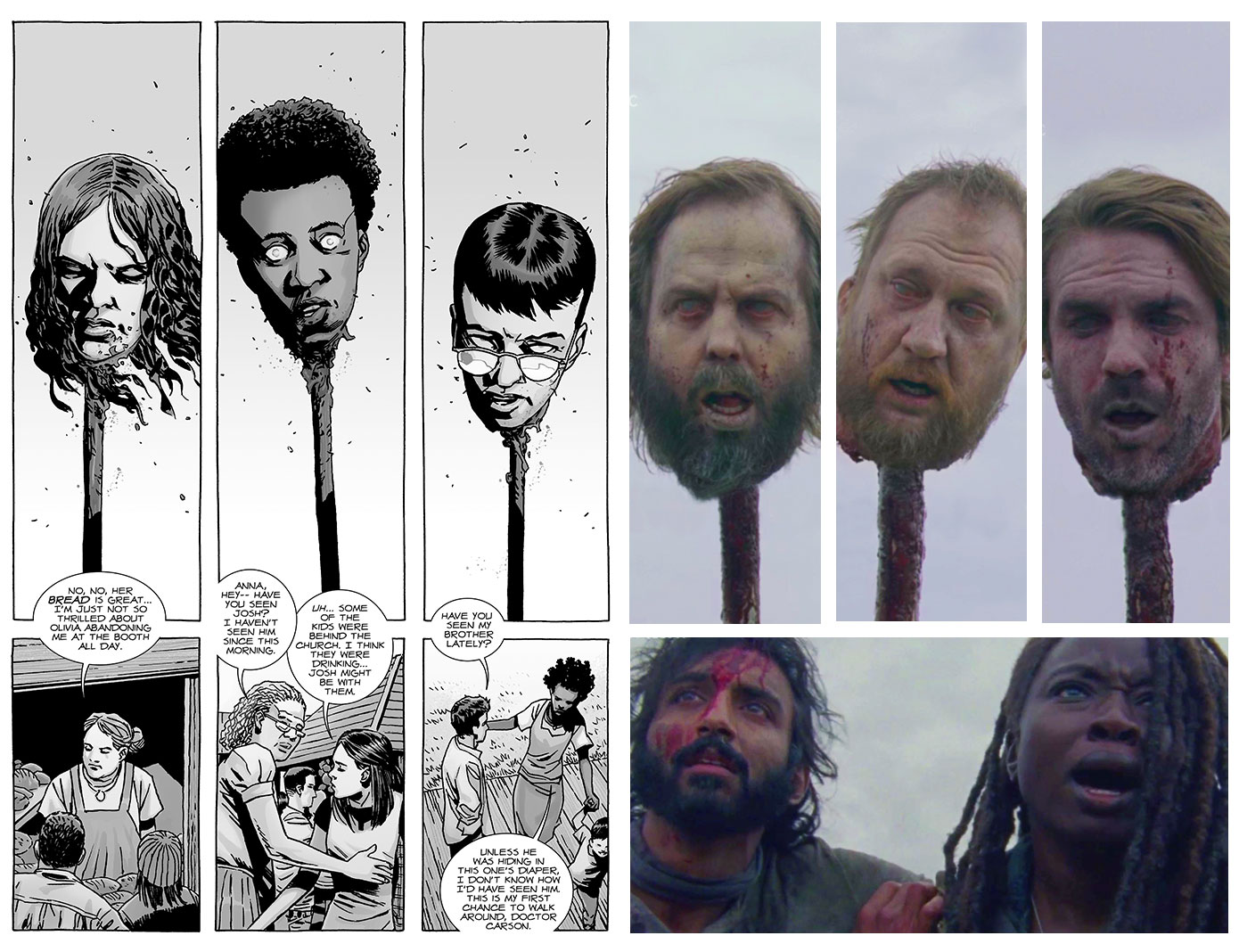 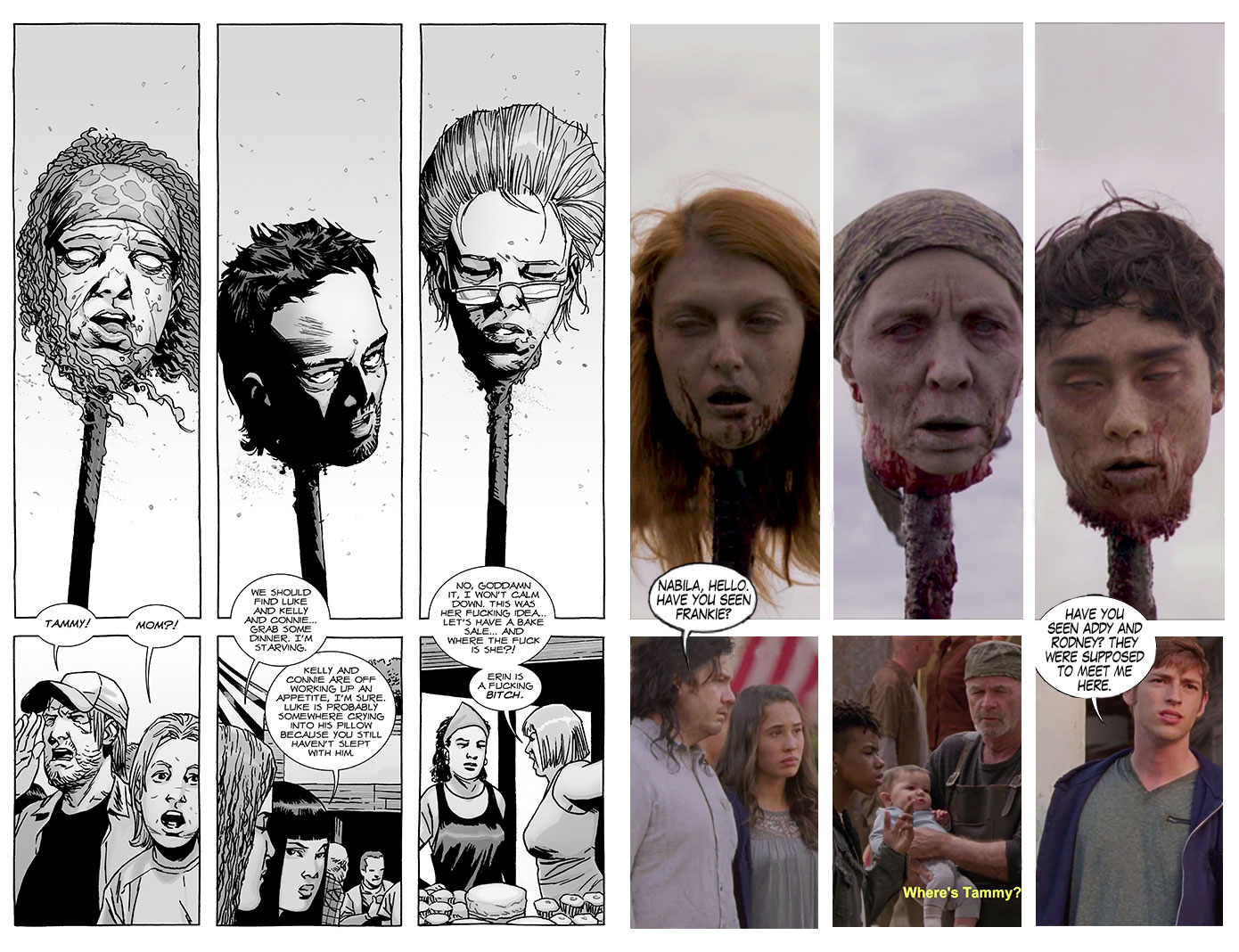 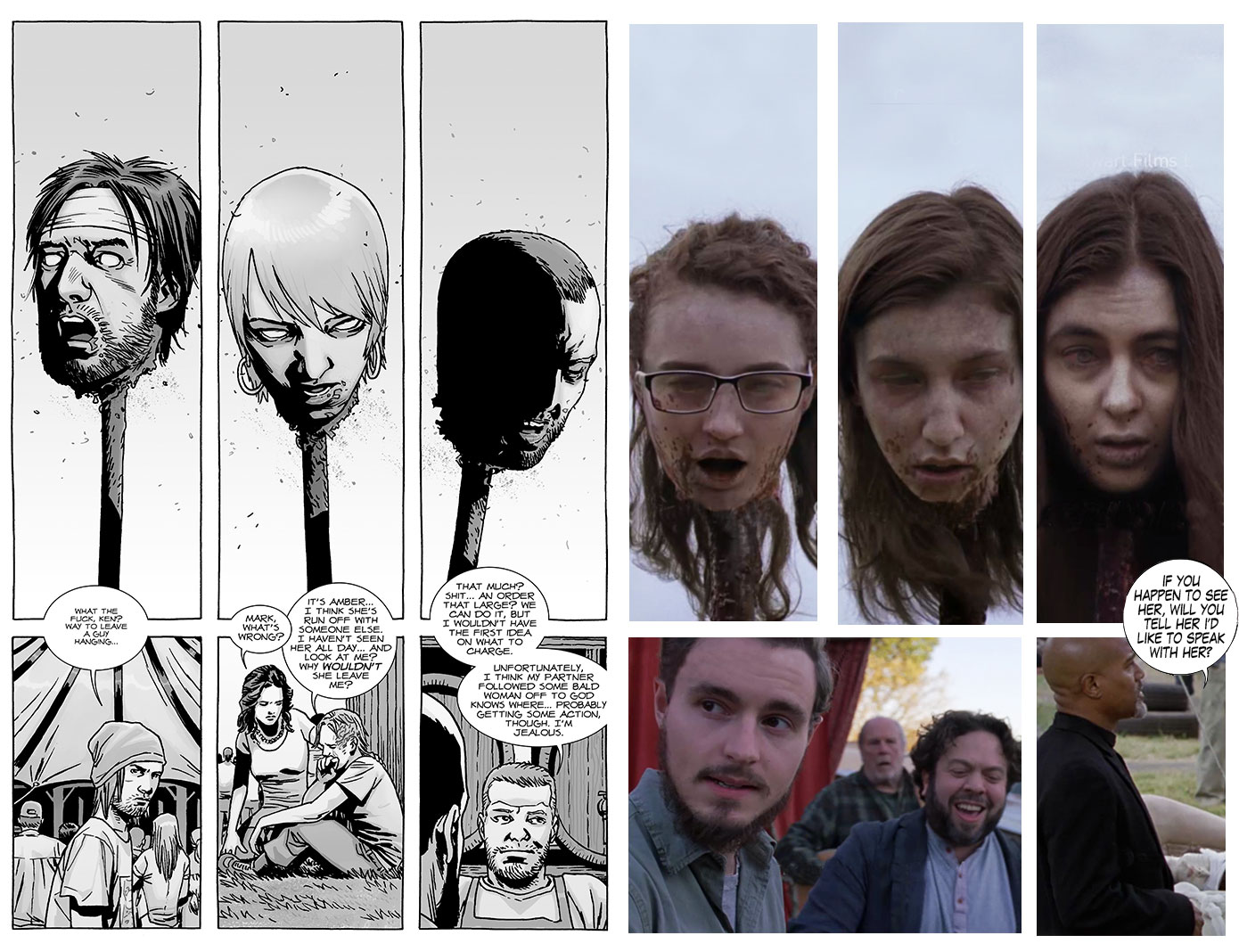 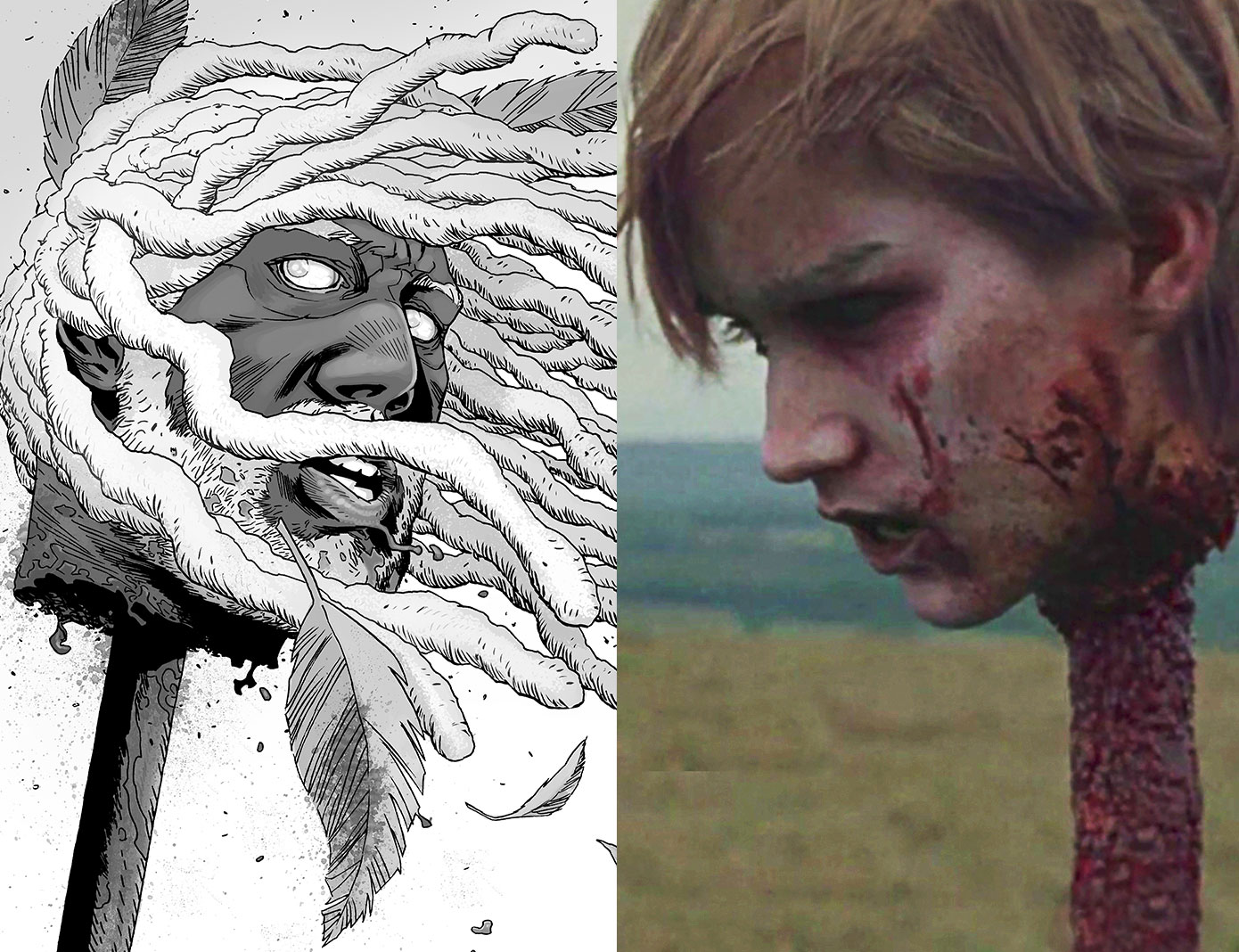 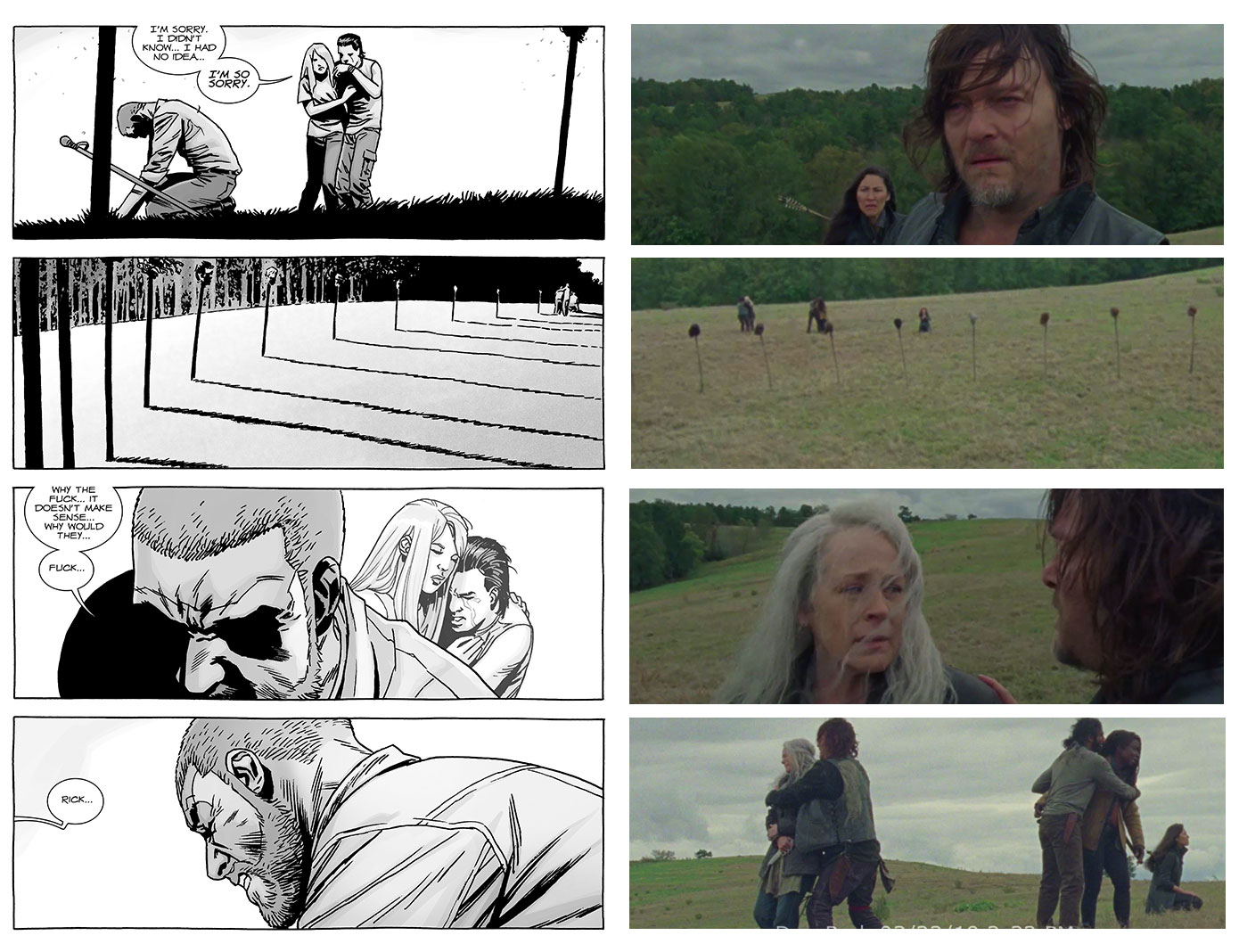 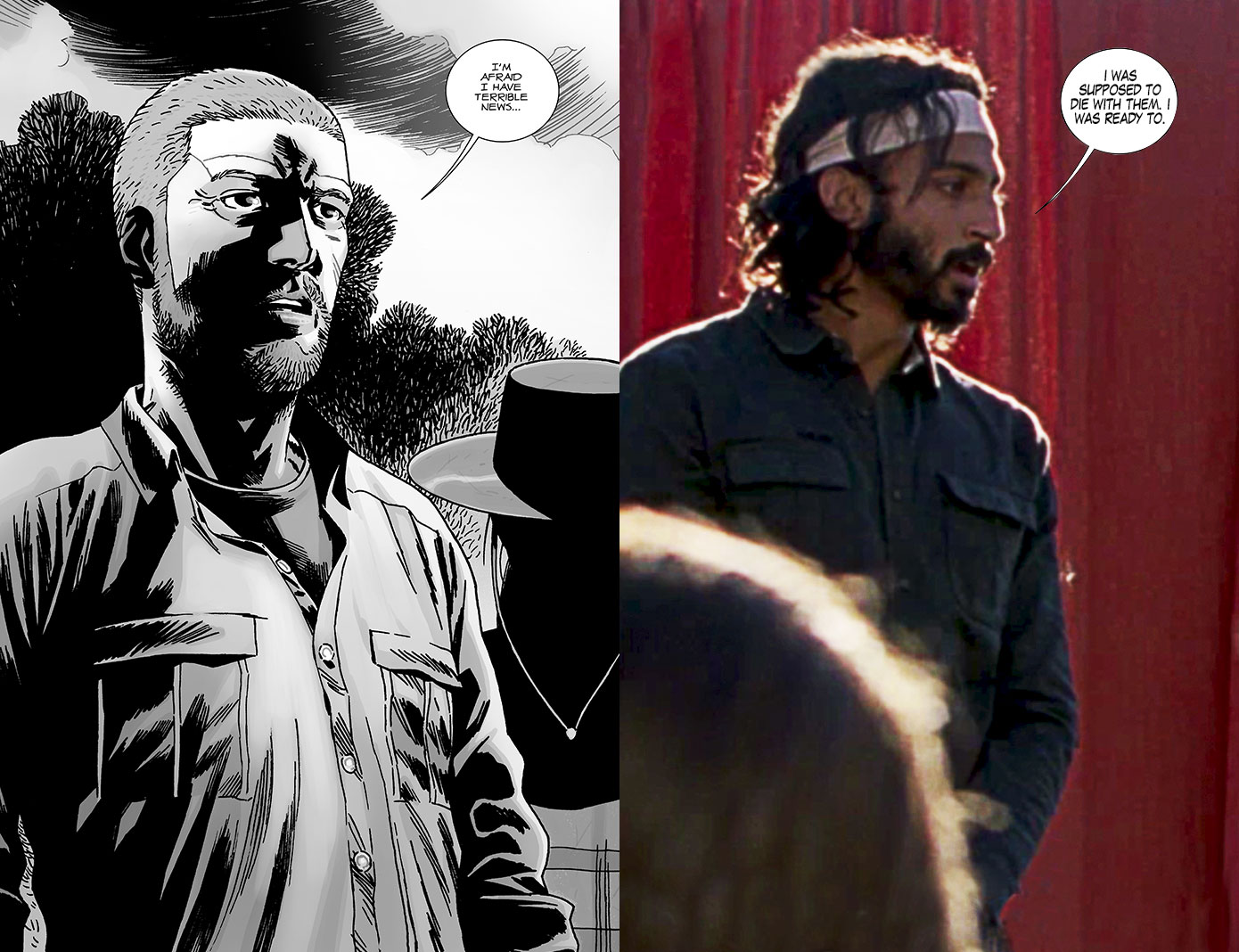 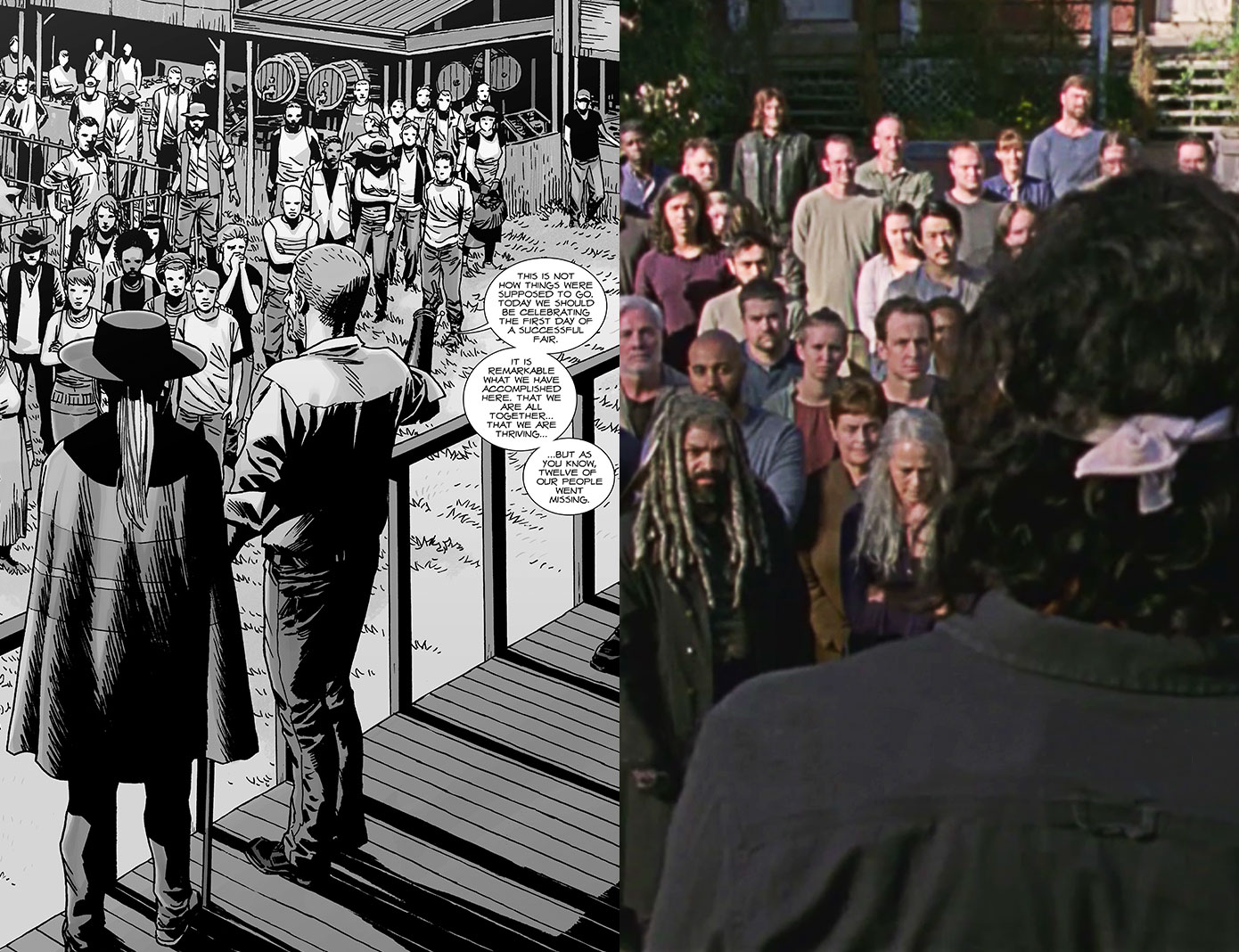 In the show, the gang returns to Kingdom and Siddiq delivers the terrible news about the deaths, and also announces that because of today’s events, Taco Tuesday is moving to Thursday. We know it doesn’t sound as fun, but this is our new reality. But really, he says how brave everyone was and how they should all remember the fallen. Later, Lydia and Daryl return to the spikes to pay tribute as snow begins to fall. Wait, it’s SNOWING?

In Issue 145 of the comics, Michonne jumps on Lydia right after they discover the heads and blames her for getting their people killed. Carl points a gun at her and makes her back off. Michonne then turns to Rick and demands they retaliate, but Rick tells her they’re going to wait and plan. Later, it’s Rick, not Siddiq, who addresses everyone at the Fair. The speech is a lot shorter than the show, and we never get flashbacks from how Alpha captured her victims. 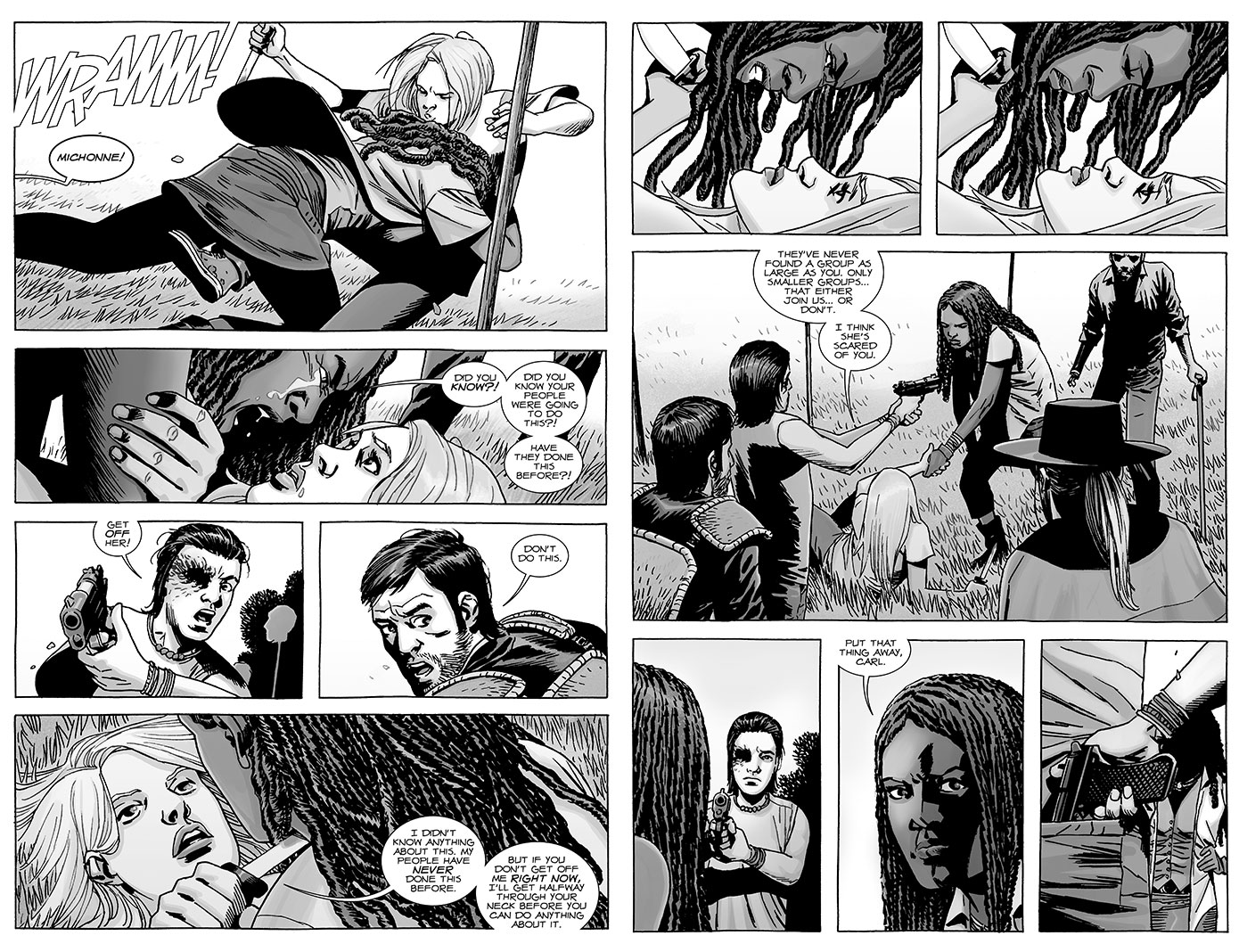 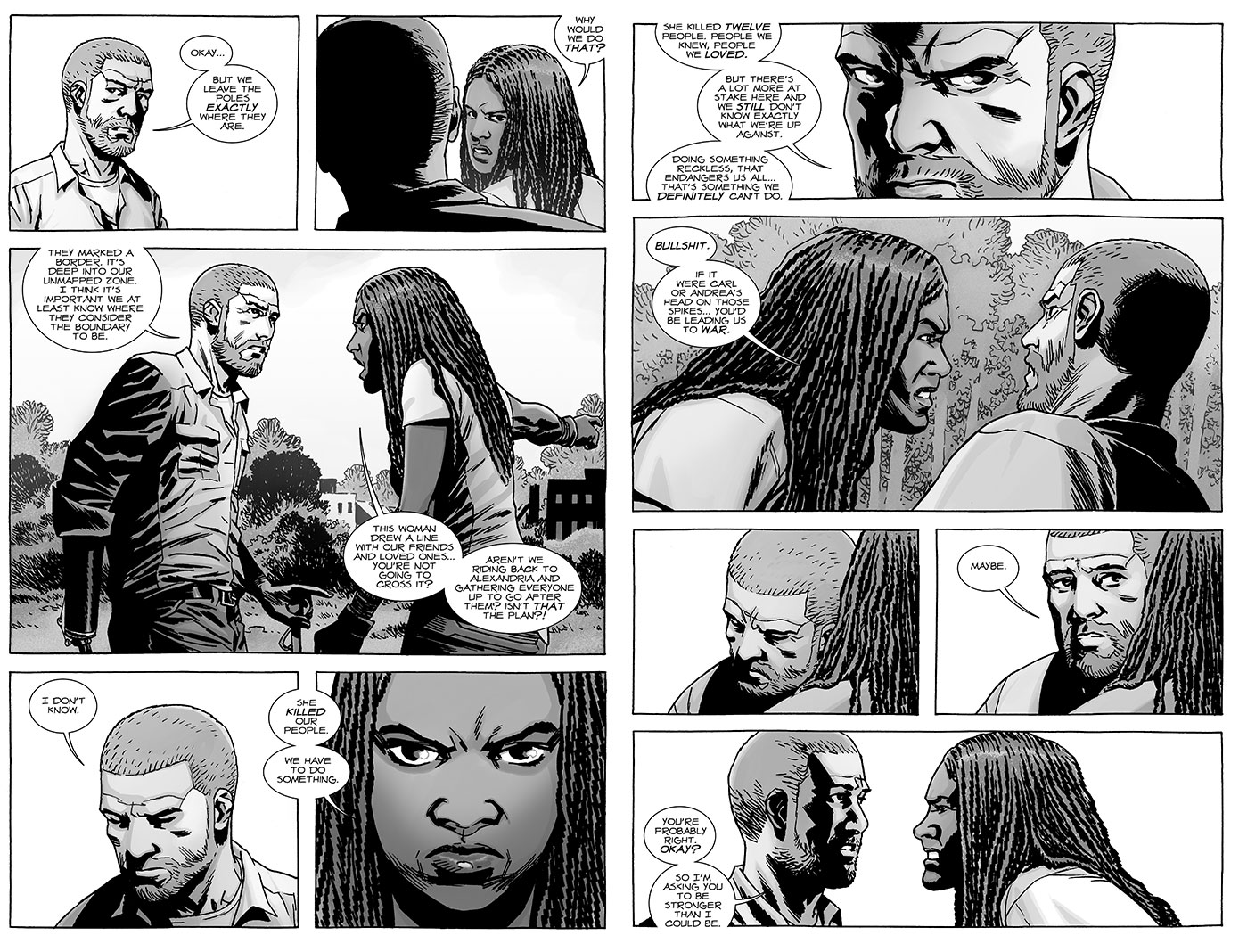 Other than all of that, the Hilltop Etsy couple, the charter, the movie, Beta, Dog!, the different victims, and the snow, the episode was nearly identical to the comics. And that uh, wraps up all the comparisons for Episode 915.

What did YOU think of all the comic comparisons this episode? Tell us in the comments below! 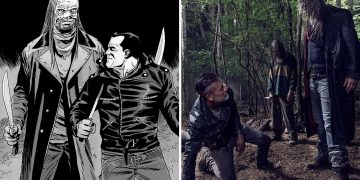 We compared all the ways The Walking Dead Season 10 Episode 5 borrowed from Robert Kirkman's comics. It's like Panel to Screen with more reading! 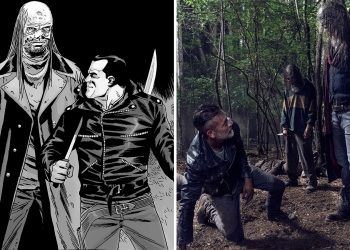 We compared all the ways The Walking Dead Season 10 Episode 5 borrowed from Robert Kirkman's comics. It's like Panel... 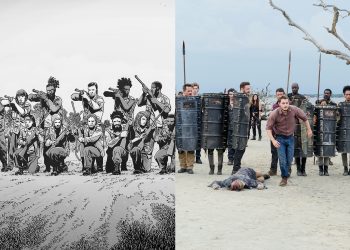 The Walking Dead Season 10 Episode 1 borrowed a lot of fun storylines from Robert Kirkman's comics, like the training,...