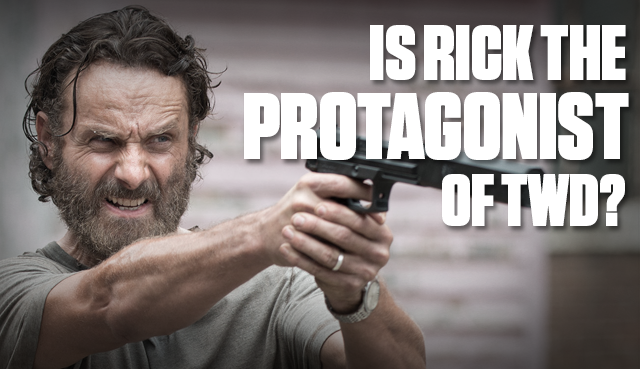 Is Rick Still the Protagonist of TWD?

Who is the protagonist of The Walking Dead show? It might seem like an easy answer. Obviously it’s Rick Grimes, the leader of the group, our eyes and ears since we met him in Days Gone Bye. But since Season 3, The Walking Dead has been veering away from Rick, pushing him toward the background.

Episodes of The Walking Dead often have multiple narratives running through them. Most memorable, perhaps, is the skilled weaving in Season 3, where Andrea and the Governor’s storyline in Woodbury intersects with and parallels Rick’s story in the prison. But although Rick takes a backseat during certain episodes, Season 3 is still firmly rooted in his struggles: is the prison safe for his family? Will they ever be able to settle down? Can he trust another group of survivors?

In Season 4, the series changes drastically. Although a few episodes are still told from Rick’s perspective (the season opener 30 Days Without Accident, for example) other characters begin propelling the narrative forward. Two episodes in a row focus on The Governor, and after the fall of the prison, Rick is off-screen for four more episodes (Inmates, Still, Alone and The Grove). Episodes in Season 4 begin focusing on secondary characters and the relationships between them, like Daryl and Beth, Tyreese and Carol, and Bob, Sasha, and Maggie.

And now, in Season 5, The Walking Dead has essentially become an ensemble piece. The story continues to be divvied up amongst characters, going whole episodes without a glimpse of Rick Grimes. Whereas Rick’s Season 4 struggle between Farmer Rick and Throat-Ripping Rick is the primary development spanning the entire season, in Season 5 Rick’s story is a minor conflict. Rick is still essentially Throat-Ripping Rick—the Rick who wants to gun down Terminus and murder the Hunters, who would rather storm Grady guns-a-blazing than make a trade with the group—but this story is just one of many. Rick has remained distant while other characters like Beth (RIP), Carol, Tyreese and Sasha grow and change in the forefront.

While Rick is still the leader of the survivors, he is no longer the sole protagonist of The Walking Dead. The show is now about a larger cast of characters, each one providing a unique perspective that enriches the world more than any single character could.

Let us know what you think in the comments below! Do you agree that The Walking Dead is now about an ensemble of characters? Or is it still all ’bout that Rick Grimes?

Home | The Walking Dead | Is Rick Still the Protagonist of TWD?

Behind the Scenes Photos: Midseason Finale