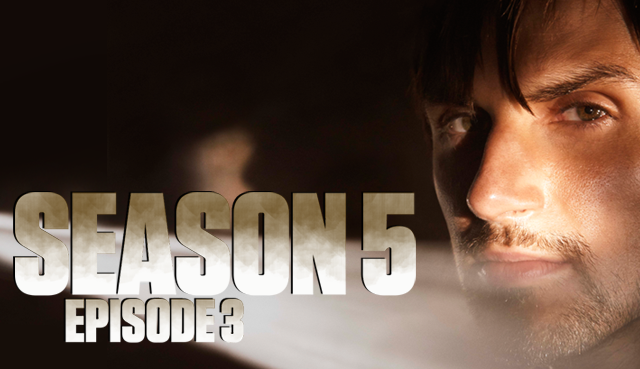 Episode 503: Four Walls and a Roof – Recap and Discussion

SUNDAY SUNDAY SUNDAY! It’s TWD time! Episode 503 (Season 5, Episode 03, if you’re confused why we always write the episode is such a weird way). This week’s episode starts off EXACTLY where we ended last week so let’s just jump right in (we’ll keep this a bit shorter than last week’s epic novel of a recap):

Gareth continues to lecture poor, stumpy Bob. The Hunters are camped outside a school, walkers locked inside, banging at the windowed doors. Gareth tells Bob that they marked their way there so they could find their way back (“So stupid, right? I mean back to what?”) but I guess that’s who left the marks that Morgan was following. Will Morgan be able to continue following somehow after this all goes down?

Gareth tells Bob how they were going to offer the Survivors a choice, to live with them or die. He expounds for a while on how he really wants to eat Carol, even though they saw her take off with Daryl, and how women taste better than men. When he says he wants to try Sasha Bob starts crying/laughing which turns into full-on laughter. They all crowd around Bob. “You idiots! Hahahahaha! I’ve been bitten you stupid pricks! I’m tainted meat! HAHAHAHAHA!” Everyone starts spitting their food and freaking out. “TAINTED MEEEAAAT! YOU EATING TAINTED MEEEAAAT!” Gareth kicks Bob, knocking him out.

Sasha goes looking for Bob. When Rick and Tyreese show up she tells them they were being watched. Rick thinks Daryl and Carol might be with Bob. When Sasha gets back to the church she gives Gabriel the business. She thinks he’s responsible for Bob’s disappearance and knows who’s watching them. She pulls her knife on him when he pleads ignorance.

Rick confronts Gabriel with the evidence: the scratches on the church, the girl with the glasses. Gabriel comes clean. He tells them how his congregation came to the church scared only to find locked doors (he always locks the doors at night). There were so many people that he was scared, and they just got louder and angrier, drawing in the walkers. They screamed at him as they died. “The Lord sent you here to finally punish me. I’m damned! I was damned before. I always lock the doors! I always lock the doors!”

Gabriel collapses to the floor when a whistle is heard outside. They look outside and see Bob. They run out, grab him, kill some walkers and get back inside. Bob tells them what happened, and where he was. He tells them what Gareth told them about Daryl and Carol driving off. When they offer pain pills to Bob he shows them his bite wound.

Gabriel tells Rick that the school is just a 10 minute walk away. Abraham tells him that they have to leave. That Eugene is in danger. Rick won’t leave without Carol or Daryl. Tara offers to go with Abraham if they’ll agree to stay one more day. Abraham says they’ll stay if Glenn and Maggie come as well. Glenn and Maggie won’t go. When Rick and Abraham almost come to blows over taking the bus, Glenn agrees to go with them if they’ll stay a day. All parties agree.

Rick makes the case for attacking instead of waiting. When Sasha volunteers to go, Tyreese tries to talk her into staying. So she can have as much time as possible with Bob. But she is just about revenge. She leaves Tyreese in charge of taking care of Bob in case he dies.

Rick and his team leave the church and head into the woods. As they exit to the left, The Hunters arrive from the right. They’ve played right into The Hunters hands…

The Hunters break in. The group is hiding in one of two rooms. Carl pulls his gun. Gareth tries to talk them out into the open. He knows who’s there. He knows Rick took most of the guns. They come to the locked doors. Judith starts crying, giving away which room they’re in. As they’re about to breach…

ZIP! ZIP! Silenced gun fire takes out the two guys by the door. Rick and his team have come back to the church. Rick tells them to drop their guns. When Gareth balks Rick basically shoots his hand off. Completely surrounded, they drop their guns.

Gareth: You could’ve killed us when you came in, there must be a reason for that.
Rick: We didn’t want to waste the bullets.

Gareth tries to explain what they’ve done. Rick just gives him the hardest stare on the planet. “You’d do this to anyone, right? Besides, I already made you a promise.” OUT COMES THE RED-HANDLED MACHETE. Rick, Michonne, Abraham, and Sasha slice and club The Hunters to death. The others kind of look on in horror. It’s a brutal world.

When it’s all over, Michonne looks down and finds her katana in one of The Hunter’s packs.

Rick is once again covered in the blood of someone he’s killed. “It could have been us.”

Gabriel comes out and stands in front of a blood-stained wall and views the carnage. “This is the Lord’s house.” Maggie: “No. It’s just four walls and a roof.”

The next day the group says good bye to Bob. Bob asks Rick and Judith to stay behind. Bob thanks Rick. And tells him that he’s sticking with what he told Rick on the way to the Food Bank. “Nightmares end. They shouldn’t end who you are.” He looks at Judith. “Just look at her, and tell me the world isn’t gonna change.”

Sasha watches over a sleeping Bob. He wakes up. Sasha asks him what the good that comes out of this bad is. Bob doesn’t answer. He’s passed away. Sasha pulls her knife. Tyreese walks in. “Give it here. Now.” He sends Sasha away and takes care of Bob.

Abraham, Rosita, Eugene, Glenn, Maggie, and Tara get ready to leave. Abraham gives Rick a map and they promise to follow. You can tell that everyone is a little uneasy about splitting up. They drive off.

Rick opens the map. The route is marked and there’s a note at the bottom:
“SORRY I WAS AN ASSHOLE. COME TO WASHINGTON. THE NEW WORLD’S GONNA NEED RICK GRIMES.”

Rick goes to help Tyreese dig graves. Rick, “I never asked how it was for you. Getting to Terminus.” Tyreese, “It killed me.” Rick, “No it didn’t.”

Late that night, Gabriel comes out front and finds Michonne on watch. He tells her that now that he’s come clean, he can hear the people screaming. Michonne tells him it won’t stop, but it won’t be all the time.

When a noise comes from the woods, Gabriel retreats back into the church and Michonne draws her sword. She walks towards the sound and Daryl comes out. Her smile fades when she sees how distraught Daryl looks. “Where’s Carol?” she asks. Daryl turns and looks back into the woods. “Come on out” he says and CREDITS!

WHAT?! Is he telling Carol to come out? Or who?!?! SUSPENSE!

And how many of you thought Gareth was the Big Bad this season? Show of hands, don’t be shy. I know it was most of you because I read your tweets and comments. But Gareth had a date with a promise, and Rick keeps his promises. Especially the killing kind.

As usual, the web team here will pick a favorite comment—maybe it’s super insightful, maybe it’s hilarious, whatever—and that person will receive the Walking Dead trade paperback of their choice (sorry, not a compendium you sneaky bastard)!

Home | The Walking Dead | Episode 503: Four Walls and a Roof – Recap and Discussion