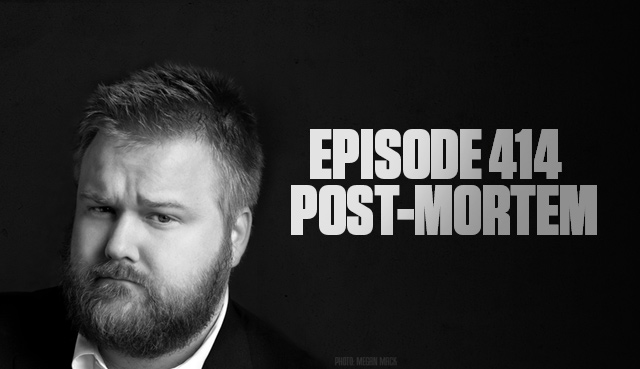 If you’ve managed to uncurl yourself from a sobbing fetal position after the emotional wringer of Episode 414: The Grove, maybe you’d like to hear what Robert has to say about it?

TheWalkingDead.com: OK, that was a REALLY big episode, emotionally. From the Lizzie stuff, to Carol trying to parent her and Mika, to the fallout with Lizzie, to the confession to Tyreese. It was like, I need a moment after watching it. Do you have any recollections from the writers’ room in regards to breaking this episode?

Robert Kirkman: This was a story that we always wanted to do, and it was adapting the Ben and Billy storyline from the comics. As we got further into the season and things started coming together, it really became a Carol story more than anything. I think a lot of that came from Scott Gimple, our excellent show runner, and I really think it was a good choice. In the comics, it’s Carl who ends up killing the other kid, but having it be such a emotional thing for Carol and having it be so intertwined with everything that was going on with her this season and everything that had been in her backstory for the life of the show, I think it really is just a testament to what can come out of working in this writers’ room and the tv process. This is another one of those moments where the events of the comic happened and existed, but everything that’s been changed for the show is definitely for the better. It’s shining examples of what can be done when we adapt things and alter things from the comic. And I think it turned out well. It’s definitely a gut-puncher of an episode.

TWD: Since Scott was kind of shepherding this storyline from the comic, is that why he wrote it?

RK: He had always planned to write this episode. It was a story he had in mind from the beginning and when you have that kind of a situation, it’s good to have the show runner actually write it because they have a specific vision of what they want out of the episode. If it’s given off to another writer, you can have things where they’re like, “No no no! You’re not getting that piece that’s in my head.” And so for Scott to step up and write this episode, even with his busy schedule, was really a great thing. Everybody knows that Scott has written some of the best episodes for the show, so anytime he says he wants take one I think everybody’s happy.

TWD: With Ben in the comics and Lizzie in the show, are their actions some kind of coping mechanism, or were they this messed up before the apocalypse?

RK: I think medically, that’s the kind of thing that just happens to people and is a part of them from the get go. I think that it can be heightened by this world, but the idea with that storyline is that there are sick people out there. In modern society, if there was a Lizzie or a Ben they would be in therapy for years and they would be monitored and there would be efforts taken to try to curb that behavior and prevent them from doing anything dangerous. Those options are not available in this world, and I think that’s another element of the zombie apocalypse that leads to interesting stories. What do we do when we have this person who is a danger to all of us, but they’re a kid and it’s not their fault, there’s just something wrong with them. In this world, that’s just kind of an impossible situation to be in.

TWD: In the comics, Carl steps up and kills Ben when the adults are unable to take action, which was kind of a really sad, child-like attempt at being a grown up and taking responsibility. Carl in the show seems a little too old to get away with this. Was this part of the decision to switch this to Carol or was that just a matter of how the groups are split apart?

RK: It made more sense from a writing standpoint to have it fall upon Carol, especially when she lost Sophia, that was a major change to the character. In the comics, Carol doesn’t lose Sophia, and there’s just too much story potential in the idea of this mother who loses her daughter and then has a surrogate daughter that she then has to kill for reasons beyond her control. There’s too much good story potential there to avoid that. And once we hit upon that, it was pretty clear that that was the direction the story would go. There are certain things on the road to Carl’s evolution that are important benchmarks that push him along on his journey, and the Ben and Billy situation was definitely one of them, but the show is doing well and is theoretically going to go for a while, and there are a lot of things Carl’s going to have to do that can replace that situation and affect him in possibly better ways. There’s always room to explore those possibilities, and I don’t really feel like I lost anything by taking this situation from Carl and giving it to Carol.

TWD: These events have been teased for a while. Was Lizzie always going to fall into this Ben role from the comics?

RK: That was by design. She was the one who was feeding the rats to the zombies, she was the one dissecting animals in the prison, so that was something that was building in her character from the start. And you have to hand it to the fans, there were definitely fans on Twitter who were like, “Wait a minute, Lizzie’s crazy. Are you going to do that Ben and Billy story with her?” after, like, the second episode aired. So that’s always cool, though in a sense you’re always like, aw man, they’re onto us! But with the show being an adaptation and the comics being available, there’s certainly clues out there that people can find in the comics that will indicate possible story points for the show. Sometimes they’re right and sometimes they’re massively wrong, which is always fun. But I think there’s a fun game to play for the fans to actually read the comic book and try to figure out if we’re adapting a certain story and what direction it’s going to take. I think that’s a cool aspect of how we adapt stories so that they’re not 100% faithful and have new elements added in.

TWD: I think we’ve seen a lot of that in Season 4 so far.

TWD: The show continues to pull out a crazy new zombie every few episodes. The moss zombie earlier this season. This week, charred, smoking zombies emerging from the forest. Is there a conscious decision to sit down at the beginning of the season and come up with new walker designs for the season, or is that just something that Greg Nicotero comes up with each episode?

RK: It always starts in the writers’ room. We’re always trying to come up with new and interesting and cool things that play up the uniqueness of what would happen in this world, like the moss zombie for instance. The idea was that these zombies don’t really move that much unless they’re provoked, and if one were to be pinned near a tree, it would be like one of those dead bodies that are left in the woods and have trees grow through. So the writers do come up with some stuff, but I will say that Greg is the master of his craft and is often improving any ideas we come up with and is definitely suggesting his own frequently. Between Nicotero and his team at KNB and all the writers, we’re always trying to one-up each other and always trying to come up with that next iconic zombie that AMC can make a DVD case out of.

TWD: I like that thinking. That’s some George Lucas thinking right there. So, last question, what can we expect in these last two episodes? Early on there was a lot of talk about a jaw-dropping episode coming up. This was pretty jaw-dropping. Is this the episode or does it get even more crazy?

RK: There are some moments in the finale that I think are some of the coolest stuff we’ve done in the show, and that’s the stuff I’m really excited about. We’re wrapping this season up in pretty great form. I think, coming out of this episode, people are gonna see how high the stakes are and how crazy things can get in this world, and we’re going to continue that is these next two episodes. There’s quite a bit of shock coming and I think people are going to be pretty startled with what happens moving forward and are definitely, definitely going to be anticipating the return of Season 5, which we’re working on right now and I can say is going to be pretty awesome. I think people should stay glued to the couch for these next two episodes, they’re going to be pretty cool.

Episode 414: The Grove-Recap and Discussion