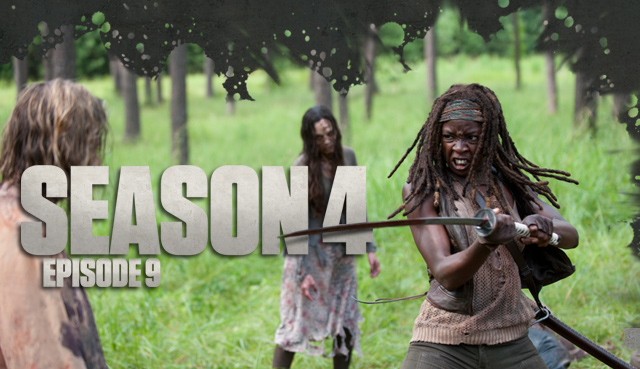 We are BACK! Based on Tweets we get [twitter.com/TheWalkingDead] you’d think The Walking Dead had been off the air for about 3 years. But we love the love! Let’s get right into it!

After the almost complete destruction of the prison in episode 408, our group is scattered. The episode starts with Michonne, returning to the prison. In order to walk safely around, she created two new pets. She quickly comes across zombie Hershel head and it is gnarly! She stabs his brain and puts him out of his misery, gently placing her hand on his hand to pull her sword out. She leaves the prison and we hit the credits.

We come back to Carl and Rick. Carl is motoring but Rick is in BAD shape from his fight with the Governor. Eye almost swollen shut, gash in his forehead, gunshot, rasping for air. They come across an abandoned restaurant. When Rick tells Carl to stay outside Carl insists on entering with him. They come across a walker that’s been left behind. Rick picks up a hatchet but doesn’t hit hard enough to kill it. Carl shoots it in the head, ignoring Rick’s order not to. There’s a lot of teen angst and rebelling against authority happening.

They continue on into a neighborhood and find a house. It’s clear, and it’s clean. Carl looks amazed when he comes across a teenagers bedroom. TV. Xbox. Games. Worthless. He scavenges the cables from behind the TV. Rick and Carl fortify the front door against walkers and bunk down. Rick goes into the bathroom and we see how hurt he is when he takes off his shirt.

Michonne, who’s been tracking Rick and Carl, is dreaming. Her memories are colliding as she dreams about her boyfriend and his brother in her apartment, arguing about the apocalypse while Michonne holds their son. The dialogue implies that there was an argument about whether they should stay in place or keep moving and you get the impression that whatever decision they made, it was the wrong one. The dream ends with Michonne seeing her boyfriend and his brother as armless pet walkers and Michonne wakes up screaming in an abandoned car.

Carl wakes up and finds Rick out cold. He makes breakfast, reads and checks on Rick, who is somehow still asleep. Carl tries to wake him up, but he won’t come to. He starts yelling at Rick, attracting the attention of some walkers outside, who start pounding on the door. Carl heads outside and leads them away from the house so he won’t draw more to the house. As he walks backwards, a third walker unexpectedly appears behind him. He trips, but manages to kill the walkers as they collapse on top of him. He wriggles out, pukes, looks at the bodies, and says, “I win.”

Alone in a relatively walker-free town, Carl heads back to the house. He tells his unconscious father what happened and then starts in on him, blaming him for everyone they lost at the prison. Carl tells Rick he’d be fine if he died and then heads off for supplies. Inside the first house he comes too, Carl runs into a walker. After a prolonged struggle, Carl loses a shoe but manages to escape, locking the walker in a bedroom. He takes a piece of chalk and writes on the door: WALKER INSIDE. GOT MY SHOE, DIDN’T GET ME. Again Carl’s been tested and again he’s survived. He takes a giant (GIANT) tin of pudding and sits on the roof and enjoys it.

While he does this, Michonne ambles along with a herd of walkers, kind of mindlessly moving with them. She grows increasingly disgusted and distraught (maybe it’s the constant moaning, maybe it’s the woman that reminds her a bit of herself). She can’t take it anymore after a while and starts dispatching walkers. A LOT of them. An entire herd, ending with her two new pets, and breaking down in tears.

Carl wakes up in the night, Rick is now rasping and gurgling and starting to move very slowly. Carl pushes away from the couch, pulls his gun, and as Rick reaches for him, he decides he can’t kill him, even if he’s a walker. Of course, after realizing this, Rick speaks. He’s not a walker after all. Carl’s bravado breaks down and he admits that he’s scared as Rick passes out again.

Michonne tracks Rick and Carl to the gas station, where she finds the walker they killed. Something about the note that was left behind causes her to break down again. She talks to her boyfriend. She says that they could’ve all made it.

Rick is awake back at the house. Carl fills him in on what happened. Rick apologizes for not being there. Carl says he doesn’t have to.

Out on the street, Michonne comes across a giant (GIANT) empty tin of pudding, which leads her to the house Rick and Carl are at. She sees them through the window and relaxes and cries again (lots of crying for Michonne this week). She knocks. Rick looks through the peephole and starts laughing. “It’s for you” he says to Carl. Credits.

It’s great to be back!
What did you guys like, what did you dislike?
Did anyone else get a craving for chocolate pudding?

The BEST/COOLEST/FUNNIEST comment below will win a shirt! This is not determined by upvotes! Lizzy and I will be picking the one we like best!

CLICK HERE to see a comparison of the comic to this episode! Pretty cool to see how faithful it was!

CLICK HERE for our discussion with TWD creator, show executive producer, and writer of this episode, Robert Kirkman!