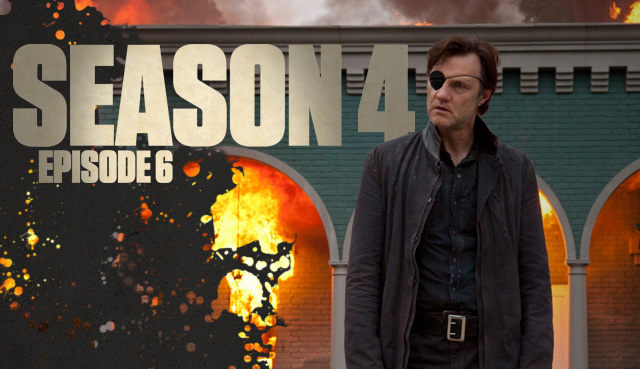 It’s the return of everyone’s favorite democratically elected official! Tonight’s episode draws HEAVILY on the Governor novels from Robert and Jay Bonansinga, specifically the first one, Rise of the Governor. Like the comic though, there are some noted differences, which help keep things interesting.

At the episode’s outset we see that the Governor split from his remaining men and returned to Woodbury and torched the entire town. So anyone wondering why that hasn’t been re-inhabited, well, now you know. Time passes, and we see the Governor shambling through the apocalypse, bearded, wild-haired, generally not caring about much.

It’s in this state that he chances upon a family, the Chalmers: sisters Tara and Lilly, Lilly’s daughter Megan, and their infirmed father (late stage lung cancer, unable to walk, almost out of oxygen). After surrendering his weapons (and giving his name as “Brian Hariot”), the Governor stays the night. His behavior is somewhat odd, and refused comfort, dumping his Spaghetti-Os out the window.

After helping Chalmers to his bed, he sends the Governor upstairs to fetch a backgammon set, letting the Governor know that it’s occupied by walkers. The Governor finds an amputee walker in the bathtub, the apparent victim of a suicide attempt. He takes the man’s pistol and returns with the backgammon.

The Governor returns to his room and takes a picture of him his wife, and his daughter and folds the picture, obscuring himself. When Lilly arrives in the morning he’s quick to hide the photo.

Lilly asks the Governor to go to the old folks’ home to get an oxygen tank for her father. It’s not a pretty site. Geriatric walkers. He does a pretty good job just maneuvering around them, until they swarm him when he has a cart full of oxygen tanks. He still makes it out with two.

He drops the tanks off, and hastily retreats to his room. Lilly, thankful for what he did, comes to his room to patch up a cut on his head. She leaves Megan alone with the Governor when she goes to get ointment. Megan asks about the Governor’s eye and the two bond, when Megan pinky-swears to not tell anyone.

Some time passes and we see a clean-shaven Governor teaching Megan how to play chess. Lilly and Tara’s father has gotten worse and passes away. They don’t understand how quickly the dead reanimate, and when he does the Governor brutally smashes his head in, much to the confusion of his daughters. The Governor buries him.

When the Governor comes back inside Megan is afraid of him but Lilly. Tara thanks him and offers a reconciliatory fist bump. The Governor goes back to his room and burns the picture of his family.

He tries to slip out but Lilly stops him and tell shim that they’re going with him. That night in the truck, the Governor and Lilly get, uh, intimate.

Later (possibly longer, the time line isn’t necessarily definitive) the truck dies. They set out on foot but come across a herd. They drop their bags and run, the Governor picking up and carrying a scared-stiff Megan. They escape into the woods.

As they run across a field the Governor and Megan fall into a rectangular ditch, complete with walkers. The Governor absolutely destroys the walkers and promises Megan that he’ll never let anything happen to her.

Right as the episode ends, Martinez, the Governors’ former right-hand man, arrives, surprised at what his walker trap has caught.

I’m legitimately curious what everyone thought of this episode. Is this the first time we haven’t seen ANY of our protagonists?

Is the Governor changed? Aside from being a little sullen, moody, and a bit frightening, he wasn’t exactly evil in anyway. What do you guys think?