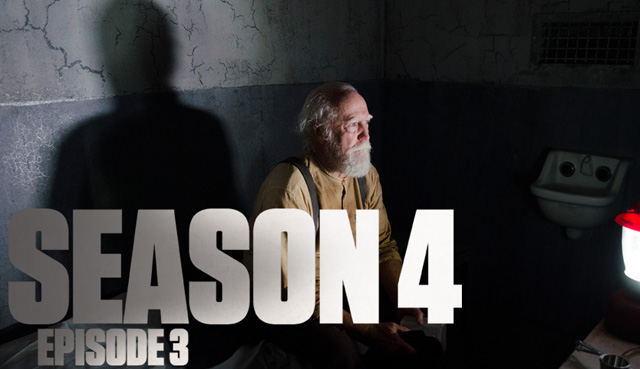 Hey all! It’s show night! Let’s get right into it!

This week starts off exactly where we left it last week: Tyreese has found the burned remains of Karen and David. He’s understandably upset. When Daryl tries to calm him down, Tyreese slams him against the fence. Then it’s Rick’s turn to intervene only he gets a knuckle sandwich for his troubles. This leads to him knocking Tyreese out with a flurry of punches. Rick gets a busted up hand and Tyreese gets a pretty messed up face. This echoes a pretty bad brawl Tyreese and Rick have in the comic, so it’s good to see on the screen.

Following this we see more and more people getting sick, including Glenn, Sasha, and Caleb (Dr. S). The council has decided to separate the children from everyone else to keep them safe. Carl, Beth, and Lil Ass Kicker are among them.

Daryl, Michonne, Bob, and Tyreese (after convincing from Sasha) head off to a veterinary clinic 50 miles away that may not have been ransacked like the hospitals and clinics. On the way, they’re distracted by a mysterious radio signal, a woman’s voice talking about sanctuary. This distracts Daryl from the road, leading to the car getting stuck on a body of walkers, being surrounded by a super herd of walkers, and Tyreese going to TOWN with his hammer. Tyreese’s epic zombie killing therapy will be familiar to comic readers.

The group leaves Tyreese behind, completely surrounded. It’s not long before Tyreese breaks through the bushes and reunites with them, exhausted, covered in blood, but not bitten. The group high-tails it through the forest.

Back at the prison, Hershel realizes he can maybe make a tea that will help alleviate the symptoms and prolong the lives of the sick but he’ll have to forage outside the fences for ingredients. Carl sees him leaving the prison and refuses to let him go alone. While in the woods we get a glimpse of Carl’s growing maturity.

After getting what he needs, Hershel breaks quarantine and selflessly goes into the sick block to help everyone.

Not to be totally left out, Rick investigates the burn site, looking for clues. He finds a hand print on the door jam. While he’s inside Carol is outside trying to clear the water pump. Rick returns to the yard to find her quickly being surrounded. With Rick’s help, Carol is able to get back inside the fences safely. Once there Rick asks Carol, “Did you kill Karen and David?” Carol simply says “yes” and walks away.

How sweet was that tree-trapped moss-covered walker half-way through the episode? They showed a tease of that at New York Comic Con. Great idea.

Who burned the bodies?

Is Daryl getting through to Michonne about seeking out the Governor?

What are we going to do about Carol?

WHO THE HELL IS BROADCASTING A RADIO SIGNAL ABOUT A SANCTUARY?!

To win a shirt, I want to hear what the #1 lesson we learned about zombie survival was this week. Educate! Survive! Upvote comments you like!

This week’s winner: Dani, who mentions two things I like: 1) Keep your eyes on the road. A few people said this but I think Dani said it first. I first came across this concept in The Stand. You never know when you’ll come across an abandoned vehicle in the middle of the road and in the apocalypse, a broken bone can be fatal. 2) What IS up with that herd? What attracted them there…

The All Out War Game Jam: The Finalists