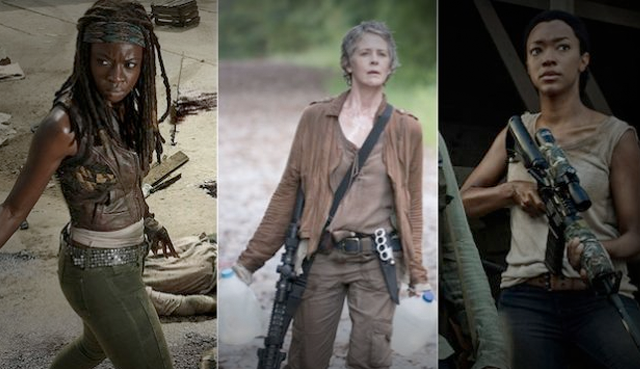 Dressing Women for the Apocalypse

Earlier this week, Jezebel posted an awesome interview with TWD Costume Designer Eulyn Womble, where she talks about the challenge of turning weathered garments into memorable statements about each unique character.

Eulyn, your hands are stained red. Should I worry?

Oh, it’s just another day on the set of The Walking Dead. And it’s just some makeup stuff. I’ll wash it off later with shaving cream.

Your job is to convey the story of post-apocalypse, but the survival situations on The Walking Dead are increasingly dire. How can you continue to add points of interest to the costumes when life for the characters has so obviously deteriorated?

I have to work harder to make a statement quickly. We all get the scripts and every eight days we shoot a new episode. So for instance, we started at 5:14 yesterday, and kept shooting all day.

We didn’t have a lot of time at Terminus, I’m still amazed how we were able to tell that large of a story in only an hour. I worked with the signs on the walls, they told part of the story. I used color, browns and blues—earth and sky—and I tried to make the texture of the costumes a pattern instead of using actual patterns. I tried to tell a bigger story with all of the costumes.

Even if it’s in small ways, things change. I think I can talk about this now—especially with Daryl—we call it Frankensteining on the set. So Norman [Reedus, who plays Daryl] might say, “Can you Frankenstein my pants?” If you need a sleeve or glove, we pick up one more and then just sew it on. The costumes are evolving. Or at least I hope they’re evolving. It’s still too close right now to regular life. It’s going take at least ten to 20, 30, 40 years for it to completely devolve, and then evolve again.

In a similar vein, when the surviving cast members are so obviously beaten down by circumstance, how can you convey that they’re even interested in their clothing at all? Are they?

I think Michonne’s boots with the studs sum it all up. She’s always able to kick the crap out of something. As girls we’re not as strong as boys, but we’re able to kick, and I think that’s what her boots represent. Her boots will be able to protect maybe not in the real world. She is sexy and wears her clothing close to her body—not to attract anyone, but because it’s easier to fight and run, and because that way zombies can’t grab her.

Also, everybody has their jobs, and I think that shows in their clothing. Everyone’s clothing represents where they are now. Beth isn’t a natural guard, so she does what she is best at.

Daryl can’t help but be a rock star. Michonne Has an “M” necklace—it’s her emblem. I like to think it was a gift from her boyfriend. It’s like Superman’s ‘S’ in my mind.

Rick stole the jacket from a guy he killed, probably because he liked it, but he also needed it. I think you have to be cooler and cooler when you have nothing and have to make do with what you have. If the jeans rip we just fix it. We turn horse blankets into ponchos. My own upbringing didn’t have a lot of money. I would buy cheap things and make them fabulous—people thought they were designer.

Check out the full interview here!

Home | The Walking Dead | Dressing Women for the Apocalypse