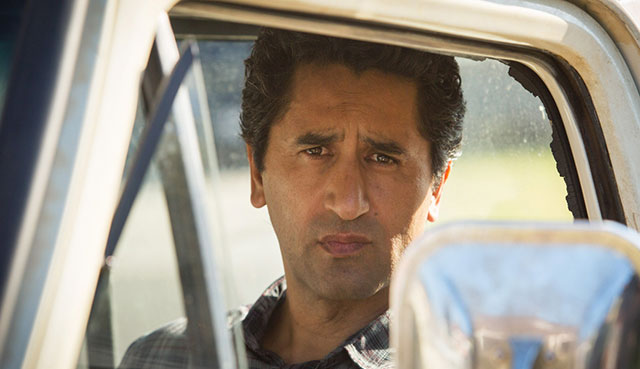 Raising teenagers is difficult; especially if one of them has a heroin addiction and you’re all living in the middle of the zombie apocalypse. Cliff Curtis, who plays the optimist father Travis Manawa, spoke with AMC about being positive during the end times, what he would take with him in a real apocalypse, and how it all affects L.A. traffic.

Q: What do you believe your character’s greatest strength is? And weakness?

A: He’s an idealist coupled with being an optimist. He has this idea of how things should be. He believes in community, structure and things that give him the freedom to live a relatively simple life. It’s a strength, but it can also become a weakness. When things start falling apart and all of his ideals are challenged, it’s just a matter of how long it will take to realize that all of his ideals can’t apply to the situation.

Q: L.A. traffic is bad enough – and even worse when people are rioting and trying to flee town. What was it like to film the scenes where you’re driving through all of that? Did it feel super realistic?

A: Traffic in L.A… well that’s a part of living in L.A. In this situation, production staged all of that and it did feel super realistic. I really like that because you can imagine normal traffic in L.A. and then all of a sudden, it’s gridlock. How crazy would that be?

Q: Fans have their own methods for trying to predict what is going to happen on a show. What do the actors do? Did you have a guess for where Season 1 would go? How far off the mark were you in the end?

A: You never know! We’re not making it up when we say, “We have no idea.” We’re not trying to be clever. We honestly don’t know. [Laughs] It’s all a part of being a part of a genre like this. No one should know because every danger is potentially the last one you’ll face and that’s the premise of the show.

For the rest of the interview, head over to AMC!