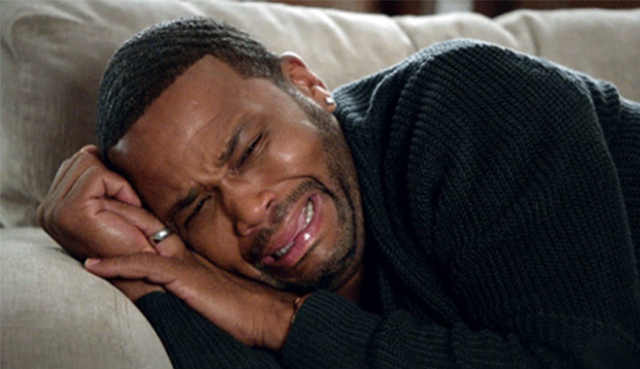 Fear the Walking Dead’s two-episode premiere delivered the most shocking death of the series. Below we compiled fans’ reactions to that harrowing moment.

@FearTWD Travis dying broke my heart. I never wanted him to ever die. How can we go on? We will have 2. It's rough though.

Travis my beautiful baby boy, WHAT HAVE THEY DONE TO YOU!?!?!? #FearTWD pic.twitter.com/lLNxtgjxkr

Travis dead. I am having a hard time processing this. This can't be… #FearTWD

Ughhhhhhh of course right when I start to like Travis they go and kill him off #FearTWD @FearTWD pic.twitter.com/i8VA22dZbs

Whose idea was this? Should have known since he turned awesome. RIP Travis! I just started to like you! #FearTWD #Fearthewalkingdead pic.twitter.com/3dXozYYqSD

No oh no, Travis, I thought you had main character immunity, esp after we lost Chris last season… #FearTWD

Holy crap I did not expect that. I thought Travis would be the new Rick after the Pit! #FearTWD

I'm so mad they killed travis that way #FearTWD pic.twitter.com/pe7ABvhUm7

How could they go up higher & get shot at? Why Travis gotta die? I don't wanna accept this! *show denial* #FearTWD

So, Travis is dead? Didn't see that coming #FearTWD

As far as Travis is concerned, I'm going to need to see an official death certificate to accept this. #FearTWD pic.twitter.com/ODRkvF62SN

I kinda feel disappointed. Travis fought his way throw the pit only to get shot.

Amazing! This season will be the best so far. Can't wait for the next episode oh and Travis RIP #FearTWD

Can't believe you did that to my main man travis tho. WTF #FearTWD pic.twitter.com/xopofA0Gvb

I'm gonna be hella salty for the rest of the season now that Travis got killed off. #FearTWD pic.twitter.com/YTPaB51SjI

@FearTWD until I see Travis as a zombie I won't believe he's dead! And why when I look at cast for every ep season 3 he's still there? ,hmm?

#ItMakesMeSickWhen I have to deal w/ the fact that Travis is dead & I have to wait next week #fearthewalkingdead @FearTWD#TheWalkingDead pic.twitter.com/Y5LTQD3k8O

What did YOU think of Travis’ death? Tell us in the comments!