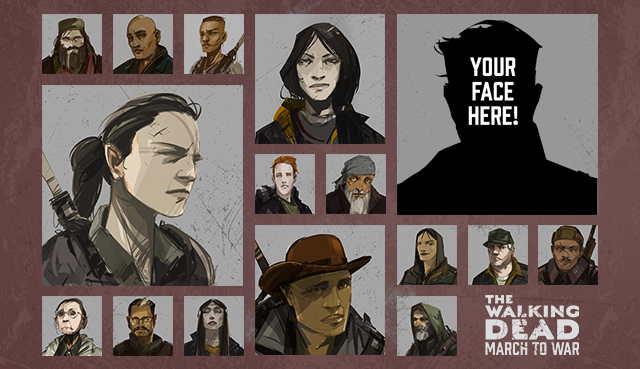 How YOU Could be in the Game March to War!

Do YOU want to be rendered as a character in Disruptor Beam’s MARCH TO WAR?!

Right now you can enter to win a chance to be drawn by Disruptor Beam’s artist as a character in the game. AND two of your friends will be immortalized right along with you. AND you’ll get the high res art file of your awesome mug rendered in MARCH TO WAR style! We’re going to pick 2 winners from the MARCH TO WAR Facebook page and one winner from our Facebook page. You have through March 13th to enter!

Enter on the March to War Facebook Page RIGHT HERE!

Get in the Game:

Enter the “Survive The Walking Dead” Contest
Do you want to be a character in THE WALKING DEAD: MARCH TO WAR?! To enter, visit the March to War Facebook page (https://www.facebook.com/TWDMarchToWar/) and submit your list of three items and two friends that you would bring along to help you survive the world of The Walking Dead. Two winners (and their two friends) will be selected to have their likenesses used as Survivor portraits in THE WALKING DEAD: MARCH TO WAR. For another chance to win, visit The Walking Dead from Skybound on Facebook (https://www.facebook.com/TheOfficialWalkingDead/). See complete rules below for additional details.By submitting an entry in this contest you accept the following terms and conditions:

Restrictions:
● Entries must be received between 10:01 AM EST on March 2, 2017 and 11:59 PM EST on March 13, 2017.
● Entrants must be members of the Survivors List (sign-up for free at marchtowar.com).
● One entry per individual per Facebook page:
○ Entrants may post an entry on The Walking Dead from Skybound (https://www.facebook.com/TheOfficialWalkingDead/) page, THE WALKING DEAD: MARCH TO WAR (https://www.facebook.com/TWDMarchToWar/) page, or both.
○ Being included in another entrant’s post does not preclude an individual from entering separately on both The Walking Dead from Skybound and THE WALKING DEAD: MARCH TO WAR pages.
● Entrants must be 18 years of age or older.
● Entrants must be US residents.
● Entrant and their two friends must be willing and able to send a photo of themselves to Disruptor Beam.
● Entrant must be willing to share their email address and/or phone number with Disruptor Beam.
● Entrant and their friends must be willing and able to grant Disruptor Beam and Skybound the right to use their likeness in THE WALKING DEAD: MARCH TO WAR and in any promotions related to that game and/or Disruptor Beam.
● Inappropriate conduct (lewd, indecent, or insulting posts) will be grounds for disqualification. Disruptor Beam and Skybound reserve the right to disqualify entrants at any time for any reason.
● Employees of Disruptor Beam, or Skybound, or members of their immediate families, are not eligible to win.

Prize:
● Winners will have their likeness and that of their two friends used as Survivor portraits in THE WALKING DEAD: MARCH TO WAR.
● There will be 3 total winners. 2 winners will be selected from Disruptor Beam’s The Walking Dead: March to War Facebook page https://www.facebook.com/TWDMarchToWar/. 1 winner will be selected from The Walking Dead from Skybound’s Facebook page https://www.facebook.com/TheOfficialWalkingDead/
● Winners and their friends will receive high-resolution digital copies of their image(s) as they appear in THE WALKING DEAD: MARCH TO WAR.
● Prize has an estimated cash value of $99.

Timing:
● Entries must be received during the contest – between 10:01 AM EST on March 2nd, 2017 and 11:59 PM EST on March 13th, 2017.
● Winners will be chosen and contacted between March 15 and March 28, 2017 via Facebook post and/or Private Message. If a winner does not respond within 48 hours, Disruptor Beam reserves the right to offer the prize to another entrant instead.

Other:
● No personally identifiable information (PII) except for an artist’s representation of the winner’s face (and that of their friends) for any winners will be revealed in game.
● The odds of winning are based on the number of eligible entrants.
● Evidence of cheating, or failure to adhere to these rules and guidelines will be grounds for disqualification of the entrant at Disruptor Beam’s discretion.
● This contest is being held by Disruptor Beam in accordance with Facebook’s terms and conditions. Facebook bears no responsibility for this contest and does not sponsor, administer, or endorse this contest in any way shape or form.
● By entering you agree to release Facebook and hold it harmless from any liability or damage that may occur directly or indirectly, whether caused by negligence or not, from: (i) such entrant’s participation in the Campaign and/or his/her acceptance,possession, use, or misuse of any prize or any portion thereof; (ii) technical failures of any kind, including but not limited to the malfunction of any computer, cable, network, hardware, or software, or other mechanical equipment; (iii) the unavailability or inaccessibility of any transmissions, telephone, or Internet service;
(iv) unauthorized human intervention in any part of the entry process or this promotion; (v) electronic or human error in the administration of this promotion or the processing of entries.

Home | The Walking Dead | How YOU Could be in the Game March to War!