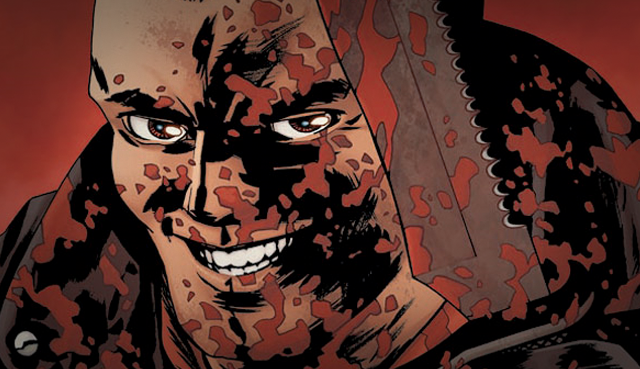 Who Will Be the Villain of Season 5B?

There have been some trailers here and there for the return of The Walking Dead, but no sign of who the new antagonist might be for the second half of Season 5. Looking at the comics, the history of the show, and what fans have said, we ranked who we think might be the next villain, from least likely to most likely.

SPOILER WARNING if you haven’t read The Walking Dead comics past Issue 50!

It seems like we’ve seen the last of Grady Memorial Hospital… but can we be sure? With their fleet of cross-bearing vans and cars, they’ll always be within reach, unless the group puts some serious distance between themselves and Atlanta. And, if the show follows the comics, they might. Unlikely but possible, and that’s why we ranked it at the bottom of the pile.

This season has all been about the grimiest parts of Rick Grimes, and what better way to see the culmination of his than to have him turn into the antagonist? While he may not turn full villain, there have been hints that other characters may have to steer the group away from Rick’s grasp. Remember when Glenn has to step in and stop Rick from a murder spree at the end of Episode 501? Yeah, that. More of that.

When Abraham is first introduced in the comics, he clashes with Rick’s leadership at almost every turn, and in the show, Abraham seems like he may go a similar direction. Torn apart by Eugene’s betrayal, Abraham could turn villainous and try to hijack the group, or take a turn toward the violent. Rosita even already hinted that if Abraham continues down this path, then she’s ditching him for Rick’s group of survivors. Seems rife for a power struggle!

The last three villains were all original to the television show: Officer Dawn (and Officer Jerk Face) at Grady, Gareth from Terminus, and Joe from the Marauders. Even though similar groups exist in the comics, the show has entirely new villains leading them. For example, with the Hunters/Terminus, there was Chris in the comics, who was replaced by Gareth in the show. Similarly, the next villain the group encounters may be someone entirely new.

Although Robert Kirkman has hinted that it might be too early for Negan, we can still hope this is misdirection and that the terrifying and hilarious leader of the Saviors will terrorize our heroes this season. Plus, with the Governor long gone, fans are thirsty for a new villain, and Negan is certainly a big bad.

Anything with “safe zone” in the title is guaranteed not to be safe for long. In the comics, the group arrives here shortly after making it to DC, and finds that Alexandria has a whole host of antagonistic characters…

So, who do you think is the most likely villain? Vote below and let us know!

And if you voted other… comment below and tell us who YOU think will be antagonizing the group for the rest of the season.

Home | The Walking Dead | Who Will Be the Villain of Season 5B?

Out This Week: Invincible #116