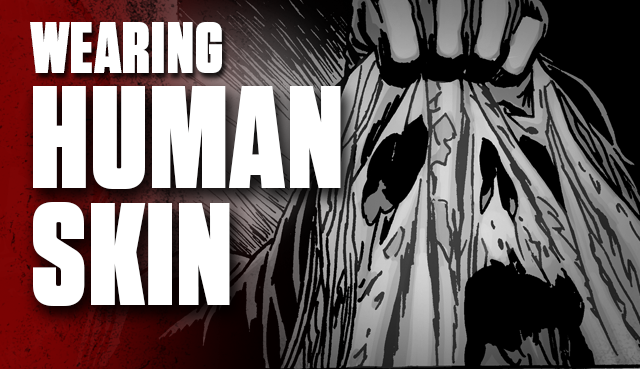 Just when it looked like The Walking Dead couldn’t get more disturbing, the latest arc of the comics introduced a group of humans dubbed the Whisperers, who live amongst walkers by wearing suits made of rotting skin. This grisly development got us to thinking… what is the historical basis for this idea? Have people flayed the skin off of corpses in the past and worn them? We were morbidly curious, so we did a little research on when humans have worn human skin in the past.

One of the earliest accounts of wearing human skin, in 440 BCE the Greek historian Herodotus wrote about the ancient Scythians and their tendency to scalp their victims. The Scythians would sew together their human scalps to make cloaks. This was the ultimate form of boasting and wasn’t for practicality so much as it was so show off how many people they had killed.

Added bonus: they would also use human skin as saddle-cloaks for their horses.

A Mayan god of fertility and renewal (also named Our Lord The Flayed One… see where this is going?) was often portrayed wearing flayed human skin. Where it gets creepy is that his priests would emulate this by killing sacrificial victims and then dressing in their skins. The skins were often dyed yellow and referred to as teocuitlaquemitl (“golden clothes”).

Though we may not know exactly what the priests looked like in their flayed costumes, statues of Xipe Totec bear features similar to the Whisperers, like elaborate string ties running along the back of the worn skin. Other eerie aspects of Xipe Totec’s outfit include “double lips” and flayed hands hanging limply from wrists.

You heard me! Originating in Iceland in the 17th century, an Iclandic legend promised endless wealth if you were able to complete this simple task: flay a corpse from the waist down and wear the skin. The main caveat, though, is that these nábrók (“necropants”) need to include everything from the waist down. Everything.

Although officially there are no nábrók remaining in existence, there is a terrifying replica on display at Strandagaldur, The Museum of Icelandic Sorcery & Witchcraft.

The inspiration for several fictional murderers, including Buffalo Bill and Norman Bates, Ed Gein was a grave-robber and murderer who recycled parts from his victims. In 1954, when his macabre collection was discovered, one of the items in his collection was a suit made entirely of human skin.

Although not necessarily the same as wearing skin over skin, there are several historical instances of humans wearing human leather. There’s even a website where you can purchase human leather goods today, although they are closed to new clients due to high demand.

And clothing isn’t the only thing that we humans can be made into. Ed Gein had a huge collections of objects made from human skin, including an armchair, a belt, a wastebasket, and several lampshades. In addition, our good friend Herodotus had a story about King Cambyses II, who is said to have upholstered a judicial seat with the skin of a (formerly) corrupt judge to serve as a reminder to his successor not to repeat his sins.

Although never proven, there were a few other historical instances of supposed skin-wearing. During the French Revolution, the aristocrats supposedly flayed the bodies of rebels (guillotines produce a lot of waste) and used their skin for clothing. There are also legends of Afghan warlords who made leather clothing out of fallen enemies. While some of this may be propaganda or myth, it’s still provides an interesting example of how wearing human skin has been perceived throughout history, whether it be used to smear reputations or intimidate foes!

What did you think was the craziest example listed above? Are there any other instances you’ve read about or studied that we may have glossed over or forgotten? Comment below and let us know!