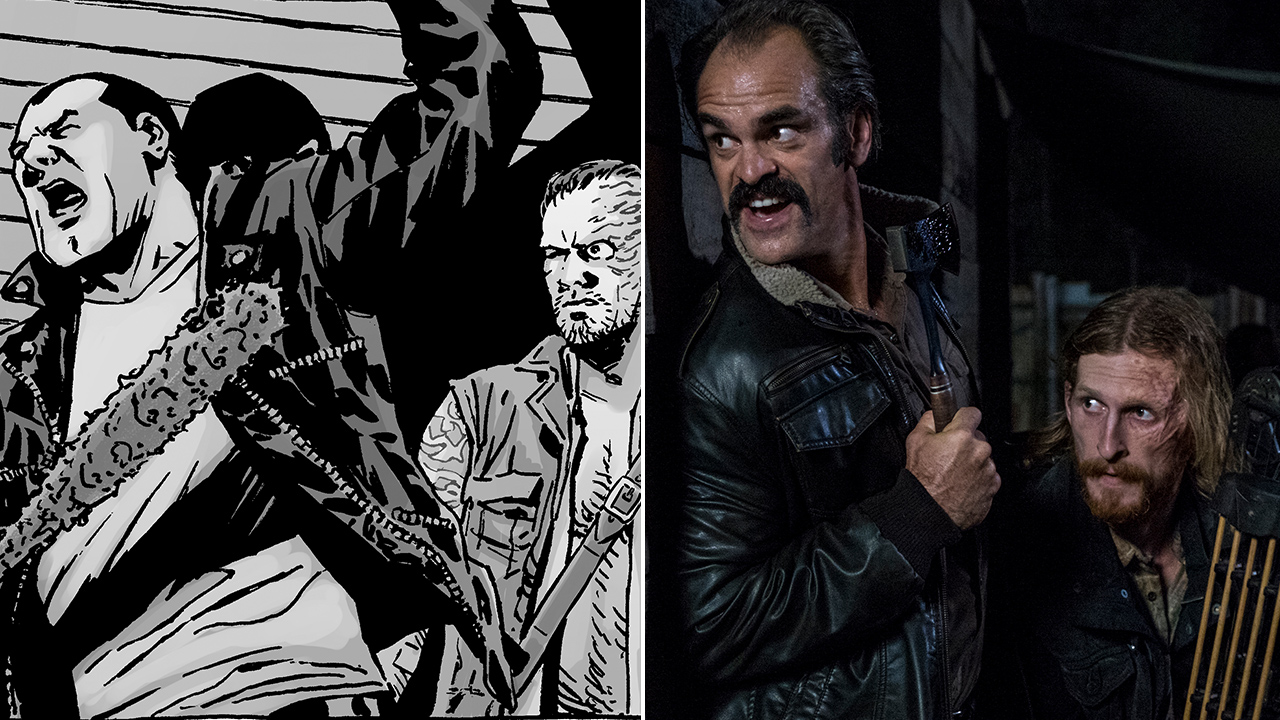 The Walking Dead Season 8 Episode 13 was PACKED with comic comparisons. Let’s jump into how the insane Savior attack on the Hilltop compared to the comics.

The Calm Before The Storm 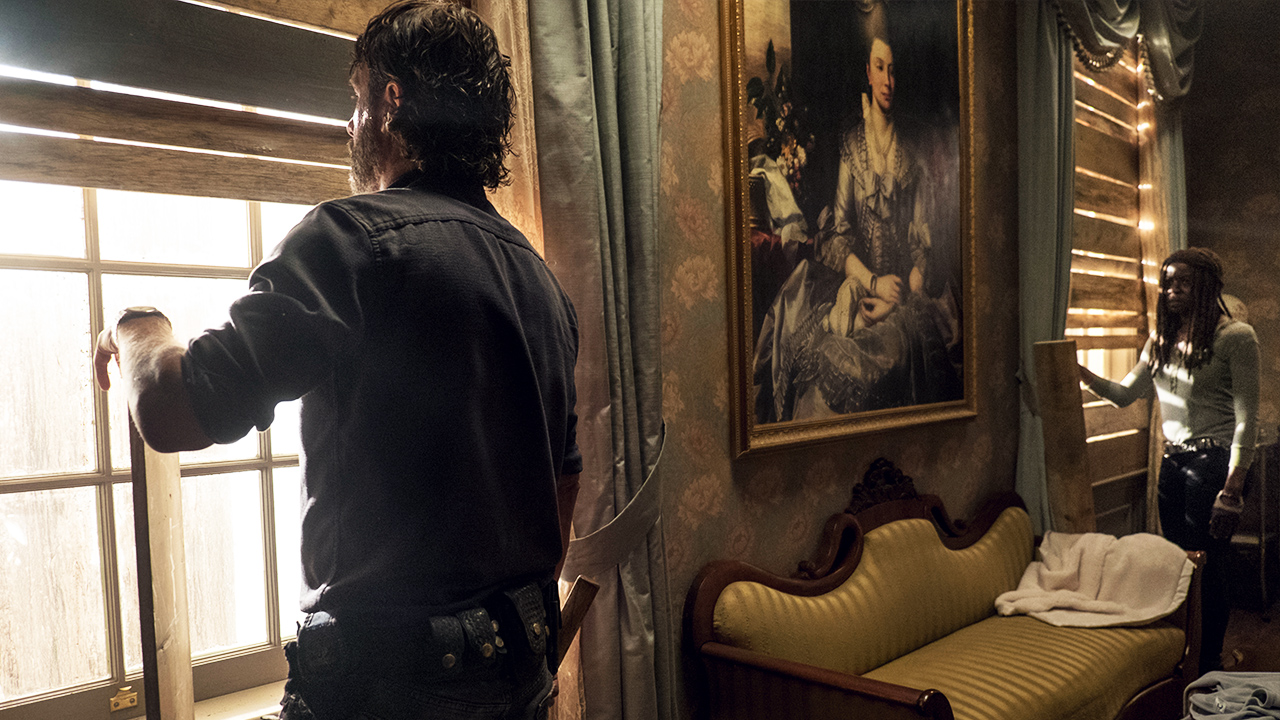 The events leading up to the Hilltop Battle were very different in the comics than the show.

COMICS: The biggest difference here is that Negan, not Simon and Dwight (Simon doesn’t even exist in the comics) lead the charge near Hilltop, where he decides to wait until sundown to attack. Like the show though, Dwight is playing both sides (more on that later).

SHOW: Morgan hallucinates Gavin, the Savior that Henry killed back at The Kingdom. He snaps out of it when horns ring out around him warning of the Saviors’ arrival at the Hilltop. Siddiq pleads with the town doctor to let him assist her with the inevitable casualties and she agrees. With Negan missing, Simon and Dwight lead the charge to The Hilltop with their walker gut-covered weapons in tow. 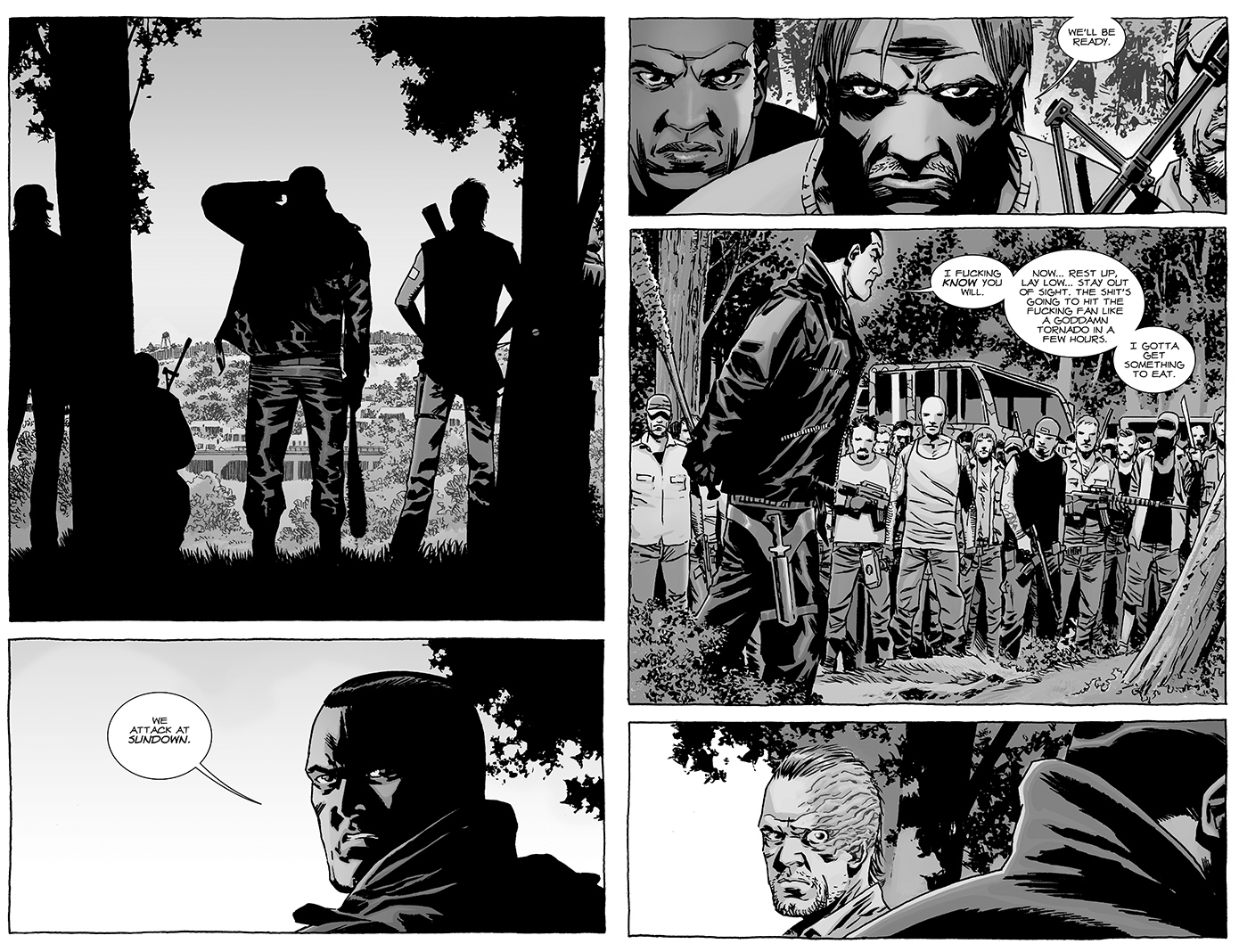 Since Morgan’s dead in the comics and Siddiq doesn’t show up for another few years their storylines are unique to the show. There also aren’t horn warnings, but the Saviors do arrive at The Hilltop at dusk.

The Battle of The Hilltop 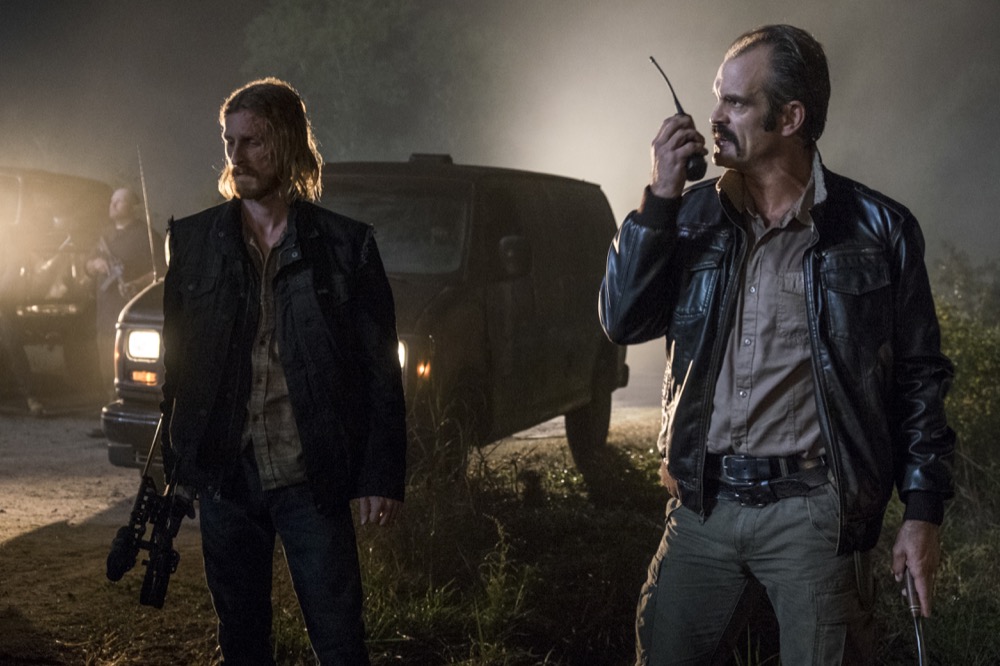 The Saviors’ attack on The Hilltop mirrored the comics very closely with the exception of a few differences.

COMICS: Standing at the gates of The Hilltop, Negan yells to Kal to fetch Rick for him. When he declines Negan orders his men to kill him. Despite this, the Hilltop guards maintain they’ve never heard of Rick. Frustrated, Negan has the Saviors bust down the gates with his truck – but it’s a trap and they get ambushed by Rick and the Hilltop soldiers. Both sides open fire on each other but it’s the Saviors who have the advantage of the walker gut-coated weapons. 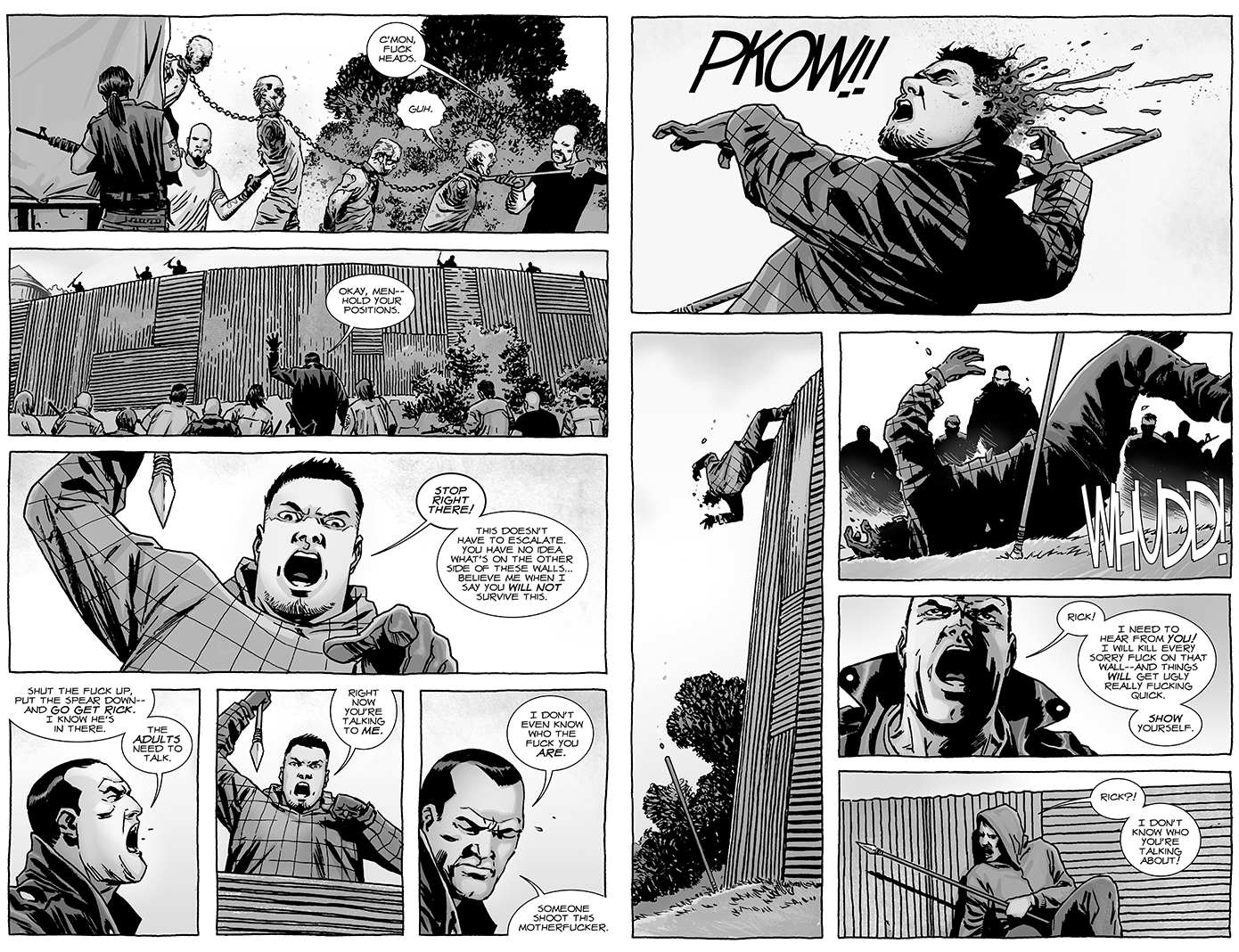 SHOW: With Negan deposed Simon and Dwight lead the Saviors to the gates of The Hilltop. Instead of killing Kal and busting down the gates, they follow Daryl into The Hilltop where, like the comics, they’re ambushed by Maggie and the her allies. The Saviors retreat and unleash a flurry of walker gut-coated arrows. Some of the Saviors rush in with knives and Tobin ends up getting stabbed. He almost dies there until Carol kills his attacker. (In the comics Marcus gets stabbed and Michonne kills his attacker).

Kal’s death, Daryl’s motorcycle distraction, and Maggie’s plan to use her captured Saviors as leverage were all unique to the show. Everything else, however, paralleled the events pretty evenly. 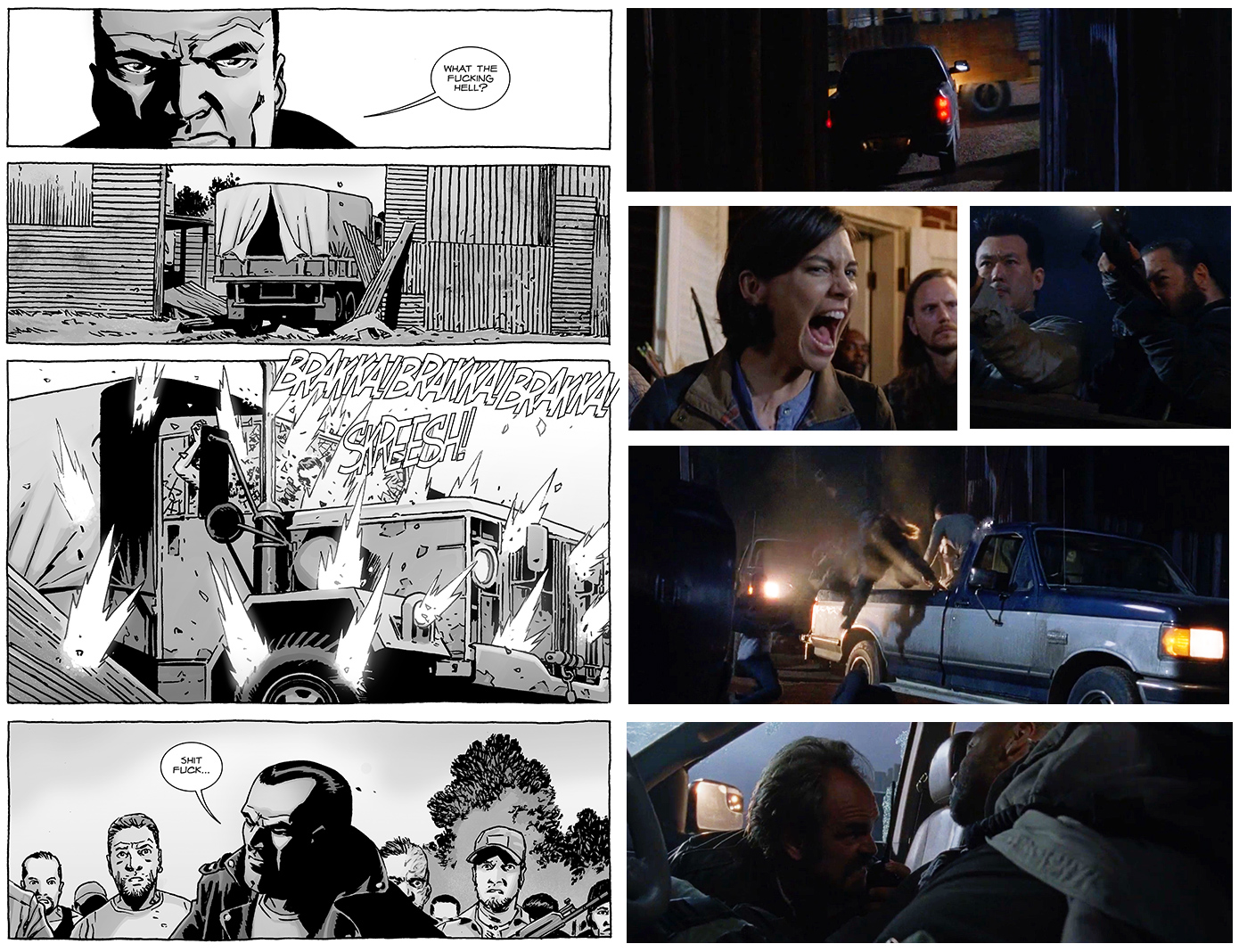 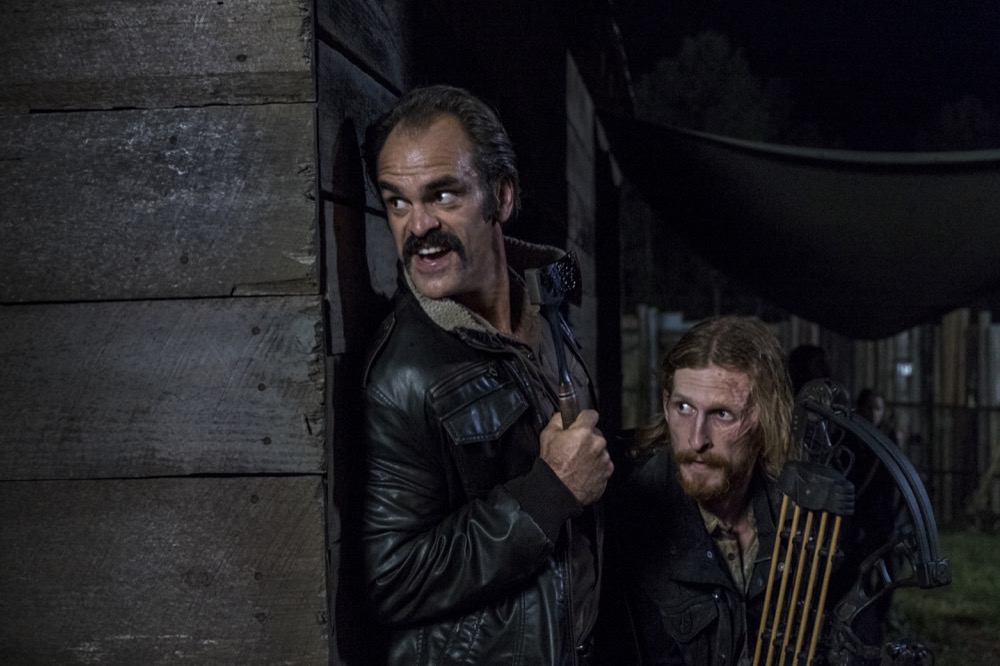 In both the comics and show Dwight makes a controversial move to please both sides he’s working for.

COMICS: Dwight and Negan sneak up behind Rick and his allies. Negan instructs him to shoot Rick in the side with a walker-gut coated weapon so he’ll eventually turn and Negan will win the war. Dwight shoots Rick but he uses an arrow NOT infected with walker guts.

SHOW: A similar situation plays out in the show, but it’s SIMON and Dwight who sneak up behind TARA. Simon tells him to shoot her and he does, but is it to save her like his comic version did with Rick? We’ll have to wait and find out! 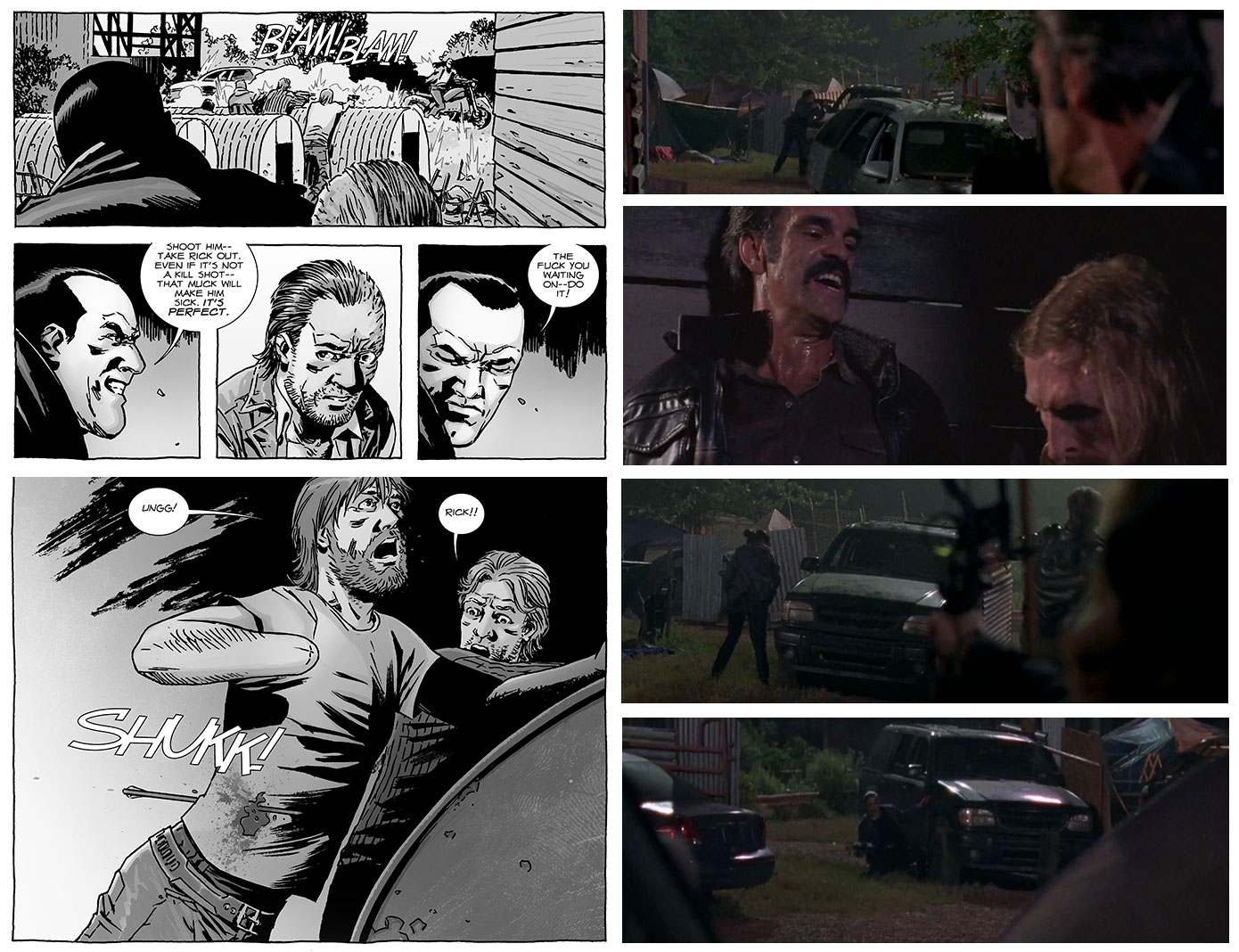 COMICS: The battle rages on as both sides get stabbed, shot with arrows, or bludgeoned by bats. Just when it looks like Negan and his Saviors are placing their foot on their neck The Hilltop blinds them with their vehicles’ headlights and open fire. Many Saviors are slaughtered while Negan, Dwight, and the others are forced to retreat back outside of The Hilltop. It’s there they wait for their walker gut plan to take effect.

SHOW: Like the comics, The Saviors nearly win the battle when The Hilltop soldiers shoot out the lights creating complete darkness. Simon and Dwight cautiously approach the Barrington House until the headlights are switched on and they’re attacked from all sides. Simon and Dwight survive, but are forced to retreat with what remains of their Savior army. 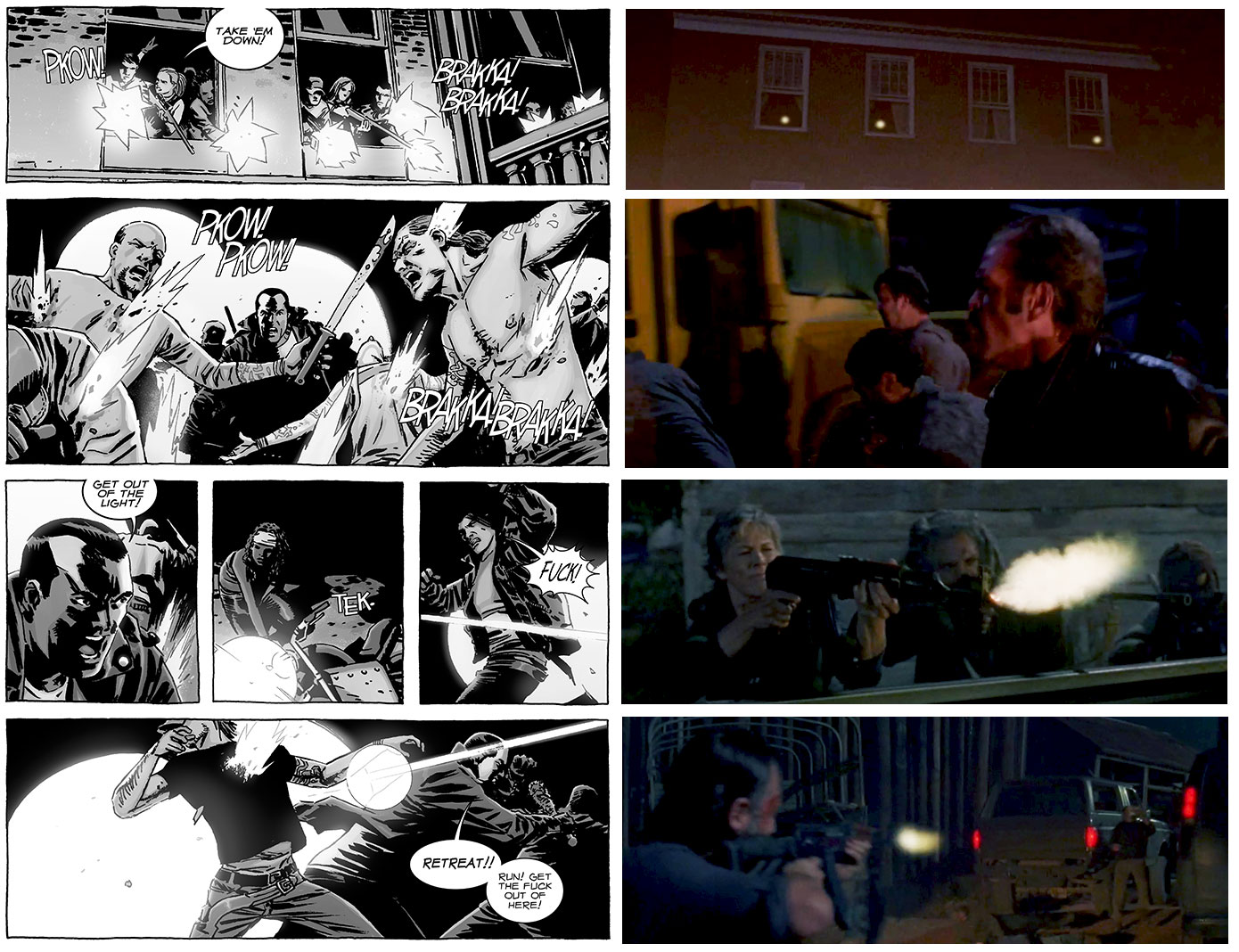 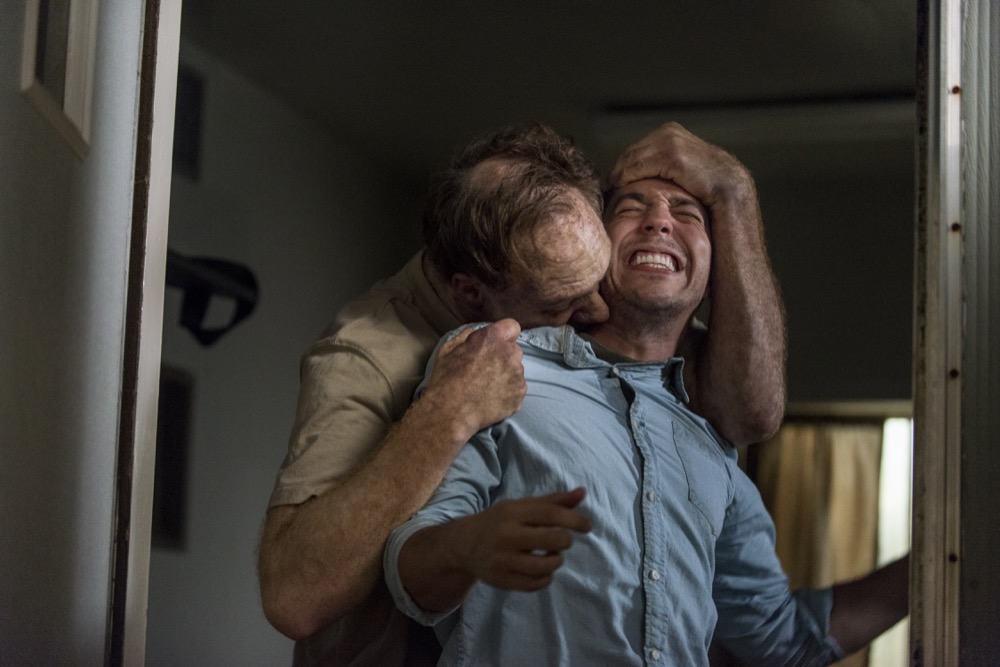 COMICS: With the Saviors gone Jesus, Michonne, and the others take care of the remaining walkers outside. They make a grim discovery that the weapons the Saviors left behind are infected with walker guts. Rick realizes the arrow he was shot with did not infect him and that Dwight is truly on their side…Nicholas is not so lucky. His fever takes control and his wife is forced to put him down. 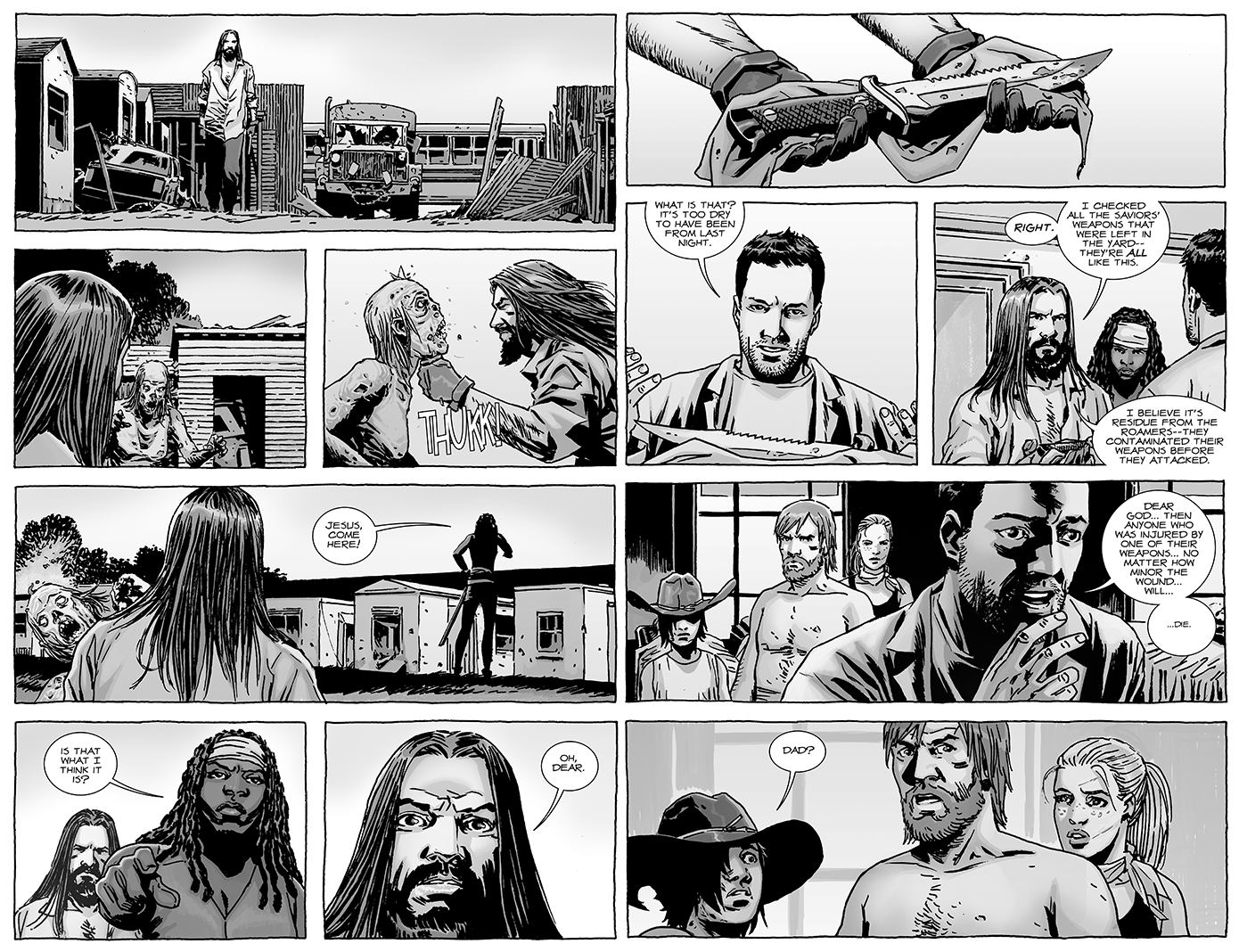 SHOW: In the show, the Hilltop survivors figure out the weapons were infected the hard way: their people start turning. They take over The Barrington house but Daryl and the others fight them off. Since Nicholas is long dead, his comic death is given to Tobin, who has a similar final moment with Carol, who puts him down. 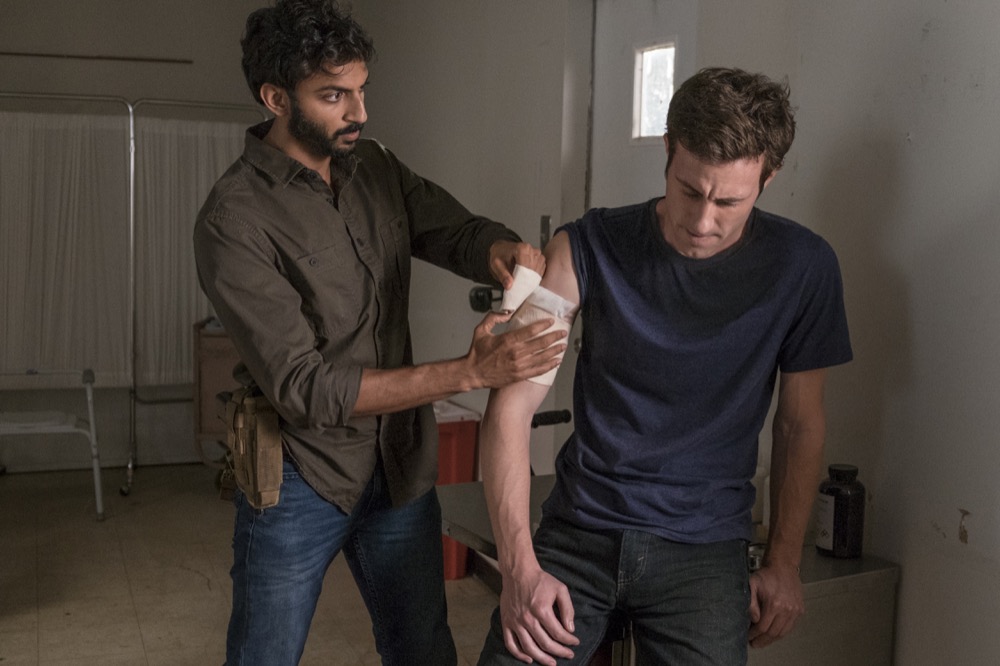 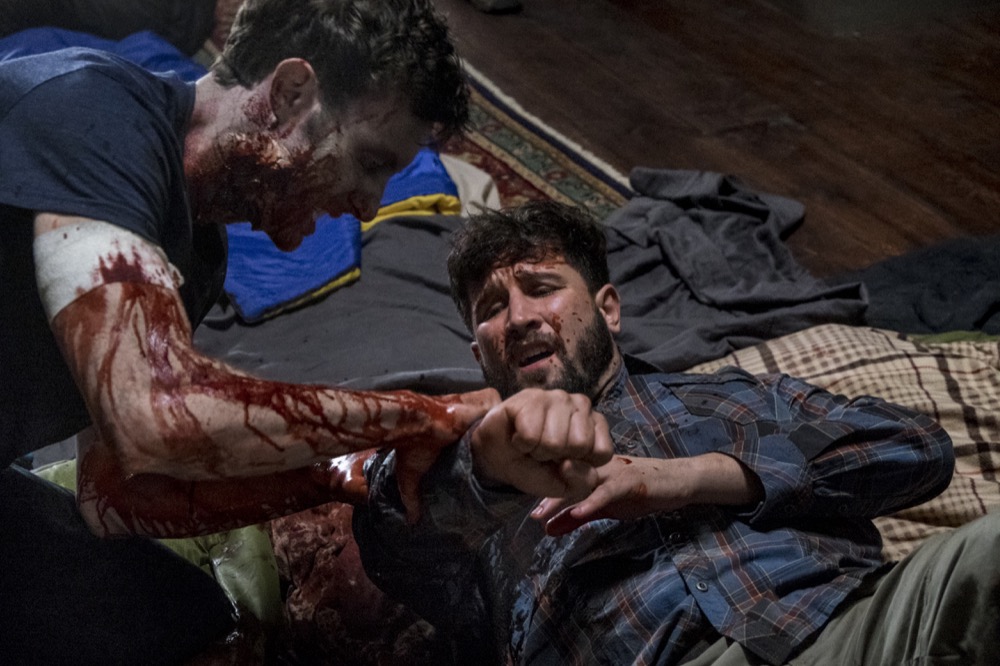 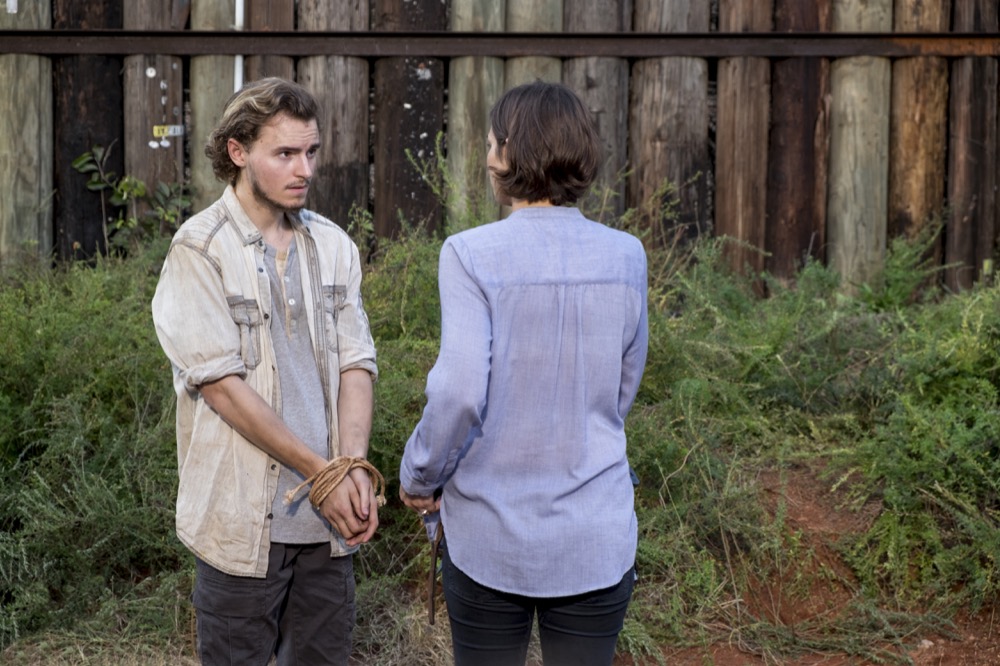 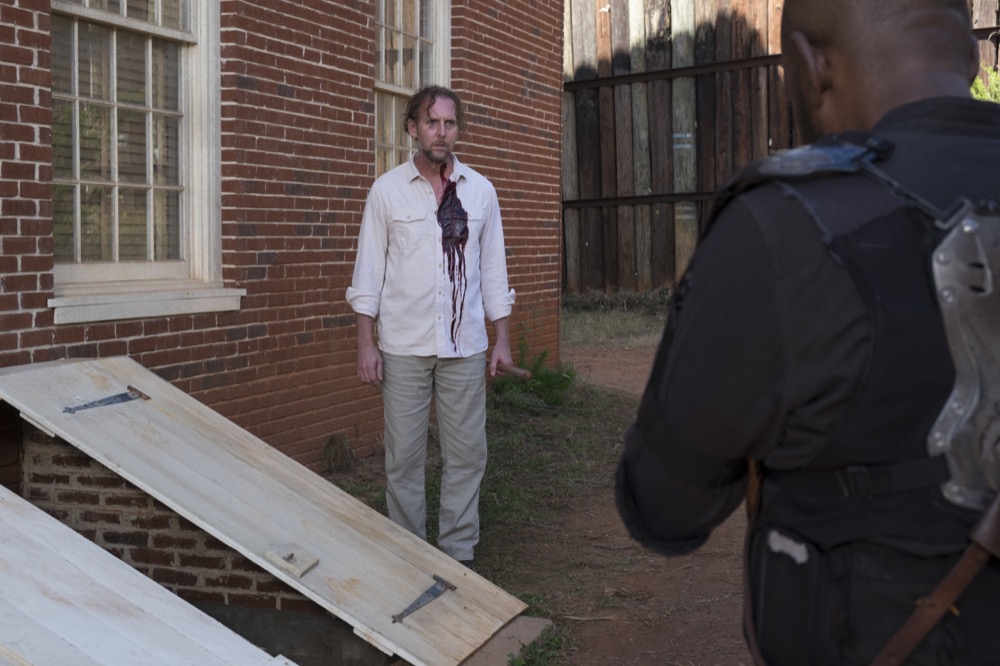 As we mentioned above, any storylines specifically involving Morgan, Henry, Gavin, Simon, Tobin, and Siddiq are different or completely separate from the show. In the comics there were no cage of Saviors, Rick got shot and not Tara, and Negan was in charge instead of Simon. Also, there wasn’t a massive walker attack at The Hilltop following the battle like there was in the show. Otherwise, this episode was pretty in line with the comics.

Which comic/show comparisons were YOUR favorite? Let us know in the comments and stay tuned for next week’s edition of Comic vs. Show!