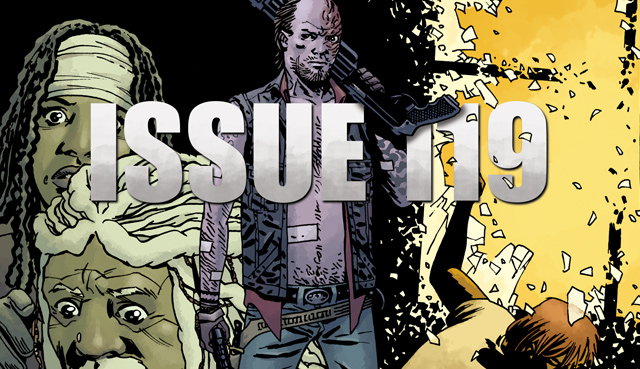 In this issue of The Walking Dead, Rick and his crew regroup after some big wins (Rick’s group) and a huge loss (Ezekiel’s unprepared group). Ezekiel is inconsolable after the loss of Shiva and his men, and right when you think Michonne might say something nice–BAM! She decks him. “If you’re really this much of a pussy, do what you do best… ACT like you aren’t.” That’s one form of therapy, anyway. As Rick starts planning for Negan’s impending counterattack—BOOOOOM—Negan’s already tossing grenades. Negan trots out a hooded and “gagged” Holly and releases her back into the Safe Zone. When Denise pulls the hood off of Holly, we see say she’s not gagged, she’s a walker. As Holly takes a chunk out of Denise’s arm, Negan orders his men to attack and the issue ends RIGHT THERE. Whew!

Ok, admittedly, I KIND of saw that zombie trick coming at the end but HOLY HELL how awesome was that? That Negan, man. You cannot trust that dude.

Is Ezekiel going to bounce back under Michonne’s tough love?

How sad is that little bit with Aaron returning home without Eric? At least it looks like Aaron’s going to kick some ass.

And The Euge, AKA The Mullet with the Bullets, is cranking shells out as fast as he can. I wasn’t so sure about that guy for a while but he’s coming through big time. And I have a feeling bullets are going to be needed coming up…

Below: Give us a comment! The best comment (objectively, not based on votes, Lizzy and I pick, so go ahead and woo us) will get a signed issue of 119!

UPDATE! Comment winner! Well we’ve said it’s not a popularity contest, but with a bunch of upvotes and replies, it’s hard to ignore omnibot, who is now our 2nd favorite scotch-drinking robot after Bender. You have been emailed.

Out This Week: Manifest Destiny #3, Invincible Universe #9 & The Walking Dead #119