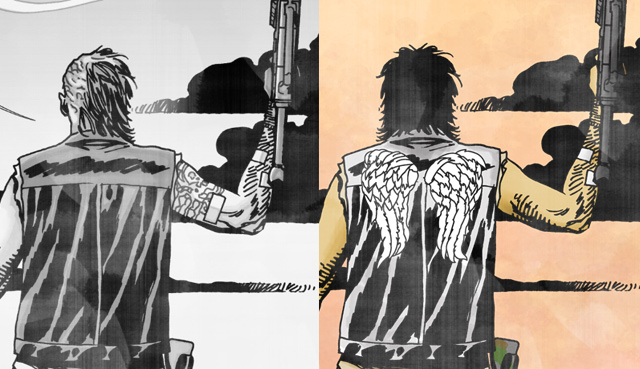 It didn’t take most of you very long to figure it out. The Daryl Dixon cover was an April Fool’s Day prank. We even made a phony back-dated teaser post. I love April Fool’s Day. I think it’s a great way to play with “what if” in a way that let’s you play it totally seriously. And I love Norman Reedus. We all do at Skybound, and we love what he brings to the character of Daryl. This was not a prank designed to “trick” Norman (hope he’s not TOO mad). It was a playful nod at the fact that the very, VERY loved Daryl Dixon isn’t in the comics at all. And because last year we “leaked” the Season 4 episode titles I thought it might be funny to do something around Daryl again this year. This led me to wondering what it would look like IF we brought Daryl into the comics (which I don’t see happening, but IANAR*).

Of course, how does one make a Daryl cover when you don’t want to bother the super-busy Charlie Adlard? I believe commenter Dim was the first to point out that it our cover was awfully close to an image of Dwight from issue 98. I may not be a very good artist, but I’m a damn fine Photoshopper. I took to my copies of Volume 17: SOMETHING TO FEAR to find a good image of Dwight, who just happens to have some visual similarities to Daryl. Here’s a comparison: 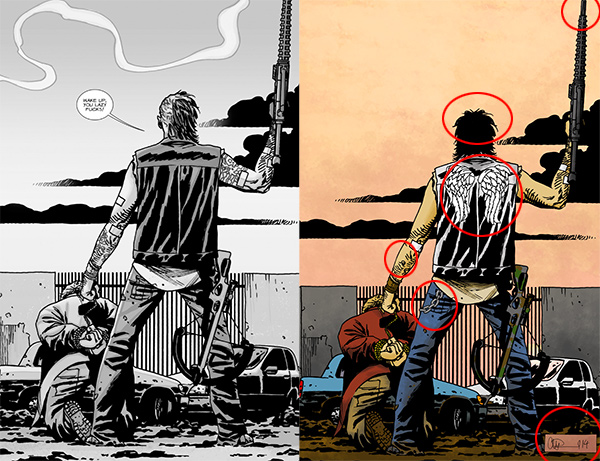 I circled some of the changes I made in red, and apologies to Charlie for messing with his awesome page. I had to drop the image a bit to make room for the title dress, which means I had to add a muzzle to the M4, I had to add hair to the left half of Dwight’s head (copied from the right and mirrored and changed a bit), I removed Dwight’s tats, added Daryl’s iconic wings patch, added a wallet chain, deleted the smoke from the gun (it interfered with the title dress) and then added Charlie’s signature, which he has on every cover. The last bit was the coloring, and I apologize to colorists everywhere for my hack job. This is the second thing I’ve ever colored, and I think it’s not bad for a second try but it looks pretty awful.

I guess since it was hidden on a the back-dated post, no one paid much attention to the OTHER photoshopped image of Dwight. This one was also from issue 98 and was a lot simpler: 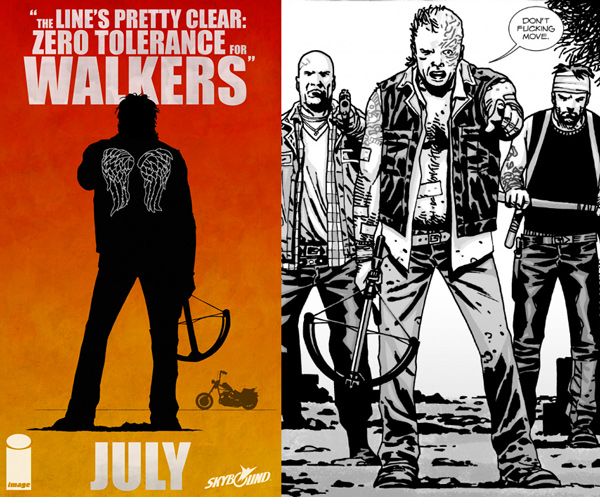 Since it was just a silhouette, it was pretty easy to make it look like Daryl/Dwight was facing away from the viewer. I also flipped the image so that the crossbow would be in his right hand. I was going to have this one be Daryl in his poncho but those wings are just a bit too iconic (if this were an actual teaser I wouldn’t be giving it away THAT easily). The tag line is an actual line from AMC’s The Walking Dead that I thought sounded pretty badass. And the motorcycle is from a render of the McFarlane version of Daryl’s motorcycle that I turned into silhouette. Fun stuff!

Hope you all enjoyed this or got a laugh out of it. Our goal when we do these certainly isn’t to make anyone feel stupid. We just like to play with expectations. Now if you’ll excuse me I have to go write a post about the Dixon Brothers TV show spinoff announcement…