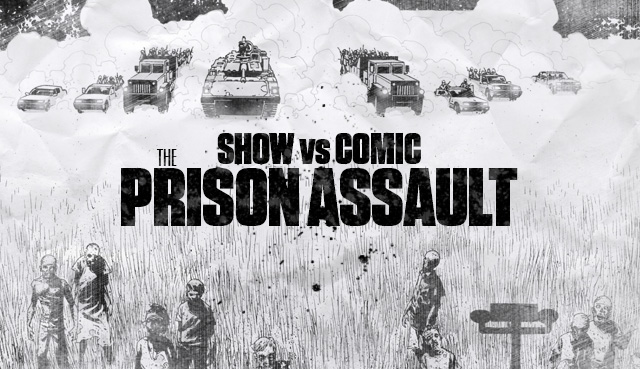 Show vs Comic! The Prison Assault!

Before you go any further, MASSIVE spoilers through episode 408 (the mid-season finale) of the show and for the comic up through Volume 8 (issue 48). You have been warned. 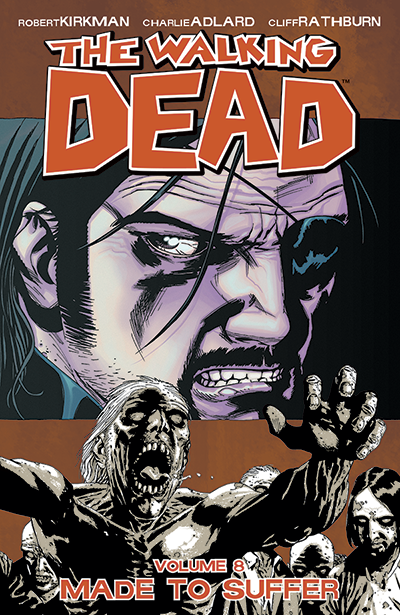 Wow, so I actually wasn’t sure if the Governor story line would wrap up in the first half of the season, but lo and behold, we’ve got ourselves a dead Governor (I’m assuming) and a ruined prison. This puts us pretty squarely up through Volume 8: Made to Suffer, so it’s a pretty good time to compare and contrast the Governor story arcs and specifically the assault on the prison.

First, it’s worth noting that the Governor in the show and the Governor in the comic are fairly different. Not just physically but mentally. The comic Governor is MUCH more far gone than the one we see in the show. He almost immediately cuts Rick’s hand off when he first meets him. There is no disguising what a bastard he is. Yes, it’s hidden from the people of Woodbury somewhat, but even those people seem to be more blood-thirsty, criminal, etc. 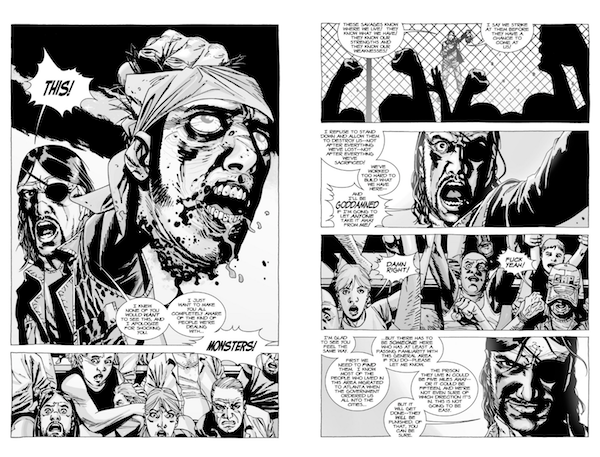 And this ties directly into the Governor’s ability to motivate his people into attacking the prison. On the show I felt this was a bit… tenuous. What real evidence did he give that Rick and his crew were bad people? Just a story about his eye and Woodbury? Had he earned the trust of the campers he was with?

In the comic the Governor is still in Woodbury and for better or worse, these people had been following him for a long time and then one day he shows up with an eye scooped out and an arm cut off (yeah Michonne REALLY goes to work on the Gov in the comic. Like really REALLY goes to work). So it makes a little more sense that they would attack the prison.

Aside from Woodbury lasting the entire story arc, the general structure is close: The Governor attacks the prison, fails, captures someone, and returns again. This happens fairly quickly in the comic. The show, obviously, there is a LOT of time between the two attacks. 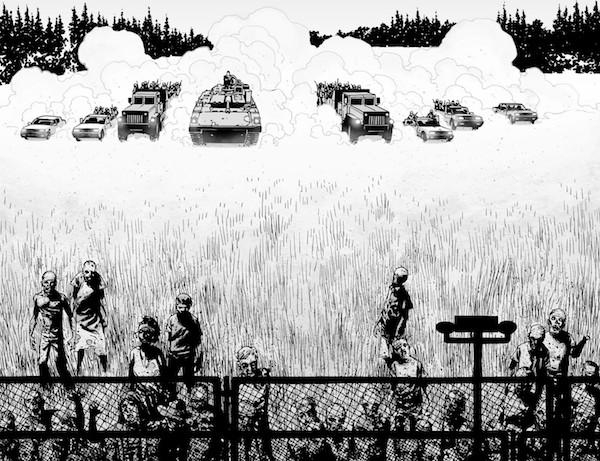 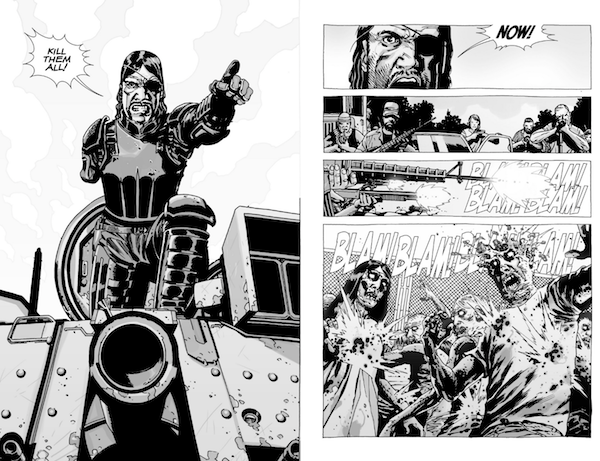 Another big difference is WHO the Governor captures. In the comic it’s just Tyreese (Michonne narrowly escapes, but not before losing her katana, which is presented to the Governor as a trophy). In the show it’s Michonne and Hershel.

In both the show and comic the Governor takes his hostage (comic: Tyreese, show: Hershel) and threatens to behead him if he’s not let in. 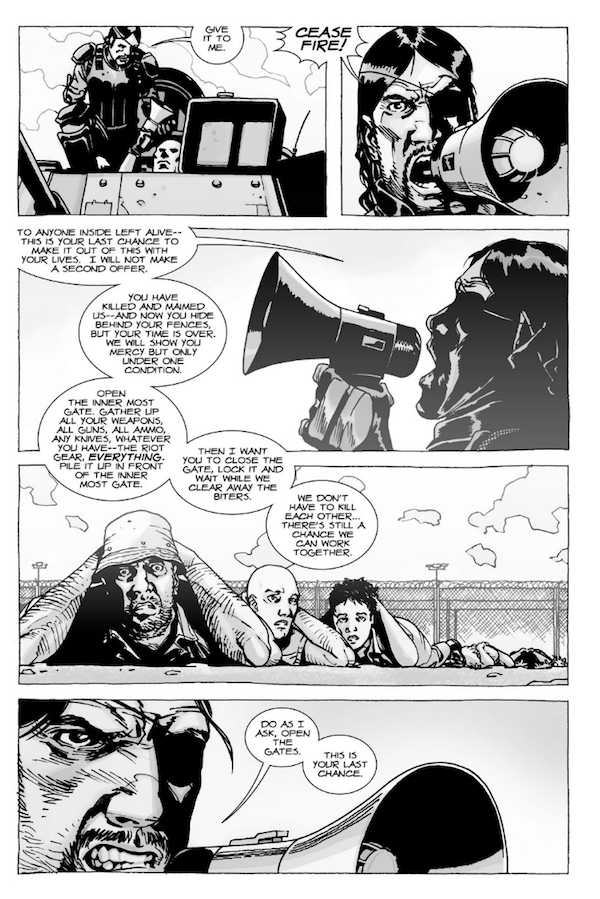 And in both versions, Rick refuses and the hostage is fairly brutally killed with Michonne’s katana. It should be noted that I don’t think either Tyreese or Hershel wanted Rick to give in, and both died heroically. 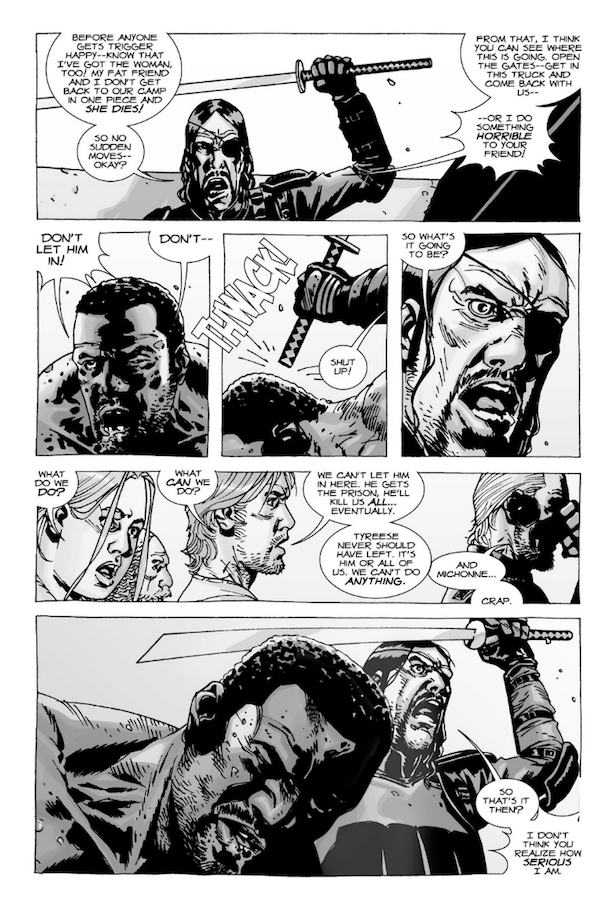 In the comic the Governor retreats, is attacked by Michonne (who again escapes but with her katana this time) and in a rage, returns to the prison, desperate to kill everyone there. Without Andrea and Glenn in the sniper towers, his attack is more effective. He manages to lay waste to the prison, dying in the process (killed by one of his own, numb and disenfranchised after realizing she killed a woman and her baby). 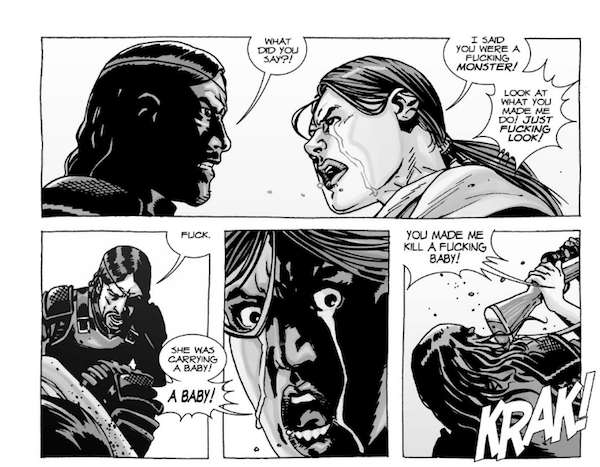 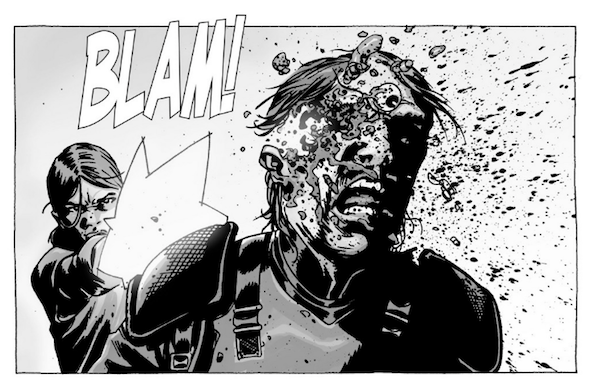 If you’ve never read the comic but have friends who have you probably kept hearing about the prison attack in relation to the show, and there’s a reason. It’s some of the most intense, exciting, sad, and well-written action in the entire series (which is saying a lot). And your friends were probably pretty geeked to see this shot from the comic, basically recreated at the end of the episode: 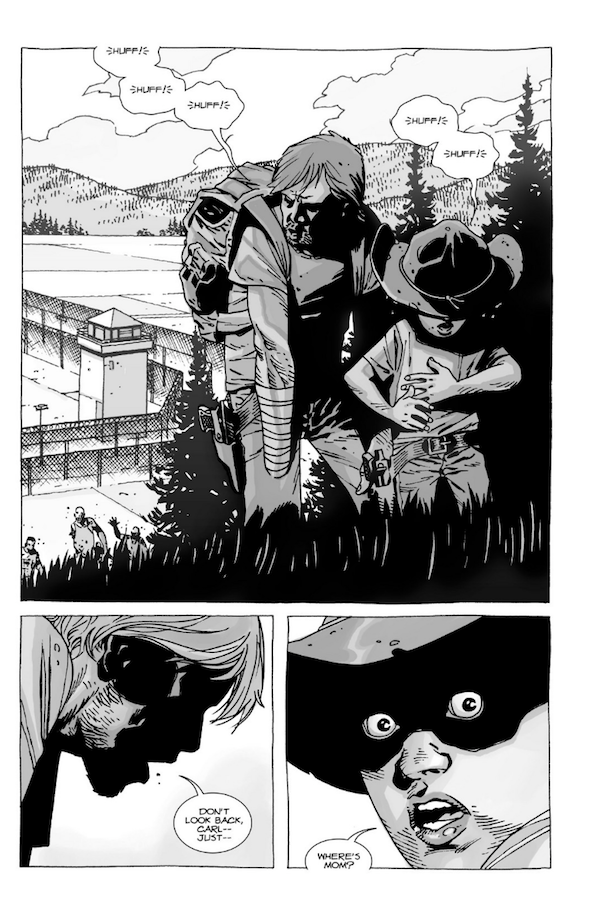 In the comic we lose Tyreese, Hershel Greene, Billy Greene, Axel, Lori, baby Judith, the Governor and a lot more. Glenn and Maggie have gone back to the farm BEFORE the second attack on the prison, Andrea and Michonne’s whereabouts are unknown, and Rick and Carl are separated from everyone.

In the show, in the two attacks we lose Axel, Hershel, Andrea (not directly), Milton (not directly), Judith(?) and again, the Governor. The group is scattered. Aside from the bus driving off we don’t really see anyone’s escape from the prison other than Rick and Carl. I think it’s safe to assume that Glenn, Maggie, Michonne, Daryl, Sasha, Tyreese, Beth, Bob, and more are separated in groups outside what’s left of the prison. And Carol may or may not be out there somewhere as well. Great cliffhanger.

The show and the comic, though once again being very different, share that DNA, and head the same direction but with slightly different routes. And I think that’s what helps keep the show so fresh even for people who’ve read the comic.

Home | The Walking Dead | Show vs Comic! The Prison Assault!