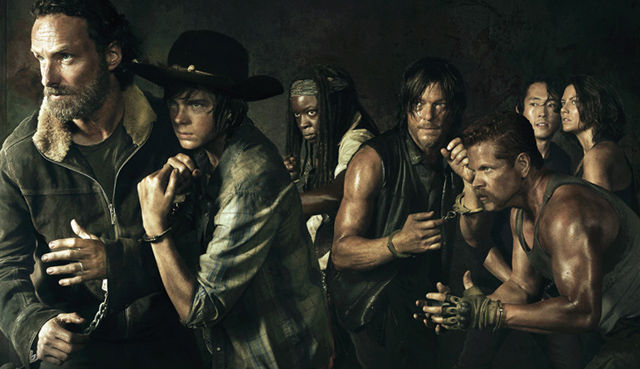 ENTERTAINMENT WEEKLY: Before we get macro, let’s start big picture. I know sometimes you guys look at these as 8-episode chunks or arcs of what you’re going to do. I guess if that’s the case, why don’t you start by telling me the overall story or theme of how you see this next batch of episodes.

ROBERT KIRKMAN: The show is about characters evolving and growing and changing over time, so for our first batch of eight episodes, if you’ve seen the trailer you very much see that these characters are in this new state of mind — the state of mind that they’ve formed after living through this crucible in the last half of season 4. What you have on the surface could appear to be another Governor conflict with Gareth, who’s the guy who is in charge of Terminus and is definitely in conflict with Rick. But the thing that excites me most about this show is that because these characters are growing and evolving and changing, Gareth is coming against a very different Rick Grimes than the Governor did. So the outcome is going to be quite different. The only hint that I’ll really give you is that there’s a lot of ground covered in our first 8 episodes, so I would say without a doubt that Gareth is far from the only threat, quite possibly far from the biggest threat, and there’s quite a bit on the horizon. I would just say more than any other season, we hit the ground running, and there’s quite a bit going on with all of these characters. I think people are going to be pretty happy to be along for the ride.

Let’s talk about the Terminus folks. There seem to be more clues that they could indeed be cannibals with some of the footage we saw in the preview and obviously some of the other clues and parallels to the comic book. What do you want to say about that?

I’ll answer that with two statements: One, wouldn’t it be crazy if they didn’t turn out to be cannibals, since everything seems to be going that way? And two, all I’ll say is this season is following the comic book storyline pretty closely, possibly closer than we ever have before, and there’s a very popular, familiar storyline in the comic books that happened immediately following the exodus of the prison and it is entirely possible that we will be touching in some way on that very popular storyline.

CLICK HERE TO CONTINUE READING way more, including Terminus, Gareth, the mission to get to DC, and more! Good stuff!