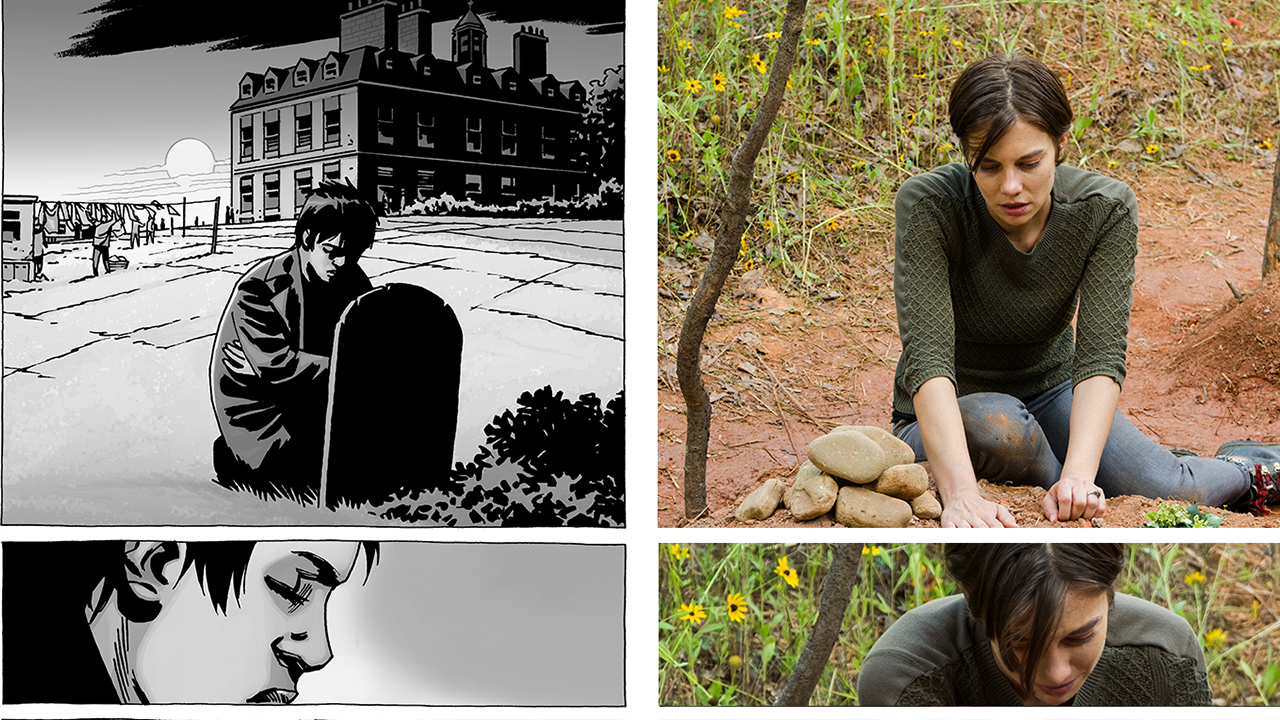 This week’s episode of The Walking Dead took us back to The Hilltop and put Maggie’s resiliency on full display. So how did it compare to the comics? Did The Saviors set up an elaborate trap and did Maggie punch Gregory?? We break down all the major differences between comic and show below:

The beginning of the episode begins very similarly to the comics. However, the news Maggie receives is slightly different.

SHOW: Dr. Carson informs Maggie she’s suffering from a rare condition known as abruptio placentae. It’s caused from trauma but shouldn’t affect the baby. He advises she take it easy and stay at The Hilltop for the remainder of her pregnancy. 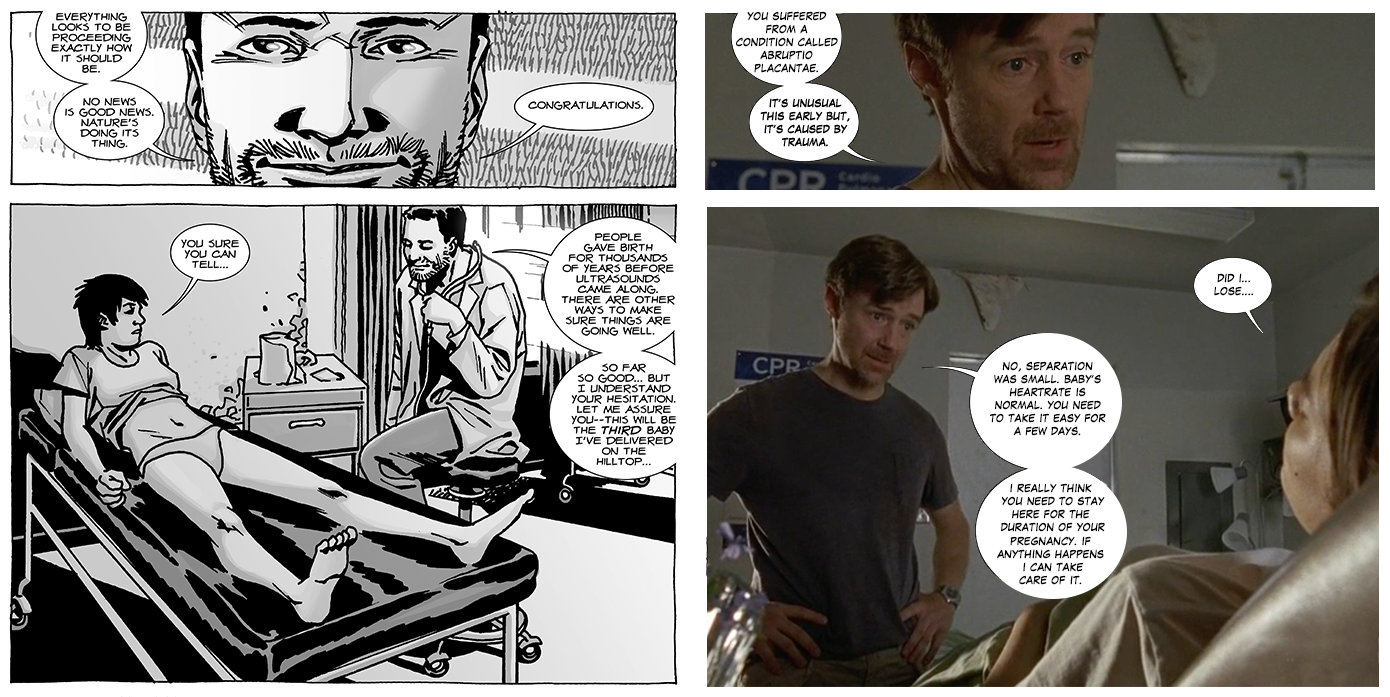 COMICS: Dr. Carson tells Maggie her unborn baby is doing just fine and she has nothing to worry about. Suddenly, Gregory interrupts to introduce himself to Maggie, which he’s done in the past. She corrects him and then chats with her adopted daughter Sophia about adjusting to Hilltop life. 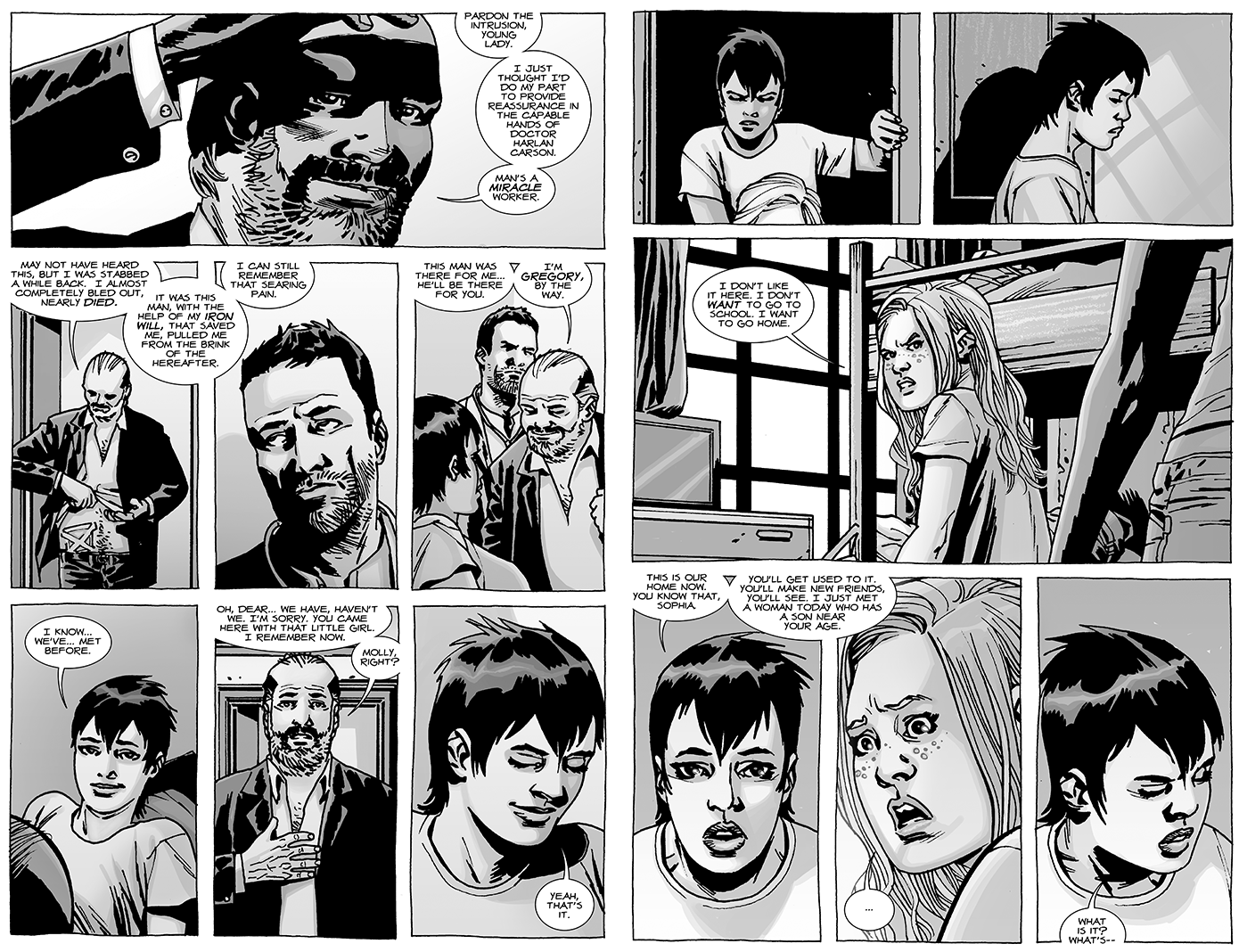 In both the comic and show Maggie visits Glenn’s grave and is comforted by another woman who’s also experienced loss. However, that’s when the show deviates from the source material:

SHOW: Maggie visits Glenn’s grave with Sasha and they comfort each other in their losses. Jesus shows up to place green flowers on his grave to symbolize release. Gregory then arrives to question Maggie about what she told The Saviors about the agreement between his community and Alexandria. She assures him they’re still oblivious but Gregory demands she and Sasha leave immediately. Jesus buys them time and gets Gregory to agree to let them stay the night. 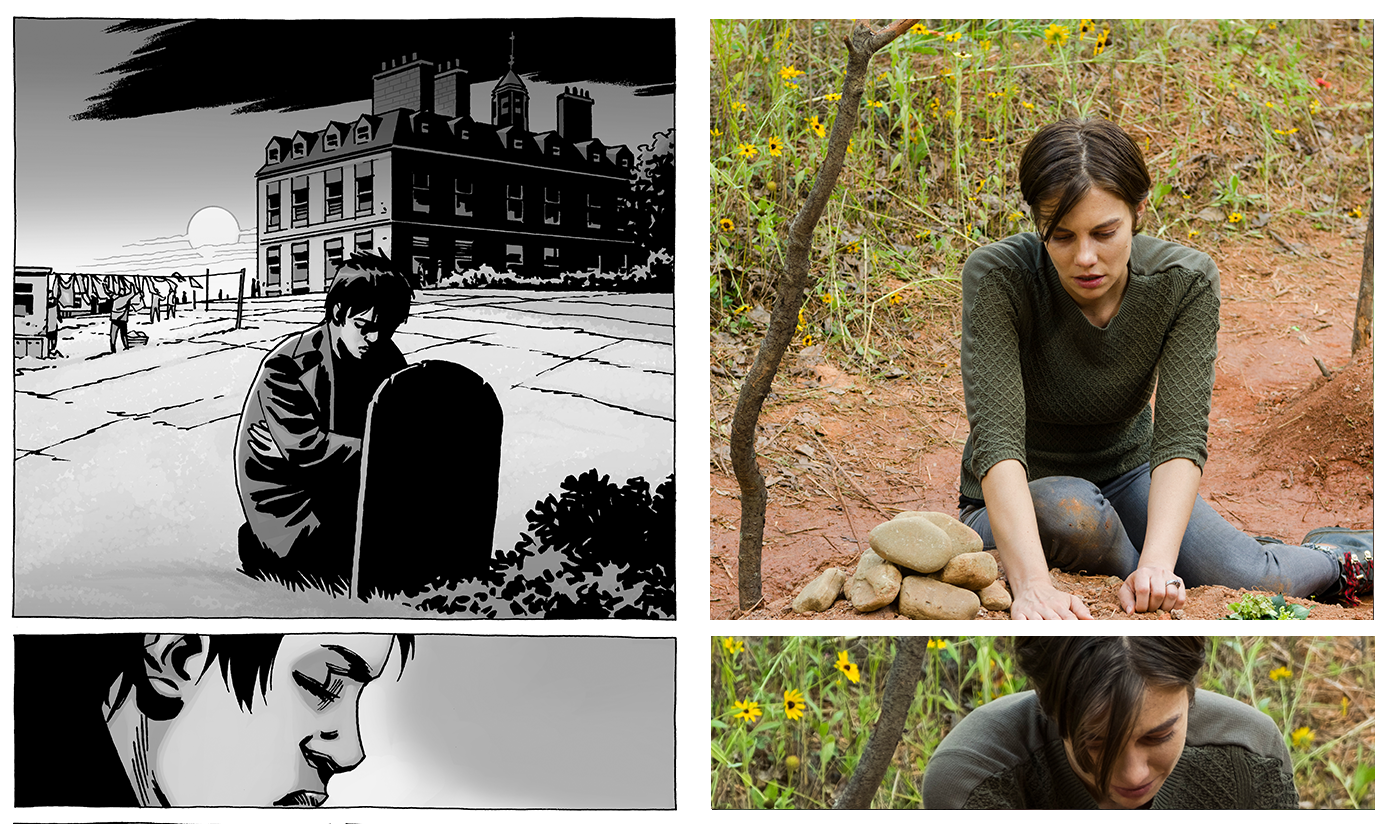 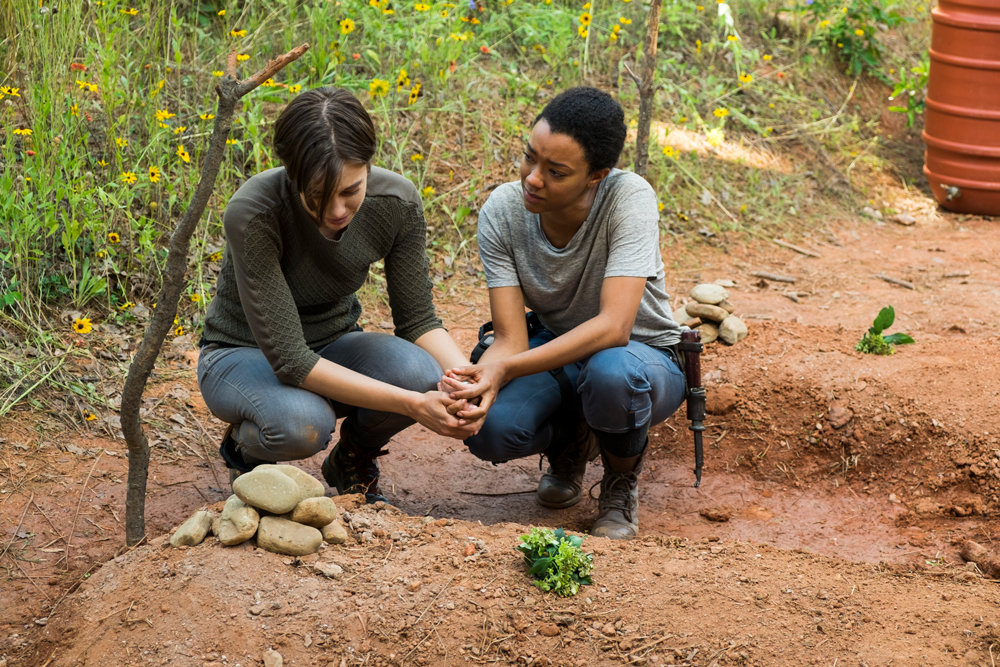 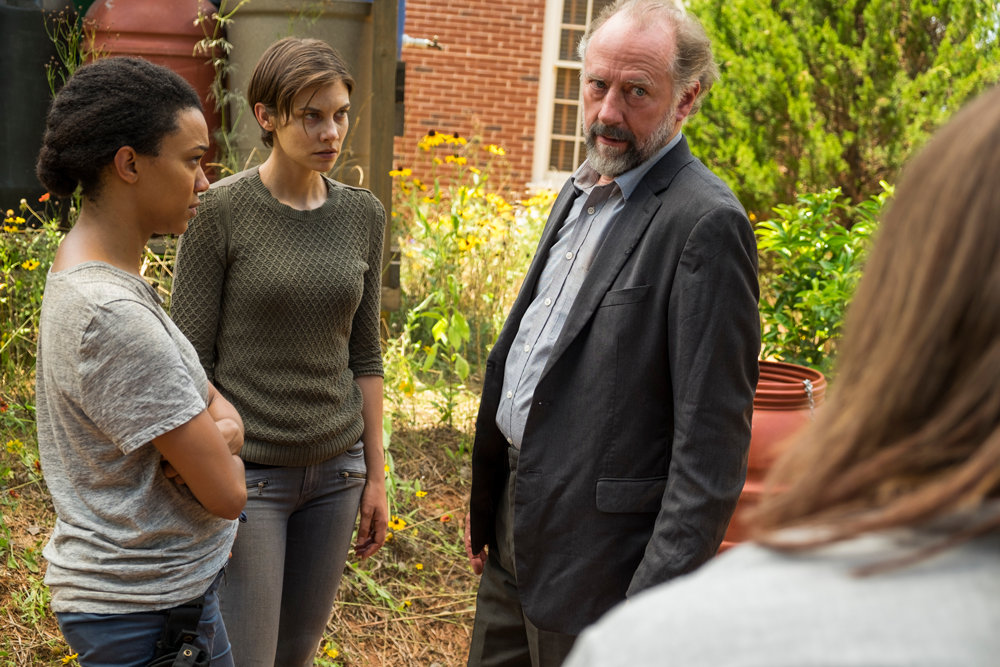 COMICS: Maggie visits Glenn’s grave and is greeted by Hilltop resident Brianna, who’s also experienced loss. She comforts Maggie by discussing how she handled the death of her husband, parents, daughter, and siblings. (Note: Sasha and Briana are two completely different characters). 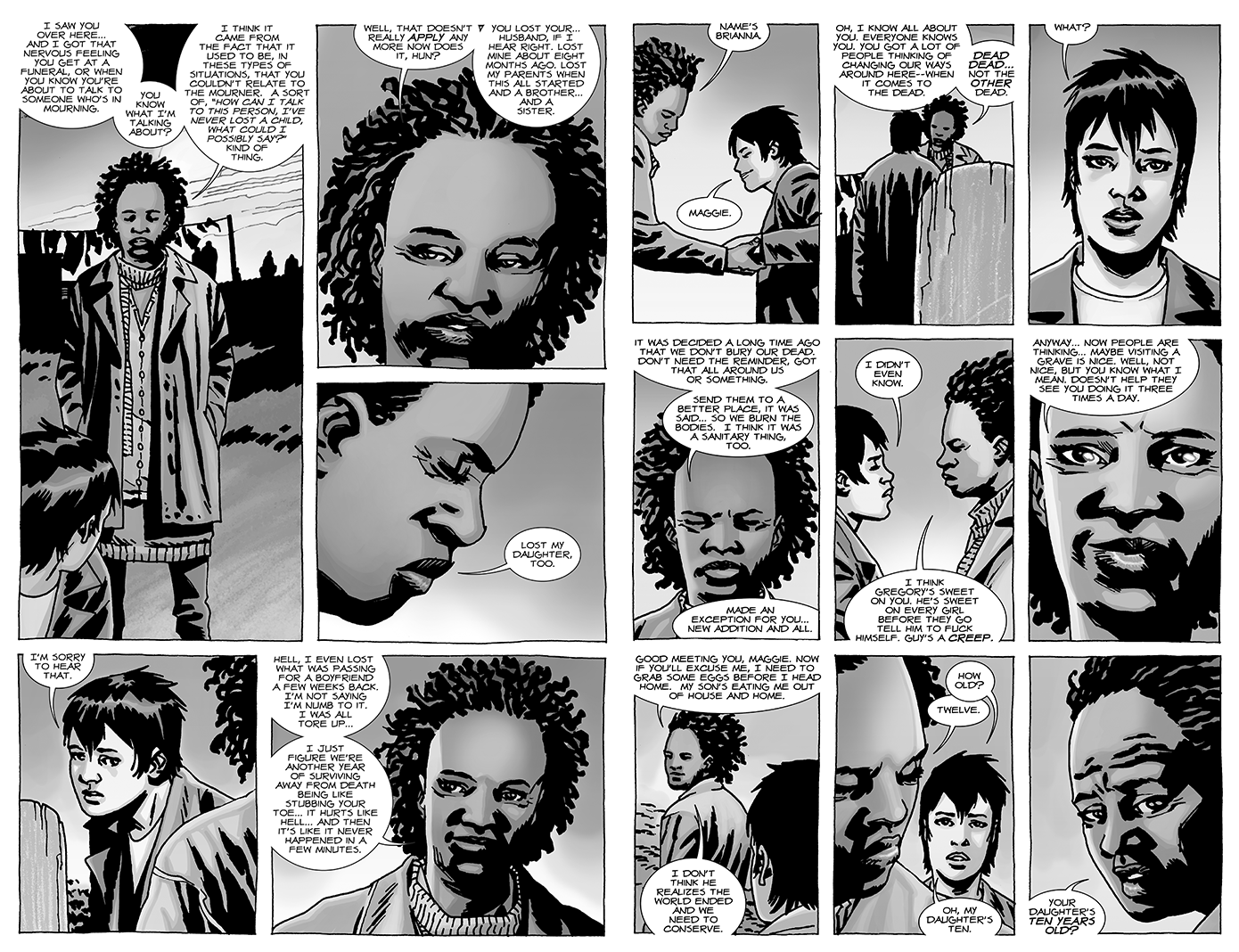 Sorry, the Savior trap that involved blasting orchestral music in a locked car to attract a horde of walkers into The Hilltop all leading to Maggie plowing them with a tractor did NOT happen. It did however make a great case for how terrible The Saviors are with the Hilltopians. Hilltop Colonians? Hilltoppers? Decide in the comments! 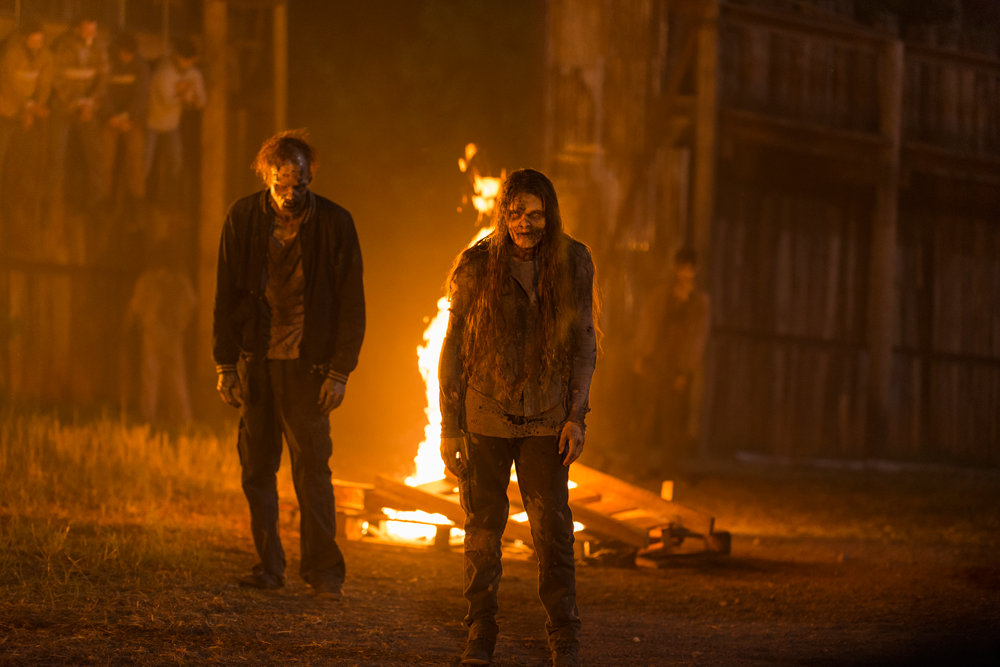 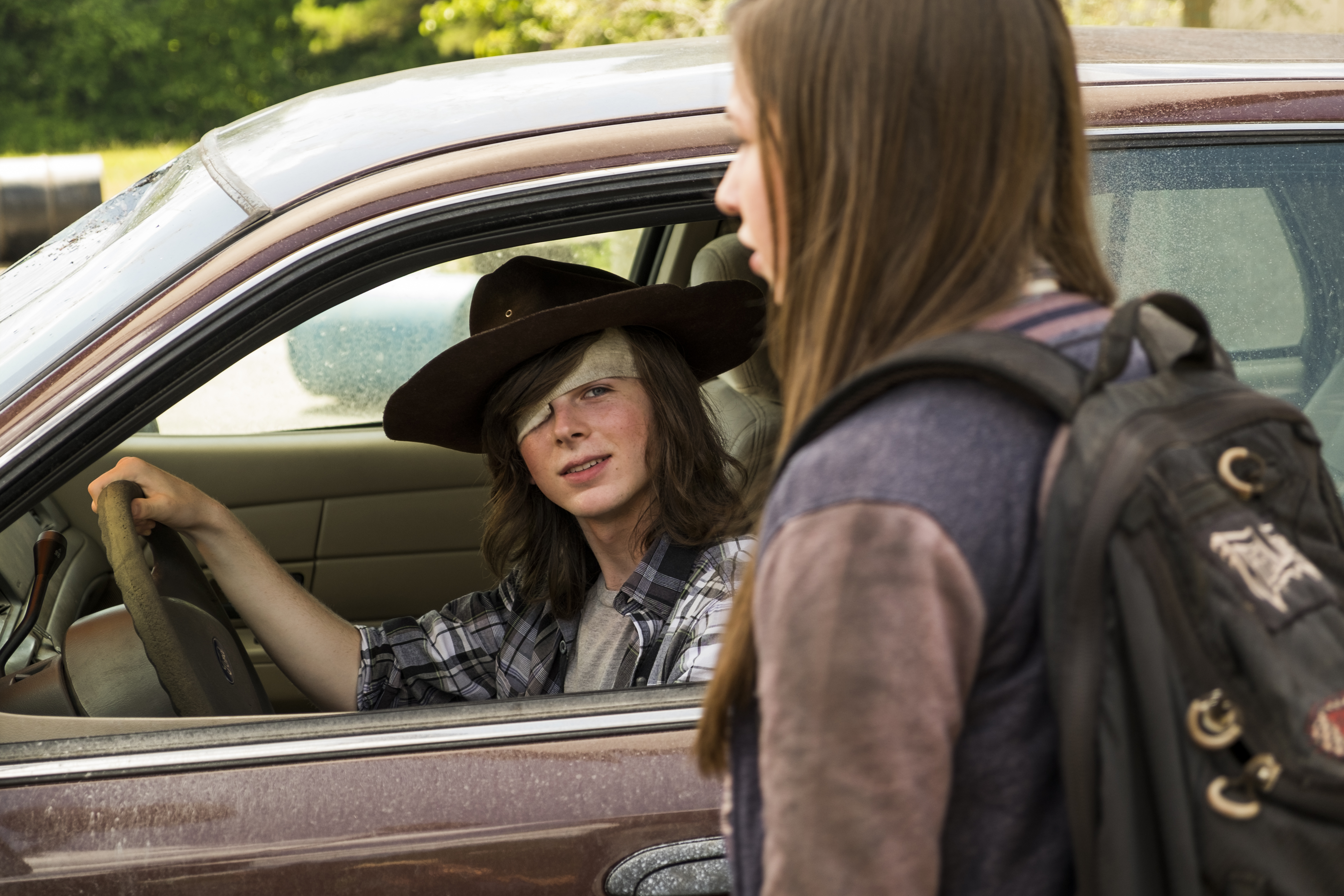 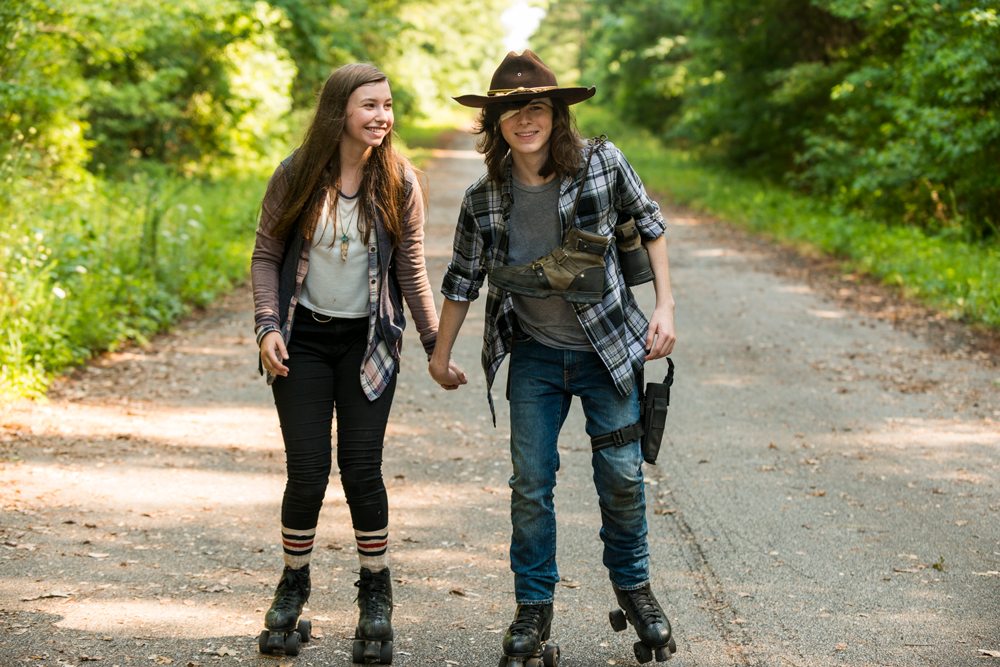 Around this time in the comics there’s a LOT of talk of merging the survivor communities to fight back against Negan. Jesus discusses the plan with Hilltop guard Kal, who immediately runs off to warn the Saviors. Jesus tracks him down just in time for The Saviors to show up. Jesus improvises and informs them they’ll be short on supplies the next time. Kal snaps out of it and they both return to The Hilltop to continue planning. 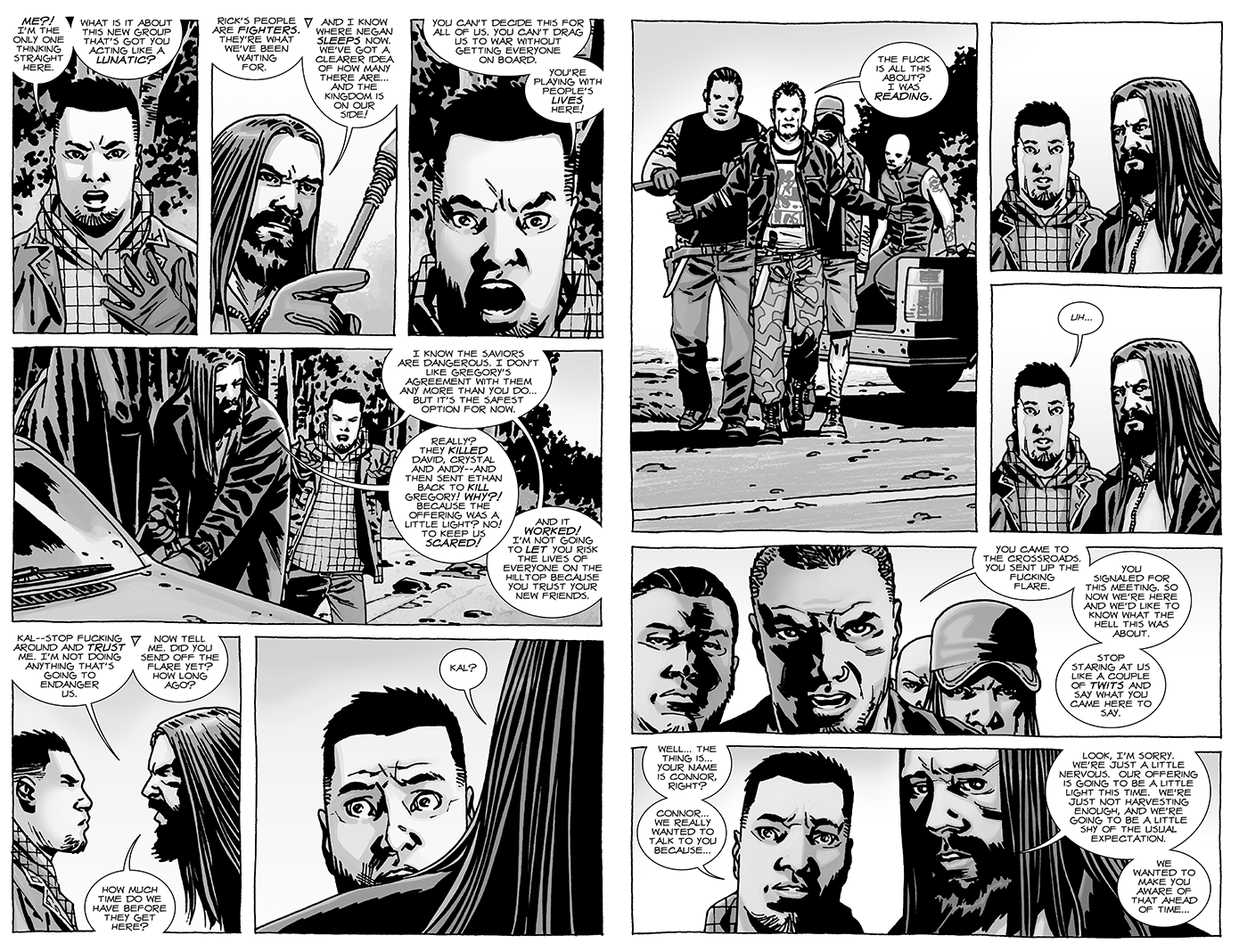 In the show Simon and The Saviors pay a visit to The Hilltop to take their half and mind-f**k Gregory a little bit. Simon pulls Gregory aside to tell him he appreciates his loyalty while simultaneously showing him who’s boss. This specific incident does NOT happen in the comics but IS accurate in showing how subservient Gregory can be with The Saviors. 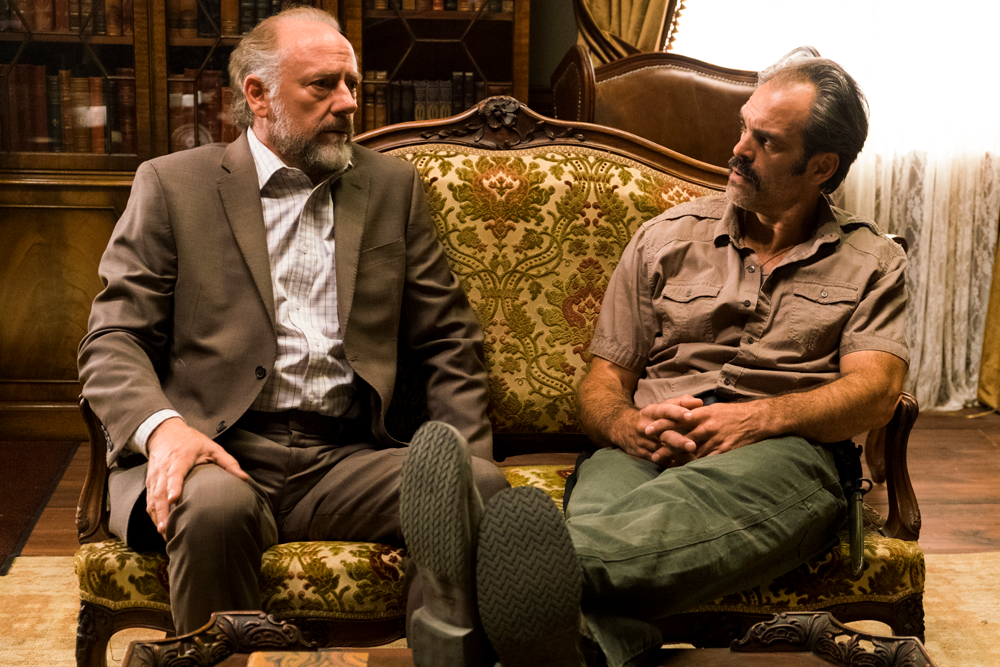 In both the comics and show Jesus and Gregory’s relationship is very contentious. Jesus nearly always disagrees with Gregory’s weak leadership and oftentimes audibles to his own plan.

SHOW: Jesus repeatedly has to beg Gregory to allow Maggie and Sasha stay at The Hilltop, which he agrees to…for a night. Later, Gregory tries exposing Maggie and Sasha when The Saviors arrive but Jesus had moved them. 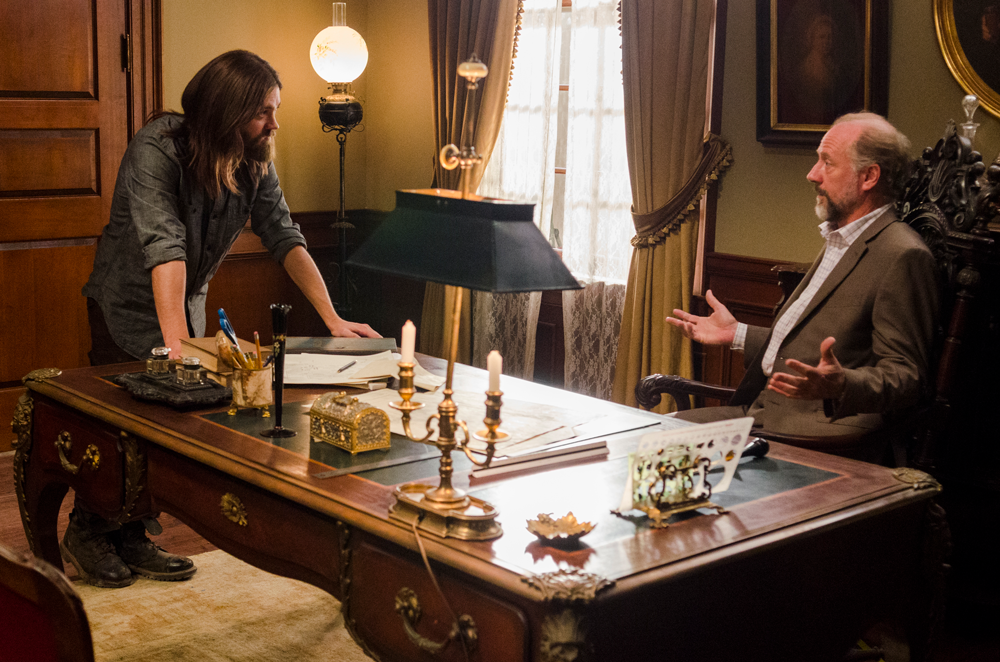 COMICS: As we’ve mentioned at this point in the comics Rick and the other communities are planning a war against Negan and Jesus tries dragging The Hilltop into the fight. Gregory resists at every turn but Jesus goes behind his back anyway. This results in numerous fights between the two that bear serious ramifications down the road. 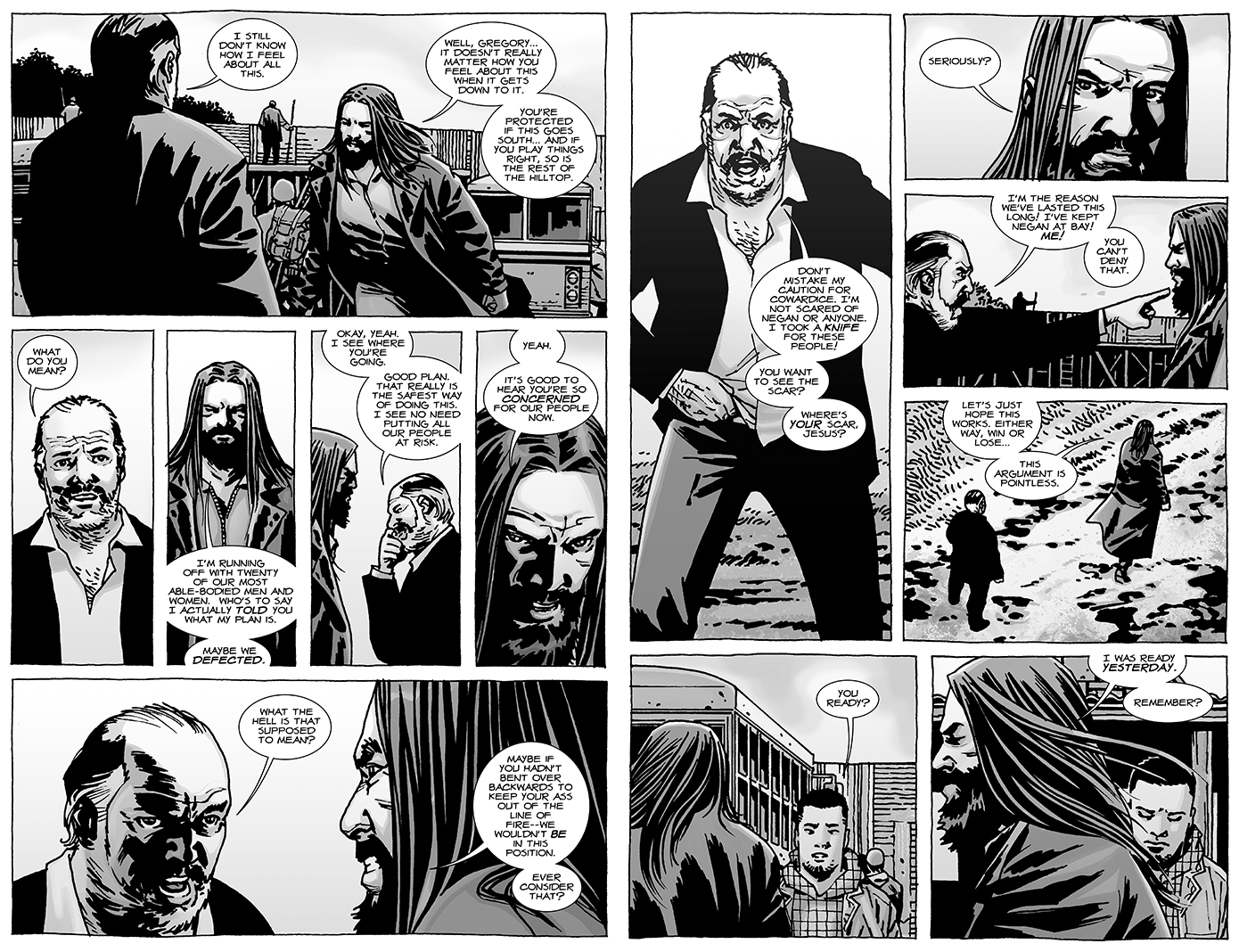 The punch heard around the world happened in the comics too, but under different circumstances.

SHOW: After Simon and The Saviors finish looting The Hilltop, Gregory calls the visit a success. Jesus disagrees and demands that Maggie and Sasha be allowed to remain. Gregory reluctantly accepts and tells Maggie the Saviors CAN be reasonable, which leads to Maggie clocking him in the face. Maggie retrieves Glenn’s pocket watch from him and asserts she WILL stay at The Hilltop and from now be referred to as Maggie Rhee (in the comics she says Maggie Greene). 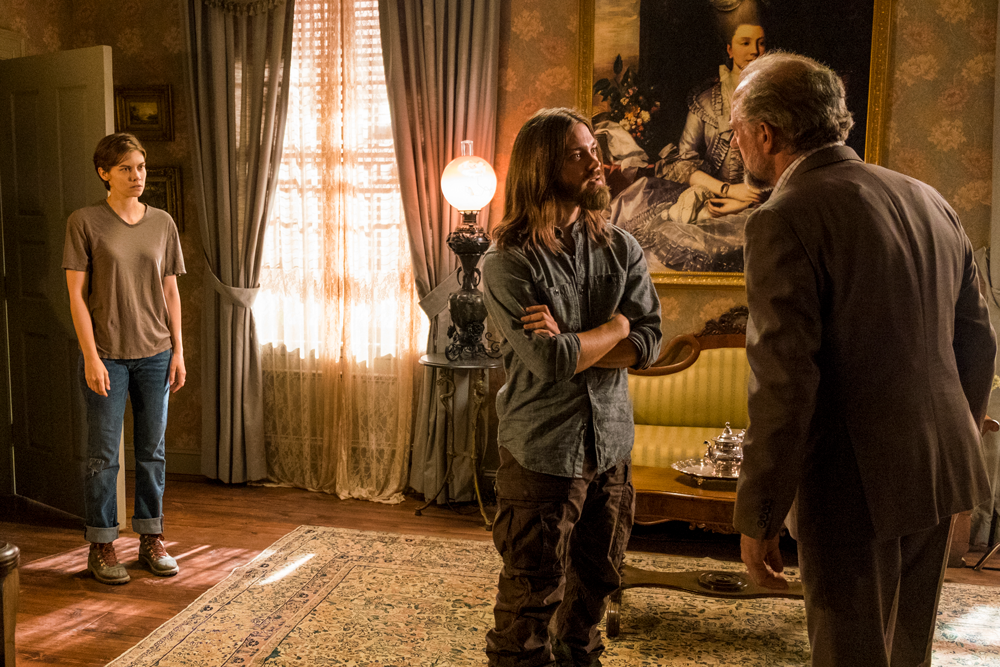 COMICS: The dramatic moment in the show where Maggie punches Gregory is a combination of two comic events. The first happens when Rick travels to The Hilltop to inform Gregory about Glenn’s death. Gregory panics and asks if Negan now knows about their secret agreement between The Hilltop and Alexandria. Rick punches him and demands why he didn’t warn him of how dangerous Negan and his men were. Gregory claims they didn’t realize Negan actually existed. 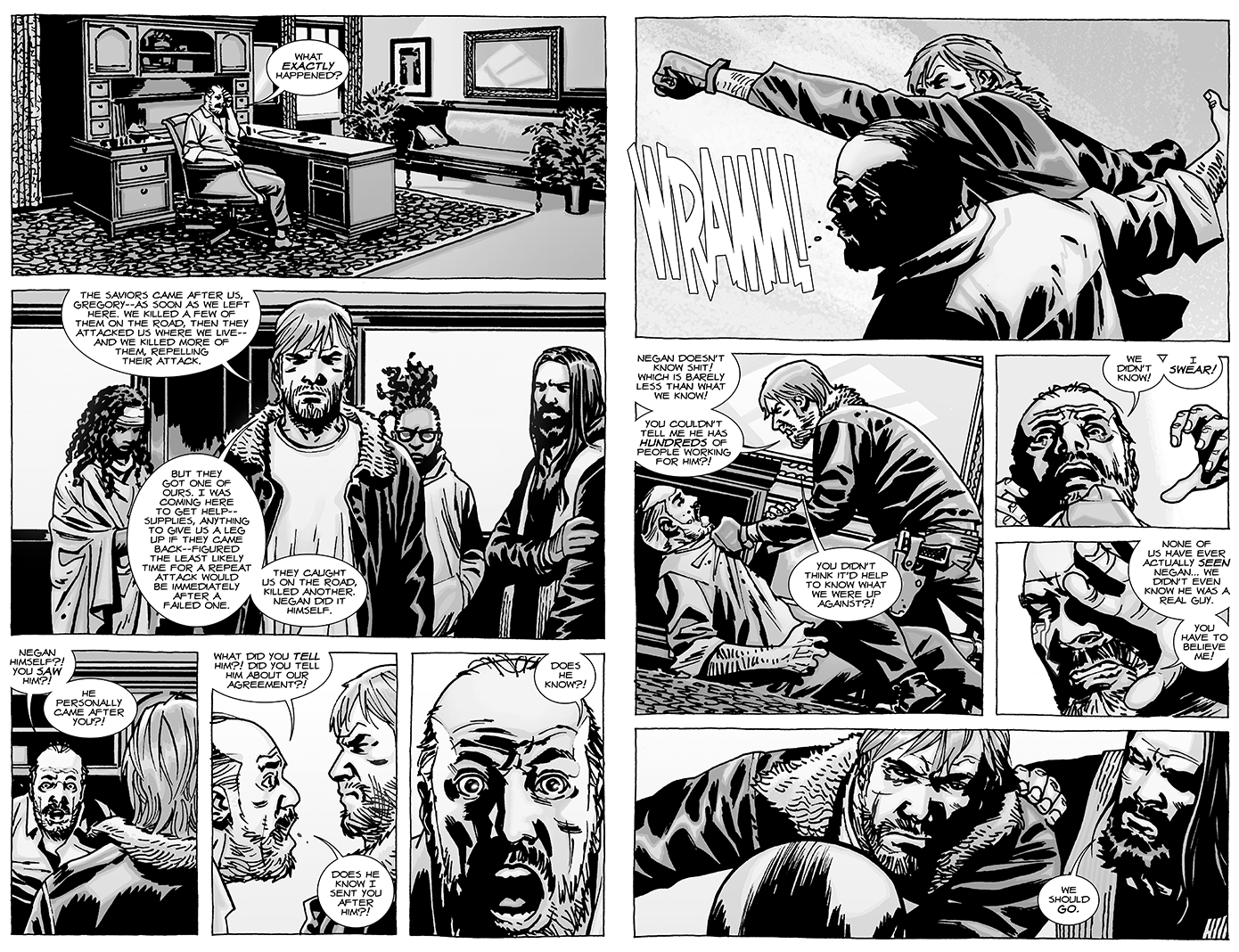 The second comic reference DOES involve Maggie punching Gregory for calling The Saviors “reasonable”…but this occurs MUCH later. At this point in the comics, Alexandria, The Hilltop, and The Kingdom are planning a war against Negan and his men. Maggie follows up her punch by rallying the Hilltop residents to join her in the upcoming battle. 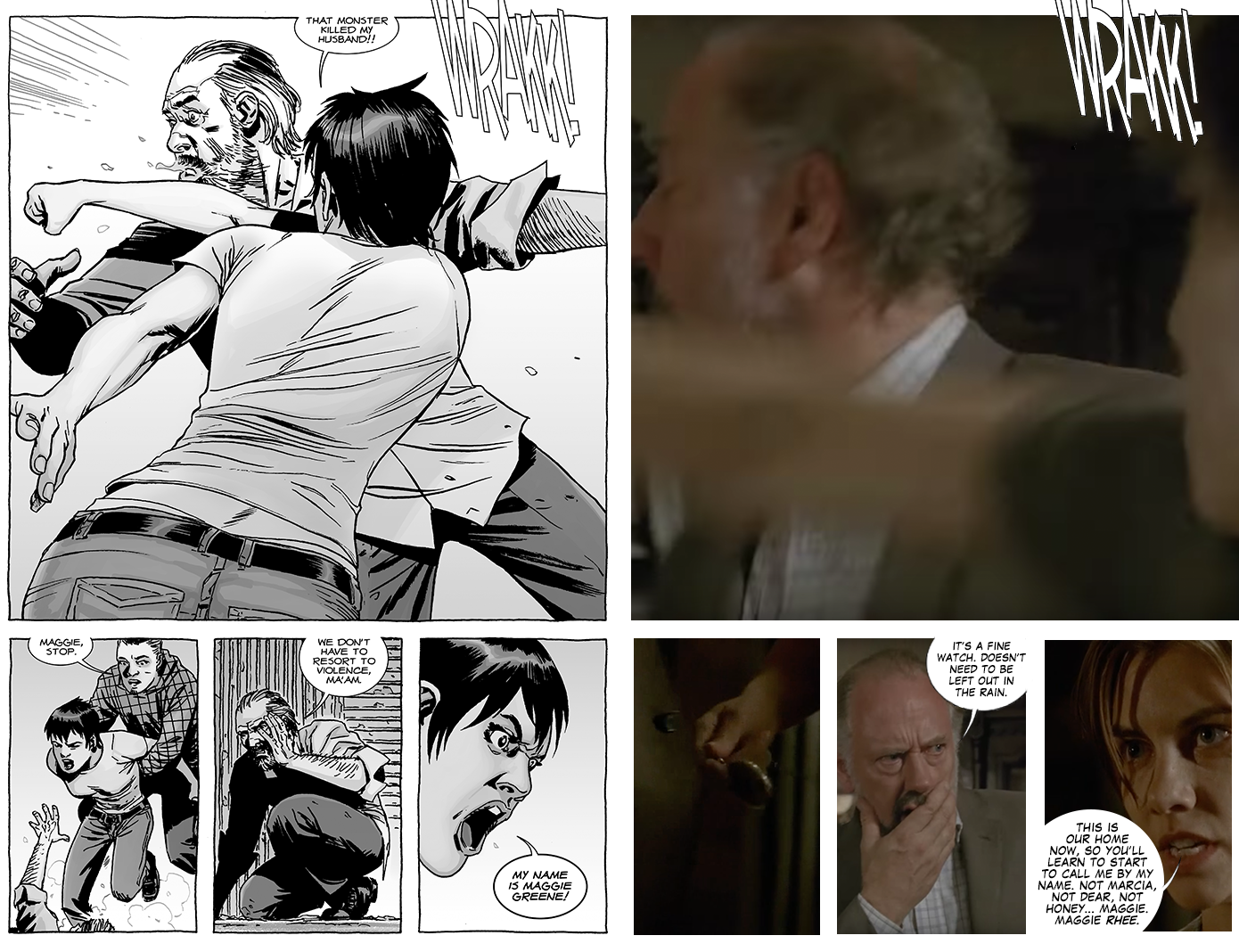 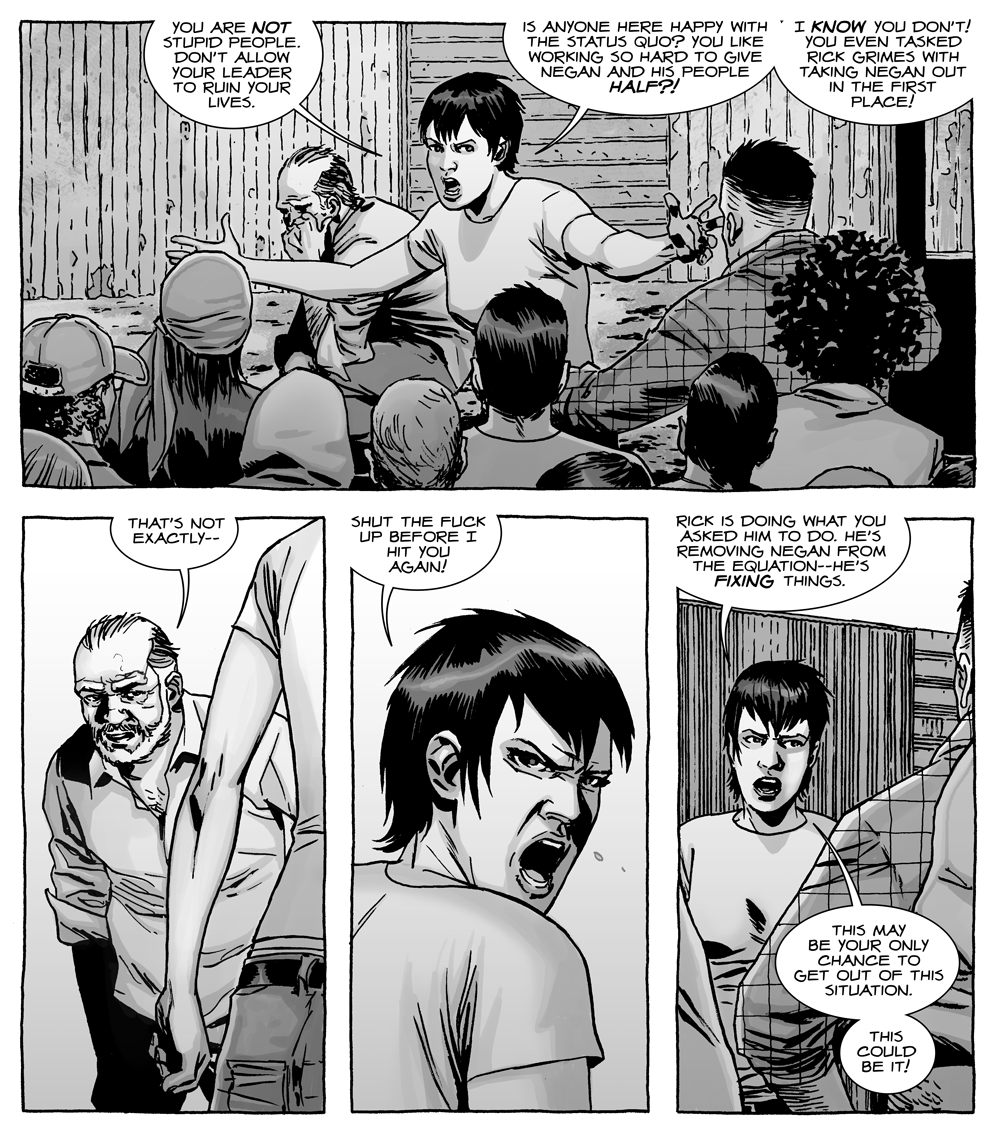 In both the comic and show Carl DOES sneak onto a Savior truck with the intent to find Negan. However, his execution of the plan differs.

SHOW: Carl follows Enid to The Hilltop where he decides to sneak on to The Savior’s truck to find and fight Negan. He’s also joined by Jesus, who’s given the same mission by Sasha. 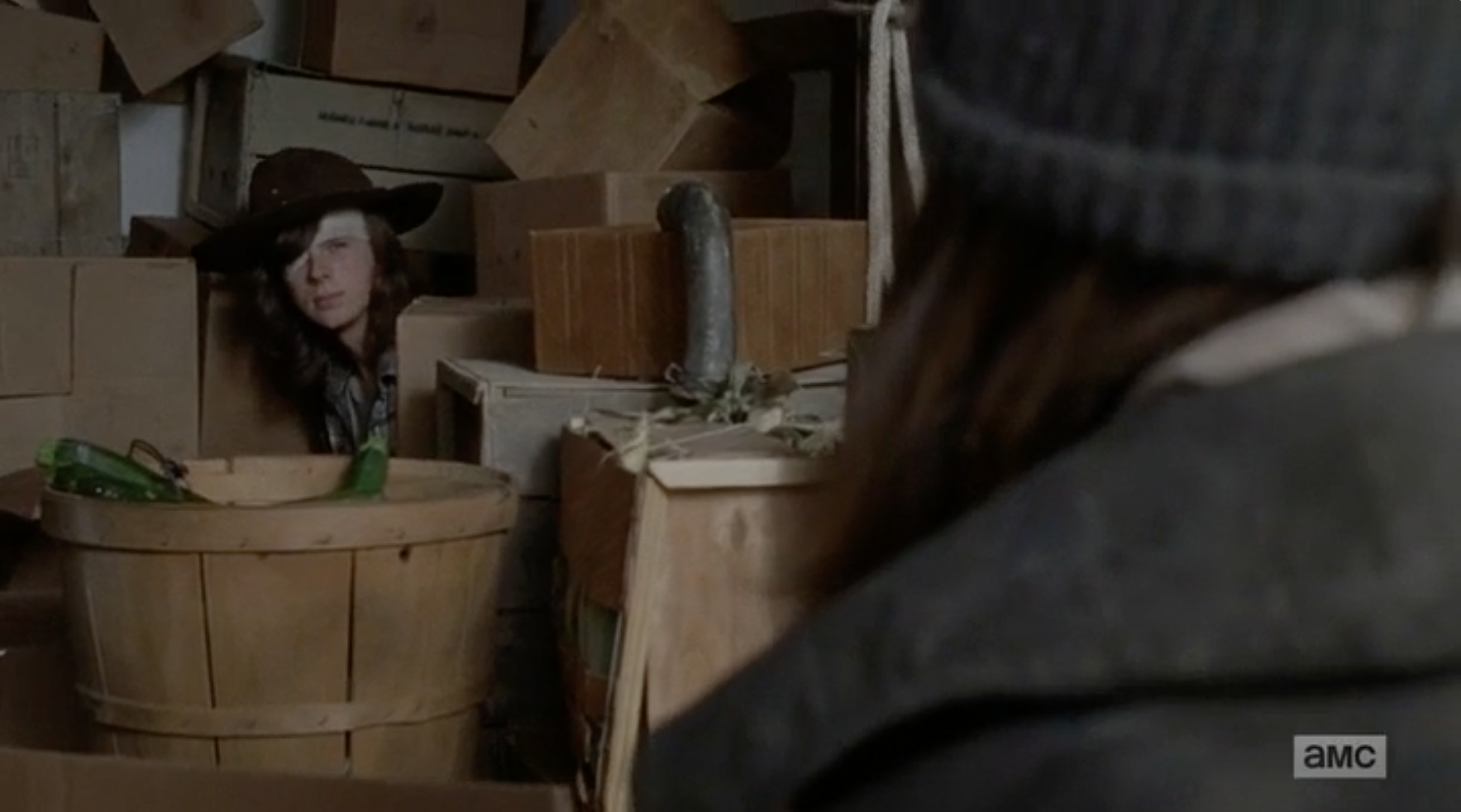 COMICS: Following Negan’s raid of Alexandria (which was played out in 704) Carl sneaks onto The Savior’s truck to seek retaliation against Negan and The Saviors. We won’t spoil what happens next. 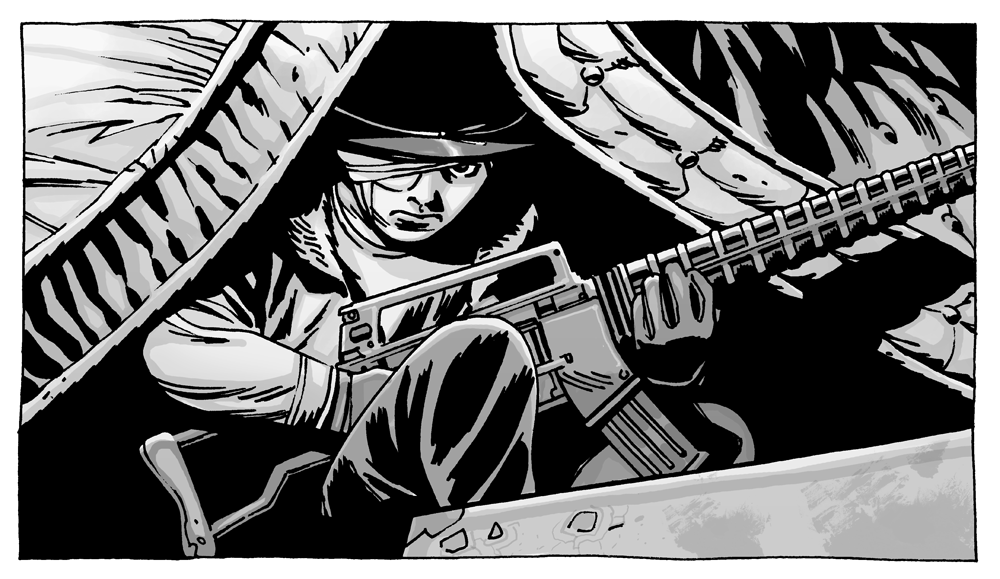 There you have it: all the major comparisons between this week’s episode and the comics. What were YOUR favorite comparisons? Tell us in the comments!

Out This Week: November 21st