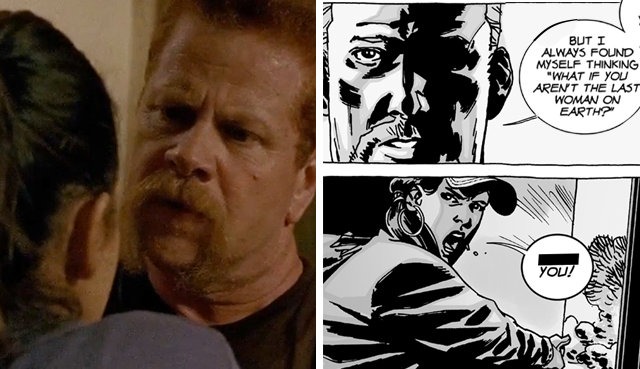 How Episode 612 Compared To The Comics

Despite the fact Rick and the gang broke into a compound and massacred dozens of unsuspecting Saviors, one of the most SHOCKING moments (unless you read the comics) of Sunday’s episode was Abraham’s abrupt break-up with Rosita. After developing feelings for Sasha over the season Abe decided he couldn’t live a double life and moved out! So, how much did AMC take from the comics? What was left out? Below we break down how the split differed in the comic and show ALONG WITH an interview with Michael Cudlitz!

Similar to the show, comic Abraham has a tough exterior but is lonely inside. He emotionally relies on the people around him and will lie to keep them around. Although he initially tells Rosita he loves her, he ends up cheating on her with a woman from Alexandria named Holly (Sasha isn’t in the comics). To his surprise Rosita finds out about the affair and dumps HIM. Infuriated, Abraham drops the now classic “What if you aren’t the last woman on Earth?” line and Rosita storms out (unfortunately/fortunatly no dingleberry references). Here’s how it went down: 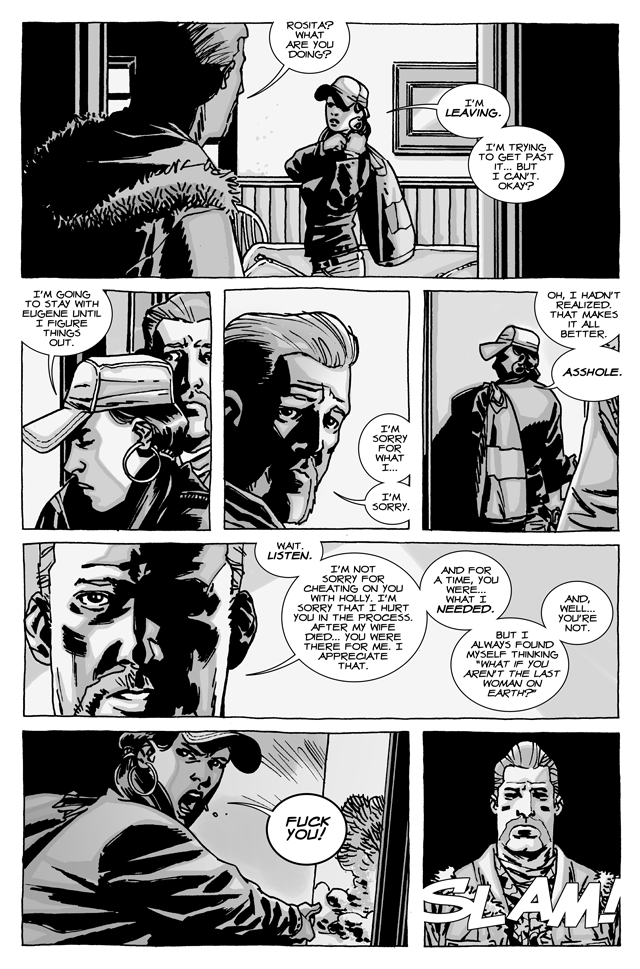 Ouch. In the aftermath, Rosita shacks up with Eugene (as friends) and Abraham stays with Holly. Later, in Abraham’s *ahem* darkest moment he tells Eugene he still has feelings for her and hopes she can find the happiness he has with Holly. In the show, Abraham becomes overcome with guilt of his feelings for Sasha and leaves Rosita in an emotional mess.

In the show, it’s Abraham who blindsides Rosita and walks out on HER. Actor Michael Cudlitz reveals his thoughts on how it played out to ComicBook.com:

“I think she forged him into that. I don’t mean to blame her, obviously he’s the one who f—ed up in the sense of, “Is it f—ed up to fall in love with someone else?” You know? I don’t know,” Cudlitz says. “When you’re in a world where everything has been rebuilt or they’re trying to rebuild and you’re not a character who lies and you are a character who would rather not hurt somebody, if you fall in love with somebody, how do you best do that? I don’t think Abraham is equipped to handle that in any other way other than to be honest about it. 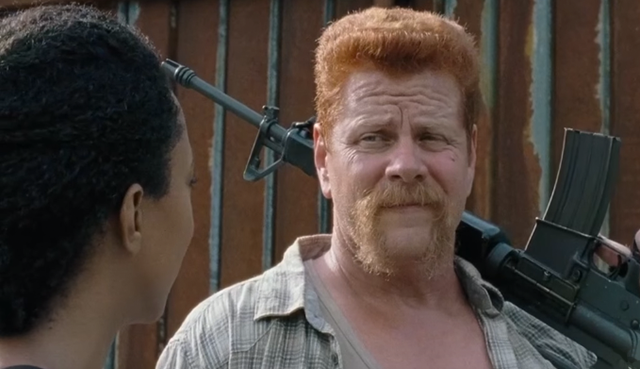 “I think he’s processing it and he knows that he has to leave and he’s come to the conclusion that he has to leave and he’s like, ‘Well, I’m gonna leave. It’s gonna be easy.’ And she’s like, ‘Why? Why? Why?’ She’s pushing for the why. He doesn’t really have the words to do it in a soft gentle way in that moment but it certainly pains him to do it. I think he’s much more used to dealing with men. It’s just the way it is is the way it is. He’s not good at doing that, apparently. I’m sure the character is gonna get some blow back and I’m gonna get some blow back because people aren’t gonna be happy about that but that’s life. I don’t think he is equipped to handle it in any other way.”

In the comics Rick also rallied the Alexandrians into the church to convince them to attack the Saviors subsequent to making a deal with Gregory at The Hilltop. Only in the comics Morgan didn’t protest because Morgan was, well, um, anyway… 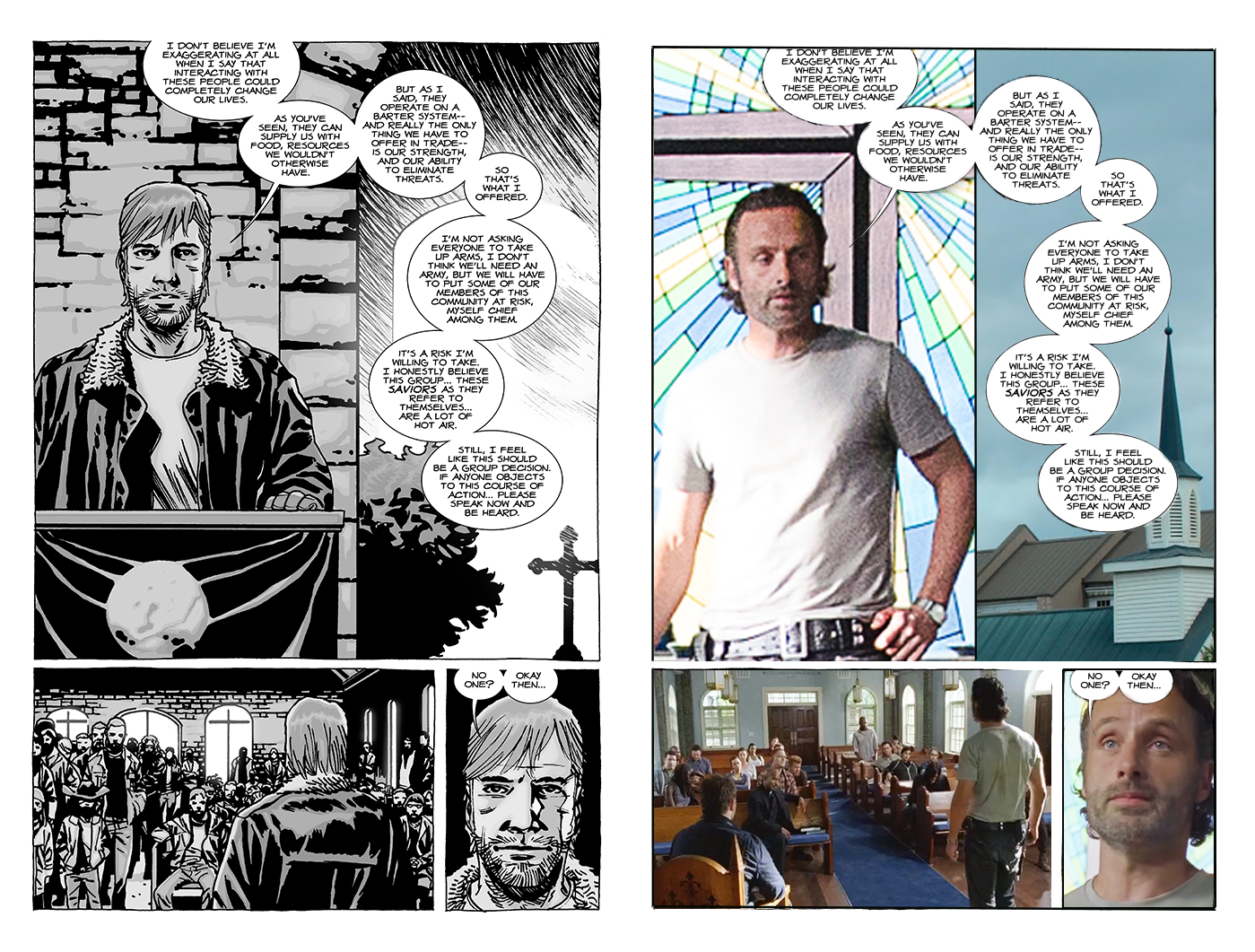 Despite the show taking creative license with some of the storyline, there was no mistaking the obvious foreshadowing of future comic events. For example, spoilers aside this charming wall of Polaroids hints at a MAJOR moment from the comics coming to fruition soon: 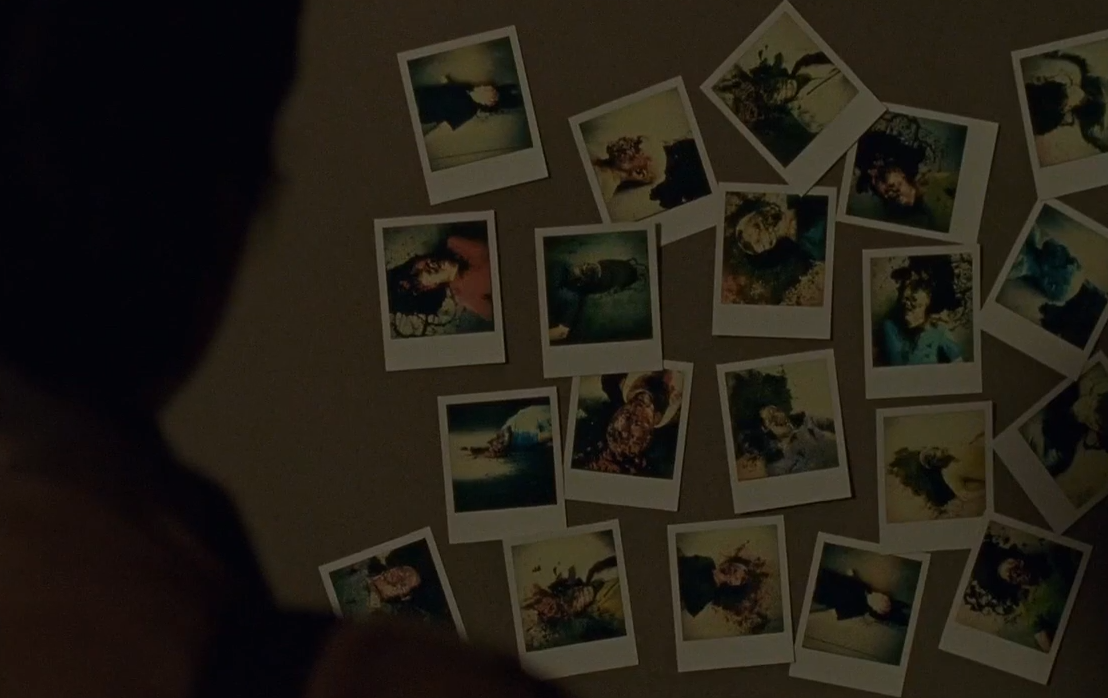 Additionally, that cell that Morgan’s building will DEFINITELY play a role in the future: 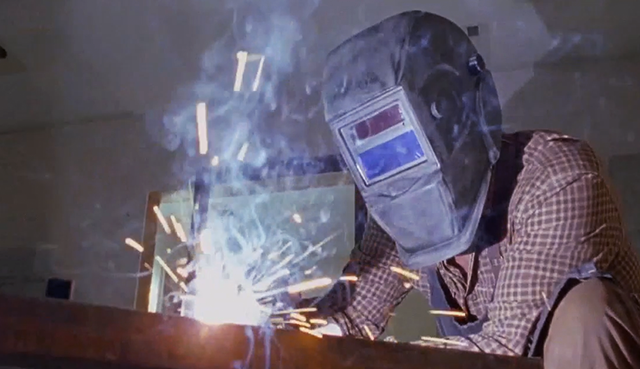 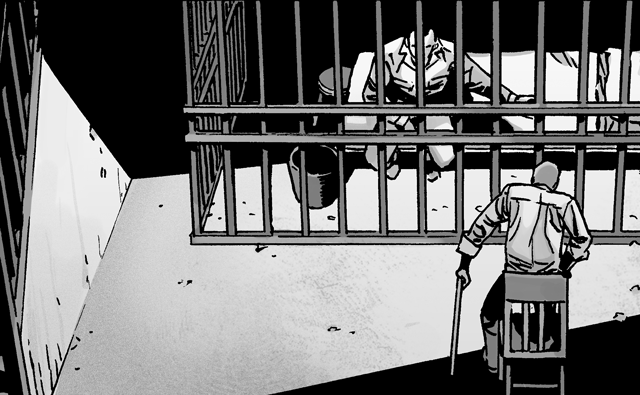 You might be wondering if Rick and the gang ALSO raided the Savior compound and sleep-murdered everyone in sight. Not exactly…BUT Rick’s gang DID take out a group of Saviors around this time in the comics… 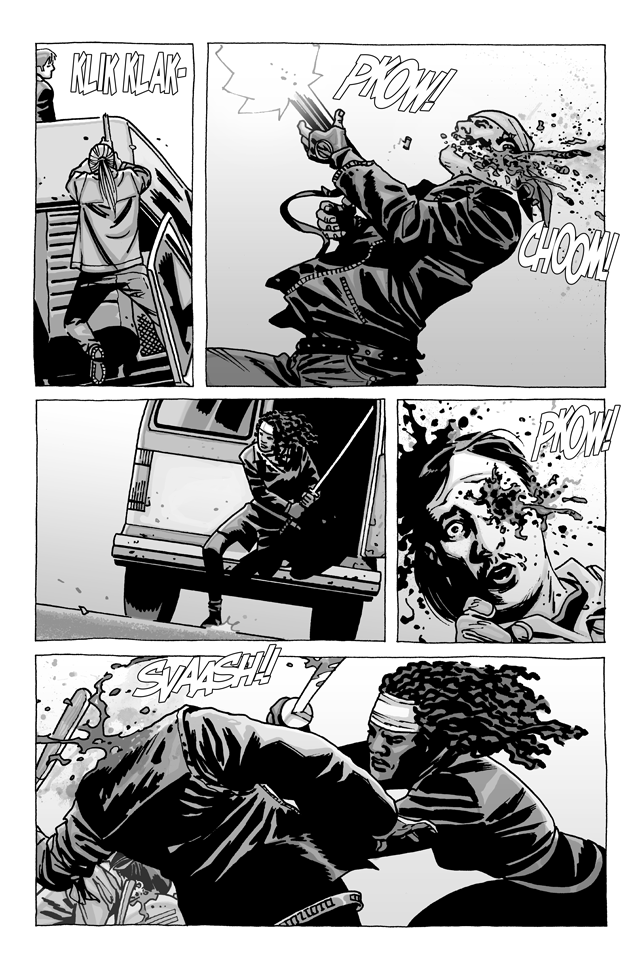 HOWEVER the show kind of already covered this scene in the beginning of the Mid-Season Premiere: 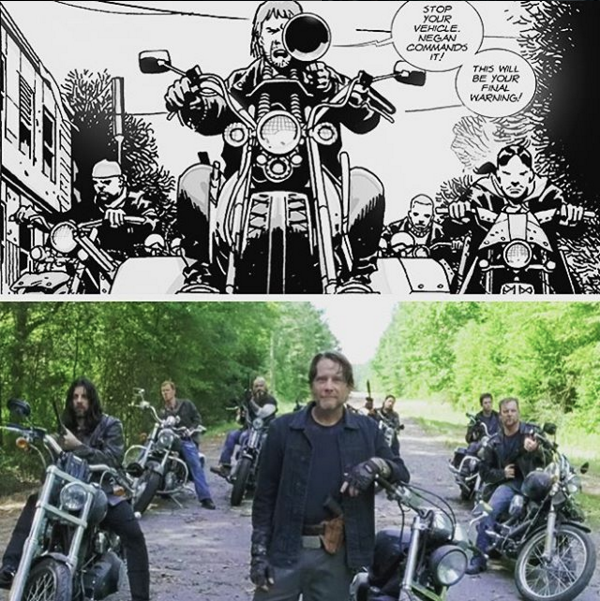 Either way, Rick and the gang have a LOT to worry about in the upcoming episodes…

Home | The Walking Dead | How Episode 612 Compared To The Comics

Maggie & Carol Are In Trouble In 613 Sneak Peek

What Was Morgan Building In Last Week’s Episode?