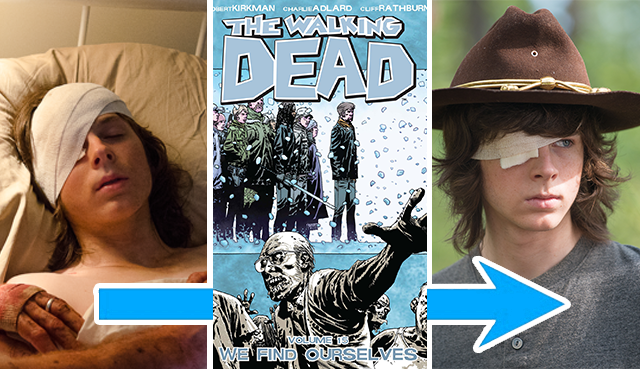 5 Things You Missed During The Walking Dead Time Jump

You probably noticed in last Sunday’s episode that there was either a time jump or Carl made the most miraculous recovery in the history of medicine. Either way, a ton of ground was covered during the two months in between Episode 9 & 10. Thanks to the comics (Volume 15, to be precise) we can help you fill in the blanks!

Carl didn’t just wake up, jump out of his bed, and start arguing about toothpaste with Michonne. In the comics, Carl’s in a coma for WEEKS and Rick is stationed by his bedside (he even admits to Denise he doesn’t believe Carl will make it). After a few “I think he’s awake!” false alarms, Carl finally regains consciousness. Unfortunately, he experiences mild amnesia and Rick has to remind him that his mother died, who Denise and others are, and that he had a baby sister (who in the comics died with Lori). To Rick’s dismay, Carl seems unfazed by all this news.

Rick, who’s emotionally spent, begins to hate Carl for not sharing his grief over Lori’s death. He even breaks down in tears during a supply run and admits to Andrea (yes, Andrea) he fears he’s lost Carl due to the memory loss. Eventually, she snaps him out of it and he’s later able to reconcile with Carl and get things semi-back to normal. 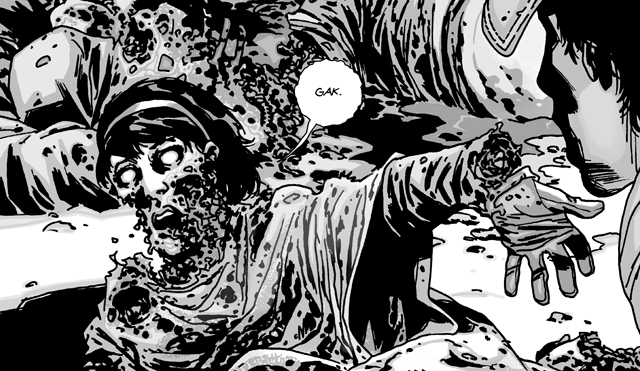 Carl’s not the only one to awake from a long slumber. Remember Jessie: Rick’s cute love interest who was unable to produce a child with a bravery level higher than a cat in a bathtub of snakes? Well she’s BACK…kind of. During the town clean-up of the double-Gettysburg level of walker bodies, an undead Jessie awakens and startles Glenn.

After Glenn refuses to have a HAND in taking action on the zombified Jessie, Abraham puts her down for good to ensure Rick doesn’t find out…because we all know how Rick deals with dead love interests. Speaking of…

Dating is rough in the zombie apocalypse, especially when your significant others keep getting significantly murdered in front of you (still not as tough as the online dating scene in LA, but close). During Carl’s coma Rick begins imagining his life without his family and decides to dial the only person he knew to call…his dead wife Lori.

In the comics, Rick used to hallucinate hearing Lori’s disembodied voice through a (disconnected) phone but had mostly put that behind him. Now faced with grim circumstances, Rick imagines hearing Lori blame him for her and Judith’s deaths along with Carl’s injury. Safe to mark this one as a loss in Rick’s battle with his sanity. 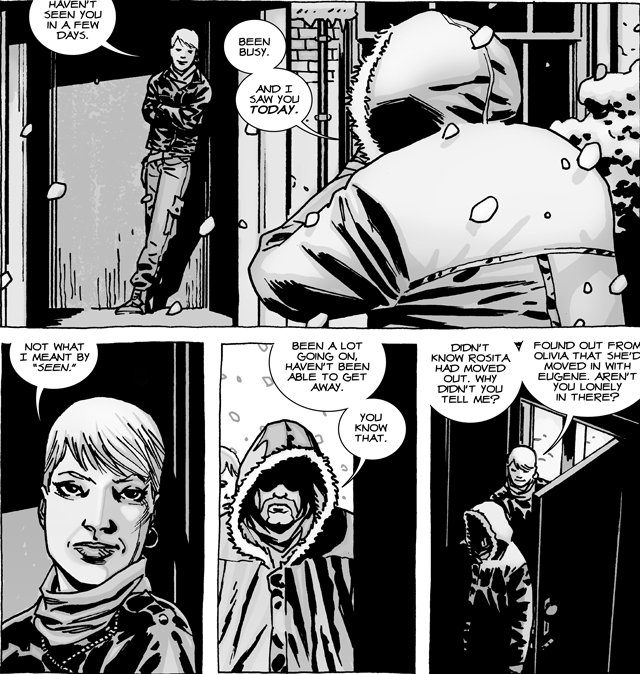 In the comics AND show Abraham juggles two women (giggity). Both involve Rosita, but the other woman in the show is Sasha (not a comic character) while the other woman in the comics is Holly (was in a show for an episode, got killed earlier this season). Either way, that ginger lumberjack is a hot commodity in Alexandria and (during the time jump) Rosita was NOT having it. In fact, she moves out and shacks up with Eugene (platonically) while Abraham moves in with Holly…rather NOT platonically: 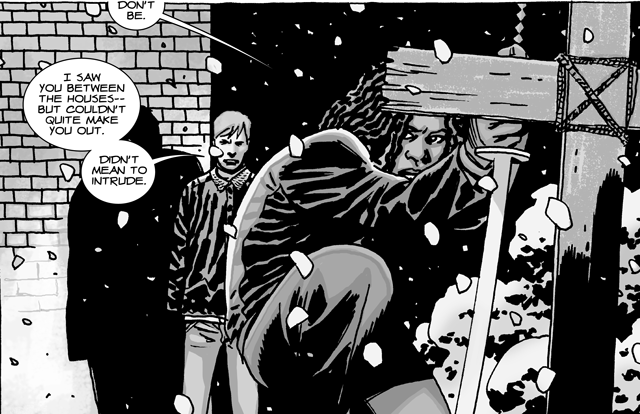 Perhaps the most significant thing the time jump skipped was an ENTIRE WINTRY SEASON. Sorry guys, looks like we’ll have to wait even longer for snow to reach the show. A snowy Alexandria changes everything: the walkers are harder to spot, supply runs are trickier, and graveyard heart-to-hearts seem emotionally heavier. So, did it actually snow on the show and they just skipped past it or was there never any snow? We’ll let you speculate.

And yes, we did use Rick/Michonne panels to illustrate the frosty weather because #RICHONNE COULD HAVE HAPPENED IN THE COMICS. Actually, what ended up happening during this time jump was a version of that…only with Rick and Andrea (#Randrea). Observe the familiar make-out: 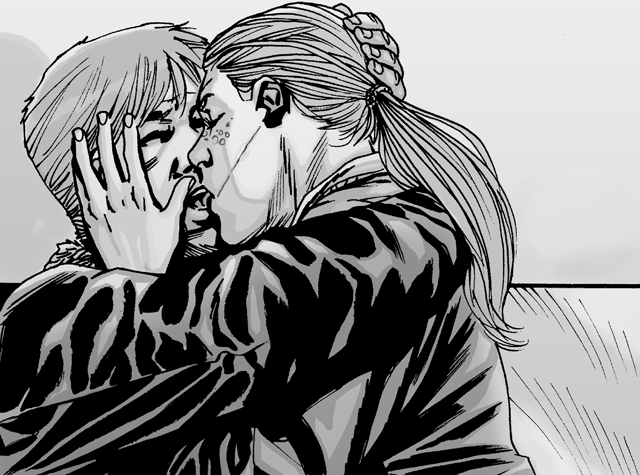 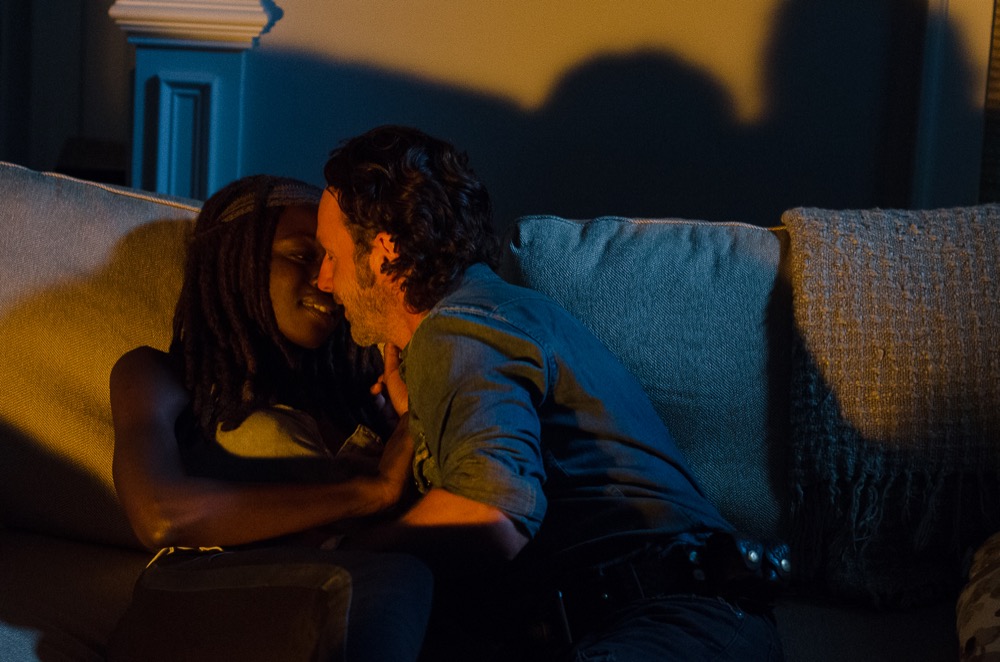 (BTW comic Andrea is MUCH cooler than her show counterpart…comic fans were psyched about their relationship).

Which comic moment from the time jump do YOU wish played out on screen? Let us know in the comments!