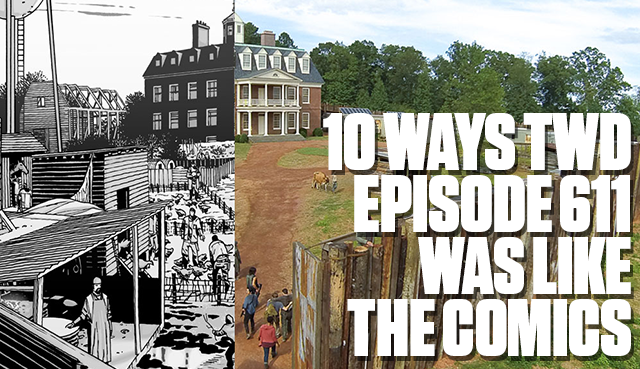 10 Ways The Walking Dead Episode 611 Was Like The Comic

The Walking Dead Season 6 Episode 11 introduced us to new locations, characters, and ways for Rick to show how much of a f**k he no longer gives in new communities. We break down the madness below:

Sure, this may have gone down SLIGHTLY differently in the comics (Jesus was tied up pretty much until they reached the Hilltop…plus Carl convinced Rick to trust Jesus) but either way, Carl was surprised. 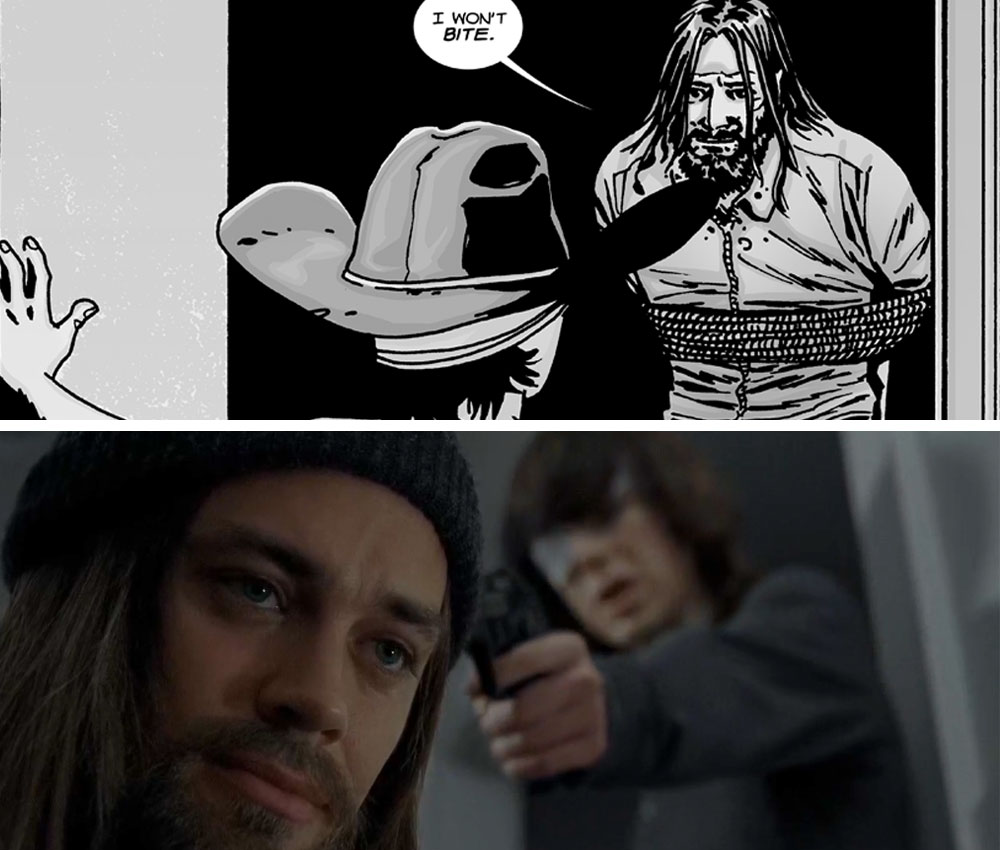 Don’t Bring A Spear to a Gun Fight

“If you don’t put down your guns we’ll throw a spear at 5mph toward your general area!” – probable dialogue that happens every day at The Hilltop gates. 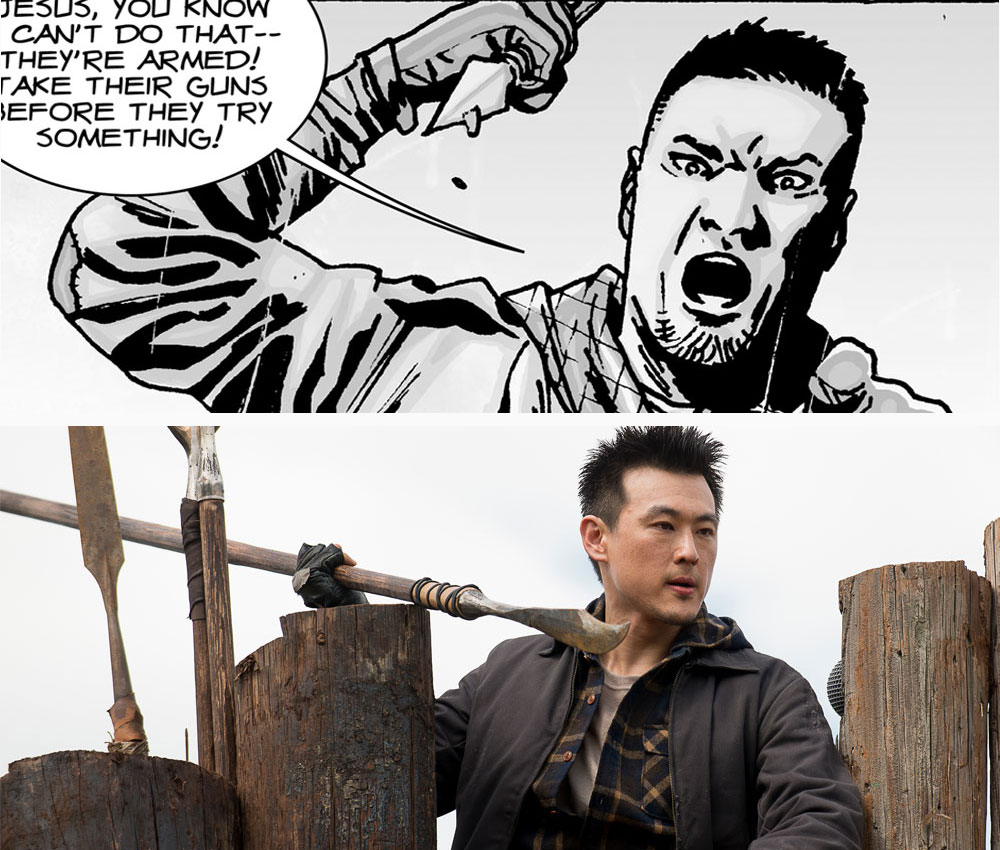 Ta-da! Campy, huh? Like a real-life version of Oregon Trail! What’s that? It’s run by a perverted egomaniac? Doesn’t matter…have you seen their blacksmith and butter churner?? It’s aDORable! 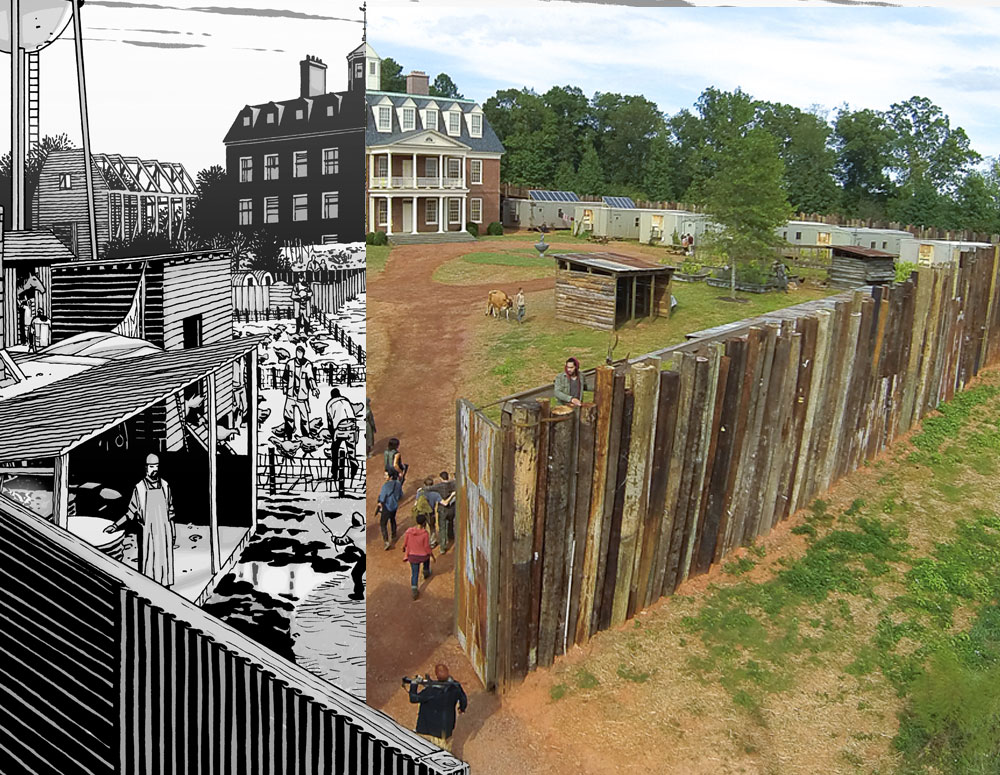 Not to be mistaken with American Horror Story’s next locale, Gregory’s hotel home has EVERYTHING. Rooms, showers, and even sonograms! 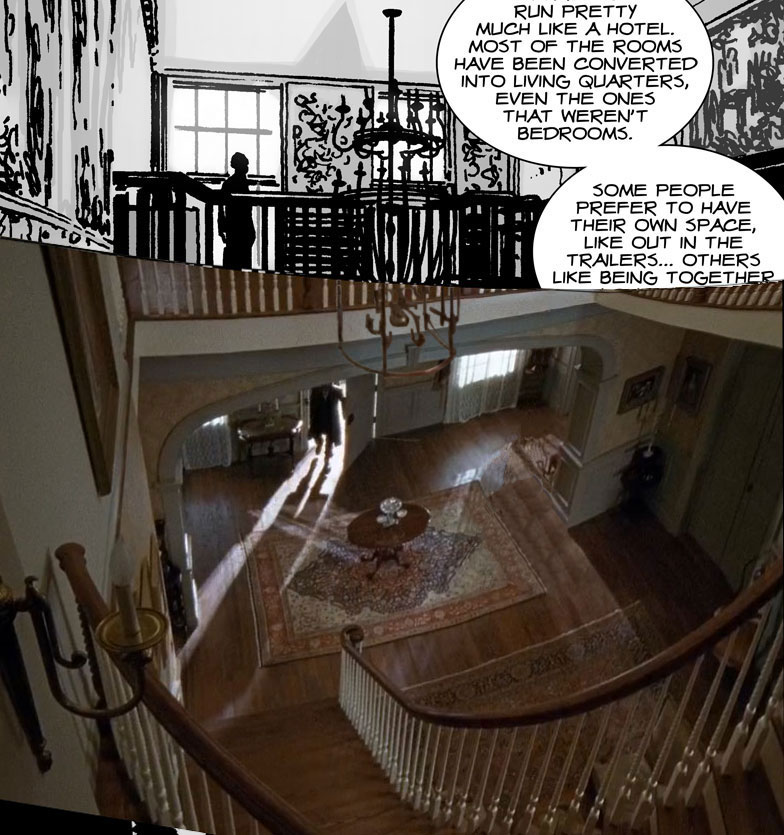 You have to admit: Xander Berkley is a 99% chance match for Gregory…1% off for not having two-dimension, black and white skin. (ALSO a 99% chance Gregory was one of those red dots on the sexual predator maps before the apocalypse, but I digress). 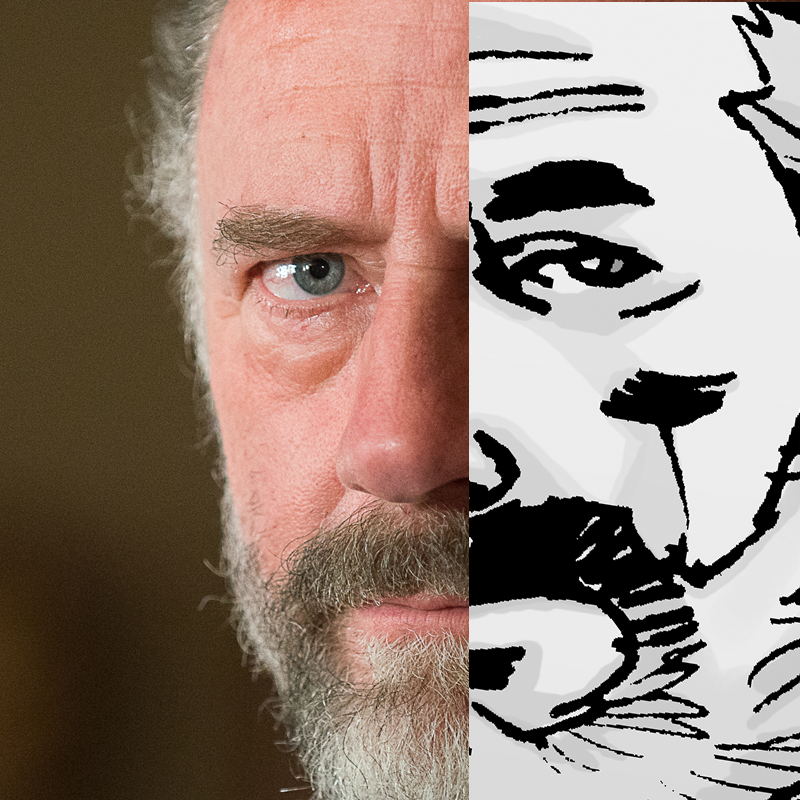 Saying sorry right before stabbing someone doesn’t make the knife hurt any less (Ethan probably sucks at relationships). Question: was Negan’s message to give Gregory a stomachache that’d he’d eventually recover in bed from? If so then bravo. If not, aim a little higher, dude. 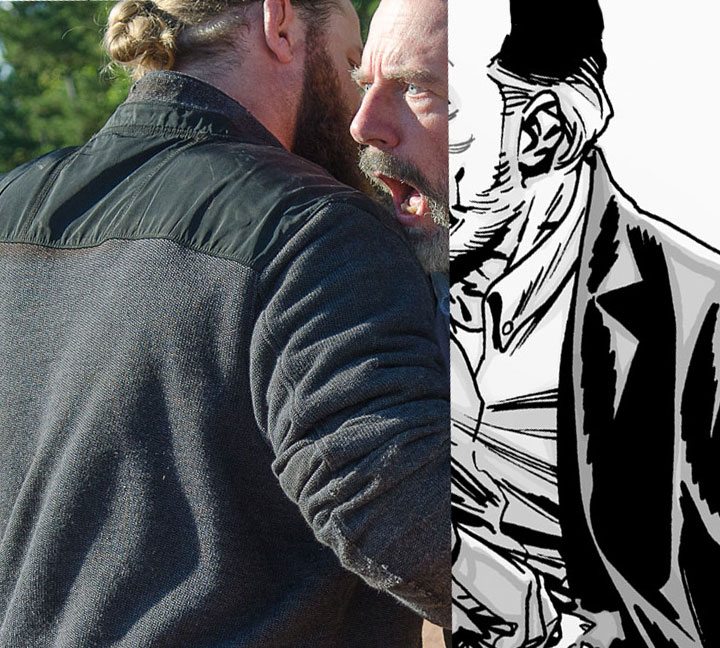 Finally Got That Bath

Hey Gregory! I know you wanted me to clean up so I decided to bathe in the blood of one of your people! Who has a towel? 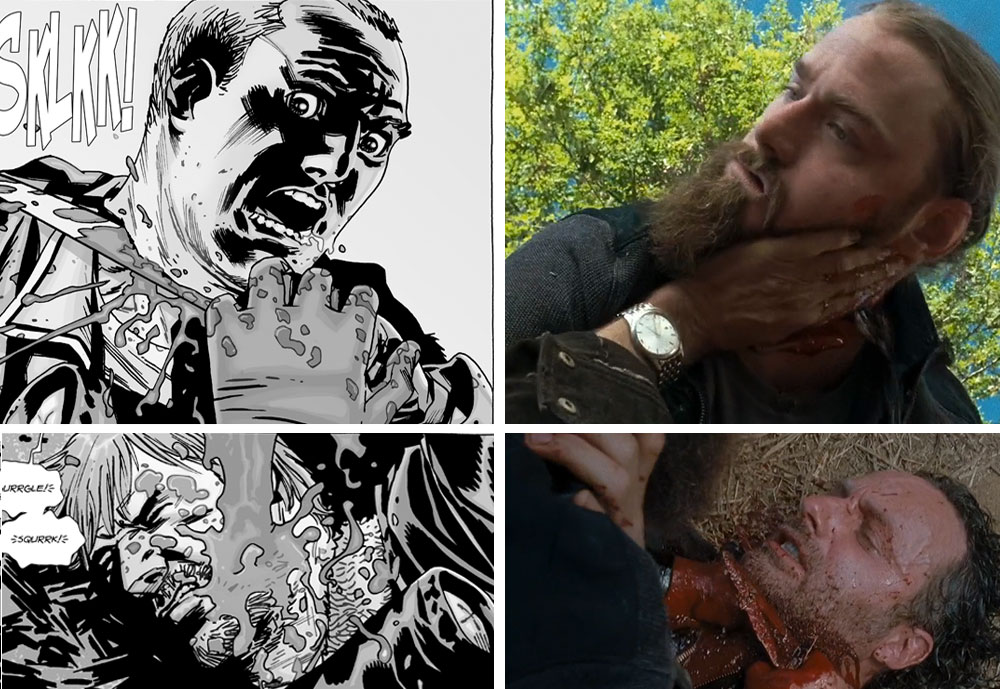 Rick has officially perfected the art of barging into a new community, killing one of their people, and saying psychopathic things to its horrified reisdents. What the hell is everyone looking at and WHO THE F**K HAS A TOWEL?? 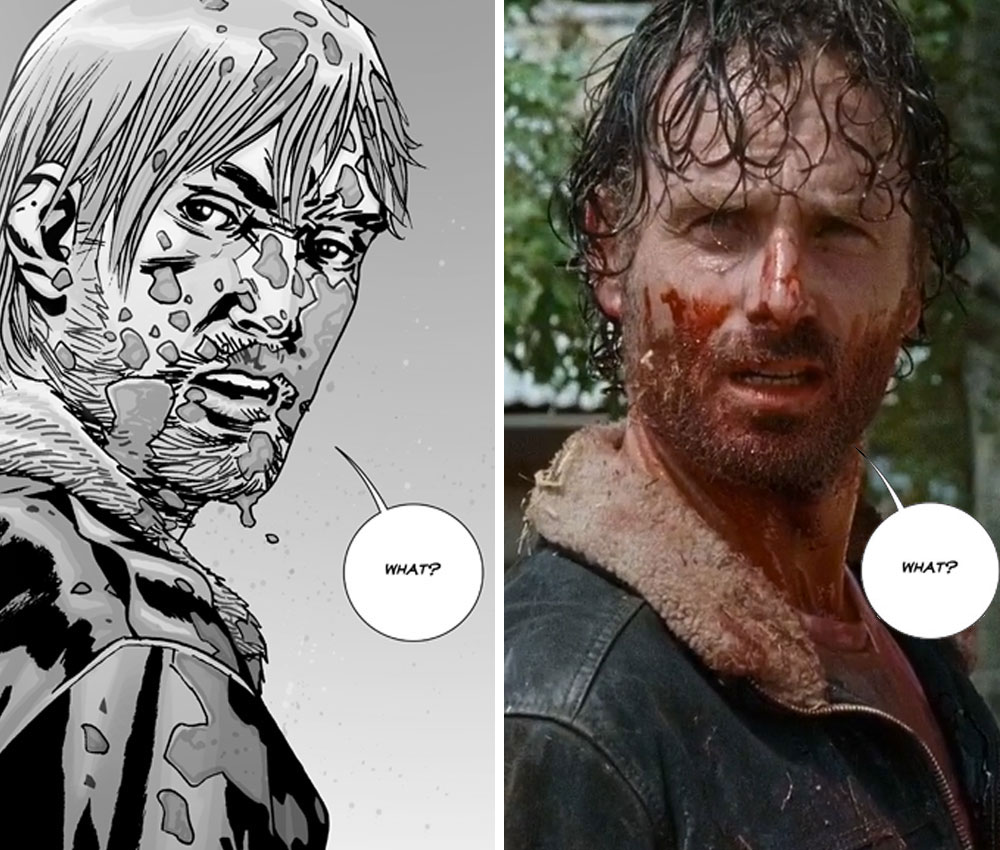 Sleep is the best medicine

As creepy and condescending as Gregory is, you have to admit he can really take a knife to the gut. Not only that, he has energy later to negotiate trade talks with another community! I’m sure he’s not ultimately a horrible person. 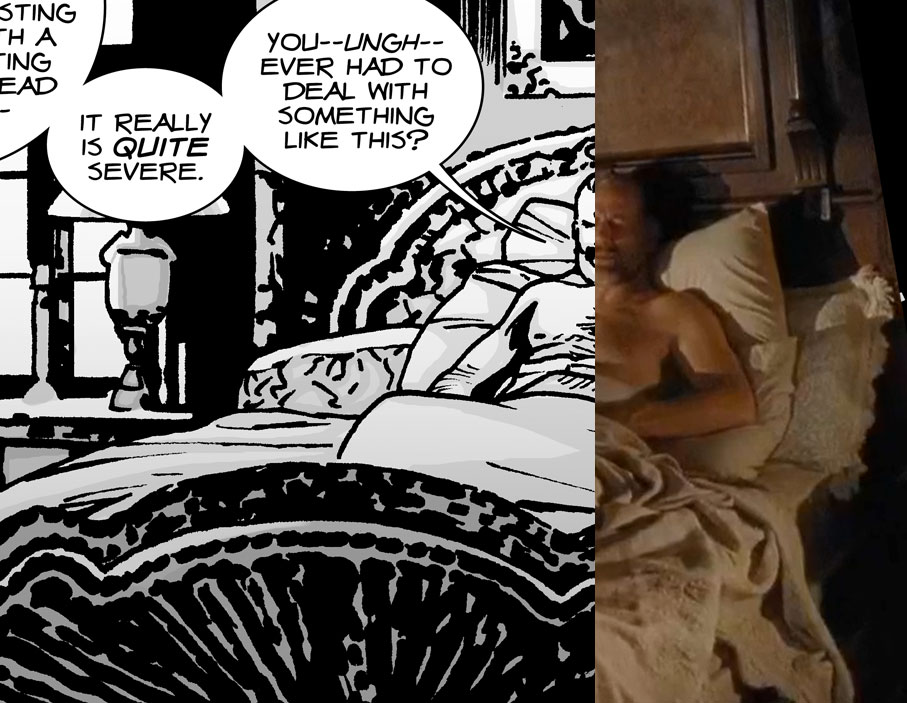 Just like the in the comics, Jesus has his 7th Heaven confession where he explains they got enemies, got a lot of enemies, got a lot of people tryna to drain them of their energy. If I were Rick I’d say, “That sounds horrible. Good luck with that.” But of course, Rick and the gang HAVE to get involved. I’m sure this won’t end in complete devastation. 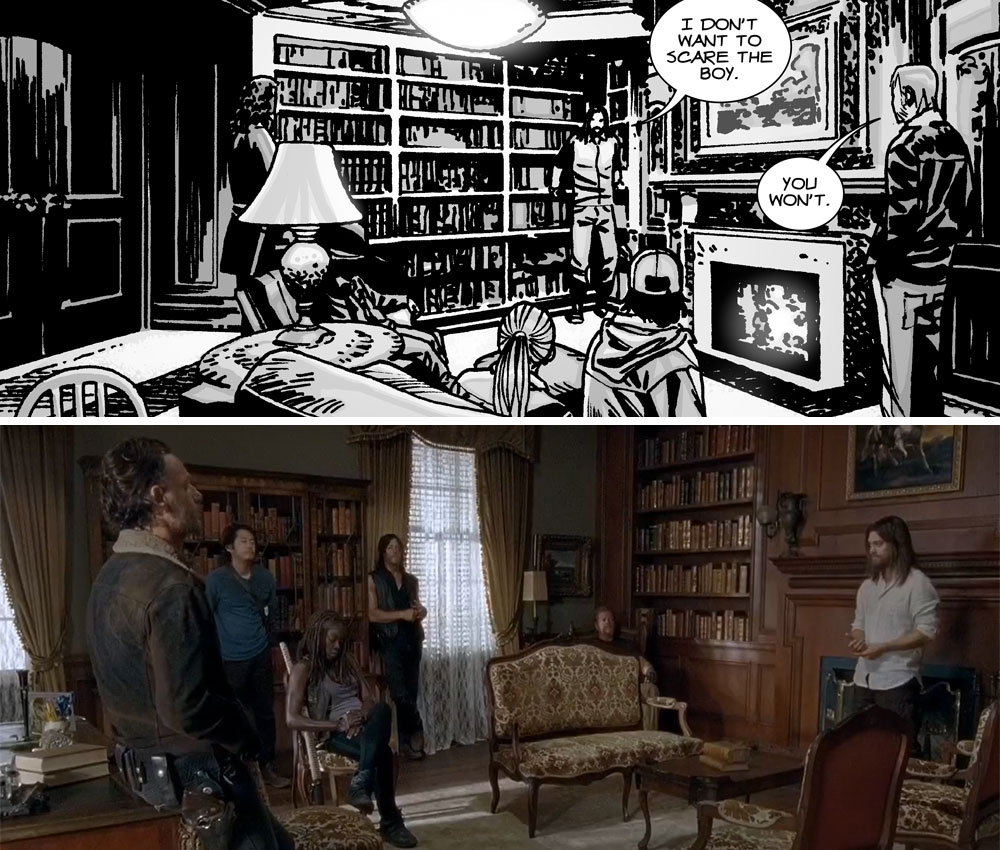 Here are some minor things they left out/changed in the episode:

None of This Happened

They DID make a stop to kill some walkers but there was no trapped Hilltoppers rescued. Also in the comics Carl tagged along, Abraham limited his incredible one-liners, and Maggie didn’t get hooked up to a sonogram. 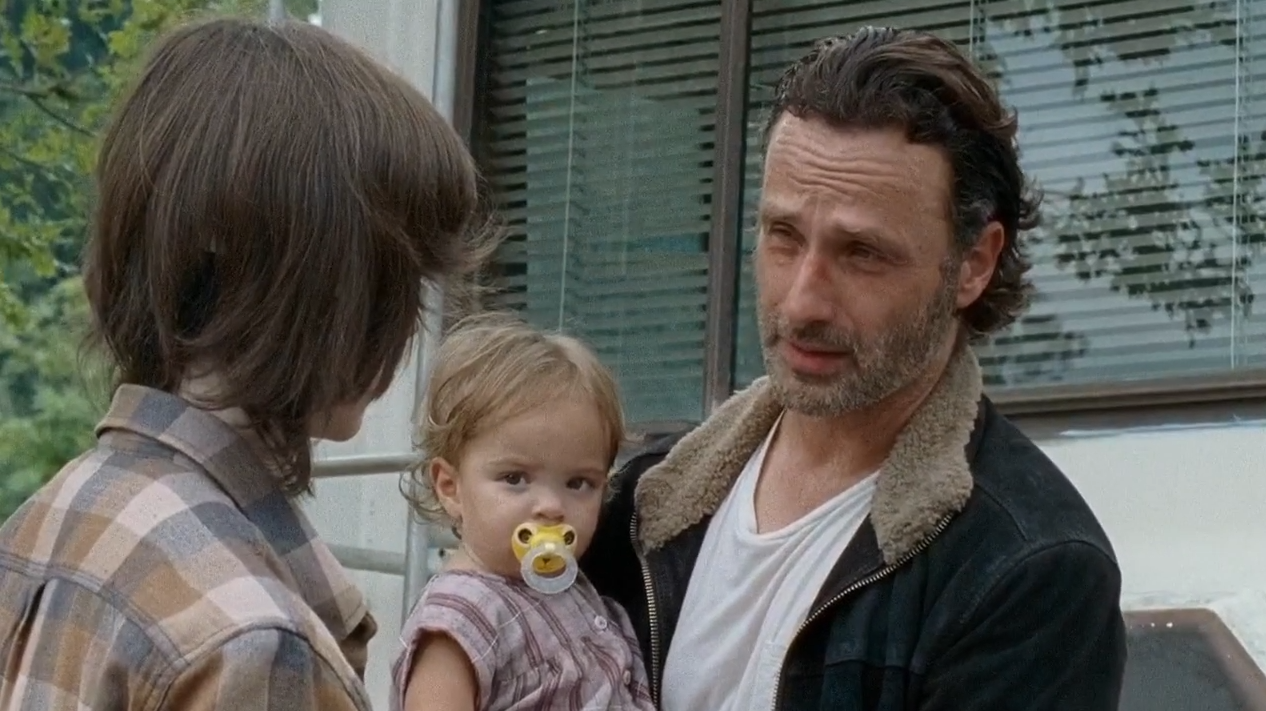 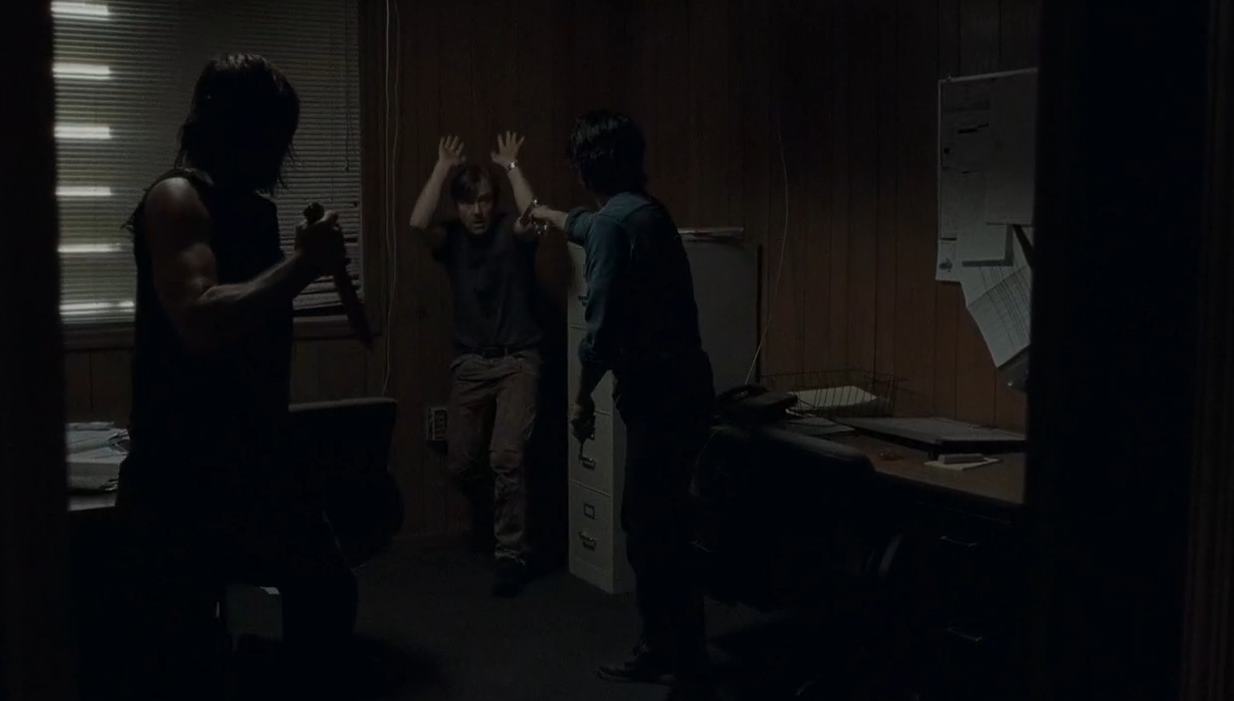 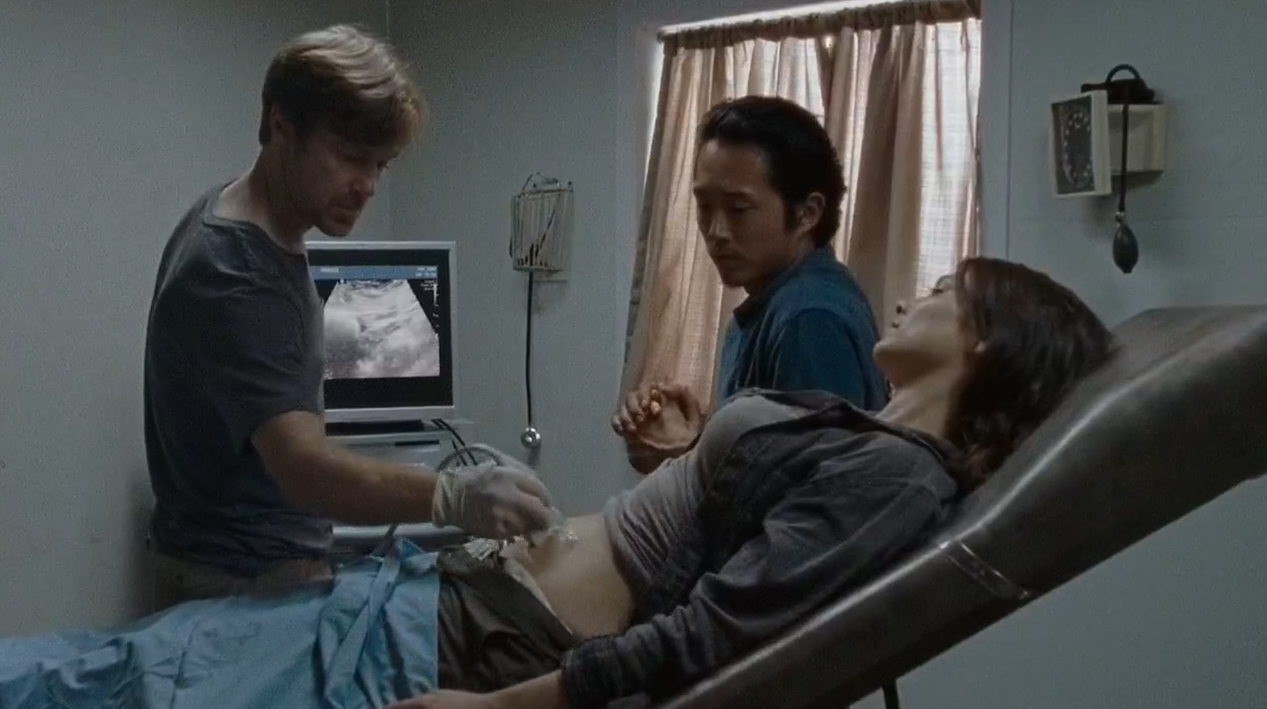 As mentioned before, Jesus is tied up during the majority of the ride to The Hilltop. Unbeknownst to Rick, he’s able to escape any time he wants but chooses AGAINST it to gain Rick’s trust. 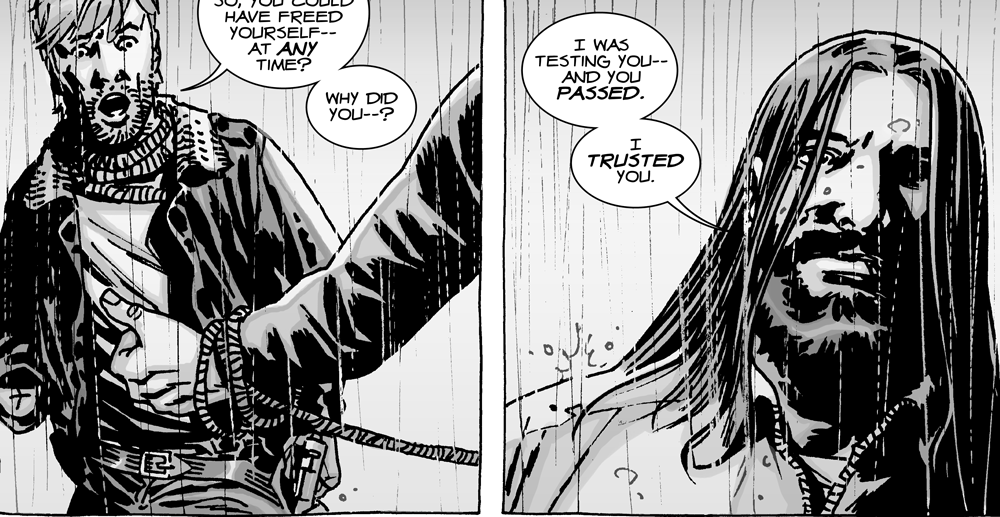 In the comics it’s Rick who takes charge in negotiating with Gregory, not Maggie. BUT, Maggie plays a huge leadership role in future issues so we’re stoked that the show’s already laying the groundwork. 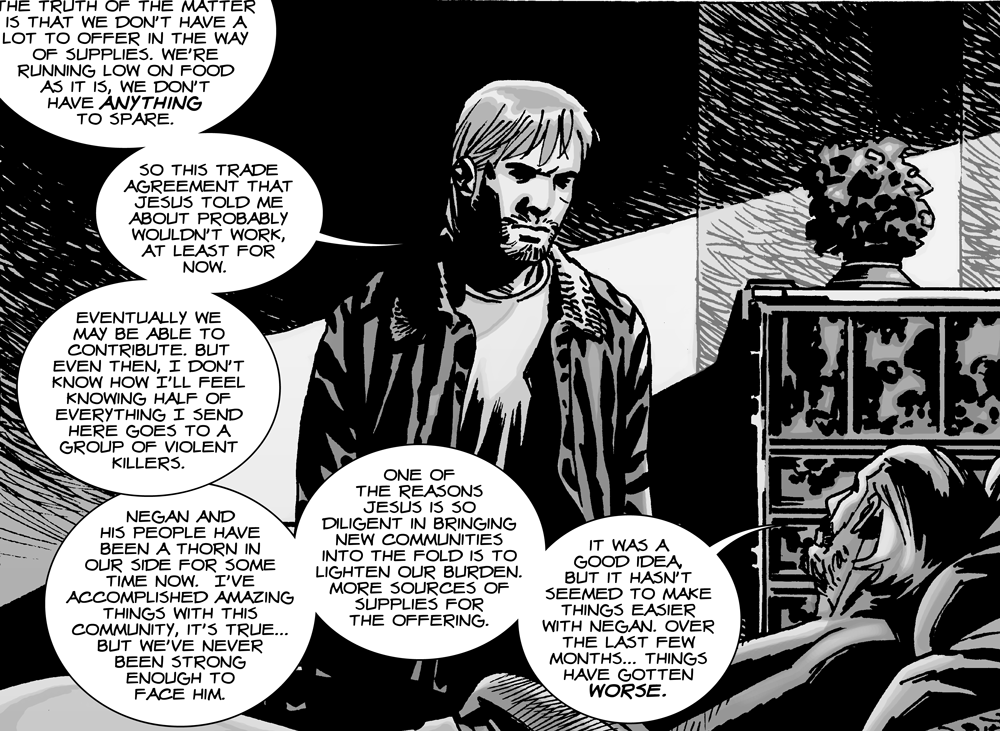 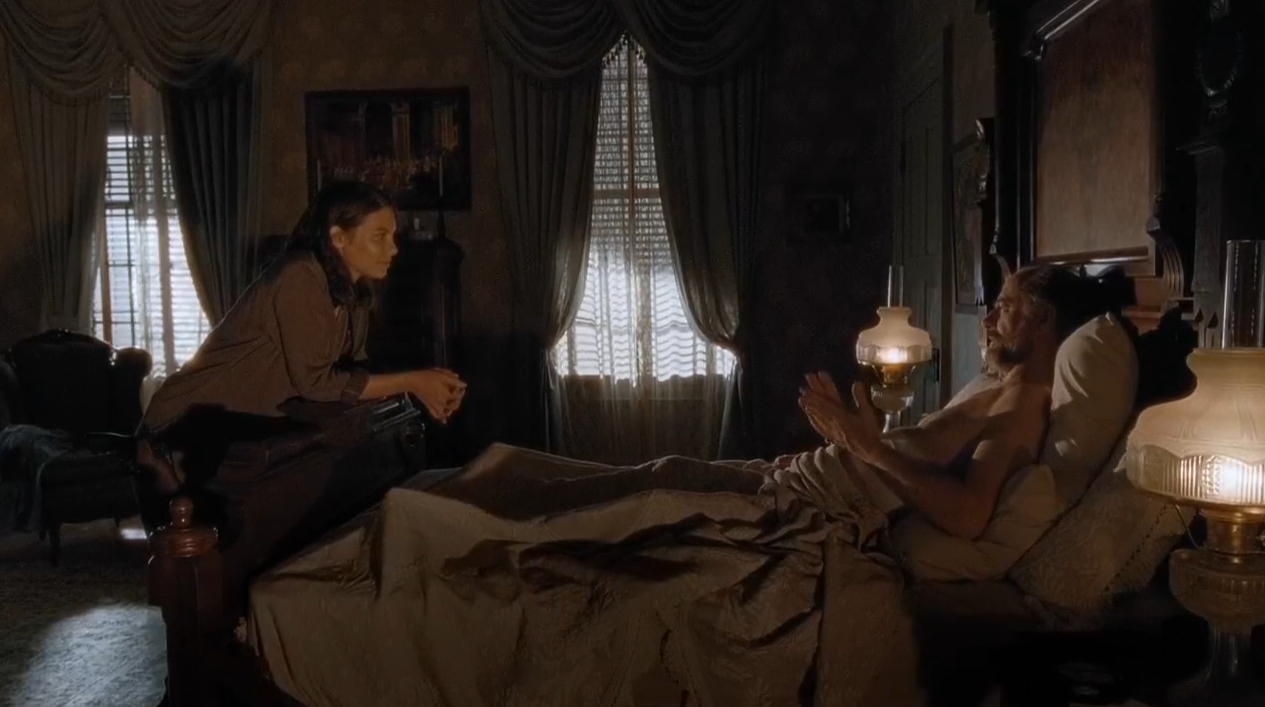 Rick Gets Hit By Karma

Technically Rick DOES get hit for killing Ethan in the show, but it’s immediately after the fact and by a woman. In the comics he attends Ethan’s funeral and predictably gets hit by one of his friends. (BTW who goes to the funeral of the guy they murdered?? Dick move, Rick). 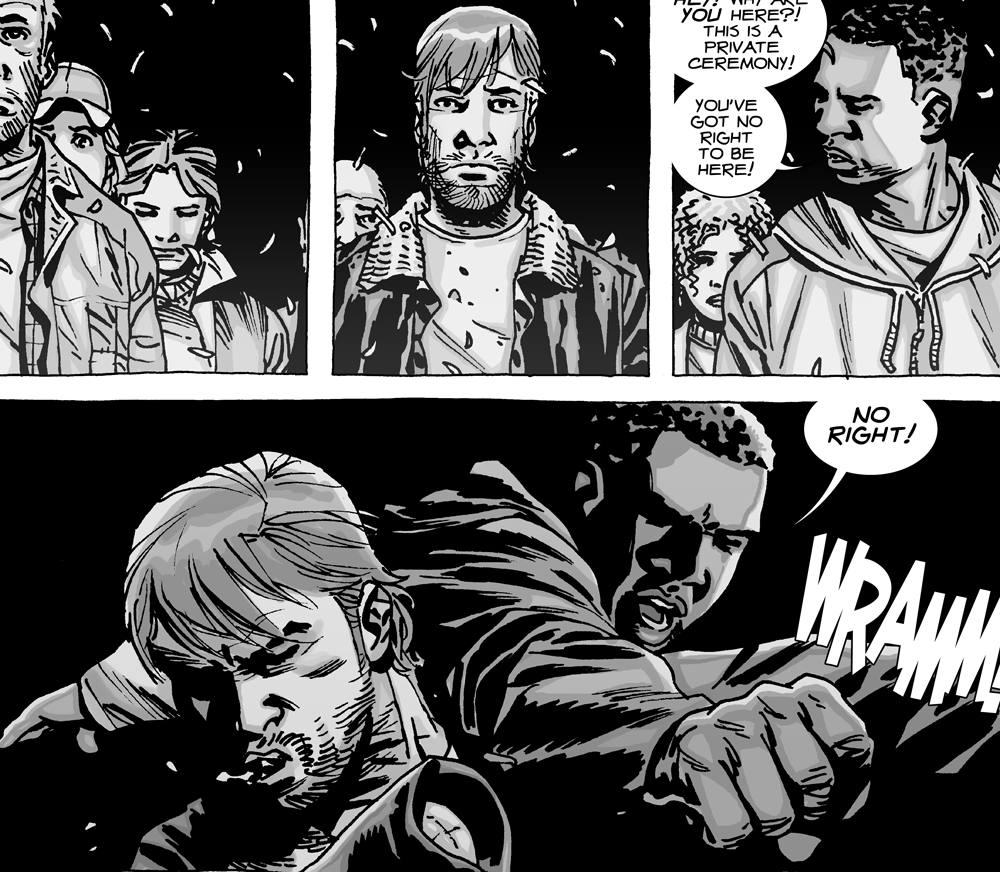 There you have it! Let us know YOUR favorite moments in the comments below.

What Can We Expect From Fear The Walking Dead Season 2