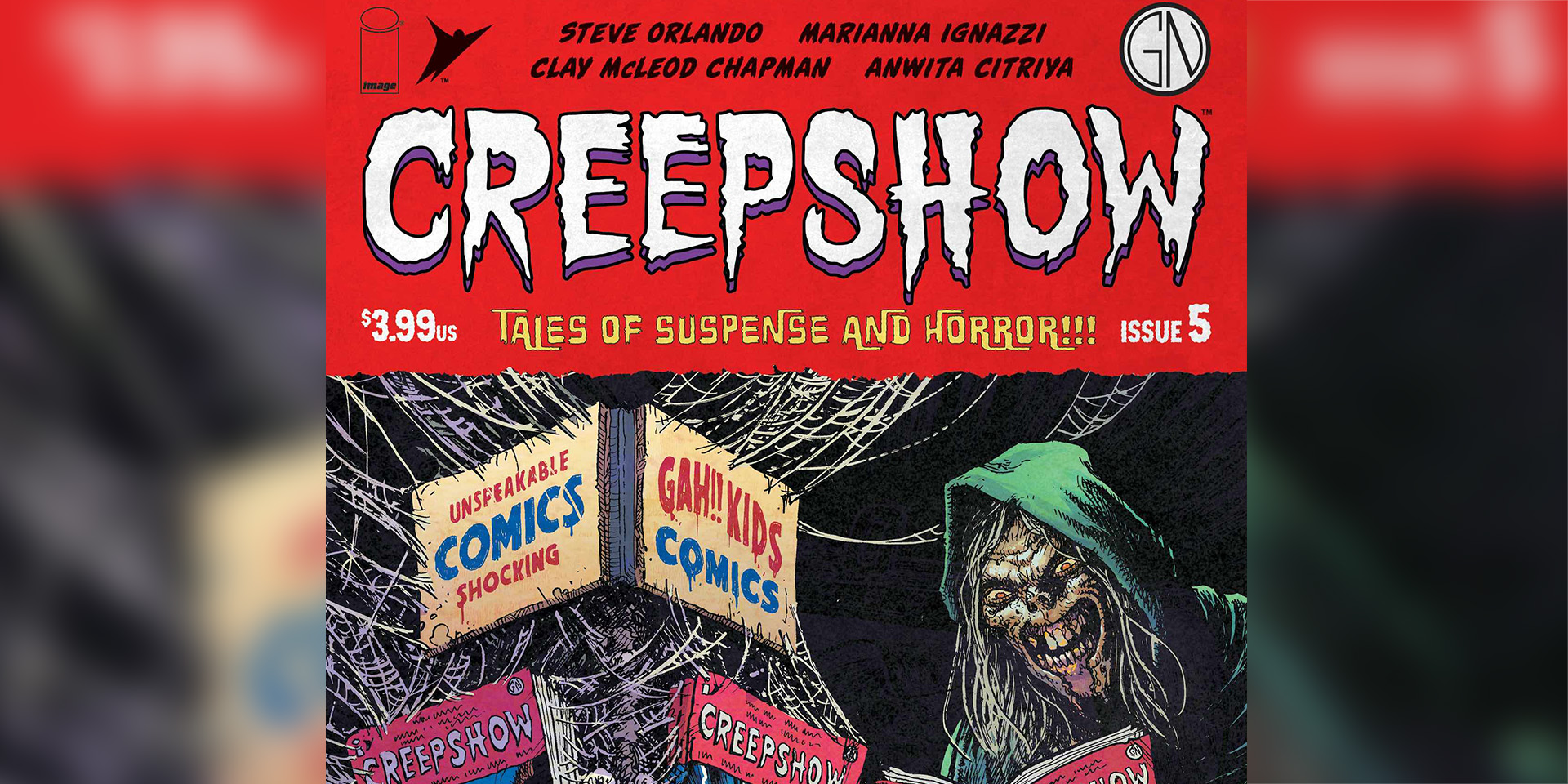 “Campy fun and chock-full of gore, the revival of Stephen King’s Creepshow comic is perfect for the new generation and this year’s spooky season.” – CBR

Today Skybound announced the star-studded creative teams and stories behind Creepshow #5, the final issue of the buzzed about five-issue comic book anthology based on Greg Nicotero’s hit Shudder TV series produced and licensed by Cartel Entertainment. Creepshow #5 will arrive in comic book shops on January 25, 2023.  The first issue of the series sold out immediately at the distributor level and returns later this month with a hotly-anticipated second printing.

First, Steve Orlando (Marauders) and Marianna Ignazzi (Buffy the Vampire Slayer) scare up a sensational yarn about a young man who’ll go to extreme lengths to retain his youth.

“Creepshow was a world I just had to step into,” said Steve Orlando. “For me, horror has always been at the core of some of our deepest, darkest, mythologies. Born out of our primal fear of the dark, whispered as illuminated oral histories to keep us close to the safety of the campfire. Horror has always been a beautiful lens to speak about the dangers of the moment, its obsessions, its toxicities, the up to date versions of those dangers waiting too far from the fire, in the dark, beyond moderation on the slide to excess and depravity. So, the chance to weave the present in with the iconic, horrific critiques of the human condition seeded long ago in Marlowe’s Faustus was an exciting one! In our Creepshow short, you can’t beat time and you can’t beat the devil…but maybe you can pit them against each other for just a little while longer.”

“Horror movies and horror books were a staple in our home when I was growing up,” said Marianna Ignazzi. “My older brother introduced me to them. I liked the suspense and the times that we needed to hold our breath, as if our breathing could affect the story.  So, when Alex Antone contacted me to work on Creepshow with Steve Orlando, it brought me back to the time when we were kids and crazy about all things horror. It is kind of thrilling to imagine that people from all ages might be holding their breaths too as they read this amazing anthology with my drawings on it.”

Then, Clay McLeod Chapman (Scream: Curse of Carnage) and exciting newcomer Anwita Citriya invite you to a debutante ball so horrifying you’ll be crawling out of your skin.

“Ever since I was a kid, Creepshow has traumatized me… from cockroaches to killer oil slicks from the film, to weretortoises and killer queen Beeyonces from the TV show…” said Clay McLeod Chapman. “It’s only fair that I now get to return the favor and contribute an all-new trauma for the Creepshow comic: Southern debutantes.”

“I’ve always found the period of transition into adulthood fascinating,” said Anwita Citriya. “An experience riddled with anxiety as we undergo physical and psychological changes. So, when I was invited to illustrate Clay McLeod Chapman’s beautifully grotesque tale about the centuries-old coming of age tradition, the debutante ball, I was beyond ecstatic! I hope our readers enjoy the story as much as I have enjoyed illustrating it!”

In addition to the main cover by Chris Burnham, Creepshow #5 comes with an impressive lineup of variant covers, including a cover by legendary artist Kelley Jones (The Sandman, Batman) and a 1:10 incentive cover by Vance Kelly.

Creepshow #5 (of 5) will be available at comic book shops and digital platforms including Amazon Kindle, Apple Books, comiXology, and Google Play on Wednesday, January 25, 2023.