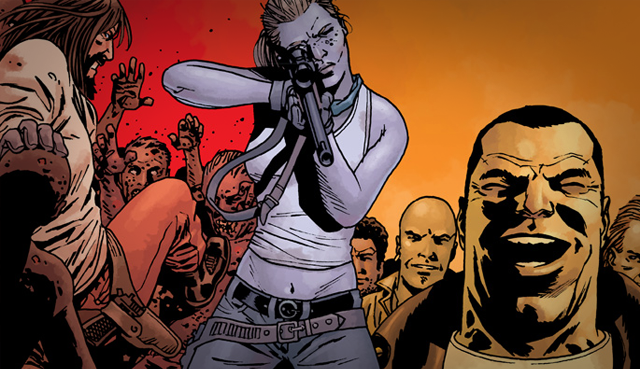 Robert Kirkman spoke recently with MTV about the shocking moment at the end of The Walking Dead #125 and Negan’s eventual introduction to the show! Warning, though, SPOILERS ahead if you haven’t read the latest issue!

MTV News: At the end of #125, we get something that was promised all the way back in issue #100, Negan gets his throat cut with a knife… Is that it for him? And where are we going next?

They’re going to lead into issue #127, which is going to be a really big deal. Everything about “All Out War” for me that’s exciting has been how it’s going to affect the stories going forward, and seeing this world evolve as people continue to live in it long term is really the main appeal to “The Walking Dead.”

This world is evolving in a big way, because of the things Rick and Negan are doing. We’re going to see that all take affect in #127. We’re following up our twice a month run on “All Out War” with a double sized issue. Issue #127 is 44 pages of story for $2.99.

So it’s going to be a very dense issue, which is certainly going to set the stage for what’s going to come through the book for many, many years.

MTV News: Rick gave this very nice speech at the end of #125 about how they can rebuild civilization, which stands in stark contrast to where Rick was during the fourth season finale of show, where it seemed pretty definitively stated that there’s no going back to the way things were…

Robert Kirkman: It’s two different points in the timeline. If you go back to the comic book from the era that’s now being adapted in the television show, that’s very much in line with what Rick’s mindset was back then.

But I do think it’s an interesting experience to watch the television show, and read the comic, and see just how far Rick has come, how much he’s changed over time. And where his mindset is now based on his experience.

Whether or not the show will get there exactly over the course of the next few seasons remains to be seen. We certainly do take liberties on the show. We can adapt things as closely, or as loosely as we like. That’s a product of them being in two different timelines… The comic book Rick is much farther into this world than the television Rick is.