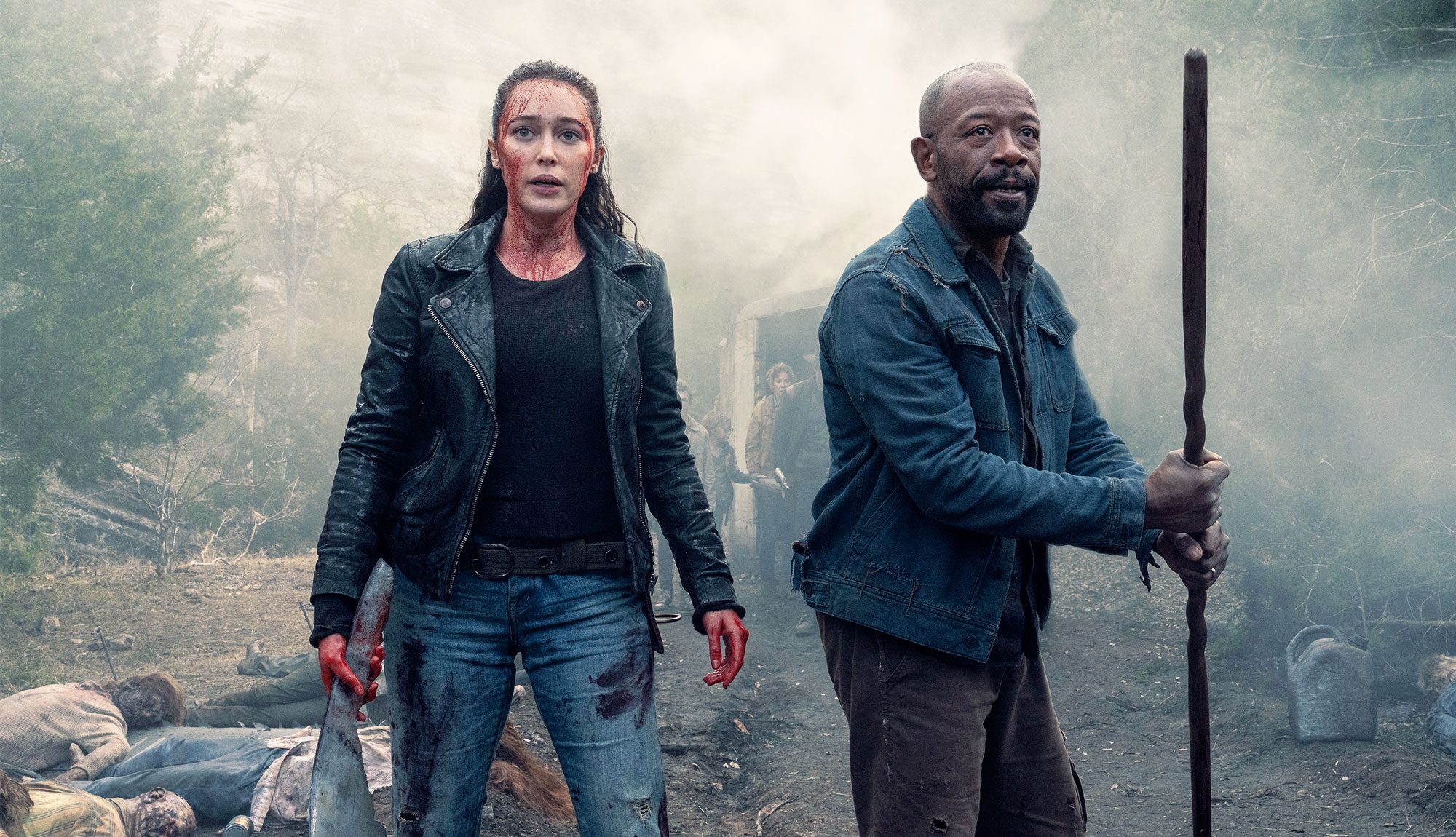 Two young boys named Dylan and Max get approached by a walker while hunting in the woods. Suddenly, a plane flies over and crashes overhead. They investigate the crash site and notice burning boxes with the ‘take what you need’ message scribbled on. Another walker approaches and is immediately killed by Alicia, who tells the boys to “get inside.”


Inside the plane, they find Morgan, John, and Luciana, who’s pinned by a pole. John leaves to find June as Morgan asks Dylan to help him save Luciana while he kills walkers outside. He tells them they got here after hearing a message on a radio. June and Al wake up in an overturned cockpit with walkers clawing at them from the windows. John shoots the undead as Alicia uses a propeller to take out the walkers. Morgan stops and says she needs to treat her hands, which are severely cut. She kills more as Morgan gets a radio message from a man named Logan. He tells him they’re on their way.

Alicia quickly hammers down a steel wire barrier around the crash site to slow down the walkers and give their friends more time. They take them out one by one as John frees June from the cockpit. Al radios Strand to tell him they crashed and instructs him to watch her tape labeled “Skidmark.” She explains the man on it has a small plane and he’ll have to use it to fly over to them. Back in the plane, June takes over Luciana watch while Alicia and Morgan continue to kill the walkers. Alicia falls into a downed fence with a radiation warning sign and warns the others they have to leave now, but June says they still need to stay and help Luci.


John and Al battle armored walkers to grab hacksaws, which they use to cut Luciana free. They place her on a stretcher and prepare to head out when a teenage girl in a van rolls up. Max says it’s their sister so they all pack in the van and leave. On the road, the girl says walkers are the least of their problems. “You have no idea where you landed, do you?”
Elsewhere, Strand and Charlie ride in Al’s armored truck side by side with Sarah and Wendall’s truck towards the others. Back in the van, the girl, Annie, says she stays away from this area but got stuck there recently. Morgan says they’re trying to help a man they met on the radio named Logan – apparently their place got surrounded. Annie stops the van and says the place is worse than it seems.
They arrive at a gate comprised of walkers chained together with their own intestines. The tree above them features walker heads hanging from the branches. Annie says they’re all over the area and she refuses to drive through. Morgan says they’ll walk and Annie reminds him he doesn’t even know this guy, but Morgan still wants to try. Annie warns he better be worth it as Alicia cuts down the fence and they ride on through.

They arrive at a truck stop to look for Logan but find no one, despite Logan telling them he was surrounded. With no sign of life, they carry Luciana inside as John and Al inspect the place. Morgan tries to reach Logan on the radio as Luciana tells Dylan about Clayton’s mission to keep hope alive with boxes. Alicia reports that no one’s here and that something must be up. Annie gets spooked and tells her brothers they need to leave now. Alicia tries calming them down when Max points his rifle at her and warns them to leave soon. The kids leave as June pulls the pole out of Luciana’s shoulder.

Elsewhere, an older man, Logan, arrives at the gang’s dam shelter. He sifts through Al’s tapes as if he’s looking for someone. Alicia and Al lock up the truck stop as Morgan finally hears word from him on the radio. He tells them things have gotten tricky, and that his people have taken over the dam and are looking at his people (Strand and the gang) outside the gates. He admits he never shared Clayton’s world view and he made them fly to the furthest truck stop he knew of so they could take over without the fuss. Alicia reminds him they crashed a plane to help him and Logan says he owns the deed to the mill and is just trying to reclaim what’s his instead of hurting them. He cuts off communication and walks away.
That night, Sarah and Wendall drink outside the dam and lament their failure. Charlie says she can find a way in and Strand vows to get the mill back. He wishes he was on the plane but vows to get on the next one. Elsewhere, Al tells Morgan they need to return to the plane to get a story and he agrees as long as she sees June about her head injury. June assures John they’ll find people but John says they might have better luck than others. June talks him down and says they need to make people believe they, too, can be lucky.

Alicia kills walkers outside to get out her frustration until Morgan stops her. She reminds him they could have died today and that Luciana almost did. “We can’t make up for the past if we’re dead,” she says before telling him her mother did so much to make sure they were still standing. Morgan promises he’s not done helping people and will try to find the kids again. “We’re still standing…and until we’re not we have to keep at it,” he says. Elsewhere, Strand pops in one of Al’s tapes…it’s Daniel. The frame pauses as Strand stares in disbelief at his old friend.

Al returns to the crash site in the rain to find the armored walker she fended off. She pulls off its mask, kills it and then starts recording. She picks through his stuff and finds laminated documents with a three-circled symbol on it. She radios Morgan to tell him there’s a story here until she’s tased from behind. She falls down unconscious as the mysterious person covered in the same armor stands over her.

What did you think of the Season 5 Premiere? Tell us in our comments!

The Opening Minutes of Fear the Walking Dead Season 5 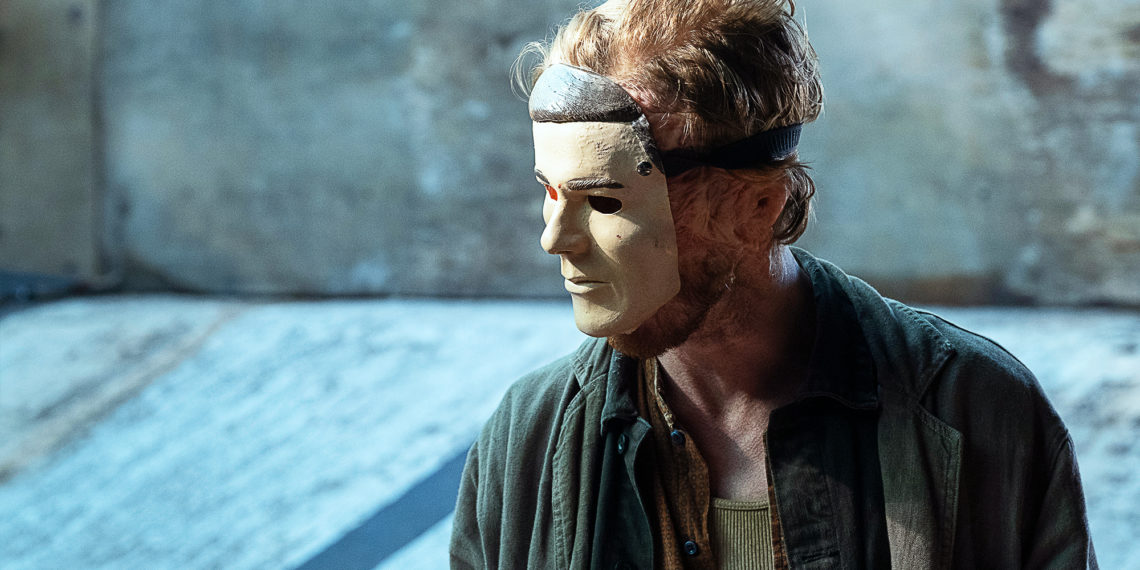