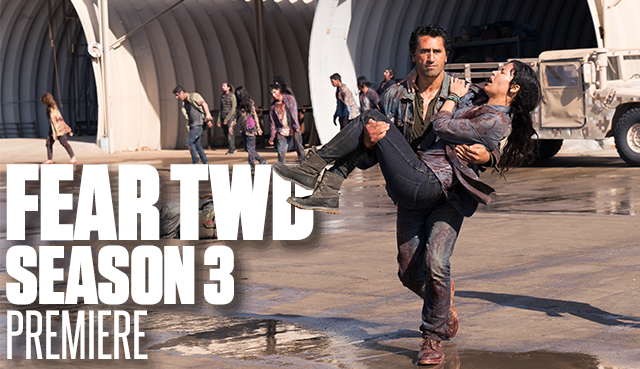 Season 3 Episode 1: “Eye of The Beholder”

Madison, Travis, and Alicia are escorted by soldiers into a military camp, where they’re separated. Travis is taken to a warehouse where he’s processed and miraculously reunited with Nick and Luciana. As he catches them up, Alicia and Madison get acquainted with one of the soldiers Troy, who Madison pleads with to help her find Nick. He refuses and leaves to conduct experiments on the dead. 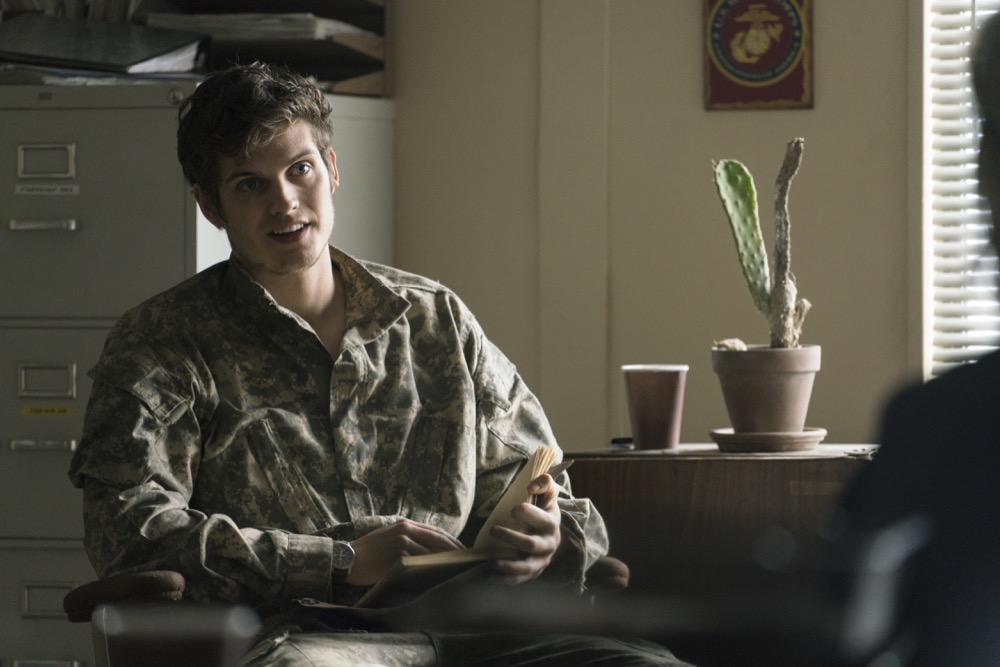 The soldiers take Travis and the others to a bathroom, where one of the prisoners is shot in the chest. The following day, Travis interrogates the soldiers about their ethics when they decide to take Nick for their next experiment. Travis volunteers instead and uses the opportunity to attack them. A walker bites a soldier while Travis and the rest escape.

Madison convinces Troy to help them escape when suddenly, they hear a gunshot outside and Troy runs off to investigate. Nick and Luciana make their way down a sewer while Travis gets re-captured and Troy instructs his men to take him out back. Troy returns to Madison and Alicia’s room where they attack him. Madison stabs him in the eye with a spoon and promises to cut it out if he doesn’t help them. 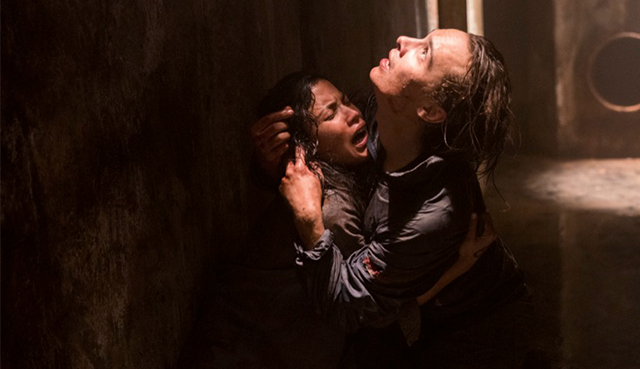 Nick and Luciana limp their way to the end of the tunnel, where they’re met by a horde of walkers and have to head back. The soldiers throw Travis into an infected pit where he stabs, bashes, and even punches the infected to death. The soldiers are impressed, but release more infected into the put. Madison holds Troy to spoon-point and demands other soldiers find her family. She releases him and Troy informs her of Travis’ whereabouts. 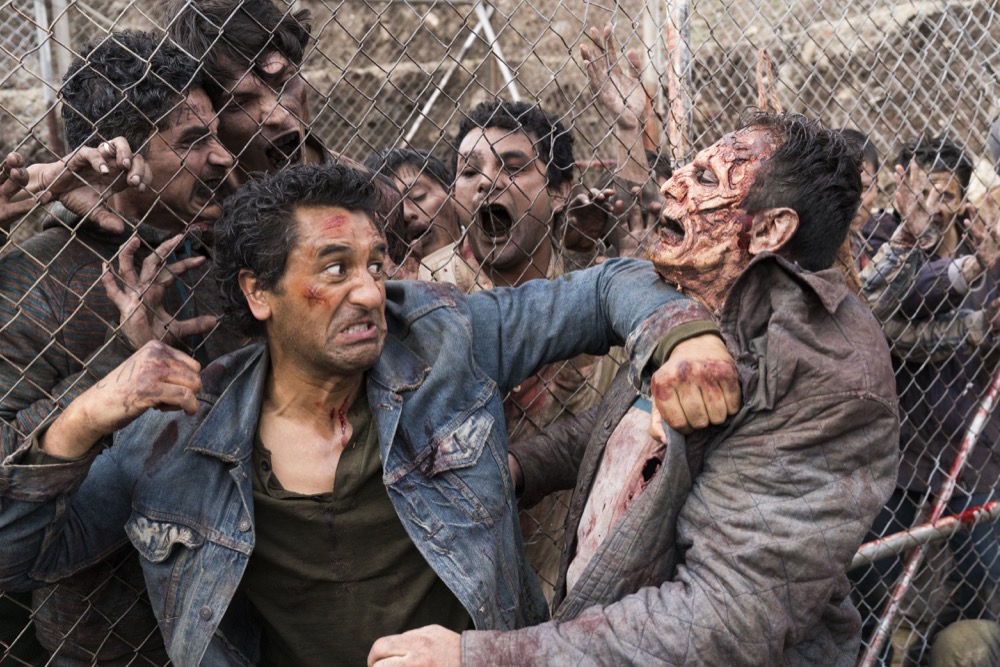 Alicia hears Nick getting attacked by an infected in the sewer and tries to help when she’s taken by soldiers. Thankfully, Luciana saves him. Madison arrives at the pit to discover Travis…alive. Alicia and Nick are then finally reunited with Travis and Madison…their first reunion in weeks. Later, Madison and Travis clean up and prepare to leave. 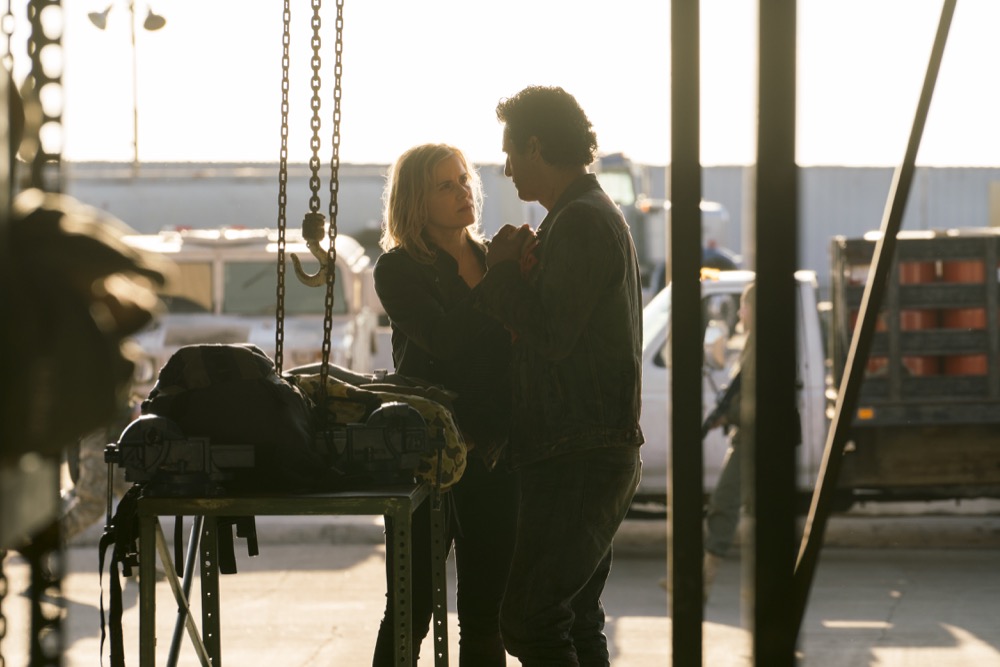 The walkers Nick and Luciana accidentally released overtake the depot. Madison becomes surrounded and Nick, Travis, and the soldiers rescue her. Travis, Luciana, and Alicia leave on the helicopter while Madison and Nick depart in the truck. Troy reassures Madison they’re all going to the same place as the helicopter with half of her family flies overhead. 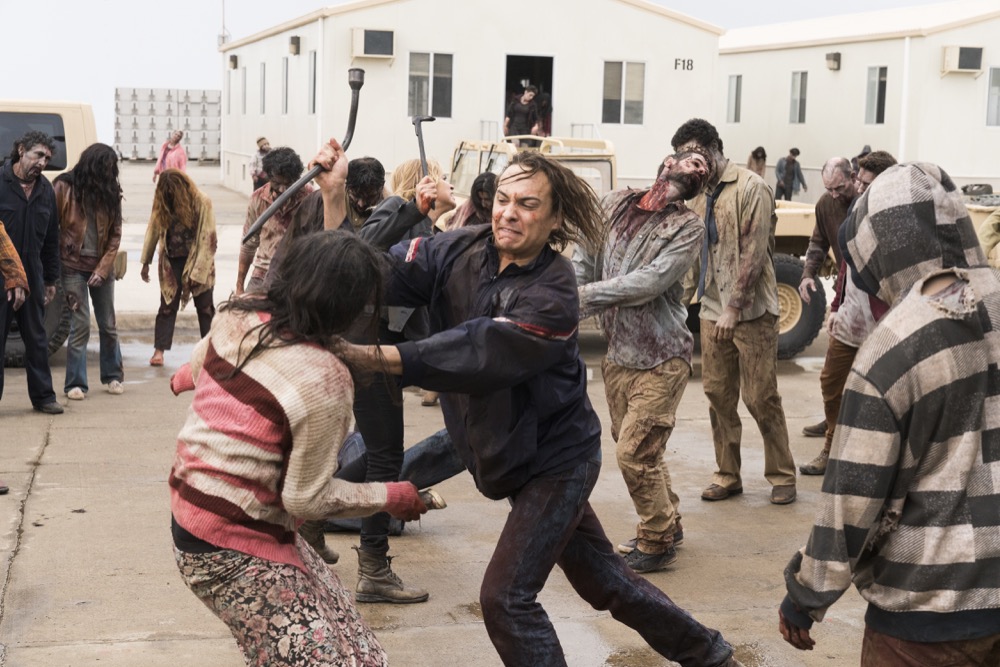 Travis, Alicia, and Luciana’s helicopter comes under fire and Travis gets hit by a bullet. His intestines pour out and Travis drops out of the chopper, falling to his death. The next day, Madison and Nick travel with the soldiers to an RV satellite camp where they discover the helicopter crew hasn’t arrived yet. Elsewhere, Alicia tends to Luciana’s wounds while the group plans their next moves. 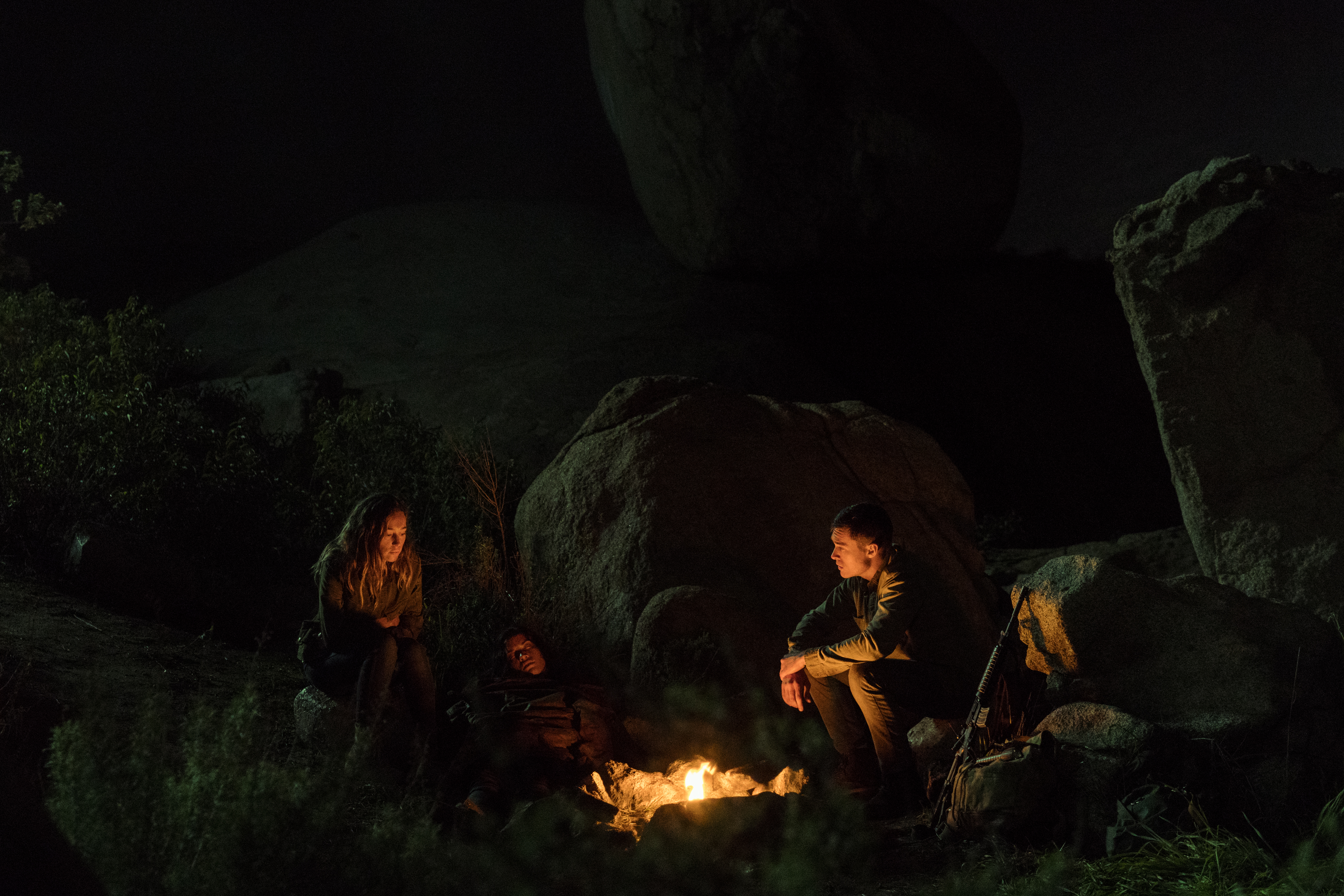 At the hotel Strand, who falsely professed to be a doctor, is asked to help deliver a baby. He panics but then relents. Meanwhile, Nick argues with Madison about making friends with their captors. Nick storms off and Madison’s introduced to Troy’s father, Jeremiah Otto, who welcomes them both to his ranch. 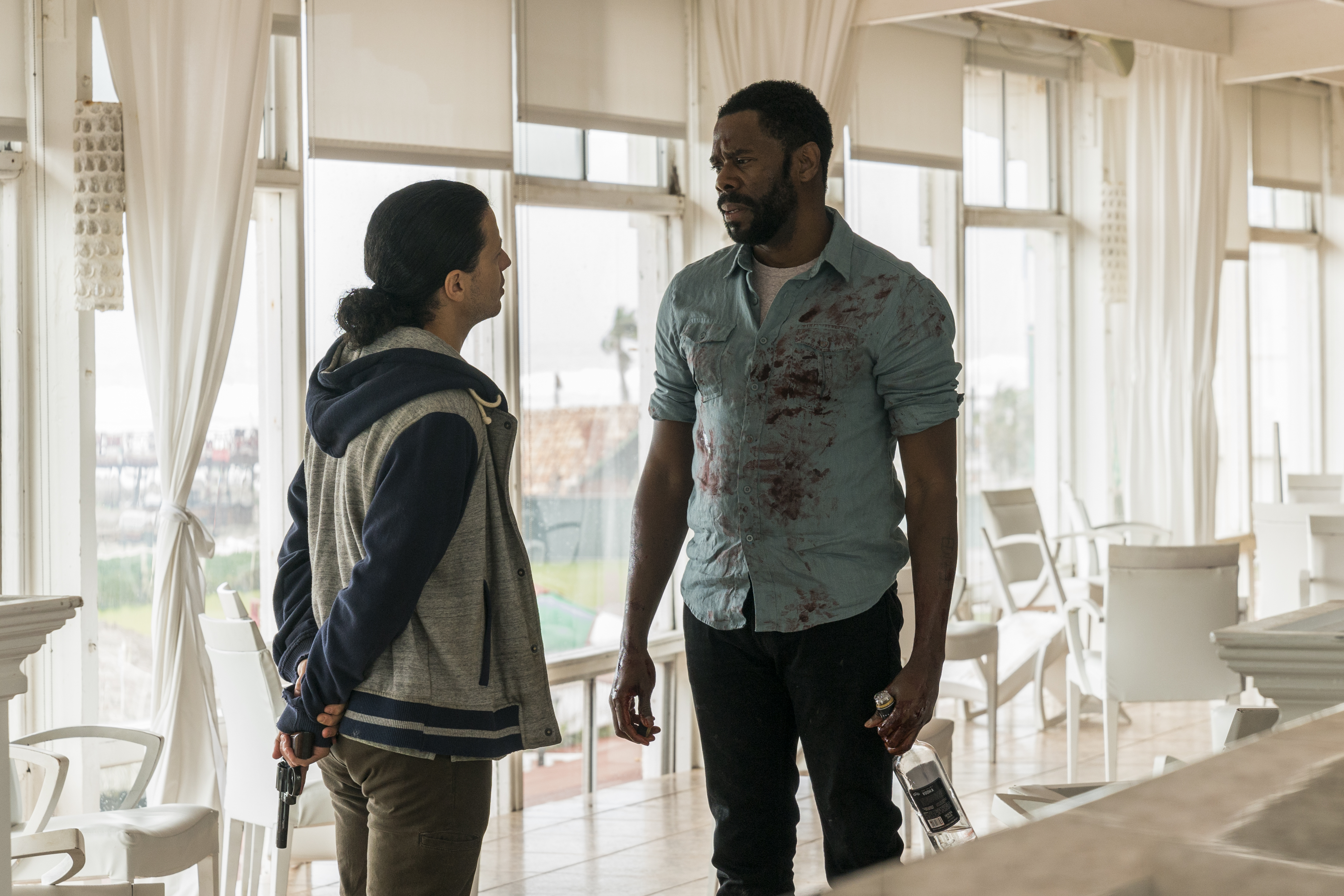 Jeremiah gives them the grand tour, informing them he’s building a new nation. He leaves and Nick voices concern to Madison about him being the father of a monster. She advises him to stow away his rage for later but he dismisses her. That night, Alicia, Jake, and Charlene discuss their families around a campfire until Jake’s attacked and Alicia has to save him. Unfortunately, she’s unable to save Charlene. 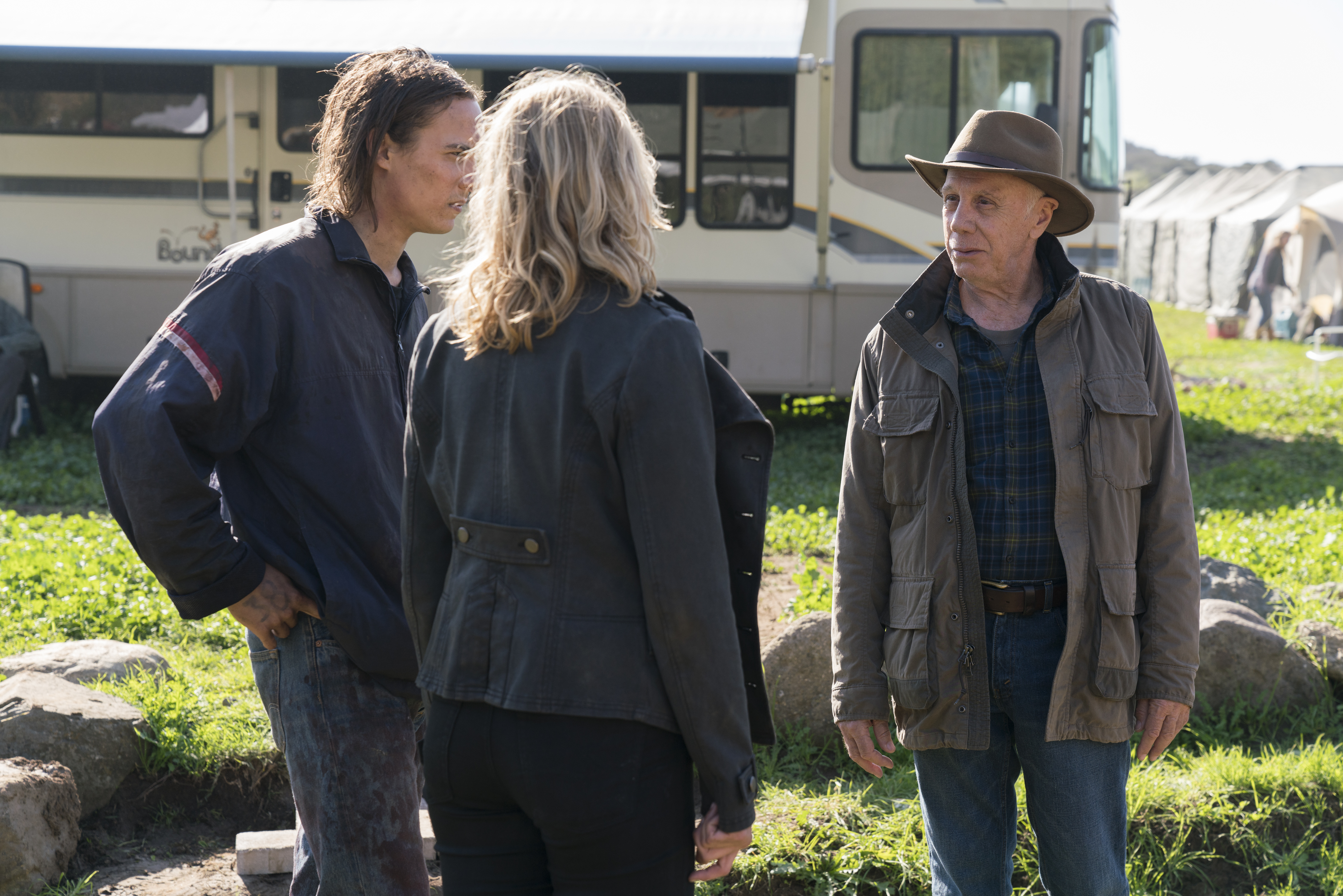 The next day Strand encounters Ilene (the one who stabbed him last season). Despite her manic state, Strand’s able to calm her down and they have a nice heart-to-heart about their past lives. Finally at peace, she hands him a gift and then jumps off the balcony (as one does).

Alicia and Jake carry Luciana to The Ranch, where Madison immediately greets them. Alicia’s forced to tell her about Travis while Nick runs over to tend to Luciana. Troy’s convinced Luci’s doomed so he takes his gun out to finish her, but Nick insists on doing it himself. He points the gun at Troy’s head and demands they let Luci in. Jeremiah finally relents and agrees to allow Luci in the infirmary as Madison takes time for herself to cope with her loss. Shortly after, Jeremiah consoles her while Nick consoles Alicia. 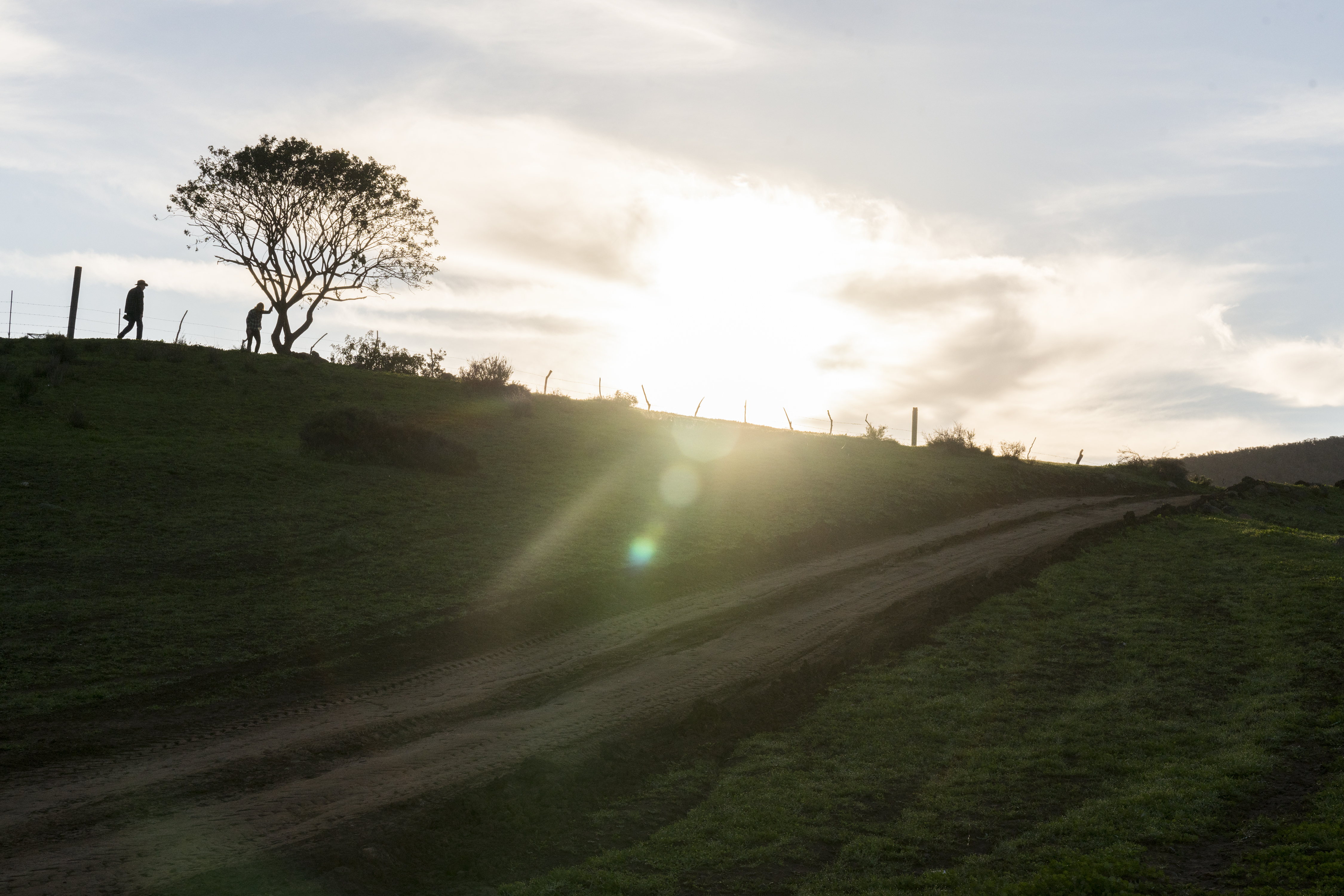 Elsewhere, Strand finds the car Ilene left him and uses it to leave the hotel for good. Madison informs Nick and Alicia her plan for them to stay at the ranch for now, even if it means they eventually have to overtake it.

What did you think of Travis’ demise? Where is Strand headed? And can Madison and the gang rebuild their lives at the Otto ranch? Tell us in the comments!

This Season on Fear the Walking Dead (Trailer)