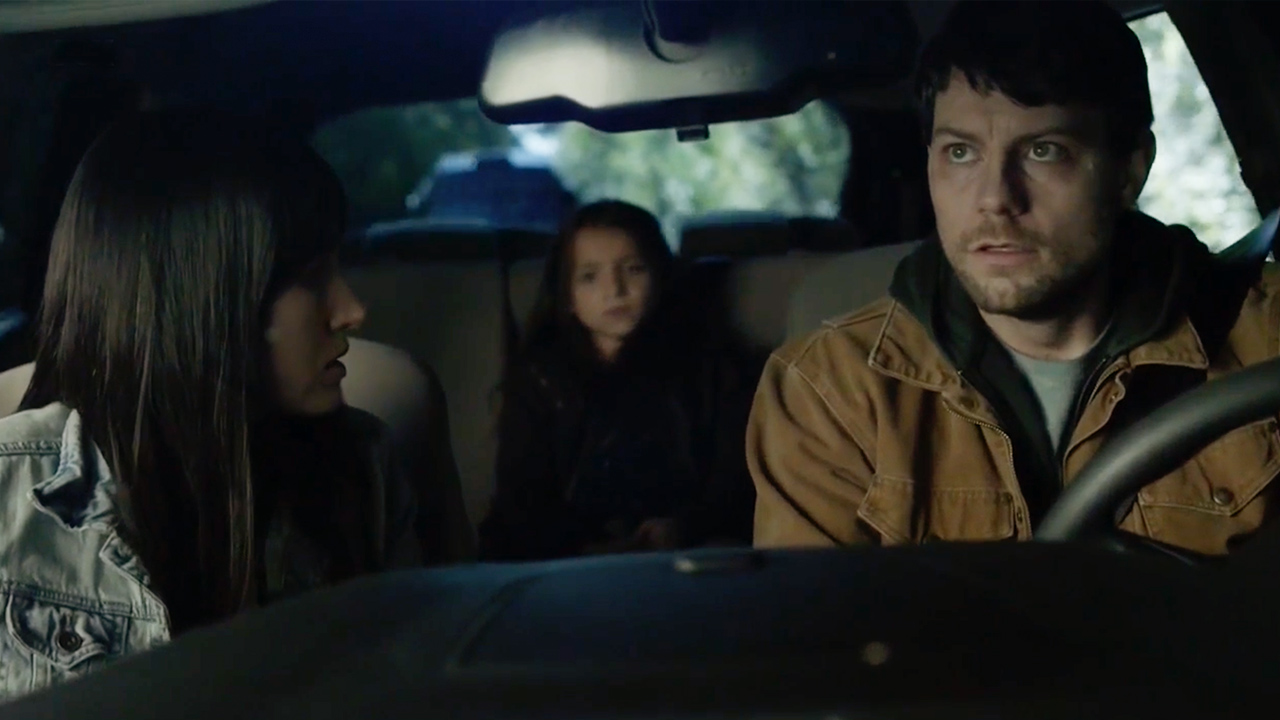 Kyle rushes into to his house still in his bloody hospital gown. Allison warns him he should lie down from the surgery but he tells her they have to leave now. At the morgue Dr. Park tells Sidney the dead kid will piss off the counsel, but Sidney chastises him for letting Kyle Barnes go. Park says the counsel is meeting today so he supposes they’ll both have to answer. Meg and Rev arrive at Kyle’s house just in time for him, Allison, and Amber to leave.

Later, Megan asks Giles how the demons work and if she’ll be possessed again. He suggests she check out the light house church to talk to people with similar experiences. On the road, Kyle tells Amber they’re headed to Montana where they won’t be affected any longer. A van speeds up behind them and Kyle assumes they’re chasing them. Allison says it’s nothing but Kyle reminds her how relentless these demons are.

Rev takes Megan to the Lighthouse – the congregation walk up and stare at her and Meg is freaked out. Meanwhile, Giles leaves a voicemail on Rose’s phone to tell her Kyle’s OK and to call him back. A cop then shows up at his door to ask if he knows anything about Evelyn’s murder. He says Chief Nuñez asked him to bring him in. Giles declines but the officer shows him a warrant.

Kyle takes his family to the junkyard and tells them to wait in the car. Bob jumps him and then stops when he recognizes him. Kyle asks to use one of his cars and Bob tells him that his father once tried the same thing. Kyle doesn’t care and asks again; Bob finally relents. At the jail the officer sits with Giles in his cell to have lunch. Nuñez walks in and asks if he always dines with murder suspects and the officer leaves. Nuñez locks the cell and threatens Giles and his family – saying he has a new life to look forward to.

Sidney arrives at the council meeting in a local diner. The members chide him for letting Kyle escape and the mayor to be murdered, but Sidney assures them Kyle and his daughter aren’t the only “resources” around town. He tells them he thinks Helen survived 30 years ago and almost brought on The Merge. They doubt him and warn he better find her soon.

The face you make when someone casually reveals they ate their boyfriend’s face.

Kyle and his family get stopped by road construction so they turn around and get stopped by the van following them earlier. Kyle veers off into the woods and come to yet another dead end. Allison suggests they go on foot. Kat Ogden shows up at the barn to look for Rose, who holds her at gunpoint. She shoots a warning shot so Kat attacks her. Rose gets badly injured but manages to push Kat off the ledge to her death.

Back in jail the officer tells Giles he believes his stories about demons and lets him out. On the road an injured Sidney gets picked up by a woman who offers to take him to the hospital. Meanwhile, the Rev follows Dakota into a cellar in the woods. He announces himself and Dakota tells him he shouldn’t have come. He then sees Sidney bloodied and tied to a chair.

In the woods Kyle and his family quickly get surrounded by Officer Nuñez and a bunch of strangers. Giles comes home from jail to find Rose covered in blood on their sofa. She explains it’s Kat’s blood and that she “had to.” He asks if she did the same to Evelyn and Rose nods. Giles tries calming her down as she reminds him she had to.

In the woods, Nuñez takes Kyle back to the road when a beeping truck flies down the road towards them. Nuñez shoots at it and jumps out of the way at the last second. Bob comes out with a shotgun and warns everyone except Kyle’s family not to move. Kyle rushes his family inside and tells Bob to move it while he stays behind. Amber cries as Kyle tackles Nuñez and puts her hand on her face, causing her veins to get black. Amber does the same with a construction worker who tries to pry them out of the truck. The man falls out as they drive away. Kyle leaves Nuñez on the ground and then walks through the crowd the opposite way down the road.

What did YOU think of the episode? Tell us in our discussion!